Effective Exit Trading Strategies: How to Exit Trades in Profit

In a previous article, we discussed the different types of stops and stop loss orders we can use if a trade moves unfavorably. In this article, we are going to cover a few different ways that you can exit trades when they move in your favor, i.e. take profit. There are no hard and fast rules regarding this, but there is one thing we do not want to allow for – a trade coming back to our entry point without having taken profit. 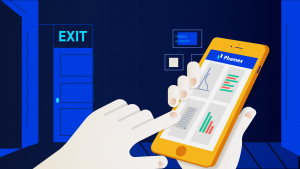 How you take profit can have drastic implications for how you perform in the long run. Some may even argue that how you enter trades is less important than how you exit them. For example, when a trader places a stop at their invalidation level, this level is not something that should change much. Taking profit, on the other hand, means not only being able to hopefully identify good “risk:reward” opportunities and execute on these, but to also be able to pull out at the levels that allow for maximum upside; depending on how conditions present themselves.

For the sake of simplicity, we are not going to go into nuance or get into any complex trading exit strategies. We will not be getting into partial exits, exits based on time, or manual methods. This is going to be a 101 level crash-course on taking profit for newer crypto traders.

How to use the Exit Indicators?

How does take profit work?

The first and most common method is to completely pull out of the trade at the first trouble area. For example, a trader will have an idea of where their trade is invalidated and where they are interested in exiting before a trade is placed.

Imagine we are between two intraday levels and the trader is looking to capture the span of movement between these levels. In this case, we can place a simple take profit with either a market order or a limit order to exit at this level. If we are scalping intraday, often we will be getting completely out of position at the next area of stickiness. This may be a technical resistance or support depending on whether this was a long or a short. This is the most common and least technical way of exiting a favorable trade.

We get out of the trade at the area we assume is going to give price trouble on the same timeframe that we used to enter on behalf of. By this we mean that we do not enter in based on a daily signal and exit at a 15-minute structure. To keep things simple, try to exit trades in the same timeframe you took them. Again, as you develop you realize there is more nuance to this.

The above method is good when price is ranging and between levels, but what if price is beginning to enter price discovery and we are uncertain of where the next sticky level is? In this situation one of the better tools to use is a trailing stop/ trailing take profit.

The trailing stop is going to follow the price by an amount that you choose beforehand, and can only move with price in the direction of your trade from the outset. Once price begins to reverse it will remain in the last position it was, only resuming to move once again when price continues back in the desirable direction.

In a strong trending market, or after a breakout, we can place a trailing stop that will follow price by a predetermined value. Initially, this value might be based on where our stop level was and may have a cushion of distance that is a derivative of the level of expected volatility. For example, price breaks out of a range and the trader places a trailing take profit that begins at the range break and trails price by 2x the Average-True-Range. What this allows for is the trader to ride the trend until the predetermined amount they permit it to reverse by is hit. Ideally, this stop is based on what is expected for the trend so that the trader is not taken out of the position prematurely due to noise.

The other method we will touch on takes into consideration both of the above. Imagine a situation where the conditions are very bullish, yet price has not entered a point of price discovery and is stuck between two levels. There are certain situations where we may place a complete take profit at the next resistance level only to have the level blown through. You can imagine how this might be frustrating.

Use A Triggered Trailing Stop

In the case where the context is very bullish (this can be the inverse for very bearish environments), Phemex offers a triggered trailing stop. This is the trailing stop with an “Activation Price”.

Imagine we have tested a resistance multiple times in what is a strong higher timeframe trend. In this situation, if we are long from support, we can place a triggered trailing stop at the next trouble area (resistance in this case). What this does upon being hit, is place a trailing stop by value of our choosing. Should this repeated test of resistance just blow through in this case, we are not taken out of the trade but instead now have a trailing stop that will follow through to capture any overthrow or trend that results.

These are just some of the more common ways you can exit a trade. As you can imagine, taking profit is not something that is “one approach fits all”. The performance of the method in which you exit trades, just like the methods in which you enter, should be recorded with your trading system so that you can carefully look back to judge objectively. As you can imagine, in theory, something like a triggered trailing stop may be great; until you have repeated trades where the trailing value is triggered and hit immediately, instead of moving further up. In this case, the return of the trade was harmed more than helped.