Traders use harmonic patterns as a form of technical analysis to identify specific types of price chart patterns. These patterns are used to predict future price movements of an underlying asset. Harmonic patterns can be applied to all types of assets, including cryptocurrencies. 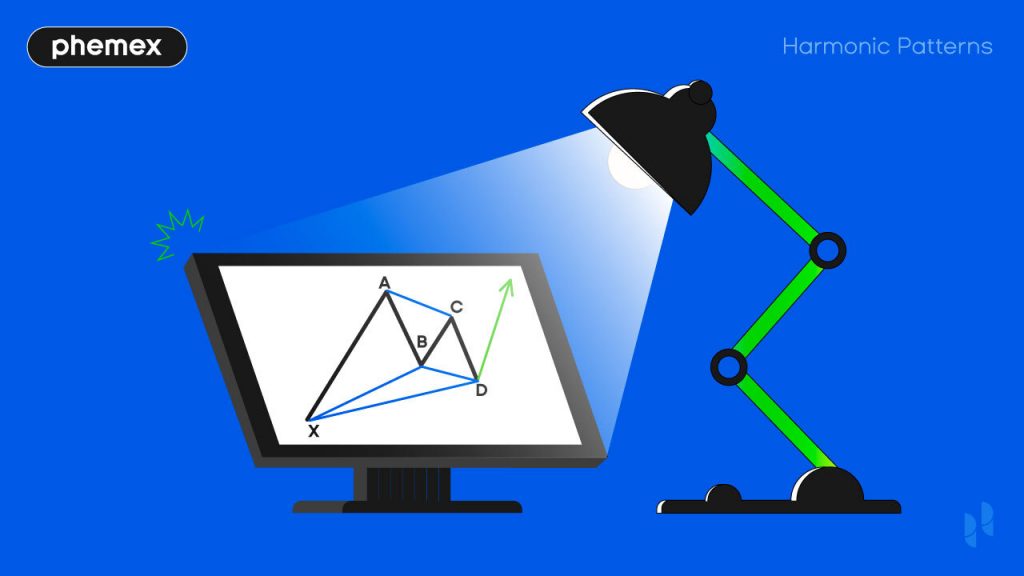 What Are Harmonic Patterns?

Harmonic patterns represent specific formations that arise frequently in price charts. They help traders understand price action and predict price direction. In addition, these patterns are used to identify trend reversal patterns so that traders can initiate a trade with a high probability of success.

Harmonic patterns represent various price action points of an asset, like a stock. These patterns are highly structured and rely upon the application of Fibonacci ratios. By identifying patterns of varying lengths and magnitudes, Fibonacci ratios can be applied to predict future movements of the asset.

The pricing movements of different harmonic patterns can have different Fibonacci ratios. Fibonacci retracements and extensions are used to identify potential reversal zones: where there is a high probability that the price will reverse.

Harmonic patterns rely on the Fibonacci numerical sequence and ratios that are derived from this sequence. The sequence starts with 0 and 1 and is generated by adding two previous numbers in the sequence to arrive at the next number.

Various Fibonacci ratios can be derived from this sequence. What is amazing about this sequence of numbers is how these Fibonacci ratios are present in many things in our daily lives and things throughout the universe, from their application to the human body, to galaxy formations, to architecture, and to DNA structures.

Traders use these ratios to predict price actions by applying Fibonacci retracements and extensions to pricing patterns that meet predefined criteria.

As illustrated in the figure on the left, a price pattern is represented by an initial swing or leg designated at XA.  From this swing XA, a retracement — leg AB — represents a minor pullback or change in the direction of the swing XA.

Fibonacci extensions — illustrated on the right — measure impulse waves in the direction of a trend. From the swing XA, the extension AB extends more than 100% of the length of the swing XA.

If the price then starts to increase and pushes back towards $200, this is an extension of the original price increase from $100 to $200.

Why Are Harmonic Patterns Important?

What Are Different Types of Harmonic Patterns?

Both the Bullish Gartley and Bearish Gartley patterns are illustrated below.

D is also a 0.786 Fibonacci retracement of swing XA.

Most harmonic patterns will reverse in direction after the CD leg. Here, the Bullish Gartley pattern predicts a reversal in a positive direction as illustrated by the blue “buy” arrow. This identifies a potential trade opportunity referred to as a Potential Reversal Zone (PRZ) or a Pattern Completion Zone (PCZ).

For example, point D is where a trader might consider entering a long position. Most traders will want to wait for some price action to confirm that the price is starting to rise. A stop-loss can be placed below the trader’s entry point.

In the Bullish Gartley, point D is where short positions could be entered.

Here we will look at the Bearish Butterfly harmonic pattern.

What Is A Harmonic Pattern Cheat Sheet?

These sheets illustrate various different harmonic patterns, both bearish and bullish versions, along with the required Fibonacci ratios between the various price swings and legs.

A Harmonic Pattern Cheat Sheet example is illustrated below:

What Is A Harmonic Pattern Scanner?

Scanners provide an accurate trade signal to traders as soon as harmonic patterns are recognized. Once a pattern is recognized, these tools provide easy to read and understand marked up charts and descriptions, labeling key price points and Fibonacci levels.

Some scanners include a dashboard that allows traders to generate a watchlist for preferred types of harmonic patterns.

One advantage of harmonic pattern scanners is that they can scan and review a large number of patterns quickly and can provide a ranking to identify patterns of higher interest.

What Are the Advantages of Harmonic Patterns?

These patterns frequently occur and have a history of being repeatable and reliable, thereby producing a high probability of success. Therefore, these patterns provide a clear structure for entry and exit points.

Using harmonic patterns removes subjectivity from trading. These patterns must match the harmonic patterns exactly to be a valid trading indicator. This can make trading straightforward: do the price movements and Fibonacci ratios indicate an identifiable harmonic pattern? If not, then other trading tools may need to be used.

What Are the Disadvantages of Harmonic Patterns?

The actual price points and calculated Fibonacci ratios often do not exactly align with the clear structure required by a given harmonic pattern. This can make the proper harmonic pattern difficult to identify.

In addition, it takes time for these five-point defined harmonic patterns to materialize. Some anxious traders may enter their trades early before all required price legs and swings are defined.

Harmonic patterns are exact in structure and exact in the relationships between price movements. This requires that the pattern show movements of a particular magnitude in order for the developing price pattern to provide an accurate reversal point. A pattern may begin to emerge that looks harmonic but if the specific Fibonacci levels do not align, the pattern will likely fail. Where the Fibonacci levels do align, patient traders can use this to their advantage to trade high probability entry and exit points.