Trading is like a game of chess. You make plans based on where you think the opponent will move, but things rarely work out precisely as planned. Markets move unpredictably, but that hasn’t stopped people from trying to predict them. From moving averages to Fibonacci retracement levels, traders use a host of technical indicators to stay on top of market changes.

Indicators are not an absolute representation of market sentiment and cannot accurately predict where the markets are always going. However, they do provide more insight and enable traders to visualize various metrics against a candlestick chart.

What is The Ichimoku Cloud?

The Ichimoku Cloud is a technical indicator that maps out support and resistance levels, identifies the prevalent trend’s direction, and gauges its momentum. It was designed to be a ‘one look equilibrium chart’ that allows traders to identify trends and signals within them quickly.

Referred to as a collective, the Ichimoku Cloud consists of five different plots; four are based on the high and low averages across a given period. When the two leading spans intersect twice, they form a space between them called a ‘cloud.’ 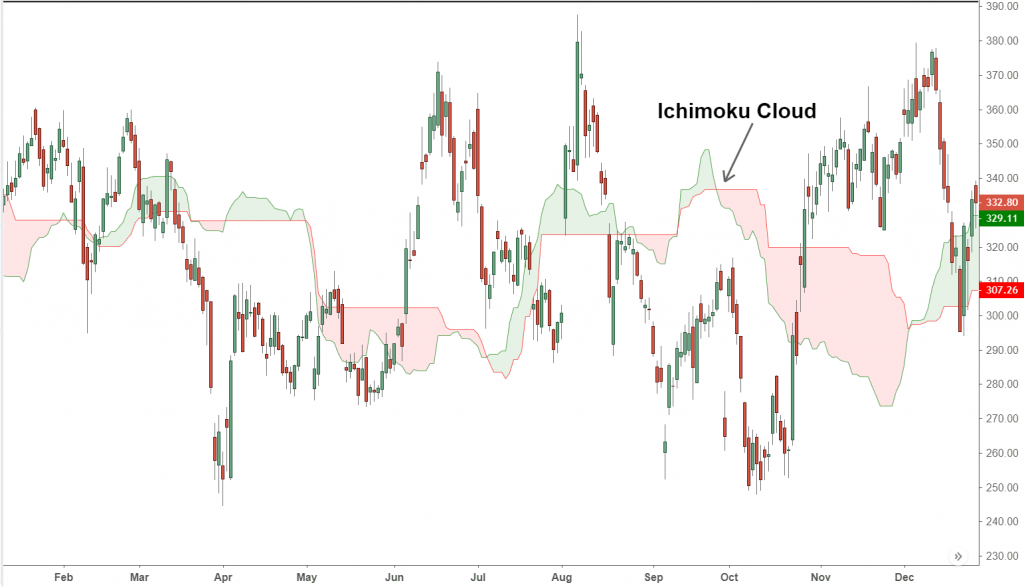 Depending on their position relative to the price line, these clouds provide a well-rounded prediction model for price fluctuations. While money and markets have existed for centuries, electronic computers are a comparably late addition to the space, and they have allowed us to move from using simple moving averages to more efficient indicators like the Ichimoku Cloud.

The origins of Ichimoku Kinko Hyo

‘Ichimoku Kinko Hyo’ or ‘The Ichimoku Cloud’ was created by a Japanese journalist Goichi Hosoda, in the late-1960s. The indicator seems complicated at first glance, and it is. Calculating the different plots used in an Ichimoku Cloud is only possible at scale using computers, and it provides far more data points than a regular candlestick chart.

When the price line is above the cloud, the indicator predicts the overall trend will move upward, and when the price is under the cloud, there tends to be a downward trend. The Ichimoku Cloud, despite its multiple components, is generally not used on its own. Traders use it in conjunction with other indicators to maximize profits against risk exposure, and it is often paired with metrics like the RSI (Relative Strength Index) and moving averages.

The indicator colors clouds between its plots in either red or green based on the two leading spans’ positions relative to each other. The clouds can also be used as regions of support or resistance that can be projected further in time, unlike static trend lines that do not adapt to an asset’s performance.

Each day, traders wrestle with the decision to buy, sell, or hodl their current assets. Cryptocurrency markets are infamously volatile, and this seemingly simple decision needs to be made carefully to ensure maximum profitability. While indicators can never be completely accurate, with some context and a broader understanding of the market, traders can get quite close.

How to Use the Ichimoku Cloud?

As mentioned above, five plots comprise the Ichimoku Cloud: Leading Spans A and B, a Conversion Line, a Base Line, and a Lagging Span. These plots use different calculations and represent various market information components, such as moving averages and period highs or lows.

Leading Spans A and B

The Leading Span A represents the Conversion and Base lines’ mean, measured using the average period highs and lows. The Leading Span B is calculated similar to the base and conversion lines, and the Lagging Span embodies the trend of the short-term historical closing price.

However, traders reference more prominent trends to fully utilize the Ichimoku Clouds, often presenting one scenario before completely flipping the script soon after. For example, an asset’s price may temporarily push into a cloud (or just above it) during a fierce downtrend before diving into an unprecedented bear market.

The Base lines in Ichimoku

Without noting the longer-term selling pressure, this could trick amateur traders into predicting bullish movements during an otherwise bearish market. Some traders profit from trading the crossovers between the Conversion and Base lines, especially when the price is moving above the cloud. This is often a strong signal to buy, but while crossovers are generally opportune moments to act, it isn’t always helpful to do so.

Moving averages in the Ichimoku Indicator

Moving averages are a critical component of the Ichimoku indicator, and traders generally use them to better describe past market movements hoping the asset performs similarly in the future. Like the Ichimoku Clouds, they lag behind the price, but the clouds can have a slightly predictive edge twisting through each new cycle.

Hosoda thought that price action and its extremes were more important than the smoothing data provided by short term simple moving averages. He drew this logic from the fact that price action marks not only key highs and lows, but also ‘turning points’ where a lot of money is on the line. It essentially characterizes the key points at which traders enter or exit the market.

Ichimoku’s Conversion Line vs. The Base Line

Since the Conversion Line does not use average or closing prices, it can also mirror the price better. This line’s angle can also present subtle differences against moving averages, and the sharper the angle, the stronger the trend. Flatter lines generally represent slower momentum.

While the Conversion Line can be used as a sort of ‘first line of defense’ against a trend, it’s better utilized in gauging momentum, though its reversal can signify a weakening of the overall trend. The Base Line also shows the trend for a particular period and is designed similar to the Conversion Line. It uses price action and period highs and lows with different intervals for the moving averages.

In essence, it was created to measure the highest high and the lowest low over the last month. If it climbs sharply, the price observes gaining ground over the previous month, while flatter Base Lines show the midpoint of the monthly price range.

The Base Line is also considered a more reliable gauge of price action due to its longer interval. It can also function as a stop loss for traders already within the correct trend direction. With information from the 9, 26, and 52-day moving averages, the chaotic mess of Ichimoku plots on a chart can show traders favorable positions and potential targets in mere seconds of looking at the chart.

The Leading Spans A and B incorporate simple moving average trading strategies, and Span B even tends to draw the 50% Fibonacci level ahead of time, which can be used as an entry point. Traders also use the indicator to determine the potential for trend reversals and trend stagnation.

Flat Ichimoku cloud patterns symbolize common price targets, and while long-term investors can use this to predict market movements and detect trend reversals, day traders can also use them to snatch some extra gains. More often than not, price lines tend to move through zones in which the cloud changes form.

While this isn’t the case every time, it’s a fair bet to make once in a while, especially in cryptocurrency markets. Thin clouds are also a good sign of momentum, and the clouds increase in size is generally a signal that momentum is slowing.

The Best Indicators to use with Ichimoku Clouds

A volume indicator confirms this, and Ichimoku Clouds also partner well with indicators like RSI, MACD (Moving Average Convergence Divergence) Histograms, and the full stochastic oscillator. While the clouds have great utility in trending markets, traders can’t use them in ranging markets as the cloud swaps between red and green too often.

Ranging markets are those in which the price of an asset makes the same highs and lows three or more times, and in these cases, the Conversion Line smoothens to keep up with the price. The standard Ichimoku indicator uses the 9, 26, and 52-day moving averages, with 9 days representing a week and a half of trading, 26 is close to the number of days in a month (minus Sundays), and 52 denoting two months of trading.

Unfortunately, this isn’t as effective with trading cryptocurrencies, where the markets are open 24/7. For crypto markets, traders generally use the 20, 30, 120, and 60-day moving averages. The 20-day moving average accounts for the low volume on Sundays and the others represent months of trading.

How Accurate is the Ichimoku Cloud ?

Trading the Ichimoku Cloud isn’t a guaranteed win and involves considering several factors like time frames, previous crossovers, angle of the cross, and other overarching long-term elements at play. As is the case with any lagging indicator, the Ichimoku Cloud represents past information, and past performance isn’t always indicative of future execution.

A less discussed component of the Ichimoku indicator is the Lagging Span. Known to some as the ‘Chikou Span,’ the lagging indicator is usually plotted 26 days behind the latest closing price and represents how accurate the Ichimoku indicator has been over that period. It also allows traders to visualize the links between current and past movements and spot trend reversals. An upward-moving Lagging Span can be a strong signal of a rising trend.

As mentioned earlier, flat clouds can be useful as price targets, but they indicate indecision and potential weak trends. It’s essential to be careful around these levels. Thicker clouds tend to confirm the observed trend and are generally safer regions to trade in.

However, the Ichimoku Cloud is known to provide the occasional false signal. After all, it is just a set of moving averages offering the price at various support and resistance levels based on past performance. Sometimes the indicator’s signals can appear later than expected, and these anomalies cannot be predicted or replicated.

Indicators only provide a structural idea of how markets act, and it’s up to the trader to decide where to reel in profits and how to control risk. The Ichimoku Cloud can be useful, especially for newer traders who need help spotting trend direction, finding entry points, momentum, and detecting reversals, but it’s far from the holy grail of day trading.

Trading may be like a chess game, but where chess has you play against one opponent, trading has you play against the entire market. The complex multi-colored web of lines that dominates trading charts can seem daunting, but a better understanding of its features can be extremely valuable in grasping how markets behave in different circumstances and why.

← Buy The Dip in Bitcoin: The When and How-to Guide
How to Trade with The Fibonacci Retracement Levels →
About