What is Tezos (XTZ): The Self-Evolving Blockchain 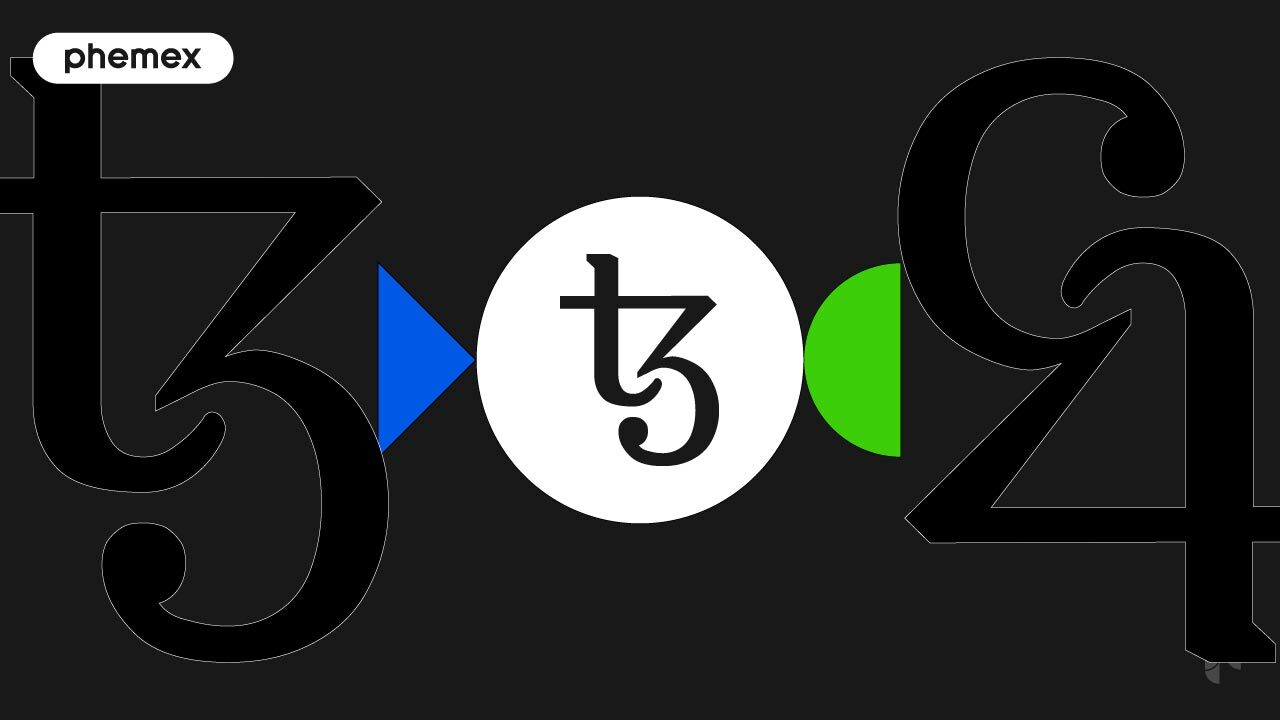 Tezos is an open-source Layer 1 blockchain network that competes with other leading blockchains such as Ethereum to resolve existing limitations such as slow processing times and high transaction costs.

However, here is its differentiating factor–Tezos aims to solve contentious disagreements through a self-evolving governance model, as opposed to a hard-fork governance model which is what many other blockchains use (this is why there are hard forks of Bitcoin such as Bitcoin Cash and of Ethereum, such as Ethereum Classic). Hard forks can be inefficient as it disrupts the network effects that the blockchain has formed over time, is expensive, divides the community and alter stakeholder incentives.

On Tezos, holders of the network’s native coin, called tez or tezzies (XTZ), can vote on all system upgrades and changes. Anyone may become a validator and contribute to the network’s operation by making a security deposit of XTZ coin.

Held in July 2017, the high-profile Tezos ICO raised 65,681 BTC and 361,122 ETH (worth $232 million at the time) from a large number of participants, who received 80% of the initial XTZ coin supply; it was the largest ICO at the time. The other 20% was split into equal shares between the Tezos Foundation and Dynamic Ledger Solutions, the company formed by Tezos’ co-founders.

Tezos’ native cryptocurrency, XTZ coin, currently trades at $3.72 with a circulating supply of 756.2 million coins, for a market cap of $3.26 billion.

How Does the Tezos Blockchain Work?

Tezos functions through a proof-of-stake (PoS) system, which allows any user to become a validator by setting aside (or “staking”) a small portion of their own Tezos coin. Tezos, however, uses its own version of proof-of-stake called liquid Proof-of-Stake (LPoS), whereby stakers can unlock their stakings anytime. In Tezos, stakers are also called “bakers.” The Tezos blockchain supports a maximum of 80,000 of “bakers.”

As such, Tezos can rightly claim to be more inclusive than most PoS platforms. Tezos is popular among stakers, with around $2.7 billion worth of XTZ staked at the time of writing and ranking #7 on the list of staking platforms.

Its low barrier to entry, and high upper limit on the number of active bakers ensures a comparatively varied and dynamic validator set. This voluntary delegation process is different from normal PoS, where delegation is a requirement to elect validators, and essential for a system to remain properly decentralized.

There are minimum requirements to be a baker—first, you must stake 10,000 XTZ tokens. Holders of XTZ who want to participate in governance but don’t want to become a baker themselves can delegate their stake to a baker, who can use it as part of their 10,000 XTZ. However, a delegator doesn’t have to relinquish custody of their XTZ to participate in delegation.

Holders of XTZ who want to participate in governance but don’t want to become a baker themselves can delegate their stake to a baker, who can use it as part of their 10,000 XTZ. A delegator doesn’t have to relinquish custody of their XTZ to participate in delegation. It is important to remember that XTZ holders who let a baker use their stake also delegate their voting rights to that same baker.

Blockchain governance is a complex and hotly debated topic. While the operational side of running a blockchain is generally agreed upon, the process of upgrading the network and implementing changes to the core software is often performed off-chain.

Off-chain processes are blockchain-related processes that occur outside of their in-built system; making them all but impossible to independently verify. Such off-chain processes cannot be followed by a platform’s users, lowering overall network security and transparency, and potentially engendering mistrust.

In contrast, Tezos is one of the few platforms that utilizes 100% on-chain governance. Any baker can make a proposal for protocol changes and, if it achieves agreement by a supermajority, it will be automatically implemented. This model has been successful in solidifying the security of the Tezos network; by reducing the amount of bugs in the contract code. However, on-chain governance does come with some risk of voters forming cartels to influence the outcome of any particular decision. Therefore, the debate regarding on-chain versus off-chain governance continues.

How Can Tezos Be Used?

Tezos uses its platform to house DeFi, gaming, NFT and other applications. According to the Tezos Project website, there are currently over 120 projects affiliated with Tezos. Some of the more high-profile ones, such as Coinbase Custody and the Swiss Sygnum bank, provide XTZ staking services to institutional clients.

There are also several projects for listing security token offerings using Tezos, including BTG Pactual, the largest investment bank in Latin America. In addition, Tezos is emerging as a low-cost competitor to the Ethereum blockchain network for non-fungible token (NFT) issuers. The company has even been working on NFT projects with Ubisoft, a big name in the video game industry.

What Is the Tezos Wallet?

The Tezos wallet is the Tezos network’s crypto storage tool that can be used to store both the Tezos coin, XTZ, as well as most other major coins on the market too. This had led a large number of users to adopt the Tezos wallet as their principal cryptocurrency wallet. You can see a full list of the Tezos wallet’s capabilities, and the new features in its latest update, by accessing the Trust Wallet community website.

Who Is Behind Tezos?

Tezos was founded by husband-and-wife team Arthur and Kathleen Breitman. Arthur Breitman is a computer scientist and mathematician, while Kathleen has a background in finance.

Arthur Breitman wrote the initial Tezos white paper under the pseudonym L. M. Goodman. At the time, Breitman claimed that Bitcoin lacked a proper form of community governance and excluded the vast majority of participants from having a say in the dominant cryptocurrency’s development. At the same time, he also found the inability to issue new tokens through the Bitcoin protocol to be problematic.

The duo then began the coding work for Tezos cryptocurrency and Tezos coin. Afterward, the Tezos Foundation purchased the startup—securing the intellectual property previously owned by the latter.

The project fell into jeopardy after the Breitmans appointed one of their previous acquaintances, Johan Gevers, to the position of President of the Tezos Foundation. Relations turned sour, and Gevers took control of the Foundation and refused to disburse funds, causing significant upset among investors. Eventually, Gevers left the Tezos Foundation, and the project was able to restart and eventually launch.

Since its launch, XTZ price performance has been, at best, shaky. The Tezos ICO price was initially just over $3.90, though this plummeted almost immediately. This was likely due to the inordinate amount of controversy surrounding Tezos at the time it held its ICO. By 12 November 2018, less than four months after its initial release, XTZ’s price was at an all-time low of $0.36, representing an enormous drop in Tezos’ value. While the price recovered slightly, it followed the same trend over a year, not reaching above its original price until 10 August 2020.

Before the end of August 2020, XTZ’s price had again dropped significantly below its ICO. Falling all the way down to $1.95 by late September, Tezos’ coin again took its time to recover; although, this time, it was likely more because of issues suffered by the crypto market as a whole, rather than through any fault of Tezos themselves as a company.

While this has not remained the case, XTZ’s price has actually weathered the storm of the 2022 mini crypto crash remarkably well. Its price currently sits just below its ICO, at $3.67, and it would seem that Tezos and its XTZ coin have somehow inserted themselves into the conversation for emerging digital currencies that are likely here to stay. 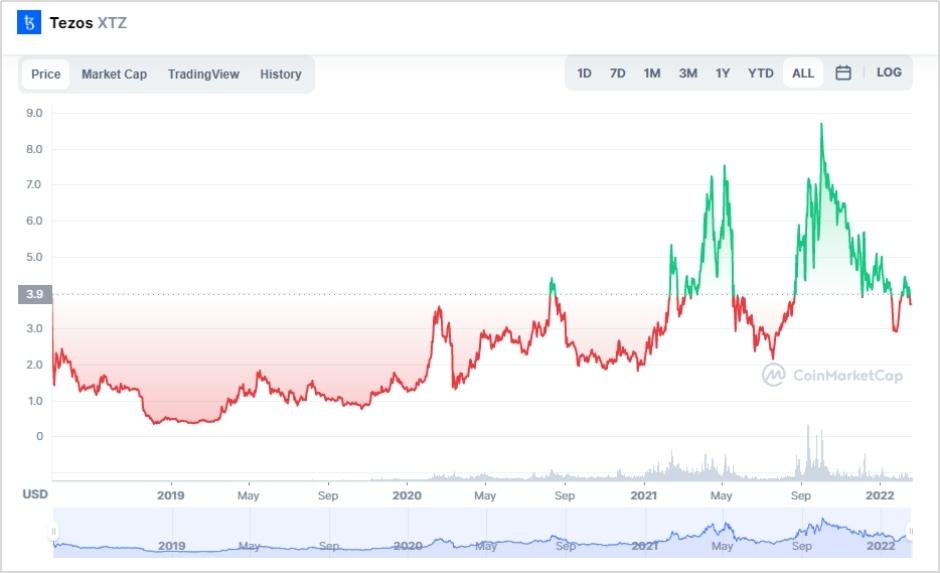 What Is the Future of Tezos and XTZ?

The future of the entire cryptocurrency industry is slightly uncertain at the moment, and this is no less true of XTZ than any other altcoin. The platform must begin to put a reasonable amount of its funding into development, and continue optimizing. If it can do this, there is no reason why it can’t lift itself up from the hard times it has experienced and begin benefitting from the increase in adoption many are predicting the crypto market will experience in the future.

Where can you buy and store Tezos?

Tezos is available on most major cryptocurrency exchanges, such as Phemex.

While Tezos has had quite the rollercoaster ride, it continues to rank relatively highly compared to the competition. Currently, the biggest challenge is for it to gain traction among decentralized application (DApp) developers and users in the same way it has caught the attention of stakers. If it can overcome this challenge, it’s likely to hold a solid position in the blockchain ecosystem of the future.