What is Oasis Network (ROSE): The First Privacy-Enabled Blockchain Platform for Web 3.0 How often do you click “accept” on a website unwittingly? In this modern era, personal data has become a valuable commodity, and surprisingly, we are giving our data away for free without even noticing it. Our data is copied, sold, and transferred between firms and platforms without us knowing it.

A particular data point that otherwise remains on your device, once given away, will fuel Facebook’s ad algorithms or get snapped up by data brokers. Once sold to other third parties, it gets collected and stored on centralized computers which then poses a security risk of failure or malicious attacks.

Now imagine a world where you can fully control your online personal data–and freely grant or withhold access to it–while earning an income from the data you share with businesses. This is what the Oasis Network (ROSE) crypto project aspires to achieve.

At the moment of writing, the ROSE token trades at over $0.045 per token with a circulating supply of 5.03 billion for a total market cap of more than $226.35 million.

What Is Oasis Network?

The Oasis Network is a privacy-enabled, Layer 1 blockchain platform created to restore control and ownership of data to users through confidential smart contracts that keep data private while it is being processed.

Confidentiality unleashes a range of new use cases on the blockchain, enabling users to share their data–and earn from it–while benefiting from online services. For example, personal or sensitive data, like identity documents, social security numbers, bank statements, health information, internet usage data, financial and credit records, as well as IoT data such as geolocation and fitness records, can all be used by apps on the Oasis Network, without compromising the user’s privacy.

To be clear, confidential computing is already in use without blockchain technology, such as in credit card and e-commerce transactions. However, blockchain allows for logging and enforcing of data usage policies with high integrity and “auditability,” resulting in a new type of digital asset called Tokenized Data that can be exchanged for a fee or value.

As such, users can take control of the data they create and gain rewards for staking it with apps, building the first-ever responsible data economy. The Oasis Network is actively building a community to accelerate the development of game-changing use cases that reward users for the data they generate.

In order to achieve scalability and the corresponding issue of high transaction fees plaguing other Layer 1 networks, Oasis Network separates computing and consensus operations into two layers—the Consensus Layer and The ParaTime Layer. 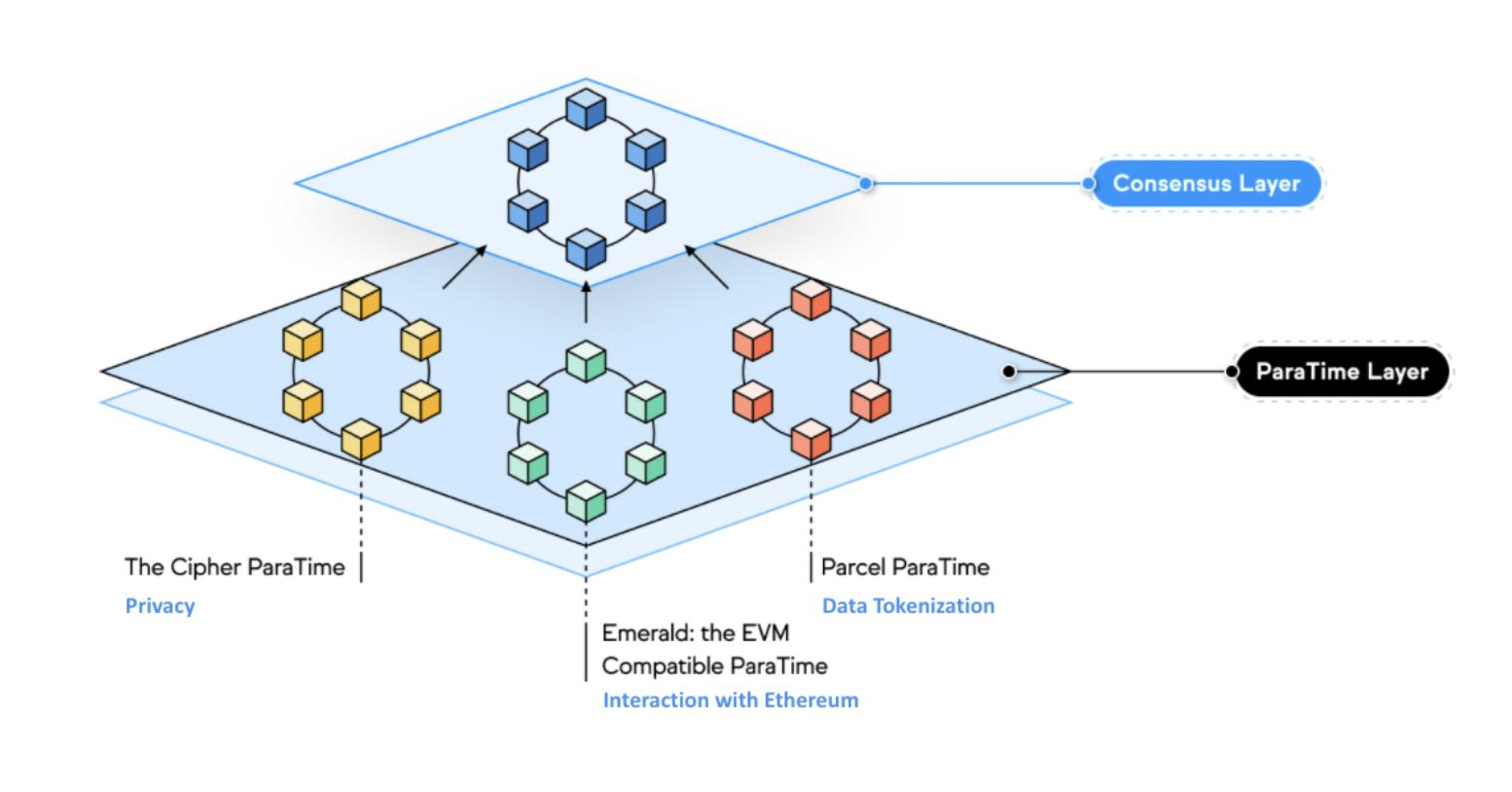 The Consensus Layer and the ParaTime Layer. (Source: Oasis Network)

The Consensus Layer is a scalable Proof-of-Stake (PoS) consensus run by a decentralized set of validator nodes. The ParaTime Layer is an execution layer that hosts many parallel runtimes (ParaTimes), and each one represents a replicated compute environment with a shared state. This separation allows different ParaTimes to process transactions in a concurrent manner, ensuring complex workloads processed on a ParaTime will not decelerate faster, simpler transactions on another.

One of these ParaTimes, the “Cipher” ParaTime, safeguards the privacy of smart contracts through a secure computing technology called a Trusted Execution Environment (TEE)–a hypothetical black box for smart contract execution in a confidential ParaTime.

Also, the network’s advanced discrepancy detection leads to Oasis’s higher efficiency than sharding and parachains. It is the verifiable computing technique that the network utilizes to verify ParaTime execution and only requires a smaller replication factor for the same level of security.

Use Cases of Oasis Network

Many projects have started building apps leveraging Oasis Network’s data tokenization functionality. Amid a rising trend of crypto theft and attacks, crypto exchanges are seeking platforms that can identify and ban bad actors. Oasis Labs is collaborating with some of these exchanges to develop solutions allowing for threat intelligence to be shared among exchanges. Due to Oasis’s privacy-enabled computing, exchange data remains anonymous even while it is being compared and shared, safeguarding the privacy and rights of individuals and corporations.

A Fortune 500 healthcare provider is also piloting the use of an Oasis Labs-built API in order to protect patients’ privacy while sharing their data with external parties.

Another healthtech company, Nebula Genomics, is seeking to differentiate its product from the competition by giving its customers control of their genetic data–using Oasis’s features, Nebula Genomics can analyze customers’ data without accessing their personal details.

Who Is Behind Oasis Network?

Founder Dawn Song is one of the early contributors to Oasis technology development. She is a professor in computer science at the University of California, Berkeley, and a leading figure in computer security and artificial intelligence.

Peter Gilbert is the director of engineering at the Oasis Labs. Before participating in the Oasis Labs, he was the manager of development engineering at FireEye, a cybersecurity firm that is now a subsidiary of Trellix. Trellix is a global cybersecurity firm that has served 40,000 commercial and government clients. Gilbert is also a Ph.D. holder in computer science at Duke University.

ROSE, the native token of the Oasis Network, is used for transaction fees, staking, and delegation on the Consensus Layer. The initial price for ROSE was $0.0382 on November 19, 2020. It gradually gained traction and reached its first peak of $0.2255 on March 14, 2021. This could be attributed to Bitcoin (BTC) hitting its first-ever $1 trillion in market value on February 19, which fuelled the entire crypto market. The partnerships between the Oasis Network with the UTU and Conflux Network in early 2021 also likely contributed to this bullish uptrend (UTU aims to become the trust infrastructure of the entire internet, whereas Conflux Network is the only state-endorsed public, permissionless blockchain project in China.) While ROSE’s price declined since May, it started to rise again in September. The bullish uptrend lasted until it hit its all-time high of $0.5964 on 15 January, 2022, riding the coattails of Bitcoin when it exceeded $65,000 in November 2021. Again, notable partnerships with Band Protocol, ThetaNuts, and Wormhole in the second half of 2021 likely fuelled the price action.

The ROSE token has dropped to $0.04 since then, in tandem with an overall downtrend in not just the crypto but global financial markets.

At the moment of writing, the ROSE token trades at over $0.045 per token with a circulating supply of 5.03 billion for a total market cap of more than $226.35 million. ROSE currently ranks #105 on CoinMarketCap’s cryptocurrency market cap leaderboard.

Outlook: How has Oasis Network Grown?

Regarding the Oasis’s DeFi ecosystem, Emerald, the Ethereum Virtual Machine (EVM) compatible ParaTime, is now available on the mainnet, and developers are launching new projects constantly. The Emerald ParaTime was built to tackle the problems faced by Solidity developers–high fees and low throughput. Emerald solves these problems by lifting the throughput of transactions to 1,000 per second and lowering the fees by more than 99%, in contrast to Ethereum (ETH). Some of the current DeFi projects on the network are Terra (LUNA), Ledger, Equalizer Finance, Chainlink (LINK), and Oasis Wallets.

Moreover, the Oasis Foundation has attracted some of the industry’s most prominent backers, such as Pantera, Dragonfly Capital, Jump Capital, and Electric Capital, who have collectively pooled together a $200 million Ecosystem Fund. This fund is earmarked for developers and projects on a mission to build next-generation Web3, DeFi, Metaverse, DAO, and NFT projects on the Oasis Network.

The Oasis Foundation has also been collaborating with many developer teams through the Grants program and DevAccelerator program to come up with new apps and integrations on top of the Oasis Network. These include Alethea.ai, a marketplace for AI-generated media, and Dead Man’s Switch, a decentralized, censorship-resistant tool for whistleblowers, etc.

The network’s community under its Oasis Ambassador program includes members from  Bangladesh, Vietnam, Brazil and South Korea. It has also built collaborations with  university departments, blockchain clubs, and other bodies including Blockchain at Berkeley, Tsinghua University’s Student Association of Digital Finance, Cambridge University’s Blockchain Society, and others.