What is Frax (FXS): The First Fractional-Algorithmic Stablecoin

The crypto world has undergone rapid innovations and developments in recent years. Among all the advancements, stablecoins have definitely caught the eyes of many crypto enthusiasts. Stablecoins are digital tokens pegged to the value of stable currencies, for example, the US dollar. They’re created to overcome volatility, thereby providing a stable medium of exchange and storing value for crypto users. Stablecoins are rising stars in the crypto world where Tether (USDT), the biggest stablecoin, has recorded an increase in trading volume from $1 million in early 2016 to more than $10 billion in 2020. Given Tether’s success, numerous new stablecoins have emerged in the market. However, they do not all work in the same way.

Unlike Tether, one of its strongest counterparts, Frax (FXS) is the world’s first fractional-algorithmic stablecoin. In other words, it’s a stablecoin partially collateralized and partially stabilized algorithmically. Launched in 2020, Frax Shares (FXS), the governance token, is currently trading at $17.55, with a market cap of over $284.9 million and a total supply of 100 million tokens.

How Does Frax Work?

As mentioned before, each stablecoin is distinct from the other in terms of its underlying mechanism. At present, stablecoins can be grouped into three categories:

Frax is a hybrid stablecoin as it’s backed by both asset collateralization and mathematical cryptographic algorithms. It’s an open-source, permissionless, fully on-chain protocol operating on Ethereum (ETH) and other blockchains. It aims to offer highly scalable, decentralized, algorithmic money in place of fixed-supply digital assets like BTC.

FXS is the value accrual, and governance token of the entire Frax protocol as all utility is conducted through FXS. Due to the highly governance-minimized approach taken by the Frax management team, FXS’s functions are narrowed to adding or adjusting collateral pools, adjusting various fees (such as minting or redeeming), and refreshing the rate of the collateral ratio. The team believes fewer disagreements will happen if the community can only actively manage limited parameters. 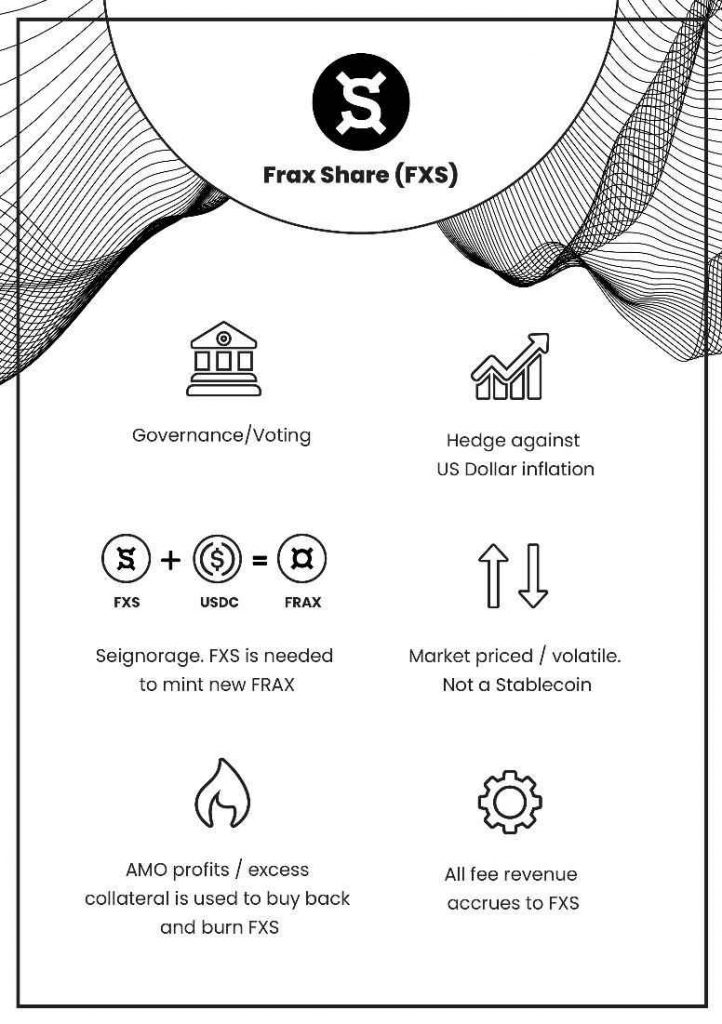 FXS supply is theoretically set to 100 million tokens; however, the amount in circulation will likely be deflationary given that FRAX is minted at higher FXS ratios. This means that as FRAX demand grows, the FXS supply will gradually become deflationary.

Minting and Redeeming on Frax

Minting and redeeming are the two mechanisms that keep FRAX’s price stable. FRAX stablecoins are minted by inserting the appropriate amount of its constituent parts into the system. FRAX is entirely collateralized at genesis, implying that users only need to place collateral into the minting contract to mint FRAX. When FRAX moves to the fractional phase, the minting of FRAX requires users to place a portion of collateral along with the burning of another portion of FXS. Put simply, the combination of collateral and FXS makes up one FRAX. For instance, in a 98% collateral ratio, every FRAX minted requires $0.98 of collateral and the burning of $0.02 of FXS. Meanwhile, in a 97% collateral ratio, the numbers become $0.97 and $0.03, respectively. 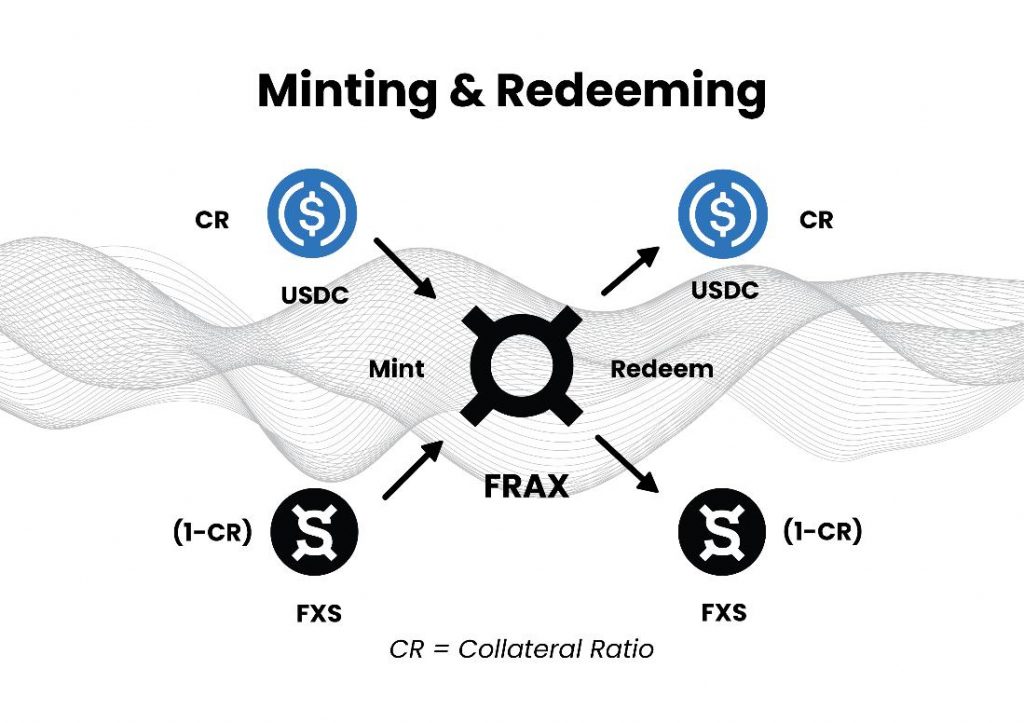 FRAX can always be minted and redeemed from the system for $1 of value, enabling arbitragers to balance the demand and supply of FRAX in the market. If FRAX is above the $1 price target, arbitragers and users can mint FRAX tokens worth $1 and then sell the tokens for over $1 in the market. The same goes for when FRAX is below the $1 price target. Arbitragers and users can purchase FRAX tokens cheaply on the market and redeem them for $1 from the platform. Readers should note that redeemers will receive a combination of collateral and minted FXS coins. For example, in a 97% collateral ratio, every FRAX coin can be redeemed for collateral of $0.97 and an FXS coin of $0.03.

At times, Frax will have excess collateral value or require additional collateral to hit the collateral ratio. Recollateralization and buybacks are two special swap functions built to handle these situations.

Recollateralization happens when the total collateral value in USD across the platform is below the current collateral ratio. In this case, the protocol allows the users (“callers”) to fill up the amount needed to reach the target collateral ratio in exchange for newly minted FXS tokens at a bonus rate. The bonus rate is set to 0.20% to incentivize the arbitragers to close the gap and recollateralize FRAX.

Buybacks are the opposite scenario where there’s excess collateral in the platform than required to hold the target collateral ratio. In such a scenario, FXS holders can “buyback” the excess collateral with FXS tokens which are then burned by the platform. This effectively converts the excess value into the FXS token, thereby maintaining the target collateral ratio. However, it should be noted that there’s no bonus rate for the buyback function. 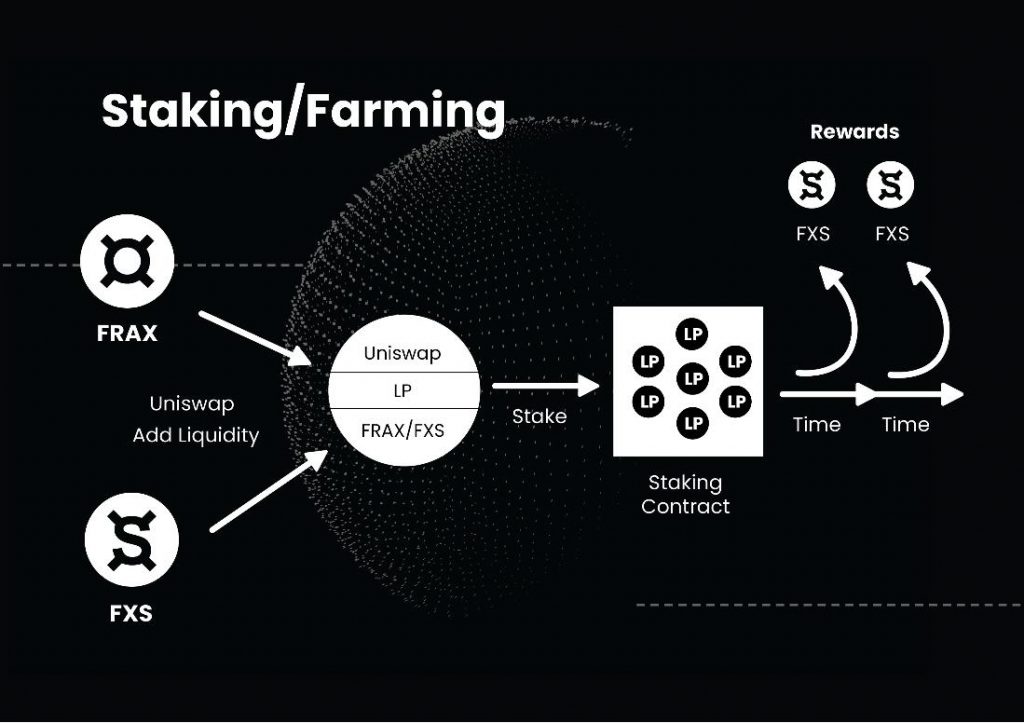 Long-term time-locked staking: Users who want to be liquidity providers (LPs) can lock their LP tokens into the protocol for up to three years on Frax. Two boost factors multiply the LP stakes: collateral ratio and time locked. The collateral ratio boost applies to the base emission rate of FXS coin, which is 18,000,000 FXS per year. As a result, more FXS will be distributed across the platform. Meanwhile, the time-locked boost applies to an individual’s stake as a proportion of all of the stakes in the pool, making it a zero-sum game for all the stakers. That is to say. A user gets extra FXS tokens by raising their proportion of the pool, which lowers others’ proportion. While this mechanism may sound unfriendly, it’s to help balance the risk and reward of locking liquidity into the system for a fixed amount of time, particularly targeting LPs who are keen supporters of the Frax protocol.

Who Is Behind Frax?

American software developer Sam Kazemian founded Frax Finance between 2019 and 2020. He first came up with the idea of a fractional-algorithmic stablecoin in 2019. Before that, he co-founded Everipedia, a for-profit, wiki-based online encyclopedia, with Theodor Forselius in December 2014. He is an alumnus of UCLA, double majoring in neuroscience and philosophy.

Other founding members include Travis Moore and Jason Huan. Travis Moore is the Chief Technology Officer (CTO) of Frax Finance, as well as the co-founder and CTO of Everipedia, making him Kazemian’s longtime partner. He also graduated from UCLA with molecular biology, biochemistry, and neuroscience degrees. Meanwhile, Jason Huan is an alumnus of UCLA, too, majoring in computer science. During his time at UCLA, he co-founded Blockchain at UCLA, a student-run blockchain community that focuses on the technological and business aspects of blockchain applications.

From an initial price of about $3.95 on December 27, 2020, the FXS token rose to its earliest high at $25.77 on January 16, 2021. This upward price movement was possibly driven by the crypto bull run that happened in early 2021, which witnessed Bitcoin’s price lift over 700% since March 2020. While FXS plummeted to a super low at approximately $3.08 on January 27, it still managed to hit several highs from February to April.

After that, FXS entered a sideway period for about half a year before regaining momentum to become bullish again in November 2021. Experts attributed this bullish trend of FXS to Tokemak’s launch of an FXS-dedicated token reactor on October 26, where FXS holders could deposit their cryptos in return for TOKE or tFXS tokens as yields. These tFXS tokens justified the user’s claim on the assets deposited and could be redeemed anytime.

Moreover, positive news surrounding the upcoming launch of Frax V3, which Kazemian considered as analogous to ETH 2.0, could be another factor that pushed FXS’s price higher. It was reported that the new Frax V3 would allow the veFXS holders to directly control the algorithmic market operations (AMO) regarding how the FRAX coin supply could expand and contract in the $1 peg. 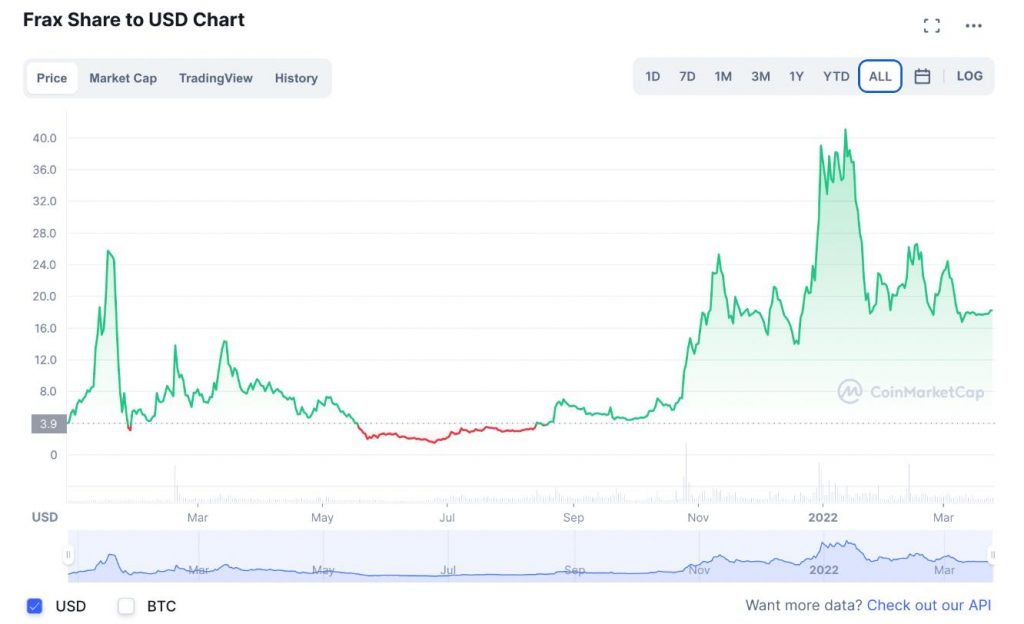 FXS’s price spiked in January 2022 and hit its all-time high at $42.65 on January 12. This could be due to the halving of FXS that had happened on December 20, which brought about FXS scarcity. Also, Frax’s partnerships with different projects, such as Sacred Finance (SACRED), Fei Protocol (FEI), Alchemix (ALCX), and Ondo Finance, might have contributed to this bull run as well.

Currently, FXS trades at $17.55, with a market cap of over $284.9 million and a total supply of 100 million tokens. It ranks #174 on CoinMarketCap’s cryptocurrencies leaderboard in terms of market cap and is among the top 15 stablecoins by market cap as well.

What Is The Future of Frax?

During U.S. Senate confirmation hearings on January 11, 2022, Jerome Powell, the incumbent Fed chief, replied to Senator Patrick Toomey that the Fed is not seeking to ban stablecoins, and both stablecoins and CBDCs can coexist. However, there are currently bipolar views on the coexistence of stablecoins and CBDCs. While some people think that a widely accessible digital currency will undercut the case for stablecoins, others argue that each serves distinct purposes and needs. CBDCs pledge to improve financial inclusion, reduce cash cost, and to some degree, track financial transactions. In contrast, stablecoins are dollar-pegged tokenized cash intent on ameliorating the speed and efficiency of payments.

In fact, Kazemian, in an interview with Cointelegraph, commented that new regulations had targeted fiat coins more than algorithmic stablecoins like FRAX. He also insisted that these regulations are too harsh compared to many experimentations allowed in the traditional financial space. Still, he reaffirmed Frax’s policy of complying with all regulations and being fully decentralized.

At present, Frax is working on the Frax Price Index (FPI) in collaboration with Chainlink (LINK), the industry-leading oracle network. FPI is an inflation-resistant algorithmic stablecoin that will be pegged to a decentralized consumer price index (CPI) with crypto-native elements. It aims to offer worldwide users a stable asset that yields the inflation rate at all times.

How To Buy FXS?

Let’s use Phemex platform for this demonstration. Phemex offers both spot and contract trading for investors to choose from. However, for beginning crypto buyers, spot trading is recommended. To buy FXS on Phemex, follow the instructions below.

Frax is the world’s first fractional-algorithmic stablecoin in which it’s partially collateralized and partially stabilized algorithmically. While fiat-backed stablecoins occupy the largest market share at the moment, Frax emerges to popularize the hybrid of asset collateralization and cryptographic algorithms, leading the paradigm shift for stablecoins. Though stablecoins have an uncertain future, Frax remains a promising project for crypto fans. After all, its goal of using algorithmic monetary policies to create a trustless stablecoin appears impressive.