Moving averages are measurement tools used to identify the direction of a price trend. Appearing as trend lines on the candles, it indicates the average price of an asset over an n-period. The two common types of moving average indicators are exponential moving average and simple moving average. What Is The Exponential Moving Average (EMA) Indicator?

The EMA indicator appears as a line that oscillates around the Bitcoin candles. If the price moves above the EMA, we might be in a bullish uptrend. Upon confirmation from other candles, a trader can open a long trade. If the price moves below the EMA, we’re in a bearish downtrend and a trader can consult other indicators to confirm the trend before opening a short trade. The price of Bitcoin will only temporarily deviate from a moving average before coming back to test it, and then trade above or below it.

In crossover trading, a trader can implement multiple EMAs based on different n-periods to trade cross. For example, a 20-day EMA and a 50-day EMA crossing could indicate a reversal on the current trend. The formula is based on daily closing averages and smoothening to filter historic price data for the current trend.

Who Invented The Exponential Moving Average?

The Exponential Moving Average has existed since 1963, making it one of the oldest trading indicators. Notable contributions to the study of exponential smoothening were made by Robert Goodell and Charles Holt.

Robert Goodell was a mathematician and a writer who specialized in exponential smoothening. His book series, Smoothening, Forecasting, And Prediction of Discrete Time, released in 1963, was used as the foundation for the EMA indicator.

Charles Colt, a university professor at the Business School of the University of Texas in Austin, also contributed to the area of exponential smoothening.

The EMA indicator is most commonly used for stocks and commodities trading, but has since been adopted by crypto traders. Prior to the introduction of digital trading software, traders manually calculated the EMA.

How to Calculate the Exponential Moving Average

The Exponential Moving Average is initially based on a regular moving average (MA). The MA is easier to calculate because it’s the sum of average closing prices without any weighted data. The EMA indicator uses previous EMA averages and gradually decreases the value of historic data.

Here is the formula for the EMA:

The variables for “today” and “yesterday” refer to Bitcoin’s current price averages. The “a” stands for smoothening or the amount of weight we choose to place on the equation – this is often 2. Exponential Moving Average calculation always depends on the previous results.

The default EMA n-period on Phemex is 9 which means it calculates prices over 9 days on the chart.

The weight on moving average exponential values decreases the further they deviate from the current average. Placing weight on recent prices makes the EMA more sensitive than indicators such as the SMA. The line moves faster, providing day trading signals as they occur.

How To Use Exponential Moving Average?

Let’s try out the EMA on the Phemex platform.

1 Head to the “Markets” and pick from hundreds of trading pairs; in this example, we’ll use the BTC/USDT chart. Start by opening a pair and click on “Indicators” at the top: 2 The indicator dropdown will prompt a search bar where you can input “Moving Average Exponential”: 3 Left-click on the indicator to activate it on the Bitcoin chart: What Is A Double or Triple Exponential Moving Average?

Traders can activate dual or triple EMAs for crossover trading. Exponential moving averages can be adjusted for an n-period and output different values. A trader could simultaneously activate a 9-EMA, 20-EMA, 50-EMA, 100-EMA, 200-EMA, etc.

Click on “Indicators” again and activate more EMAs. Once you’ve activated them, press on “Settings” to adjust the timeframe for each: 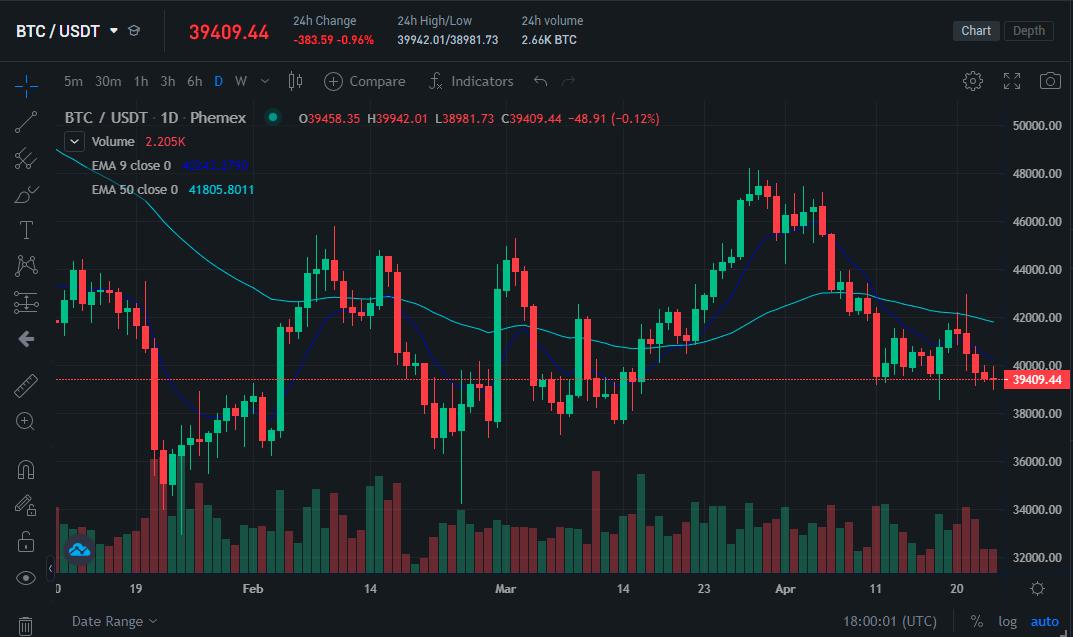 For this example, we want to use the 9-EMA and 50-EMA. To convert the 9-period EMA to a 50-period EMA, we only have to extend the length to 50. We can load them simultaneously: How To Trade With The Exponential Moving Average?

The Exponential Moving Average can be used fortrend trading, crossover, and divergence. The EMA is functional as a standalone indicator, but it’s recommended to combine it with other indicators such as the Relative Strength Index (RSI) or Stochastic RSI (StochRSI). Once the two lines cross, a trader should open a long trade or a short trade.

Once the two lines crossed, Bitcoin went on a 15% upward rally from $40,000 up to $48,000 and sustained the trend for a couple of days. Once the EMA decreased, the indicator picked up on the bearish divergence and sent a sell signal.

Day trading with the EMA should be done using short-term charts such as 4H (hourly) and adjusted for shorter n-periods. Avoid using the indicator in isolation and use trend oscillators such as the Relative Strength Index (RSI) that indicate “Overbought” and “Oversold” levels. The RSI indicator and the EMA are merged for day trading.

In the former example, the price rose from $39,000 to $43,000 and in the latter example the price fell from $43,000 to $39,000. Simply put: Long when the price falls below the EMA and short when the price rises above the EMA. Ensure the signal is matched with extreme readouts from the RSI oscillator.

The Simple Moving Average and Exponential Moving Average are similar indicators. The SMA places equal weight on all historic values. The EMA places weight on the latest averages and uses smoothening to gradually decrease the importance of historic data in relation to the current trend. The two indicators can be activated simultaneously: The EMA is more sensitive compared to the SMA and oscillates more with the candles. We can notice how the EMA (blue) sticks to the Bitcoin candles and moves close to the current trend, whereas the SMA is slightly separated. The SMA is recommended for long-term investing while the EMA is recommended for day trading.

The EMA is also different compared to the regular moving average (MA) indicator. The MA indicator only calculates the averages for an n-period without smoothening applied: Moving average indicators have existed for 100+ years and most indicators are based on a moving average. For example, the MACD indicator is based on a double EMA. The most effective EMA trading strategy is to implement a double EMA for crossover trading. Buy signals are generated when a less-sensitive (longer) EMA crosses a more-sensitive (shorter) EMA and rises above it.

To learn more about technical indicators one could combine with the EMA, read our technical analysis section.