What is The Weighted Moving Average?

The WMA indicator is a simple line that trends near the Bitcoin candles. It can be used in conjunction with other moving average indicators to predict future price movements. If the bars on the Bitcoin chart fall below the WMA line, this indicates a bullish trend. If the bars are above the WMA line, this indicates a bearish trend.

The speed at which it calculates trends makes it a leading indicator, which is ideal for predicting how the price action might unfold over the next few days. The “weight” factor signifies the weight of each bar over a set period. The WMA formula smoothens out data and makes it easier for traders to trade proactively. 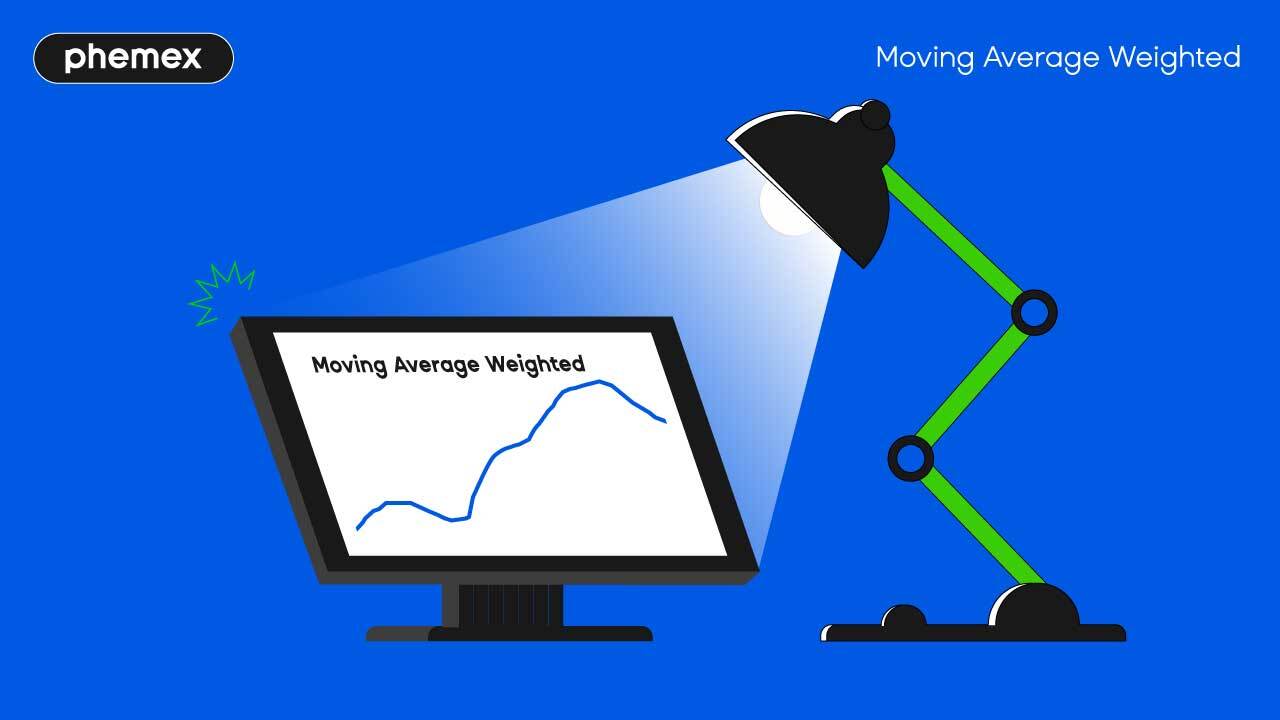 Who Invented The Weighted Moving Average?

The Weighted Moving Average was invented by John J. Murphy, a New York-based financial analyst. While moving averages were used in the stock markets for 100+ years, the WMA indicator was first introduced in 1999 in J. Murphy’s thesis called “Technical Analysis of The Financial Markets”. The thesis was published in the New York Institute of Finance.

The Weighted Moving Average formula identifies averages for certain periods, assigns a number to each average, multiplies them by the period and divides them. Here is how to calculate a weighted moving average:

How to Calculate Using The Weighted Moving Average Formula?

Let’s say we want to calculate the 3 week weighted moving average. If the average Bitcoin price is $40,000 for the first week, $41,000 for the second week, and $42,000 for the third week we can assign weight to each one of these based on the price difference.

How To Trade With The WMA Indictor on Phemex?

The WMA indicator is available under all Phemex spot market and futures trading pairs. Select any pair, such as BTC/USDT and load the chart: 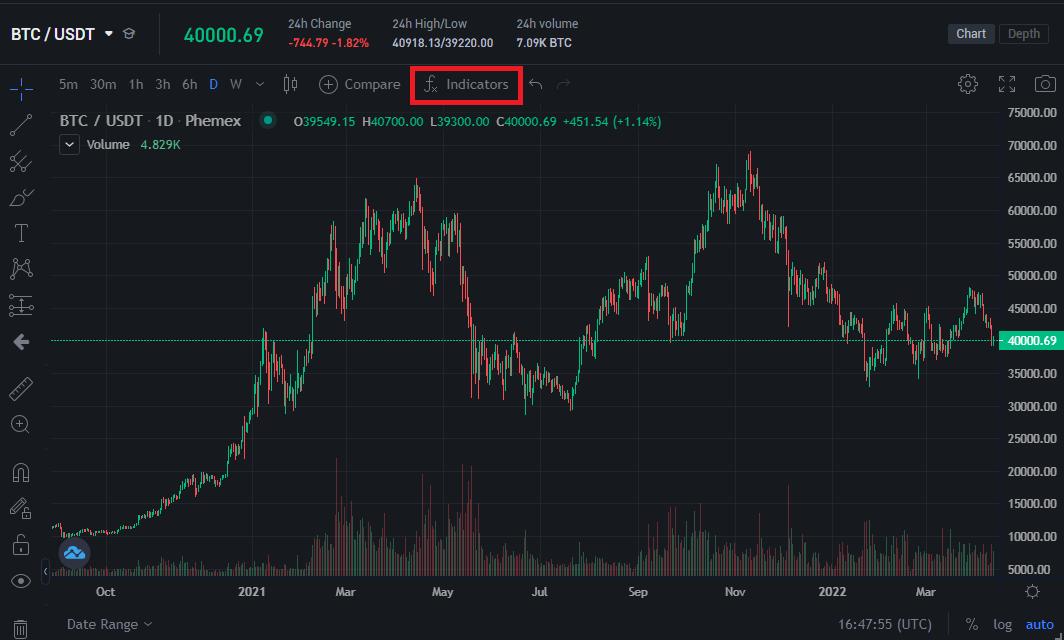 The Bitcoin chart is the most-traded chart in crypto.

Click on “Indicators” at the top and search for “Moving Average Weighted”: 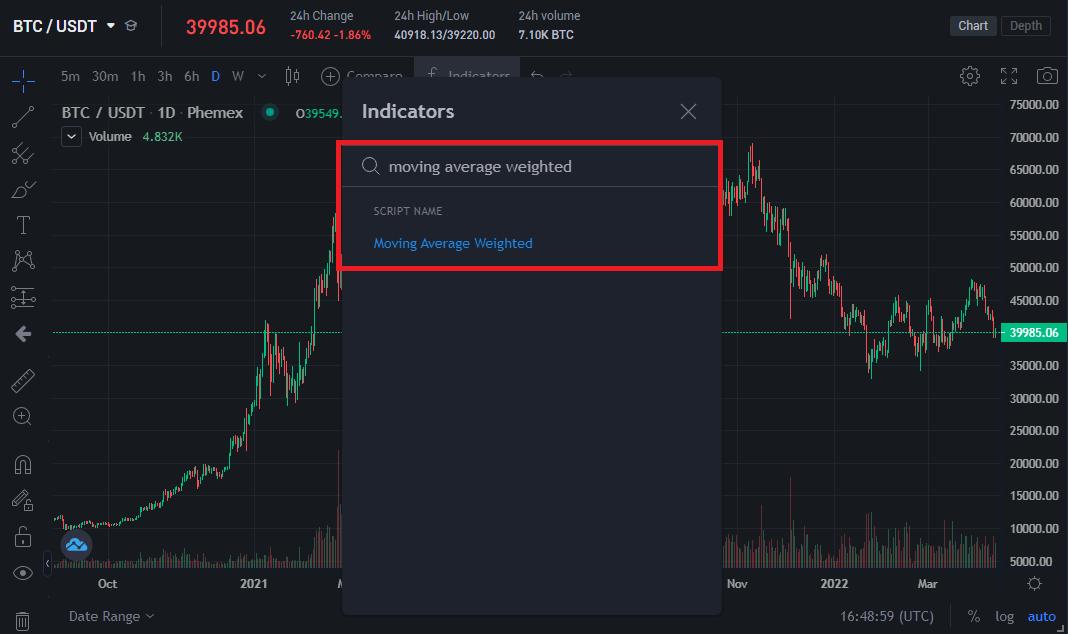 Find for your favorite indicator using our search engine.

Left-click on the indicator and it will automatically load beneath the chart. For this demonstration, we are using the daily chart but you can choose any time period in the top-left: 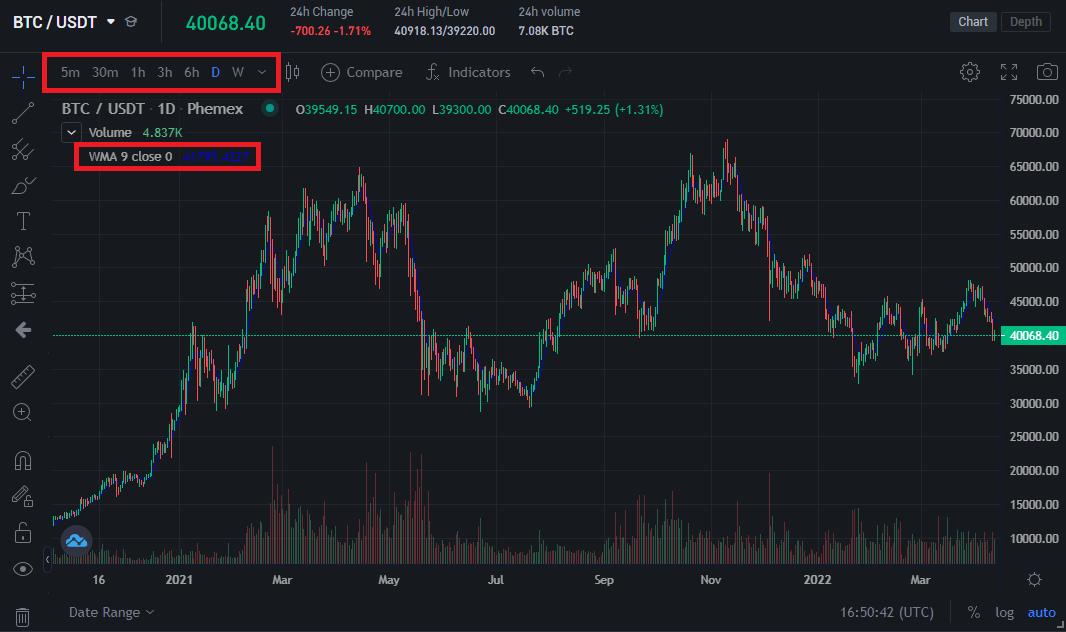 The WMA indicator is active on the daily Bitcoin chart.

On Phemex, the weighted moving average is calculated automatically. The WMA indicator trails behind the candles as a blue line – allowing traders to open long or short trades accordingly. If we zoom in to the present moment on the daily chart, we can check which trend formations are occurring: 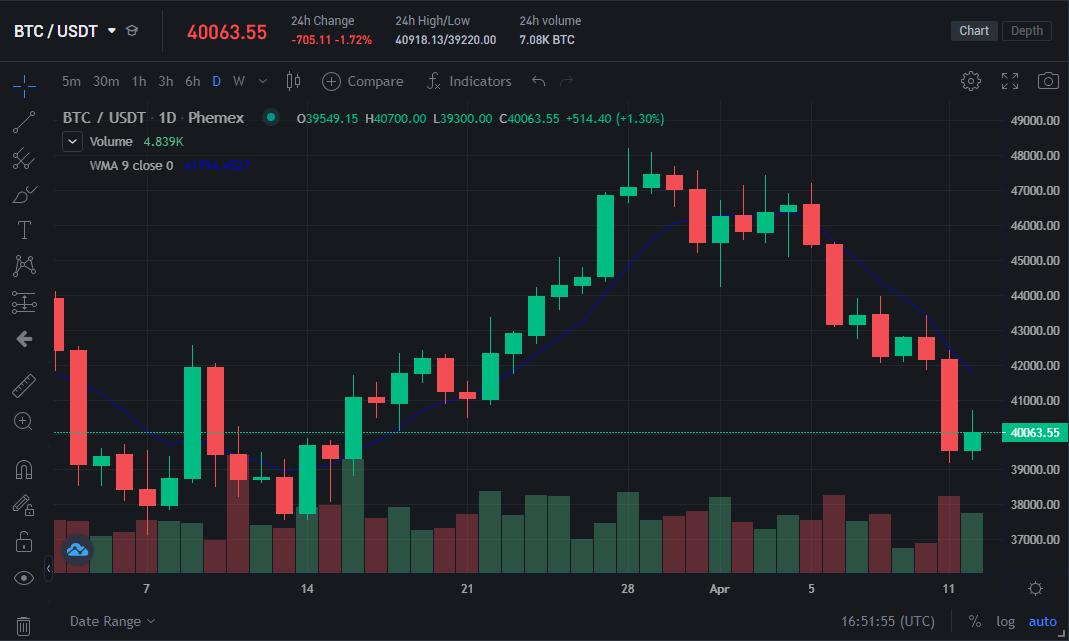 According to the WMA indicator, Bitcoin is currently in a downtrend as the candles are trading below the WMA line. It was trading underneath the WMA indicator line for the past 6 days, with no indication of a reversal.

Traders could open a short trade or wait until the trend starts reversing again. If the WMA line starts moving upwards, this indicates a trend reversal and a good long trade opportunity. If we open a long trade without the line changing direction, we are increasing our risk exposure as it goes against the current trend.

Weighted moving average forecasting is used for confirming the trend direction. The current trend direction is bearish and the indicator currently confirms a downtrend for a trader looking to short. A trader looking for long opportunities would have to wait until the WMA line starts going up to confirm the trend. 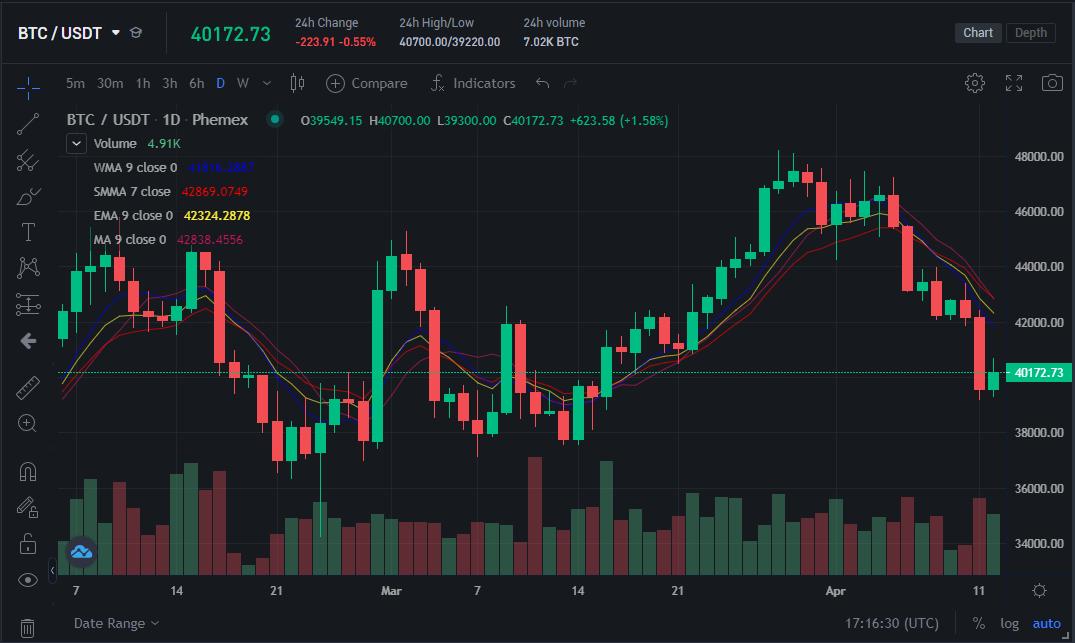 We can see that the WMA has gone down further than other indicators. This is because it acts without delays and confirms the bearish trend instantly. Traders can solidify their trading bias using the WMA because the speed at which it develops indicates there’s no reversal on the horizon.

WMA is generally the most sensitive moving average indicator. We can expect that it’s going to move faster than all other indicators combined. The advantage is that we are aware of trend formation in real-time and can act upon this information without delays. The disadvantage is that it only accounts for recent data and can give false signals.

What Is The Best WMA Trading Strategy? 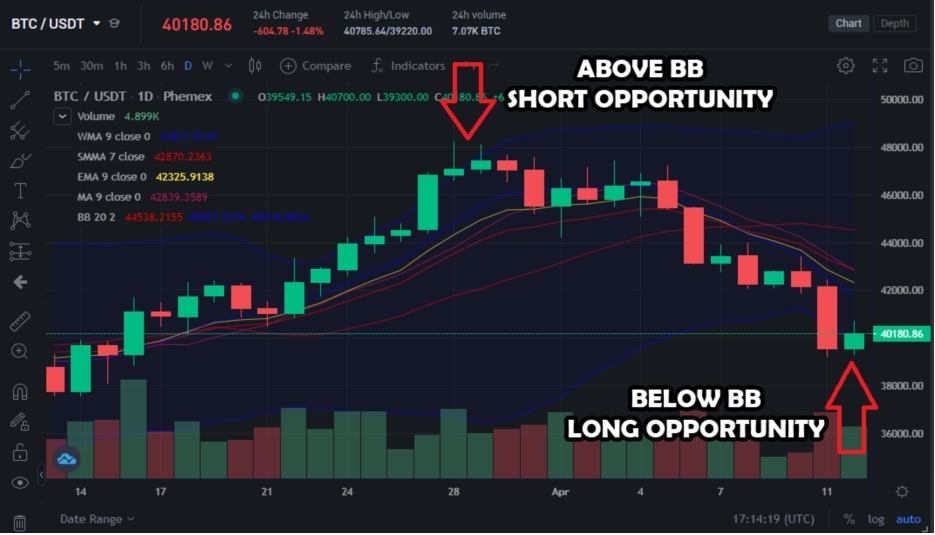 Moving Average indicators in the middle of Bollinger Bands.

We can deploy momentum oscillator indicators to confirm how long-term price movement aligns with the current price action provided by the WMA indicator. For instance, the Coppock Curve indicator tracks long-term price changes and signals when there’s a major reversal: 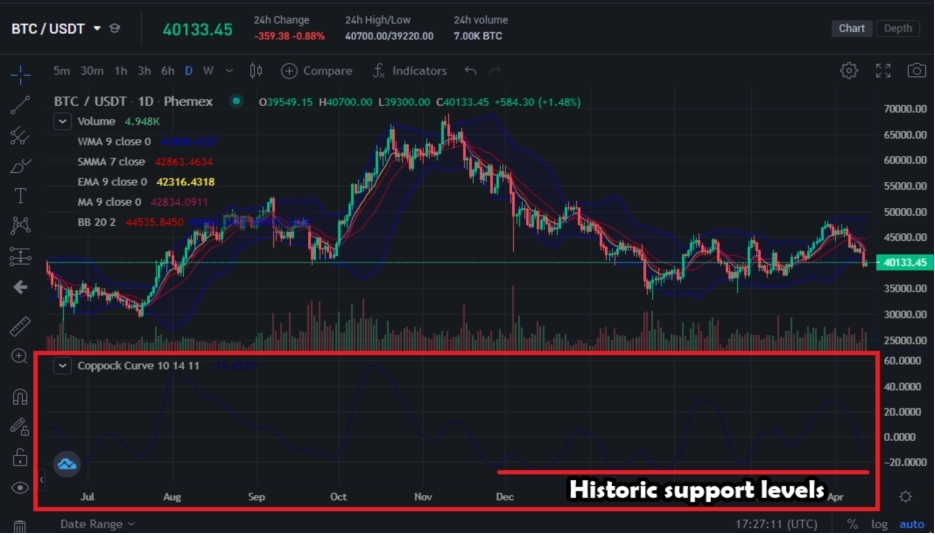 According to the Coppock Curve, Bitcoin has been in a downward trend for the past month and is nearing support levels where it saw a reversal in the past. This long-term indicator signals that Bitcoin could continue going down in the short-term, and then reverse to the upside promptly.

The WMA is superior to other moving average indicators for short-term trends and is the most sensitive MA indicator. The formula is based on recent price data, giving it an advantage over other indicators by filtering out historic price patterns. Traders that use trading bots or prefer leading indicators will benefit from the short-term trend data this indicator can provide them.