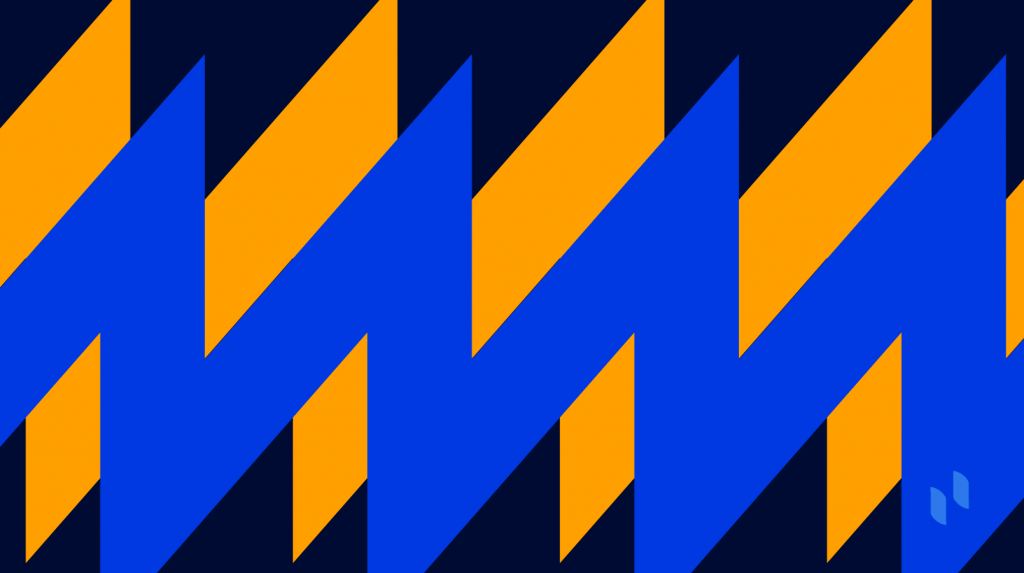 There are broadly two kinds of indicators available to measure the strengths and weaknesses in an economy or financial market, leading and lagging indicators. The former undergoes a change prior to the formation of an economic cycle or trend, while lagging indicators rely on prior price movements, and also offer more insight into the historical data of a certain market or economy.

What is the Moving average?

The “Moving Average” is one of the most popular and common tools used across various financial industries, and the cryptocurrency market is no exception. Depicted as a line on a chart that shows the average price over a set of prior periods, its purpose is to calculate the mean of the given data and demonstrate a smooth general trend filtering out any extreme price movements or “noise” along the way.

Since it is based on the digital currency’s previous price action, it is called a “lagging” or “trend-following” indicator. Despite being one of the most popular indicators, moving averages have various shortcomings. For example, a moving average with too short a period risks producing more false trading signals, causing investors to miss crucial trend movements.

What is the Adaptive Moving Average Indicator?

This led to the creation of the Adaptive Moving Average, which aimed to solve this problem by providing a clearer picture of the market’s behavior, and adapting to market conditions. First introduced in the book Smarter Trading by Perry Kaufman, a US-based quantitative financial theorist, the Adaptive Moving Average (AMA) technical indicator is built to adjust and adapt to ever-changing market dynamics. It is characterized by its low susceptibility to noise, which helps minimize its lagging nature for optimal trend detection.

How to read the Adaptive Moving Average (AMA) Indicator?

The AMA speeds up in tandem with trending markets and slows down when they are range-bound. In addition, during periods of low volatility, the Adaptive Moving Average sticks close to the asset’s market price, but it typically lags when volatility shoots up.

What is the MESA Adaptive moving Average (MAMA) Indicator?

The MESA Adaptive Moving Average (MAMA) is an indicator characterized by its ability to adapt to the price movement of the asset in question. Unlike normal moving averages which are curvy, this indicator comprises two moving averages, has edges, and moves in a staircase pattern.

How does the MESA Adaptive Moving Average (MAMA) Indicator work?

The MESA Adaptive Moving Average was developed by John Ehlers, Chief Scientist and President of MESA Software, and uses a composite of a fast and a slow-moving average to quickly respond to price changes in the asset. To determine the rate of price change, it uses a Hilbert Transform Discriminator, which is a linear operator that imparts a 90-degree phase shift to frequency components of an equation to keep up with market movements.

Determines the average value with the MESA Adaptive (MAMA) Indicator

The indicator also maintains the average value until the closure of the next candle, and according to Ehlers, it can be used to develop trading systems with almost no whipsaw trading since the average fallback is slow. Additionally, the MESA Adaptive indicator is cyclic in nature and can forecast both short- and medium-term market movements.

It also assists users in accurately gauging market trend divergence signals and, at times, can even act as a harbinger of an incoming trend reversal. The MESA indicator originally involved the same analysis technique used by Wave theory, which was first introduced in the electrical engineering field in a bid to gauge market cycles.

This trend-following indicator quickly became used to assess movements while trading commodities and stocks. Moreover, with the advent of burgeoning markets for Bitcoin and other cryptocurrencies, the MESA indicator is no longer limited to just the traditional financial market and is widely used by digital asset traders and investors today. 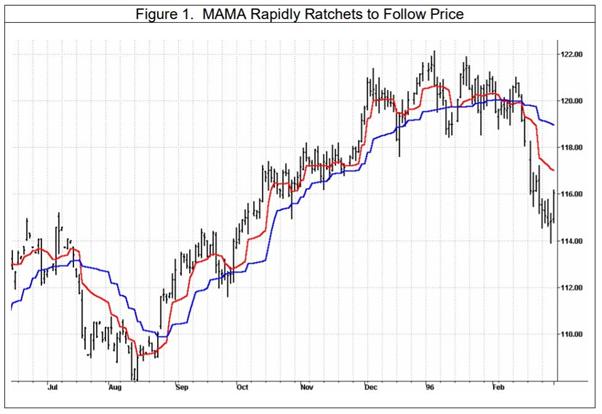 What is the Following Adaptive Moving Average (FAMA)?

The MESA moving average produces two primary outputs: MAMA and FAMA. FAMA, the Following Adaptive Moving Average, is an outcome of the first MAMA line, and the two are also time-synchronized. However, the main distinguishing factor between them is that, unlike the MESA line, FAMA undergoes vertical movements with a lag.

This ensures the two move averages do not undergo a crossover unless there is a major shift in the market, making MAMA and FAMA crossovers, according to Ehlers, “virtually free of whipsaw trades.”

The FAMA and MAMA can be traded like any other moving average to understand market trends and reversal patterns, as well as identify strong resistance and support levels. Cryptocurrency prices often bounce off moving average lines upon contact, and either line touching major support/resistance lines can prove to be crucial signals to buy or sell.

Crossovers between MAMA and FAMA

Once again, similar to ordinary moving averages, crossovers between the MAMA and FAMA lines resemble either a golden or death cross depending on the direction of the crossover. If the MAMA crosses the FAMA line from below and moves higher, the market tends to be bullish, and traders frequently consider this as a buy signal. On the other hand, when the MAMA line crosses the FAMA from above and shifts underneath, the market is considered to be undergoing a bearish trend, which is generally a strong signal for investors to enter short positions.

Combining MESA with various other available indicators provides traders with far more clarity about market conditions and asset price trends than any single indicator could alone.

The formula below is a general expression for how exponential moving averages (EMA) are calculated:

Here, the value of alpha varies from candle to candle, and relies on the following formula:

The DeltaPhase is essentially the rate of change of the Hilbert Transform homodyne discriminator, and the alpha value is held between the scope of Fast Limit and Slow Limit.

Who are The creators of MESA Adaptive Moving Average

The creator of the MESA Adaptive Moving Average, John Ehlers, is currently the chief scientist and president of MESA Software Inc. As both a technical analyst and electrical engineer, he had extensive experience in Fields and Waves, as well as in Information Theory. After retiring in 1976 to become a private trader, he was quickly fascinated by analyzing markets using technical indicators.

what is The MESA Cycles?

He questioned the logic behind indicators like the 14-day RSI, and whether certain periods were more effective than others before concluding that indicators needed to adapt to market conditions. Realizing this would require measuring market cycles, Ehlers soon introduced the MESA cycles measuring algorithm, as well as the use of digital signal processing methods in technical chart analysis.

John discovered MESA or Maximum Entropy Spectrum Analysis from an Information Theory seminar in 1978 and promptly reduced the whole concept into a computer program to be used in trading systems. Though it was originally written for S-100 computers, he later sold the source code to some traders who would eventually pioneer the use of computers in technical trading analysis.

What is The Ehlers Leading Indicator?

Eventually, he converted it to run on the Apple II, and the program has evolved alongside computing technology ever since. Today MESA Software is one of the most prominent firms in the financial analysis arena, having developed a plethora of indicators that are still widely used by analysts and day traders across the globe, including the Detrended Ehlers Leading Indicator (DELI).

As the name suggests, and unlike the other indicators discussed in this article, DELI belongs to the leading indicator category. In short, it provides early market signals based on the assumption that markets behave in cyclical patterns. Asset prices, in both traditional and cryptocurrency markets, are affected by human expectations to a great extent, and these expectations are dynamic in nature, constantly changing based on supply and demand.

Drastic changes to either the supply or demand can prompt prices to fluctuate between overbought and oversold levels. These price oscillations are a natural process of varying and recurring expectations, and can also induce cyclical patterns in the broader market.

Authored by John Ehlers, DELI is essentially computed by subtracting the simple moving average (SMA) of the detrended synthetic price (DSP) from the DSP itself. The detrended synthetic price is consistent with the dominant cycle of real price data and uses values such as the current high, the previous high, the current low, the previous lows, and feedback to produce two exponential moving averages (EMAs). Detrended indicators lead by one bar since they are used to predict points of a trend reversal.

What are The downsides of MESA Adaptive Moving Averages?

The Simple Moving Average, Adaptive MA, and the MESA Adaptive Moving Average all essentially function on the same underlying concept. However, the Adaptive indicators are a little more refined than their traditional counterparts. Unlike SMAs, their main objective is to steer clear of noise, reduce the lag that occurs in standard moving averages, and generate more reliable signals to implement different trading strategies.

These tools act as great independent indicators because they focus on unique aspects of the market. Still, as with any indicators, it’s always advisable to combine it with other technical indicators like Bollinger Bands (BB), the Relative Strength Index (RSI), the Awesome Oscillator (AO), Chaikin Money Flow (CMF), Klinger Oscillator (KO), and more.

Every indicator has its own set of weaknesses along with its strong suits, and it’s important to understand that every technical analysis tool will produce false signals at some point. To filter out all entries, especially in the highly volatile space of cryptocurrency, factors such as the asset’s technical and fundamental performance, historical price action, and sentiment analysis are equally important.

No investment is worth putting your life savings into, and it’s important only to invest capital that you’re willing to see disappear. Cryptocurrencies are far more volatile than traditional financial markets, and it’s crucial to do your own research before making any trades, deals, or investments in crypto.

All investments bear some sort of risk, and it’s indicators like these that help traders navigate the turbulent waves of cryptocurrency and other financial markets. Analysts everywhere are pushing the boundaries of technical indicators like never before, creating some of the most comprehensive and insightful tools to predict asset price movements across different time frames.

The cryptocurrency industry has grown far beyond what most people expected over the last ten years, but it’s still in its infancy. As more research is done into the functioning of digital asset markets, more advanced technical indicators and chart analysis tools will undoubtedly enter the limelight. However, with how popular the MESA Adaptive Moving Average is today, even if more intricate analysis tools are made accessible, it’s unlikely MAMA, or any of the moving average indicators mentioned above, will ever go out of style.