So far, 2021 has been the gift that keeps giving for the cryptocurrency community. In early January, the total value of the markets hit $1 trillion for the first time. In February, the BTC market cap alone managed to hit $1 trillion in value. The rest of the markets have also been performing remarkably well, a few short pullbacks aside. So what’s been going on during February? 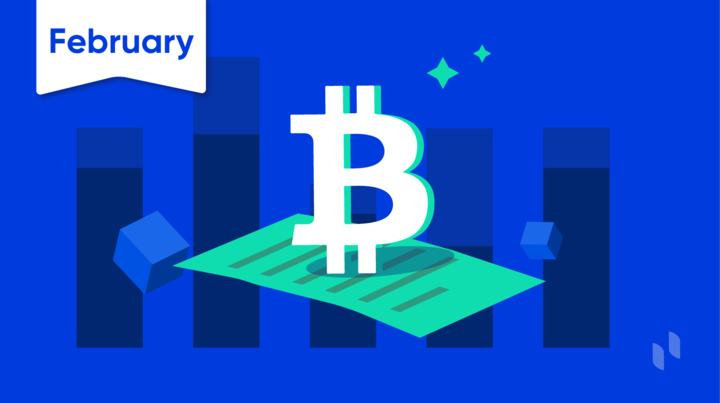 From a January high above $42,000, BTC started the month trading around the $32,000 mark. But after the sharp downturn at the end of January, crypto’s flagship asset posted consistent gains for the next three weeks, topping out at a breathtaking $58,300 on February 21. 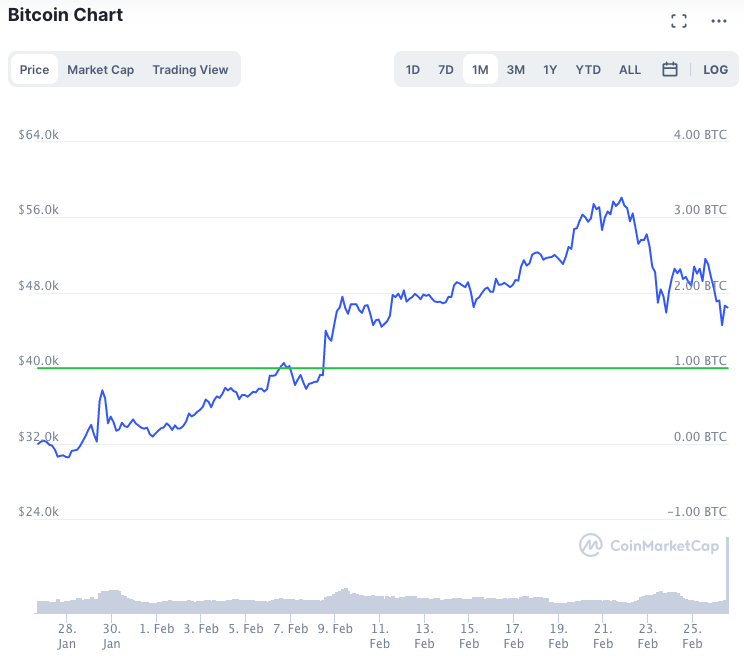 On February 8, the value of BTC received another remarkable boost from crypto’s biggest fanboy, Elon Musk, when Tesla announced in an SEC filing that it had bought $1.5 billion worth of bitcoin. The company also confirmed it was planning to start accepting payments in bitcoin for its electric vehicles, citing the investment as an initial injection of liquidity.

However, the “Elon effect” wasn’t enough to sustain prices through to the end of the month. In the last week of February, the BTC price pulled back, falling below $50,000 on February 23, and going to retest the $50k resistance level several times over the next two days. By the last working day of the month, prices continued to hover around the $46,000 mark.

The sudden correction doesn’t seem to be fazing the bulls, though. Michael Saylor, CEO of MicroStrategy, which has been buying up bitcoins in spades over recent months, even told CNBC that he believes a $100 trillion market cap is within the realms of possibility.

Things were no quieter in the ether markets this month, as the second-biggest cryptocurrency mostly followed the same pattern as BTC. ETH started February trading around the $1,300 mark but climbed steadily over the first three weeks, breaking the massive psychological barrier of $2,000 on Saturday, February 20. 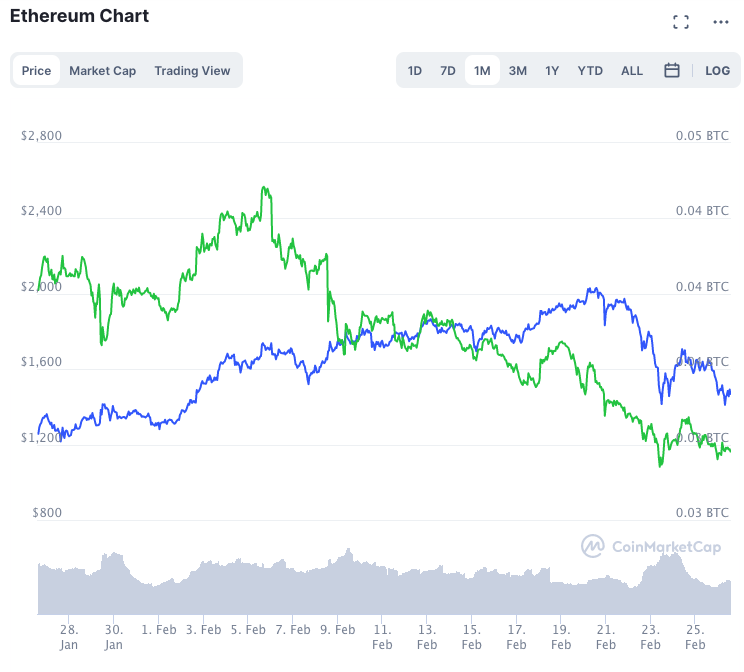 Unfortunately, like BTC, the bullish momentum didn’t sustain. ETH dropped dramatically over the last week of the month, finding support around $1,400. Despite a brief rally back towards $1,700, prices continued to hover above $1,400 on February’s last working day.

Predictably, open interest in BTC and ETH-backed futures and options has soared over February to hit new highs across the board.

During the weekend of February 20 and 21, when bitcoin and ether prices reached their all-time highs, open interest exceeded $18.5 billion for BTC futures and $7.5 billion for ETH futures – both new records.

Shakeup at the Top of the Ranking Tables

It’s not often we see a significant shakeup in the top ten of the cryptocurrency rankings. However, this month’s volatility means that the frontrunners by total market cap are locked in fierce competition for the top spots.

Since the SEC decided to target XRP and its status as a security, the Ripple-issued asset had been undergoing severe volatility even by 2021 standards. However, the most prominent contenders over recent weeks seemed to be Polkadot (DOT) and Cardano (ADA.) DOT has been performing well over recent months, buoyed by a growing developer ecosystem and plenty of positive news about promising applications in DeFi and more. ADA is currently sitting pretty at the top of the tables for Staking Rewards, with over $25 billion ADA staked. Now, XRP, DOT, and ADA occupy positions 7, 6, and 5 of the ranking tables, respectively, with Tether’s USD holding firm in the fourth position.

But Binance’s BNB coin has put in an epic performance during February, posting gains of over 700% at its peak and rising into the much-coveted third-ranked position behind BTC and ETH. Having started the month trading around $41, BNB went off on a tear from around mid-February, peaking above $330 right before BTC and ETH posted their own all-time highs. Although the price has since dropped off slightly, it’s found support above $200, indicating that BNB investors have every right to remain buoyant.

What’s behind this stunning rally? It seems likely that developer and user adoption is at least partially responsible. The Binance Smart Chain has been gaining steady traction as its biggest competitor Ethereum continues to struggle with high gas fees and congestion. PancakeSwap, the BSC version of Ethereum’s SushiSwap, became the first billion-dollar project on the platform during February, adding further credence to the idea that adoption of a protocol is positive for its native token price.

Non-fungible tokens, or NFTs, are predicted to be one of 2021’s hottest trends in crypto – a prophecy that doesn’t appear to be out of place based on the fact that they’re already making headlines. In the last week of February, digital artist Beeple sold a piece called Crossroads for a cool $6.6 million, a new record for an NFT trade.

The work was initially published as an NFT before the 2020 US presidential race and is an animation that was supposed to change if Donald Trump won. It first fetched $66,666.60 on November 1, only to hit the new record via the secondary markets on NFT marketplace Nifty.

In other news, Coinbase has now formally submitted its SEC filing for a direct stock market listing, the parent company of Tether and iFinex finally settled a long-running lawsuit for the sum of $18.5 million, and last month’s meme stocks craze has drawn in six million new crypto customers to Robinhood.

All in all, a stellar month, and it seems that there’s plenty more action to come. So hold onto your hats because the 2021 wild ride isn’t over by a long shot.