Even by crypto’s usual standards, January has been the wildest month we’ve seen in a long time. At the start of the month, we could have predicted that BTC prices would continue to climb and hit new all-time highs – in fact, we called it in the December Market Analysis. Even ETH looked set to continue rising. But it’s fair to say that DOGE landing in the top ten for the first time in over five years, thanks to an anarchic group of Redditors on a rampage to bring down Wall Street, was a turn of events that literally nobody saw coming.

Let’s take a look at what’s been happening. From starting the year at just below an already-impressive $29,000, BTC prices soared up to $34,400 before hitting the brakes on January 4. But the bulls weren’t to be deterred, continuing to test new resistance levels to reach a brand-new all-time high just below $42,000 on January 8. 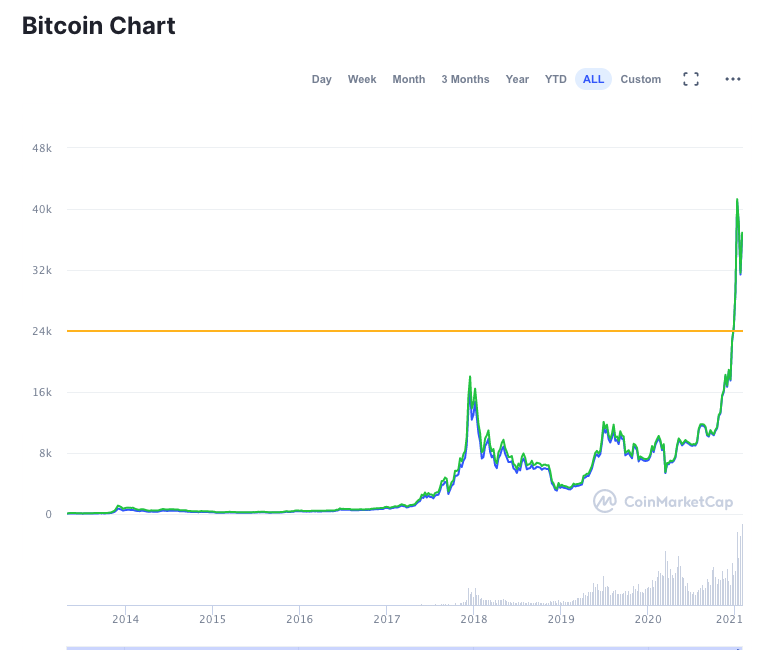 Since then, prices have been showing high volatility even by BTC standards. There was a rapid drop to test support at $32k on January 12, another bounce back up to $39,500 on January 14, and then tapering off by the third week of the month.

On January 22, there was a sudden but brief panic when BitMEX’s “Fork Monitor” appeared to indicate there had been a double-spend. As it turned out, it was a fairly mundane event involving one user attempting to send a transaction multiple times. Only one of them was included in the Bitcoin blockchain as a confirmed transaction, but the markets briefly went into a tailspin, selling off until prices bottomed out just below $30,000.

But the bulls were back in action pretty quickly. At the time of writing, the markets are in a frenzy in part due to Elon Musk’s continuing wry commentary on the overall state of affairs. The Tesla and SpaceX CEO changed his Twitter bio to a simple #bitcoin with the orange coin symbol. BTC immediately jumped by 13%.

Whether or not the “Musk effect” can sustain is another question. However, many analysts remain bullish on Bitcoin. Considering the full effects of the May halving are yet to be felt, some are suggesting that highs of $100k by as early as April are possible, based on historical trends.

Ethereum has also had a stellar start to the new year. Starting out on January 1 at the $745 mark, ETH prices had skyrocketed up to around $1,340 by January 10, only for a rapid selloff to ensue.

As with BTC, the bullish sentiments prevailed, and ETH went on to test new overhead resistance of $1,410 on January 19, which is around the same levels as its previous all-time high in January 2018.

By January 25, however, it was unequivocal. The bulls pushed ether prices up to a new high of $1,467. 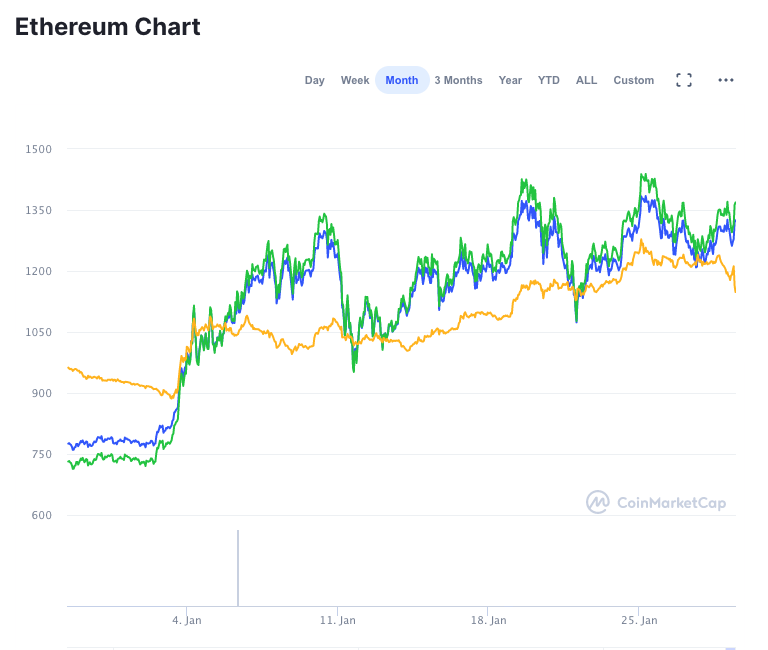 Can it sustain? Overall, market sentiments appear to indicate that Ethereum’s bull season isn’t yet over. One Cointelegraph analyst believes that a new high of $2,000 is within reach, pointing to increasing indicators of whale accumulation, overbought futures, and strong spot volume as reasons to remain bullish on ETH prices.

Usually, we limit our analysis to the crypto markets, but this month, the epic rally of memecoin DOGE can trace its origins to the eye-popping events in the stock markets. In a news sphere that’s usually pretty dry, the last week of January has had much of the world glued to events on Wall Street, thanks to a group of Reddit traders hellbent on upending traditional market norms.

The story goes back far earlier than the events of the last week, and if you’re interested, then there are a couple of excellent Twitter threads explaining the full background. Suffice to say, a group of Redditors from the r/wallstreetbets subreddit had decided to bet against the short positions of Wall Street hedge funds, who were pushing down the value of GameStop (GME) stock.

Learn how the short squeeze even happened with What is A Short Squeeze?

Predominantly using retail-friendly trading apps like Robinhood, they managed to bring things to a head over the last week of January. Hedge fund Melvin Capital was forced to exit its short positions in GameStop, having lost around $3.75 billion in January alone.

On Thursday, January 28, Robinhood cut the cord, preventing traders from buying any more GME. There was an uproar on social media as a result, with even US Democratic and Republican politicians agreeing for once that action was needed to ensure balance in the markets.

Unable to trade in GME, Redditors turned to crypto – specifically, Dogecoin, creating the kind of insane chart patterns that could only happen in crypto. 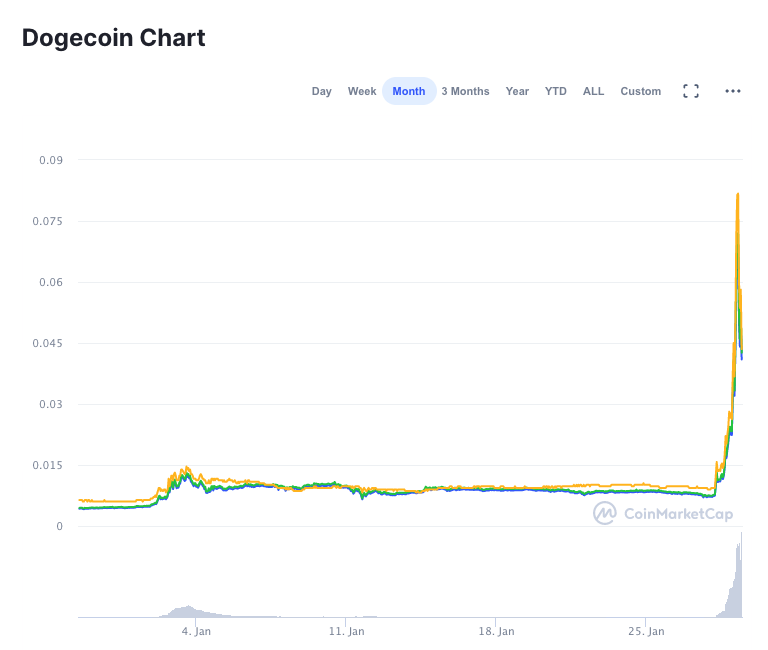 This story continues to unfold, and at this point, it could go anywhere. It wouldn’t be surprising if the story dies down by this time next week, but equally, it could continue to evolve at the same price and cause some other penny stock or obscure crypto to moon. Either way, it’s a gripping tale even for the casual observer.

The GameStop/Dogecoin saga makes even DeFi look like relatively slow news this month. However, like the rest of the crypto markets, DeFi tokens have continued to post significantly healthy gains, with several reaching new ATHs. Uniswap (UNI) has demonstrated impressive gains of 335% this month to achieve highs of $15.68. Similarly, Aave (AAVE) has gone from a monthly start of $78 to $306, representing an increase of 292%.

UNI, WBTC, and AAVE are currently occupying spots  14, 15, and 16, respectively, in the cryptocurrency rankings at the time of writing. Their upward trends underscore a continuing high demand for DeFi protocols. In light of the continuing animosity towards Robinhood as a result of the GameStop incident, DeFi could continue to see further adoption over the coming months.

← Bitcoin v.s Gold: Is Bitcoin Worth More Than Gold?
Bitcoin Lightning Network: What Is It? →
About