As citizens of the United States of America celebrated St Patrick’s Day with $1400 stimulus checks from President Biden, the cryptocurrency market turned a fitting shade of green. Besides, investor interest, both institutional and retail, in cryptocurrencies has risen dramatically in March. While most bluechip firms are interested in Bitcoin only and pushing its price through the roof, the rest of the market also performed exceptionally well. Let’s see what has happened in March so far. 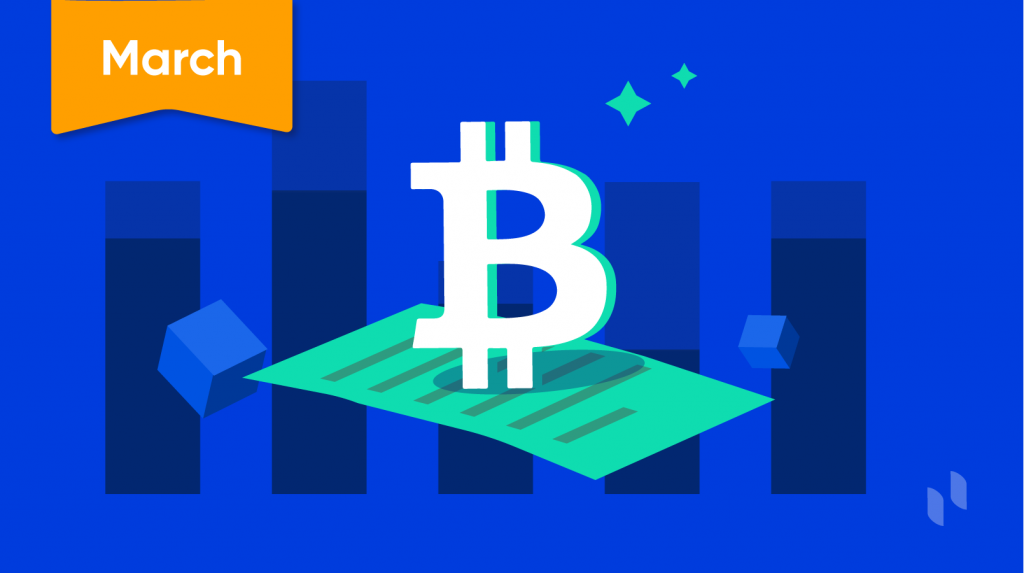 BTC Broke Its ATH Yet Again

On 13 March 2021, Bitcoin crossed the $60,000 mark for the first time, with two of five stimulus checks landing in cryptocurrency space, as per a survey. In just a few hours, Bitcoin set an all-time high of $61,556. The influx of capital was matched by the accelerating interest of institutions. 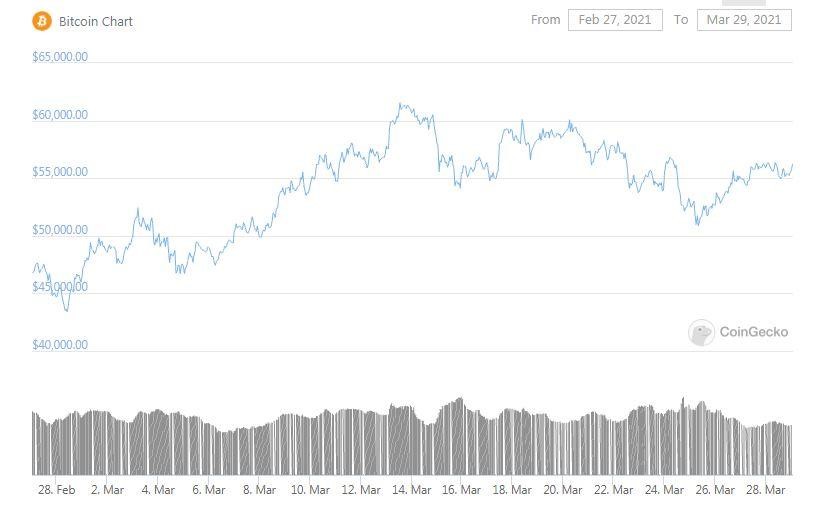 However, the asset plummeted to $50,846 in just two weeks, after the fizzing of a retail trader-driven rally over the weekend. Then, a string of bullish headlines put BTC back on track as the asset continued to trade within the $54k-$56k price range. Even the expiration of Bitcoin options couldn’t retrace much of the asset’s price.

Institutional investors continue climbing on board. Microstrategy bought another 205 Bitcoins for 10 million on March 5th, accumulating over 91,064 BTC bought at an average price of $24,119.

While Tesla has already put BTC on its balance sheet in February, the company announced on 24th March 2021 that customers can now purchase Tesla cars with Bitcoin. Or, as a Twitter user put it, Tesla is now spending their cars to buy Bitcoins.

Amid accelerating institutional demand for BTC, Fidelity, an investment giant, has also filed with the SEC to launch a Bitcoin exchange-traded fund (ETF).

Large institutions in Canada and China are showing interest in digital assets too. Though a Chinese firm called Meitu executed the first Bitcoin treasury strategy, Canada is way ahead in the race as it launches its third Bitcoin ETF on Toronto Stock Exchange.

What seemed like a FAD is becoming much more mainstream. In the month of February, Beeple started the auction of ‘The First 5000 Days,’ a digital artwork that would turn out to be the most expensive NFT. The artwork was sold for $69 million on 11th March.

The craze around NFTs continued through the rest of March as digital art collectors spent close to $440 million on different protocols. CryptoPunks sold two non-fungible tokens worth approximately $15 million.

Twitter’s CEO, Jack Dorsey also jumped onto the NFT bandwagon and sold his first tweet tweeted in 2006 for over $2.9 million.

Furthermore, WISeKey $WKEY is now all set to auction the first-ever secure luxury NFT on March 31, 2021. Cardano, another Ethereum competitor, also went through ‘Mary’ Protocol Upgrade on March 1st, which led ADA to rally to its ATH of $1.45.

On the L2 Side, Matic Network (rebranded as Polygon) made an attempt to become a key player as its token MATIC reaches an ATH of $0.422 on March 13.

Despite losing its position to its competitors in important metrics, Ethereum is still leading the race of the total value locked (TVL) as it crossed the $50 billion mark.

In mid of the war between smart contract platforms, Ethereum has scheduled a critical upgrade for July that could spur gains for Ethereum and might put it back to track. Hope it’s not too late for the second-largest crypto asset.

Cryptos are viewed differently in different regions. While the U.S is exploring options to bring clarity to crypto laws, India is proposing a bill to ban all private cryptocurrencies as per the report published by Reuters on March 14.

In an effort to keep its citizens away from investment risks, the UK imposed a ban on crypto derivatives and exchange-traded notes (ETNs) on 25th March 2021. The ban led ByBit to shut down its operations.

As the UK moves to ban crypto derivatives, the world has gone in the opposite direction to open up digital innovation.

Although the news of Nigeria banning cryptos put many traders under pressure, the Central Bank clarified that the country isn’t planning to stop its citizens from trading cryptocurrencies.

Whether in favor or against cryptocurrencies, the increasing interest among regulators tells us that lawmakers around the world are taking interest in cryptocurrencies. Though some countries oppose this asset class, many countries are finding a way to allow their citizens to trade and invest safely.

← What are Dark Pools: Large Trades For Institutional Investors
What is the Bitcoin Genesis Block? →
About