After a stagnant month in September, bullish sentiments returned for Bitcoin in October. Having started the month hovering around the $10,500 price, Bitcoin tested its 2019 high on October 28, briefly passing $13,800 to reach a new 2020 peak. However, as tends to happen with BTC, volatility prevailed, and the price quickly pulled back towards the $13,000 mark. Nevertheless, a run-up of over $3,000 in less than a month is remarkable, even in the volatile cryptocurrency markets. Bitcoin’s positive price action now has speculators predicting Bitcoin will go on to test its previous all-time high of $20,000 as soon as early 2021.

Bitcoin’s bullish outlook has futures traders laying their bets, with open interest exceeding the pre-pandemic levels for the second time since February. So what’s been happening in the crypto news to influence the price?

Price analysis for Bitcoin has been generally bullish based on post-halving trends observed in 2012 and 2016. However, this month’s impressive rally received a significant boost from the news that PayPal is moving into the cryptocurrency space. The payments giant has been relatively slow to follow its competitors, such as Revolut and Skrill, that have been offering crypto trading services since 2018.

However, on October 21, the company issued a press release confirming that users in the US will now be able to buy, sell, and swap cryptocurrencies, including BTC, ETH, and LTC, using their existing PayPal accounts.

The announcement also confirmed that from early next year, PayPal will integrate cryptocurrency payments into its merchant network. This news is perhaps even more significant, as it will allow the company’s enormous user base the ability to spend cryptocurrencies at any of the 26,000 merchants that accept PayPal. Conversions to fiat will be handled by PayPal’s systems, meaning merchants don’t have to accept the volatility of cryptocurrency.

However, it’s worth noting that this news doesn’t mean PayPal is going as far as becoming a cryptocurrency exchange. Users won’t have access to withdraw their funds from the platform without changing them back to fiat first. It will also have no impact on the number of global cryptocurrency wallets, as PayPal will hold all private keys. So “crypto-lite” appears to be the theme of the news.

Nevertheless, PayPal’s news sent the markets into a spin, adding over 10% to the value of BTC in 24 hours and pushing above $13,000. The price action was also enough to prompt one whale to move a whopping 88,857 BTC, worth $1.15 billion.

(Read the latest blog post to learn more about Crypto Whales: What are crypto whales?)

October has also seen two notable events that could have been bearish for the crypto markets, which proved resilient in the face of adversity. On October 1, news broke that the US Department of Justice is bringing criminal charges against the founders of BitMEX. The news follows a year-long investigation of the exchange by the Commodities and Futures Trading Commission, which accused BitMEX of unlawfully allowing US traders on its platform without undergoing the requisite anti-money laundering procedures.

Perhaps because there was no actual interruption of trading on BitMEX, the price of Bitcoin barely flinched. Nevertheless, open interest in its flagship BTCUSD perpetual swap contract has noticeably declined over the last month. In other exchange news, the markets briefly reacted to an unexpected announcement from OKEx on October 16. The company’s website confirmed that it was suspending all withdrawals since it had lost touch with one of its private key holders, who was “cooperating with a public security bureau in investigations.” Nearly two weeks on, and the situation remains as is.

Nevertheless, the BTC markets marched on regardless. After a brief blip where the price dropped from $11,500 to $11,250, Bitcoin resumed its bullish trend.

Is DeFi Dying Down?

The final piece of notable news from this month in the cryptosphere is the apparent slowing down of the DeFi markets. Topping out at slightly under $12.5 billion in total value locked, the last few days have seen a drop off towards the $11 billion mark. 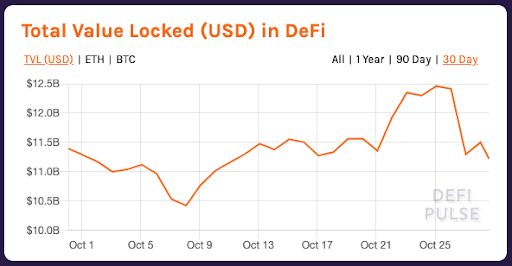 Although ETH price movements could account for some of this, DEX transactions are down for the month of October, according to Dune analytics. Therefore, it seems that the inevitable is happening, and the DeFi hype is starting to die off.

If so, this could prove to be a positive development. After all, it was only once the ICO mania of 2017 had faded that the crypto markets started to mature, with the availability of derivatives, hedging instruments, and institutional interest all picking up. The DeFi craze has served to demonstrate what decentralized finance can deliver. However, it now seems likely that the real building work will start, building on the first iteration to create more secure smart contracts with fewer market manipulation opportunities and a better user experience overall.

← How to Trade Crypto? Spot Trading Explained
Understanding Trading Volume in Ranges and Trends →
About