What is STORJ: The Decentralized Answer to Cloud Storage Solutions?

Crypto has become famous for many of its aspects, including its revolutionary technology and the fact that it is decentralized, but perhaps the element that has made it most famous is that it has made some very ordinary people very rich. As the space matures, however, the focus is shifting increasingly to those projects that have utility and less as a “get rich quick” scheme. One project that has ridden out the bear markets of 2018, 2021, and now 2022, is Storj DCS, a decentralized platform with true utility. Storj utilizes a native cryptocurrency, the STORJ coin. At the time of writing, the STORJ price is of $1.27 per STORJ coin, with a circulating supply of 386.1 million tokens for a market cap of $490.5 million. 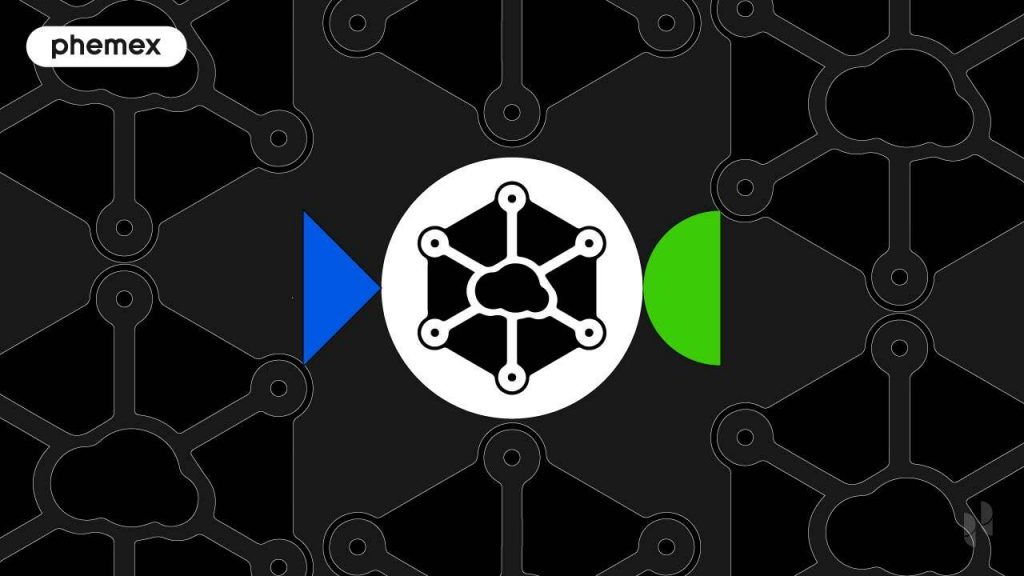 Storj, one of the first decentralized cloud storage (DCS) networks in the world, was launched in 2017 on the Ethereum network as a secure place for users to store their data. The network wanted to create a more cost-effective, transparent, and secure platform to centralized alternatives such as Google, Microsoft, and Amazon, as well as to place control back in the hands of those storing the data. To achieve this, Storj developed a method whereby individuals could rent out space on their computer in exchange for the Storj cryptocurrency, the STORJ coin. Then, the platform would take a user’s file, data, or other item, encrypt it, and digitally shred it, storing the separate particles across multiple computers. In this way the data is completely secure as nobody except the original owner has access to the whole document, those renting out space on their computers earn a profit, and the whole process is completely transparent as the transactions and movement of data are all recorded on the blockchain.

How Does Storj Work?

It is thanks to decentralized technology that Storj DCS can operate and offer secure storage space, a passive income, and return data control to its users. This is all accomplished through the following layers of technology: 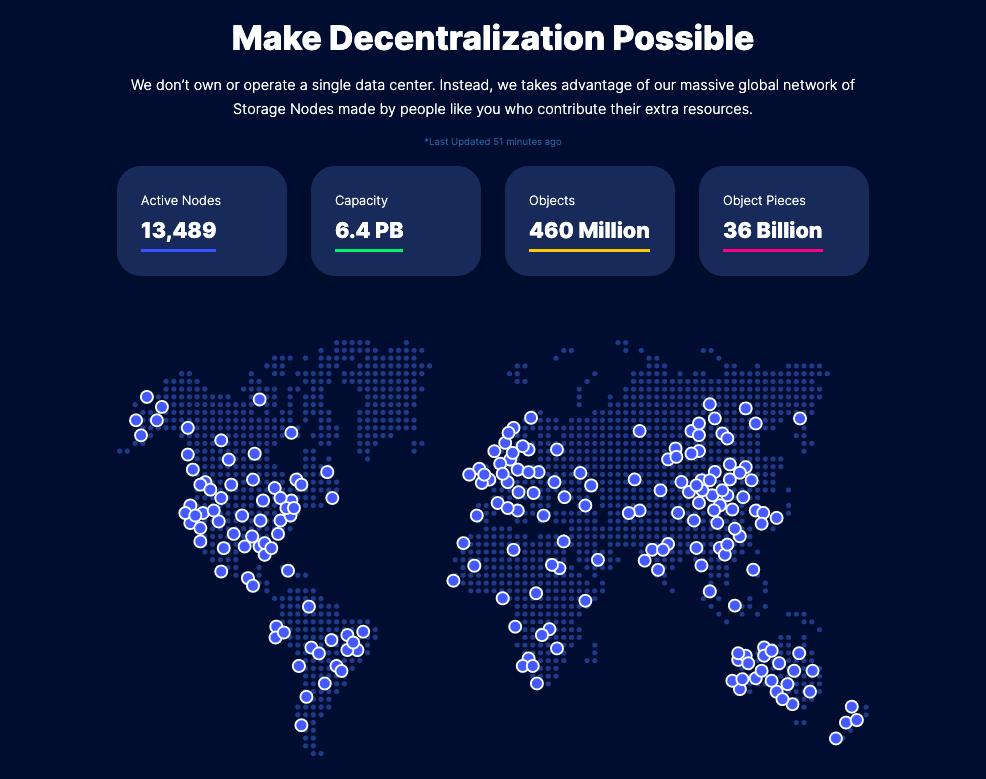 What Is The Storj Cryptocurrency?

Storj cryptocurrency, or STORJ coin, is the Storj DCS’ native currency. It’s used across the platform for transactions and can also be bought by investors who want to invest in the Storj network. A few important details on this cryptocurrency and its existence are explained below:

How To Mine Storj Coin?

Despite the Storj network running on a proof-of-work (PoW) blockchain, the Ethereum blockchain, STORJ crypto is not mineable. Instead, users earn rewards by running storage nodes on their computers to rent out space in exchange for STORJ crypto. This is done by installing the storage node on your computer, although to become a storage node, one must first meet certain hardware prerequisites:

Additionally, there are various software requirements:

With this setup, users can easily rent out their unused computer space and earn STORJ cryptocurrency rewards.

How Many Storj Coins Are There?

Once the remaining 39 million enter circulation, no new coins are planned to be minted, however, this could be adjusted should the development team feel the limit needs adjusting. This could happen in an effort to adjust the Storj market cap, as the Storj market cap reflects the number of tokens in circulation multiplied by the current market price. This is unlikely, however, as minting new coins would mean more supply and not necessarily more demand, which could mean a lower market cap.

Who Is Behind Storj?

Storj was launched by software developer Shawn Wilkinson in May 2014. Since then, however, Wilkinson and his co-founder, investment banker and businessman John Quinn, changed the concept and relaunched Storj as Storj V3 in 2019.

As Storj developed, Wilkinson stepped down as CEO to let someone with more experience take over and lead the company. Currently, businessman Ben Golub serves as CEO, while Wilkinson takes the reigns as chief strategy officer (CSO) and Quinn works as the chief revenue officer as well as being a member of the board.

Is Storj a Good Investment? A STORJ Token Price History and Analysis

The Storj DCS is a great storage solution, offering decentralized and secure storage for a price on average 80% lower than centralized storage servers. The platform has also seen significant investment, raising 910 Bitcoin (BTC) through a 2014 public crowd sale (worth around $460,000 at the time), $3 million in a seed funding round for its 2017 launch, and then going on to generate $30 million in its first year of business. The Storj valuation saw the effect of this user trust, rising to a Storj token price of $1.82 in December 2017. Following this, the momentum continued, reaching a STORJ all time high of $2.62 in January 2018. Unfortunately, the 2018 bear market took its toll on STORJ coin, as loss of trust in blockchain security and decentralization drove the token price down to lows of $0.12 at the end of that year. 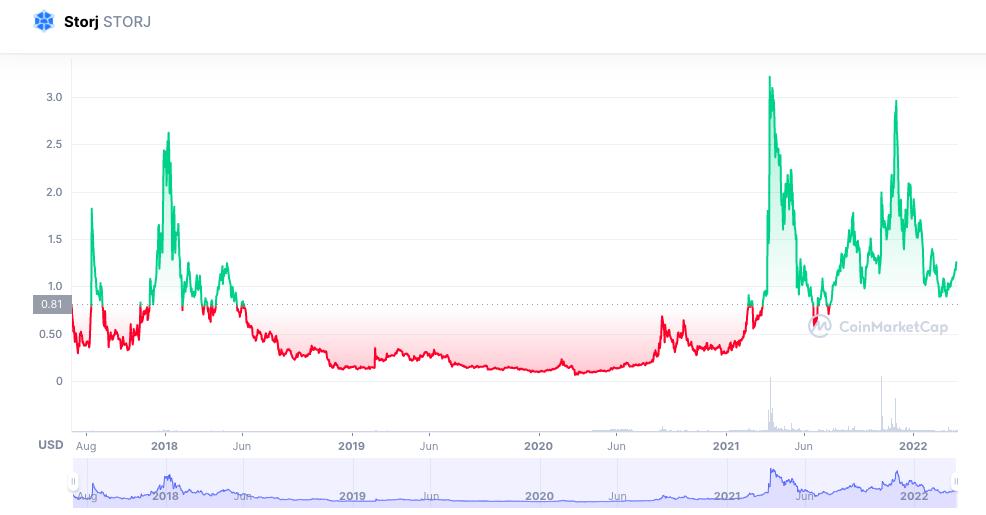 The 2019 rebrand to Storj V3 did little to drag the platform from its low value, but finally, with the bullish turn that came after the 2021 bear market, investment came back to Storj. This increase in interest could well have been thanks to the huge boom in decentralized finance (DeFi), as with the development of new platforms and decentralized applications (DApps) came a need for decentralized storage.

What is STORJ All Time High?

In March 2021, the token reached a STORJ all time high of $3.21 and although the price volatility has continued, the STORJ valuation has remained consistently above $0.60 for the whole of 2021 and 2022, mostly being above $1 during that period. This may not be the highest value, but it does show that there has been continued support for the platform.

STORJ token price is unlikely to moon, due to the network’s priority to stand as a functional platform rather than a get rich quick scheme. Moreover, although Storj may have been the first platform to offer decentralized cloud storage through sharding, it’s not anymore, with platforms such as Filecoin (FIL) and Internxt (INX), among others also competing in the space.

Storj DCS is a platform with great potential and a great offering, as well as being the first network to realize the potential of decentralized storage. The STORJ token price remains healthy, however, unless it can offer something above its competitors, it is unclear if the STORJ valuation will rise.

Storj is a decentralized cloud storage platform that uses innovative sharding technology to offer fast, secure, and cost-effective online storage solutions. Through its use of a P2P marketplace and its presence on the Ethereum blockchain, Storj is able to truly offer a decentralized platform, which it maintains enhances user security as even if the server goes down, users will retain access to their data.

Despite Storj having a great offering and planning to make a positive impact in the space, it’s faced by an ever-increasing number of competitors. However, as DeFi grows and civilization increasingly moves online, whether it be to store files, apps, audiobooks, or movies, there will inevitably be a growth in the demand for cost-effective, secure, online storage solutions. With this in mind, so long as Storj is able to keep up with its competitors and continue to expand its decentralized vision, there is no reason why Storj should not grow in the space for some time to come.