What is Filecoin: Decentralized Cloud Storage

Launched in 2017, Filecoin (FIL) is a decentralized storage system based on the InterPlanetary File System (IPFS). The coin’s creators state that the system aims to “store humanity’s most important information”. Filecoin currently trades at $192.16 USD per coin with a supply limit of 63.5 million, for a total market cap of around $12.2 billion. Filecoin is a peer-to-peer network used for decentralized cloud storage of files. One of Filecoin’s core claims is that it returns control over data back to the user. By maintaining a low barrier to entry for storage providers, Filecoin aims to deliver publicly verifiable storage and retrieval solutions in an open and highly competitive market.

In addition to its primary purpose as a storage network, Filecoin also claims applications as a data exchange and time-stamping solution. Other standard use cases include its function as a payment system and an inflation-resistant store of value. Examples of Filecoin applications include Powergate (an API-driven solution for multi-tiered storage across Filecoin and IPFS) and Textile Hub (a toolkit for the development and scaling of decentralized apps, or DApps)

Filecoin describes itself as a market in which storage owners “rent out” space to clients. The coin is designed to be traded by developers, clients, miners, holders, and ecosystem partners across storage, retrieval, and token trading markets.

How Does Filecoin Differ from Bitcoin?

Unlike Bitcoin (BTC), Filecoin’s blockchain is secured through proof-of-replication and proof-of-spacetime mechanism. This means that coins are mined not by solving arbitrary math problems, but rather by providing cloud storage and retrieval services.

While Bitcoin can also be used to store data, it is rarely used as a storage solution, owing to the high costs involved. Filecoin offers much cheaper data storage at scale and has been heralded as a much more environmentally friendly protocol with more clearly defined use cases.

Bitcoin is a transactional token, meaning its primary use case is as an exchange for goods and services, or as a store of value. Filecoin, on the other hand, is a utility token, designed for the use and provision of services across the Filecoin network. 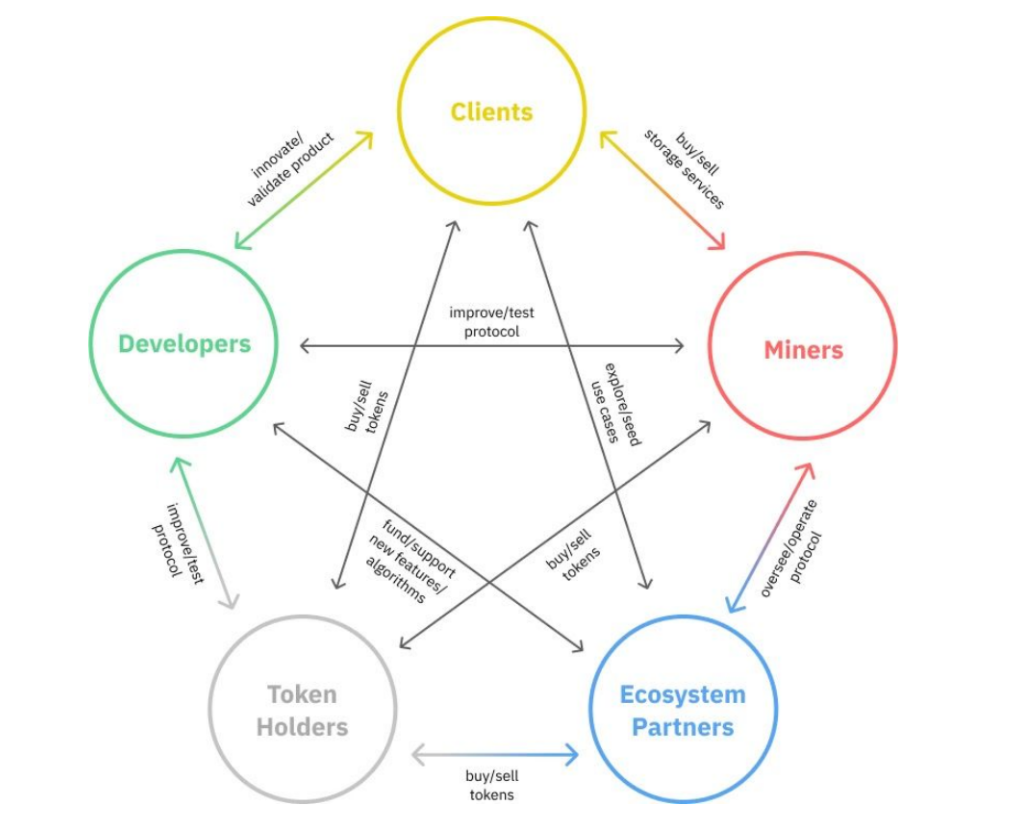 How Is Filecoin Mined?

Filecoin is mined by performing storage, retrieval, and repair services. One of the network’s core concepts is that the mining process should create value and reward participants, from large-scale data centers to local providers covering the last mile.

When a client wishes to store data on the Filecoin network, they are provided a complete and open overview of all available storage miners and their market prices. Miners compete to win storage contracts, ensuring prices are fair and storage is efficient.

To create a trust incentive, miners are required to stake a certain amount of Filecoin before being allowed to offer storage. Once the client selects a winning miner, a deal is made on the Filecoin network and the client transfers their data to the miner for storage.

To earn Filecoin, miners must prove that they are storing the data properly through cryptographic proofs. Miners submit their proofs as new blocks and verify blocks sent by other miners on the network. The protocol incentivizes proper storage by only generating the storage fee (in FIL) for blocks that are accepted by the network.

Unlike traditional storage services such as Amazon S3 or Google Cloud Storage, clients are automatically refunded with a proportionate amount of the miner’s collateral if files are lost. The network also includes a completely automated fault handling system that executes without any human intervention.

Just like with storage, when a user wishes to download a file, they can look up a complete list of any retrieval miners that offer that file. The client can then select the fastest and most affordable miner, pay them a fee, and finish the download.

When a file becomes more popular and the requests increase, other miners can opt to rehost it on their own servers. As miners will opt to rehost files in regions with the most demand, this creates an ecosystem in which access speed and cost are optimized worldwide.

Who Is Behind Filecoin?

Filecoin was developed by Stanford graduate Juan Benet and is maintained through his company, Protocol Labs. The American programmer was previously best known for creating IPFS, the open-source, peer-to-peer, decentralized web protocol for which Filecoin serves as an incentive mechanism.

Since its initial round of funding from Y-Combinator in 2014, Filecoin has received plenty of attention from institutional investors, including notable firms such as Andreessen Horowitz and Winklevoss Capital. The coin raised roughly $257 million USD in its 2017 initial coin offering (ICO) – the biggest ICO in history at the time.

What Is the Future for Filecoin?

The decentralized storage technology that Filecoin is built on becomes more desirable each time a large centralized provider experiences a major failure.

As their name suggests, centralized storage providers tend to be concentrated in one or few locations. This means that last-mile delivery can be very slow in regions with poor coverage and highly brittle storage, as a single point of failure could affect millions. For example, just a few weeks ago, a fire at an OVH Data Center in Europe took down millions of sites, including big names such as WP Rocket and Imagify.

Why does storage continue to be centralized if it presents such risks? Well, centralized centers are easier and cheaper to build. And companies such as Amazon and Google are large enough to bulldoze the competition and set their own terms. For this reason, developers are seeking to claw back a perceived loss of control through alternate technologies. With its resilience and efficiency, a decentralized storage solution like Filecoin is a highly appealing option.

The potential benefits of Filecoin have not escaped hosting services either. On March 11, Fleek, a website hosting and storage service, announced that it would support automatic Filecoin-based archiving for all sites and storages created on its platform.

Since its inception, Filecoin Launchpad has incubated a variety of interesting projects across secondary applications such as finance, video conferencing, and even crypto gaming. Of note is Endowl, a toolkit that facilitates estate planning by using decentralized technology to create, update, and execute wills stored through Filecoin.

Another solution incubated by Filecoin Launchpad is Huddle, a video conferencing service tailor-made for schools and universities. By leveraging Filecoin’s decentralized technology, Huddle claims to deliver smooth audiovisual e-classroom experiences. It also provides hosting for large-scale data (such as recorded lessons) for 5x cheaper than those of Amazon S3.

How Has Filecoin’s Price Changed Over Time?

Filecoin has experienced explosive growth over 2021, rising by over 756% from $24.35 on Jan 1 to $191.16 on Apr 2. In addition to general upswings in the crypto market, this trend is being driven by increased adoption in the U.S. and the huge growth of Filecoin mining in China.

On March 17, crypto investment giant Grayscale added Filecoin to its roster of crypto trusts, along with other coins such as Chainlink (LINK). Expectations are also high for IPFS, a core Filecoin technology. IFPS has experienced growth in business applications and may soon expand with further decentralized storage solutions for NFTs.

Looking to China, Filecoin is riding on an all-time high. Data from the country’s largest exchange shows that activity in FIL/CNY has exceeded that of Bitcoin (BTC) and Ethereum (ETH). Major firms have been getting involved too. Most notably, Xinyuan Technology, a hardware company based in Shenzhen, spent a whopping $88 million USD on Filecoin miners in this year alone. 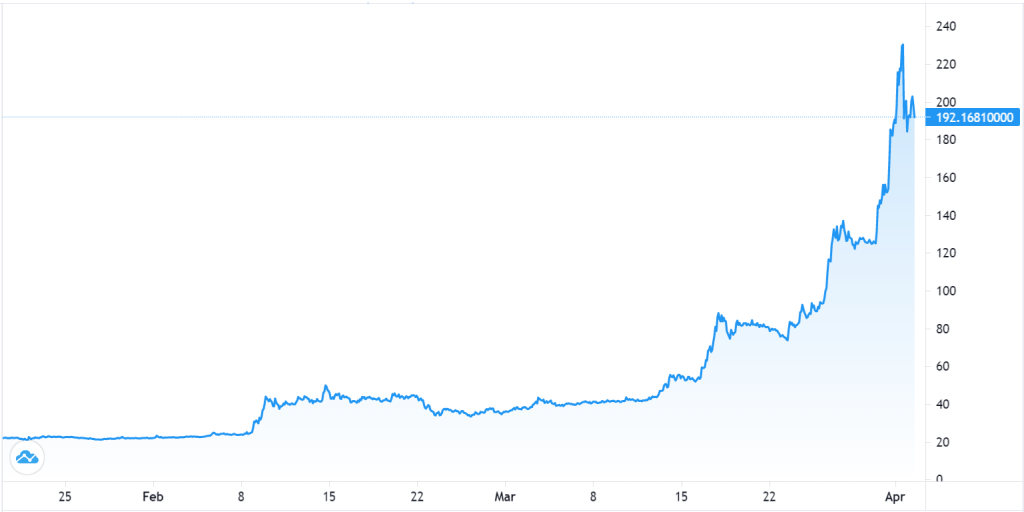 Filecoin’s price has not all been smooth sailing, however, with a major incident taking place as recently as March. Miners discovered their Filecoin account on an exchange had been credited twice. While not a true double-spend, the incident seemed to reveal that Filecoin’s network could be exploited to trick exchanges into accepting deposits twice.

Shortly after the flaw was discovered, major exchanges suspended all deposits of Filecoin, causing the coin’s value to plummet by 4.5% in one day.

The Filecoin team’s incident report noted that the “double deposit” was not due to an error in the network’s code, but rather a misuse of its API. Services were quickly reinstated the next day, and Filecoin’s team stated they would improve their API documentation to prevent such incidents in the future.

Filecoin’s purpose has been clear from the start. The coin relies on two premises: first, that demand for data storage will keep growing, and second, that industries will soon see the need for the redundancy and accessibility of decentralized storage.

The good news is that the first premise is unquestionably solid. A report from MarketsandMarkets valued the cloud storage market at $50.1 billion USD in 2020 and projected a compound annual growth rate (CAGR) of 22.3% from 2020 to 2025.

The report notes that the rising need for remote workforces created by COVID-19 has led to increased demand for agile and distributed storage solutions across the world. Other factors include the continued growth of IoT, big data, and AI applications, all which promise to stimulate demand for cloud data storage.

The case for the second premise is still up in the air. While Filecoin’s decentralized storage solutions are impressive, only time will tell whether enough clients will choose it over the highly established Amazon and Google storage ecosystems.