Is Bitcoin A Strong Investment Instrument Against Inflation?

The current system of exchange rates that are determined solely by market forces came about after the Bretton Woods currency system ended in 1971. Since this moment, currencies are no longer fixed to others nor backed by gold or tangible goods, but rather tied to domestic economic conditions and trust in a country’s policies.

This system still remains today, and the US dollar is the world’s preeminent currency. However, in light of the economic situation resulting from the global pandemic, countries have resorted to stimulus, which has created another inflection point: inflation. As a result, Bitcoin has drawn a renewed interest from investors and other economic actors seeking inflation-resistant assets during a time when central banks are printing more money to hold up lagging economies. Thus, there is a growing hypothesis pointing to the notion that the occurrence of inflation crises worldwide is associated with the increased adoption of Bitcoin.

This is because every time the government prints money, the value of that nation’s currency depreciates, which further impacts the currency’s purchasing power. Hence, the reason why smart investors suggest putting your money into appreciating asset classes instead of keeping it in a savings account.

For a long time, gold has been considered a store of value because it is an ideal asset whose value increases over time. On the other hand, many investors have suggested Bitcoin as an alternative source for storing value, arguing that its scarcity makes it a strong asset to invest in. While the first cryptocurrency of the world is extremely volatile, the question remains whether it can really act as a possible hedge against inflation.

The Inflation Debate: Is it Good or Bad?

In January 2021, U.S. Federal Reserve Chairman Jerome Powell said “ central banks welcome higher inflation as a sign that the economy is right on its track after the pandemic slump.” The statement is true because “good” inflation encourages investment and brings more opportunities for economic growth.

This statement proves that most economists don’t consider chronic high-ish inflation threatening. However, a look at the bond market tells us otherwise and shows that inflation concerns are real and should be taken seriously. A proxy for inflation expectation, the five-year breakeven inflation rate is close to its ten-year high.

Moreover, the yield curve continues to steepen, which tells us to expect a higher interest rate in the future as the central bank tries to tackle the inflation problem.

Since the US is already a debt-laden economy, the ongoing bond market is an indicator of trouble in the near future.

But despite the rise in bond yields and the likelihood for inflation to overshoot the Fed’s 2.0% target over the coming months, policymakers have maintained a dovish message. Jay Powell has repeatedly stressed policymakers’ focus on supporting the economic recovery, particularly in the labor market, and ensuring broad financial market stability.

Because it has the capacity to be a global currency that is not tied to any particular economy, Bitcoin has the potential to act as a hedging opportunity against country-specific risk. In particular, buying and holding Bitcoin offers the opportunity to hedge against very high inflation, similar to how gold and other assets have functioned in the past (as mentioned above). Specifically, people who have already been affected by higher inflation are more likely to be interested in holding and using Bitcoin, as well as supporting Bitcoin as an alternative financial system.

First, Bitcoin maximalists argue that since Bitcoin has a limited supply of 21 million coins, its value will increase over time and the asset will resist inflation. This theory sounds compelling because when there is a change in the relative quantity of two goods, the one with an increasing supply will eventually get cheaper.

Second, the other example proposed by Bitcoin proponents is with regards to hyperinflationary countries, such as Argentina or Venezuela.

In summary, as we know, an oversupply of sovereign legal tender according to conventional monetary thinking will cause currency values to fall, which opens the door to inflation. On the other hand, Bitcoin is held up as an asset that is qualified to appreciate in value because it is noncentralized and programmed to cut its supply in half periodically.

How have the Bitcoiners’ theories on Inflation played out?

The crypto argument against inflation was put to test as the U.S printed trillions of dollars in stimulus as a response to the global pandemic. But despite enacting $5 trillion in stimulus, the levels of inflation investors were expecting haven’t appeared.

The inflation target of the U.S. Federal Reserve is 2.0% and despite inflationary fears, the country’s inflation rate hovered around 1.5% until March 2021. An explanation for such stability is money velocity, which quantifies how quickly money changes hands in an economy. In simpler terms, if the money supply increases but the people don’t spend it quickly, inflation remains stable. This is what happened in the US, people had money in their accounts, but they didn’t spend fast enough to trigger inflation. 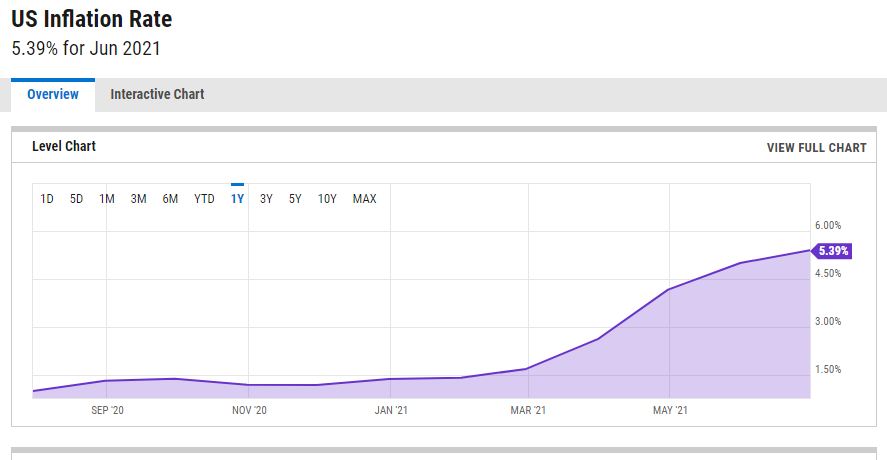 Investors buying Bitcoin as a hedge against future inflation aren’t wrong. Federal Reserve Vice Chairman Richard Carida said the country will maintain near-zero interest until inflation reaches the target of 2.0%, which means the Fed will continue to suppress the interest rate and let inflation rise. However, as long as inflation does not get out of control, there is no reason that Bitcoin will assume the role as the ultimate hedge against inflation. But that doesn’t mean that Bitcoin is not a formidable asset class for investing.