Although movies about Bitcoin, cryptocurrencies, and blockchain haven’t hit the mainstream Hollywood screens and reached great popularity, digital currency concepts have nonetheless been featured in previous sci-fi films such as Steven Spielberg’s Ready Player One (2018). 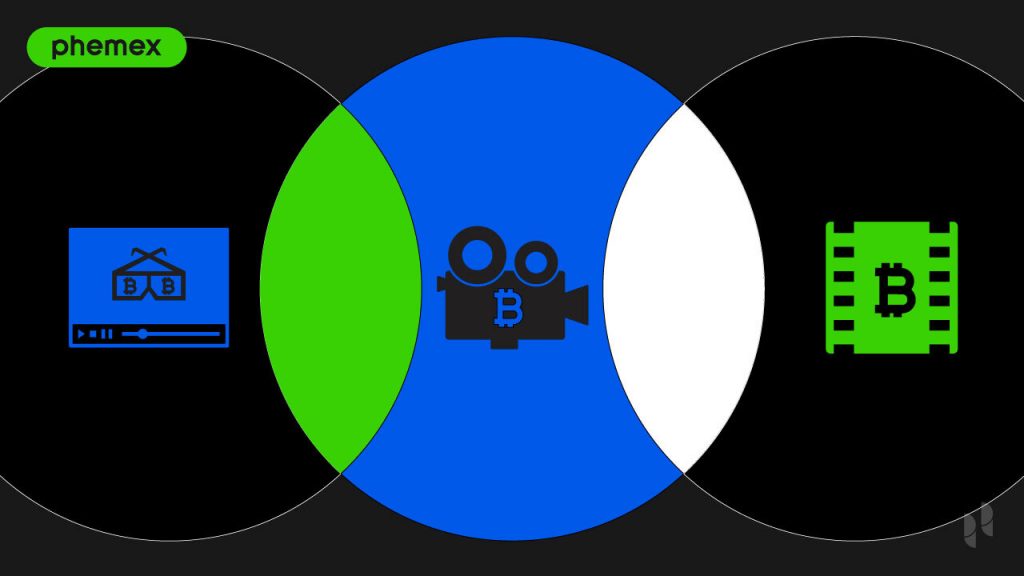 Moreover, since cryptocurrencies and blockchain technology are relatively new, there aren’t very many established or well-known filmmakers that have made quality educational and entertaining movies. Thus, creators have plenty of reasons to bring more video crypto-related content to the market.

Nowadays there are also multiple mediums creators can use to release video content. For example, many cryptocurrency exchanges and crypto news websites have already launched YouTube accounts that release daily and weekly cryptocurrency videos. In addition, there are a decent amount of well-made crypto documentaries that have been released on YouTube. Therefore, the groundwork trends are in place, and as a result, more filmmakers and writers will likely race to the industry to release more movies.

The crypto industry is a moneymaker, thus, this gives movie makers all the more reasons to create good cryptocurrency films for consumers to watch.

One popular entertainment channel that features popular and high-view content is Plot11: Crypto Economy Infotainment, which is a streaming service for documentaries on digital economy and finance-related topics like blockchain, Bitcoin, cryptocurrencies, artificial intelligence, big data, deep learning, and robots.

The first film, The Rise and Rise Of Bitcoin (2014) follows a computer programmer who becomes fascinated with the digital currency Bitcoin, and through his involvement in the Bitcoin community, we learn about the impending global impact of this amazing new technology.

The second film, Bitcoin: The End of Money As We Know It (2015) traces the history of money from the bartering societies of the ancient world to the trading floors of Wall Street. Essentially, the documentary exposes the practices of central banks and the dubious financial actors who were responsible for the last crisis. It highlights the government’s influence on the money creation process and how it causes inflation. Moreover, the film explains how most money we use today is created out of thin air by banks when they create debt.

Another film called Magic Money: The Bitcoin Revolution, done by filmmaker Tim Delmastro, sets out to unmask the mysteries of Bitcoin by discovering where it came from, what’s happening with it now, and where it could lead us in the future.

Besides these documentary films under Plot11, plus Magic Money, there are various others to highlight.

For example, Ian Kan’s Blockchain City (2018/2019), is the story of cities around the world and their shift towards being technologically powered through blockchain. If features interviews from leading governments worldwide that have implemented blockchain technology (The Netherlands, Estonian, and Dubai governments).

Another one is Mike Maloney’s Hidden Secrets Of Money, which is an educational series that explains all things money. The series discusses gold and silver, central banking, wealth cycles, deficit spending, monetary history, Bitcoin and cryptocurrencies, blockchain technology, and much more. The series has 10 episodes, with each episode covering a specific topic. Mike Maloney also has his own YouTube channel at Goldsilver, which has almost 650,000 subscribers. His channel’s main focus is financial education.

Most Anticipated Movie On Crypto Of 2022

Netflix posted last month that they will be featuring a cryptocurrency documentary in 2022 titled: “Trust No One: The Hunt For The Crypto King,” which will shed light on the story about a deceased crypto exchange CEO who mysteriously passed away in 2018. 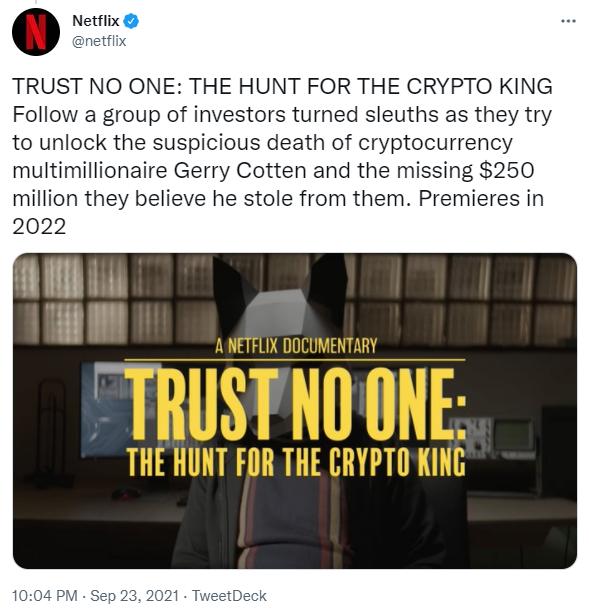 What Is The Future For This Type Of Crypto Content?

Most of the crypto documentaries and films above approach the subject from an educational perspective. This is logical when considering the fact that so much of crypto is new and thus confusing, which naturally creates a need and a market to have it explained. Moving forward, the industry needs more educational crypto films to not only inspire future generations but also educate investors looking to break into the industry.