What is STEPN (GMT): A Web3 Lifestyle App

Launched in August 2021, STEPN (GMT) is a Web3 Move-to-Earn (M2E) health and fitness application with interesting Game-Fi and Social-Fi elements. This project has managed to upgrade an old concept of exercising to Move-to-Earn, which is fully functional and very popular in the crypto world. Furthermore, it aims to promote socializing and help users nourish a healthy lifestyle. At the time of writing, GMT trades at $4.09 per token with a circulating supply of 600 million, leading to a total market cap of more than $2.4 billion. How Does STEPN Work?

STEPN is a Web3 lifestyle app built around an essential daily activity for almost everyone in the world – moving around. After downloading the app, users need to connect their wallets and transfer Solana (SOL) crypto to purchase NFT sneakers. SOL is the main currency used by the STEPN app, while the NFT sneakers are the prerequisite for users to start their journey with STEPN.

Users can connect their app with the sneakers and then walk around or jog outdoors to earn points regardless of where they are. These points are game currency (GST token) which will then be used for various rewards such as upgrading sneakers or NFTs, leveling up, or cashing out the money in the real world.

The advanced functions of the token include the implementation of the NFT sneakers in solo mode and gaining tokens by moving around regardless of the location. Earning GST involves energy which is calculated through your steps in the app. The default formula is as follows: 5 minutes of movement or movement gain can generate one energy. However, it’s noteworthy that energy can only be reloaded under the circumstance where the user has already bought an NFT sneaker.

Users can see their status on the app interface, which will show their current position, be it walking or jogging. They may also receive another notification named moonwalking which reveals the use of a vehicle or any means of transport other than their body to travel. In this case, they will not earn any tokens, be it GST or GMT, as this goes against the purpose of STEPN being a health-promoting community.

Elements and Features of STEPN

The STEPN ecosystem applies a dual-token economy model, which mainly caters to the need for fundraising and utility. Two tokens are currently available for users to earn through different methods.

GMT is the native token of the STEPN ecosystem and has a limited supply of six billion tokens. Users can gain it in different ways, such as through the Token Generation Event (TGE), where it’s minted.

GMT vesting mechanism is as follows: 30% of the total GMT will be allocated to users through Move & Earn and governance participation. In order to maintain the durability of the project, the total release of GMT will halve every three years.

Meanwhile, in terms of the GMT earning mechanism, GMT earning is only available to Sneakers that reach Level 30. Also, it’s a mandatory requirement that users need to have at least three energy to begin earning GMT. In addition, STEPN created the so-called Einstein Mechanics, in which the system regularly adds randomness to users’ GMT earnings. This makes the process of earning GMT unpredictable. It should be noted that GMT’s settlement is typically done every several minutes to avoid any extrapolation of earnings.

Plus, there are also Bitcoin Mechanics and Comfort Mechanics. The former generally indicates that the GMT earning per user is pro-rata, which is similar to the difficulty bomb in the Bitcoin and Ethereum ecosystems, but GMT settles instantaneously. In other words, the more users earning GMT at a specified time, the less GMT earning will be allocated to each user and vice versa. The latter simply means that the more Comfort, the higher the earnings. At present, the Comfort value is still under development.

GST is an in-game utility token used to buy goods in the app. Unlike the GMT token, GST has no limit in terms of supply and can be minted in the game through basic movements.

Moreover, 60 million GST was created to provide liquidity for the project. Most of the tokens were added to liquidity pools such as Orca and Pancakeswap (CAKE), while the rest were locked in BNB Chain to serve the purpose of a cross-chain bridge between Solana and BNB Chain.

Though GST enjoys unlimited supply, both GST and GMT have a burn mechanism in place to encourage more and more users to live a healthy lifestyle. This burning process is used to lessen the circulation of both GST and GMT through various in-app activities.

For the GST, it’s burned by sneaker-minting, repairing, leveling up sneakers, gems upgrade, and also unlocking sockets. The higher the sneaker’s level or quality, the higher the repair cost. Repairing is related to resilience, a sneaker attribute. Gems and sockets are Game-Fi elements of STEPN. Users are able to unlock different gems and sockets when their sneakers reach certain levels.

On the other hand, the GMT burn mechanism is relatively more complex. It can be divided into three groups, namely NFT, enhance in-app mechanics, and Schadenfreude Pools. For instance, under the NFT group, users can burn GMT to mint Rare, Epic, and Legendary Sneakers or redistribute Attribute points. Under the enhance in-app mechanics group, users can burn GMT to permanently increase GST Daily Earning Cap or improve all Gem upgrades’ success rate. Lastly, Schadenfreude Pools are where the users can subscribe to burn GMT and constantly earn GST returns from other players’ misfortune moments, like receiving a lower quality sneaker from a higher quality shoebox or unsuccessful upgrade gems.

Who Is Behind STEPN?

STEPN was created by Find Satoshi Lab, a fintech firm located in Australia. This project became the winner of the Gaming Track in the 2021 Solana Ignition Hackathon. It’s also a member of the DeFi Alliance Gaming cohort, where DeFi Alliance is a leading Web3 accelerator and founder community.

Jerry Huang and Yawn Rong co-founded STEPN. Huang, an alumnus of Zhejiang University with a major in computer science, initiated this project in August 2021. Previously, he had co-founded Falafel Games, a pioneering developer, and publisher of core Strategy and Role-playing games (RPG) in the Middle East.

Rong is an alumnus of the University of South Australia with a master’s degree in advertising and public relations. Prior to founding STEPN, he was the co-founder of Crypto SA, a business consulting firm for blockchain start-ups. Currently, he is the industrial representative in the South Australian Blockchain Association as well as the business ambassador for Algorand, a US-based blockchain infrastructure provider.

Jessica Duan is the Chief Strategy Officer (CSO) of the company. She is an alumnus of the University of Adelaide, majoring in architecture. Meanwhile, Ryan Turner is the lead designer of STEPN. Before joining the company, he founded his own design firm, Malicious Delicious, in 2006.

On the other hand, STEPN is backed by several partners, including some big names in the crypto world. These include Sequoia Capital, Folius Ventures, Solana Ventures, as well as Alameda Research. 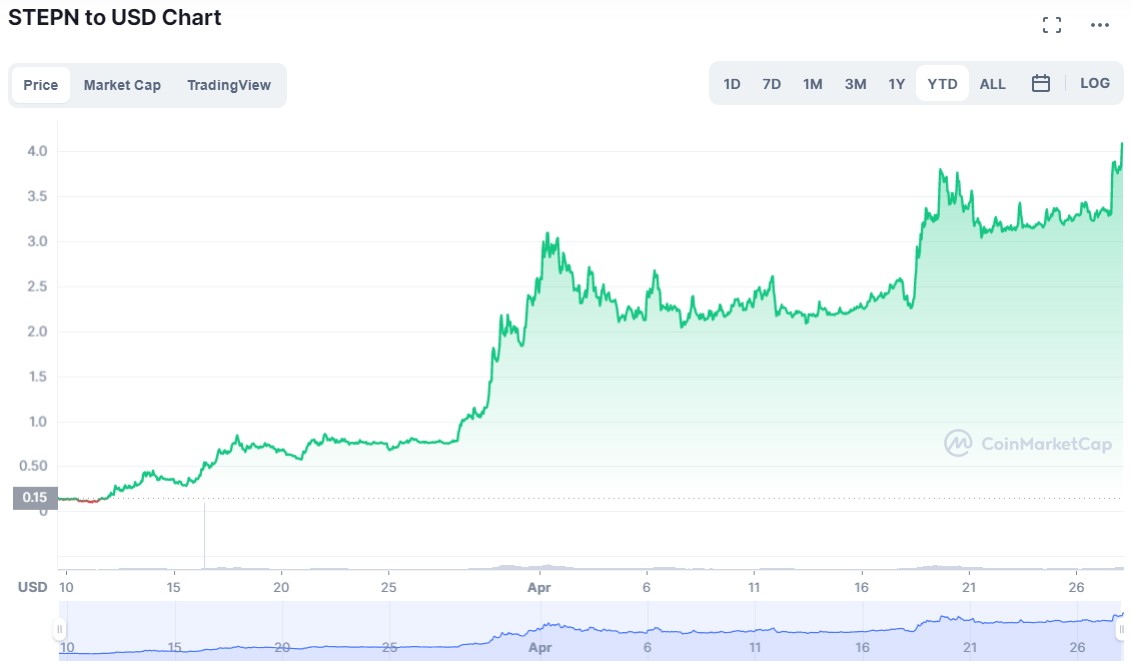 The crypto market has encountered several crashes in 2022. The market cap was more than $3 trillion in the last quarter of 2021. Yet, the current overall crypto market cap is slightly below $2 trillion, a reduction of over $1 trillion in the last four months. This bearish downtrend can be attributed to multiple global events, including the Russia-Ukraine conflict, nations tightening their regulations on cryptocurrency as well as the rate hikes by US Fed.

However, it looks like GMT has not been greatly affected by these crashes as its bullish uptrend carries on until now. This might be due to the hype surrounding decentralized finance (DeFi) projects that grant users tokens for staying active. According to the data on CoinGecko, the prices of GMT and its rivals, such as Genopets (GENE) and dotmoovs (MOOV), skyrocketed on a 24-hour adjusted timeframe.

In addition, STEPN’s recent earnings report also powers the GMT price surge. The official data shows that STEPN made a profit of over $26.81 million from “royalty fees” and its NFT Sneakers’ sale in the first quarter of 2022. STEPN has a tax and fee system in which it charges varied taxes and fees to various in-app activities. The royalty fee is payable to the NFT creators.

To be specific, users with NFT sneakers can play STEPN and earn GST. Then, they can exchange their GST rewards for SOL or USD Coin (USDC). Meanwhile, the project team utilizes the profits to first buyback GMT from secondary markets, like exchanges and over-the-counter (OTC) platforms, and burn them on-chain later. This measure effectively removes these tokens from circulation out of the 600 million GMT in total.

At the time of writing, GMT trades at $4.09 per token with a circulating supply of 600 million, leading to a total market cap of more than $2.4 billion. GMT currently ranks #52 on the cryptocurrencies market capitalization leaderboard of CoinMarketCap.

What Is the Future of STEPN?

STEPN popularizes the concept of X to earn, leading to the remarkable emergence and growth of the market. In fact, STEPN is now the most valuable Move-to-Earn (M2E) project, with a market cap over $2 billion.

Yet, it also has some drawbacks, like the price inflation of sneakers and GST. STEPN’s rapid growth can overshadow all these issues in the short run. But this is just temporary. When the growth retards, these issues will be exposed.

In light of this condition, the STEPN team will introduce an NFT sneaker rental system in which the users can play the game by just renting the sneakers. This new system will tackle the issue of the high floor price of the sneakers and enable more users to join the game.

However, leasing digital assets in Play-to-Earn (P2E) games, STEPN’s predecessor, has invited criticisms of creating “digital serfdom.” It is a situation where players who cannot afford the NFTs necessary to play these games rent from third-party lenders, who then subject these players to long hours of gameplay with little rewards. This remains a potential issue that STEPN has to solve.

How To Buy GMT on Phemex?

Phemex offers both spot and contract trading for investors to choose from. However, for beginning crypto buyers, spot trading is recommended. To buy GMT on Phemex, follow the instructions below.

1. The first step to buying cryptocurrency on Phemex is to go to the Phemex homepage, register for an account, and select Markets.

2. On the Markets tab enter GMT into the search bar on the top right, immediately after, the GMT/USDT trading pair will appear below – select Trade to move on to the next step.

3. You will then be redirected to the Phemex trading platform for the GMT/USDT pair. To do a simple spot trade we recommend doing a market order where you can buy GMT at the market price. To do so, select Market, enter the amount of USDT you want to buy of GMT, and click Buy GMT.

STEPN (GMT) is a Web3 Move-to-Earn health and fitness application with interesting Game-Fi and Social-Fi elements. It is built around an essential daily activity for almost everyone in the world – moving around. STEPN’s GMT is currently still in a bullish uptrend, and it is now the most valuable M2E project with a market cap greater than $2 billion. Yet, the price inflation of sneakers and GST remains a drawback that might affect this project’s future growth and development.