What is PancakeSwap: A DEX and Automated Market Maker Launched in September 2020, PancakeSwap is a decentralized exchange (DEX) and automated market maker (AMM). It is currently the most successful DEX on the BSC. PancakeSwap is powered by the CAKE token, which currently trades at $19.86 and has a market cap of around $3.5 billion.

As an automated market maker (AMM), PancakeSwap is es sentially a platform designed to provide liquidity to the crypto market. Similar to a market maker in equity markets, an AMM ensures that there’s always a buyer and a seller for each trade. The difference here is that instead of a single corporation or entity having the power and special privileges of a market maker, an AMM is a decentralized application (DApp) in which liquidity is provided collectively by users and routed by an algorithm. Users can provide liquidity for trading a specific pair of cryptocurrencies by staking coins in a liquidity pool (LP). In return, they typically garner a significant yield on the amount they have staked.

What is an AMM?

AMMs have become a popular form of decentralized finance (DeFi), with the first and most successful examples being Ethereum-based protocols such as UniSwap (c. 2018). PancakeSwap is largely based on UniSwap, but runs on the BSC. It is one of multiple AMMs (e.g., BakerySwap and ApeSwap) that have launched on the BSC in the past year. Besides benefitting from the BSC’s relatively low transaction fees, PancakeSwap also offers lower trading fees than UniSwap (0.2% vs. 0.3%).

What is the CAKE token?

PancakeSwap is powered by its native token CAKE, a BEP-20 token running on the BSC. Users can stake the CAKE token in LPs called “Syrup Pools” to earn additional tokens. Users can also stake LP tokens to earn CAKE, which involves a higher risk of volatility but a higher return rate. New LPs are regularly announced by the PancakeSwap team. Staking has proved lucrative for users, with some LPs offering annual returns as high as 1300%. However, such high returns also carry negative risks of inflation.

Unlike other native DEX tokens, CAKE has no hard supply cap. It currently has a circulating supply of around 165 million. To mitigate inflation downsides, the platform has a set of built-in deflationary mechanisms to burn (i.e., remove from the supply) a significant proportion of the CAKE tokens that are minted daily. For example, these mechanisms burn half of the 40 CAKE created per block, and a portion of any CAKE spent on lottery tickets, prediction bets, trades, and so on. Even with these mechanisms, though, a net of around 530,000 new tokens are minted daily.

Like other prominent DEXs, PancakeSwap also includes some gamification features. It offers a CAKE lottery with more than 11,000 daily players, a BNB price prediction betting system, and trading competitions. Users can also win NFTs to either trade for CAKE or keep.

Like other DeFi platforms on the BSC (e.g., BakerySwap), PancakeSwap was created by anonymous developers supported by Binance. In 2020, the project received funding from  BSC Accelerator project. As of February 2021, PancakeSwap’s development team had grown to 14 persons in total, including former BSC employees. During this period of growth, the platform has been seeking to recruit additional salaried team members. In total, 0.03% of all CAKE tokens minted are placed in the PancakeSwap Treasury, which is used by the developers to run the platform. 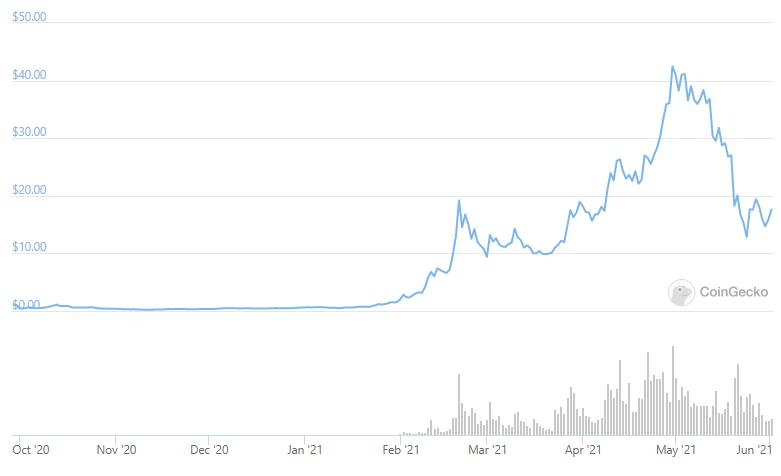 Since its launch in 2020, PancakeSwap has become very successful along with other DEXs running on the BSC. This is primarily due to the relatively low transaction fees and high transactions per second (TPS) on the BSC. Many users have migrated to the network to avoid the famously high fees that Ethereum-powered DEXs charge during times of peak network demand.

PancakeSwap made headlines in April 2021 when its total value locked (TVL) surpassed that of UniSwap. PancakeSwap is the most popular DApp on the BSC, with more than 330,000 active users. It currently has a total of around $7.75 billion staked on the platform by users.

The value of the CAKE token has also grown rapidly. At the start of 2021, the token was worth around $0.65 USD. In late April, it reached an all-time high of $43.92 — a 6657% increase — before dropping to as low as $11 during the recent crypto market pullback. Its fortunes have started to rise somewhat again toward its current price of $19.86.

The CAKE token has a circulating supply of nearly 177 million and a market capitalization of around $3.5 billion USD. For comparison, the token of PancakeSwap’s largest competitor, UNI, has a market cap of around $15.2 billion USD. While PancakeSwap is still substantially smaller than its main competitors, its rapid growth remains remarkable — especially compared to its competitors within the BSC ecosystem. For instance, BakerySwap has had a similarly meteoric rise in 2021, but its market cap sits at around $1 billion, making PancakeSwap about 3.5 times larger. PancakeSwap has proven itself a strong performer in the competitive space of DEXs and AMMs.

What Is the Future for PancakeSwap?

PancakeSwap’s outlook appears relatively healthy in the short term. It remains the most popular DEX on the BSC, and in a relatively short period, it has become a high-profile platform mentioned alongside Ethereum-based giants like UniSwap and SushiSwap. As mentioned above, a reason for this meteoric rise has been the competitive advantage the BSC offers in terms of transaction fees.

However, this situation could change in the medium to long term with wider shifts in the crypto space. Notably, Ethereum is undergoing two major upgrades this year that could significantly impact the BSC’s competitive edge.

The first proposed change is EIP-1559, which will happen in July. This upgrade will overhaul Ethereum’s transaction fee structure to avoid the current bidding system, which users have found troublesome and unreliable at times.

The second and larger change is the switch to Ethereum 2.0 later this year, which will switch the entire Ethereum network over from a proof-of-work (PoW) consensus system to a proof-of-stake (PoS) consensus system. The so-called 2.0 beacon chain already launched in December 2020. The major change later this year will involve merging this chain with Ethereum’s mainnet. Once this is complete, Ethereum’s developers intend to introduce sharding, which will significantly increase the throughput of the network and thus help resolve Ethereum’s well-known scalability issues.

If successful, these changes could effectively negate the BSC’s competitive edge and that of its DEXs. The BSC operates on a consensus system combining delegated PoS and proof-of-authority (with users’ votes for consensus being based on their identity, instead of the value of their staked funds). This system essentially increases the throughput of the network, but at the cost of decentralization.

The BSC has only 21 validators, which increases the network’s vulnerability to attacks or the influence of centralized actors (including its company, which created the network and based it largely on Ethereum). In contrast, Ethereum 2.0’s beacon chain already has more than 33,000 validators. Accordingly, some have termed the BSC’s DApps as paradoxically constituting “centralized DeFi.”

The BSC has already faced some security-related issues. The network’s DeFi protocols have recently experienced several hacks and attacks, one of which was facilitated by a flash loan obtained on PancakeSwap.

Despite its drawbacks, Ethereum already enjoys a first-mover advantage in the field of smart contracts and DApps. If the upcoming network changes mitigate the scalability and transaction fee issues, PancakeSwap could be affected by the loss of BSC’s competitive edge. Alternatively, both networks could continue to coexist and cater to different types of users.

Outside of the major Ethereum DEXs, PancakeSwap also faces competition from other BSC-based DApps such as BakerySwap. Multi-chain DEXs have additionally grown in status, such as MDEX. MDEX recently expanded from Ethereum and the HECO to the BSC, and has since gained significant market share on the latter chain in a short period of time. PancakeSwap’s significant inflation also could lead to issues in the long term, making it less lucrative to hold the PancakeSwap coin as time passes.

In the rapidly-evolving world of DeFi, it can be hard to predict which platform will win out next. But as long as the BSC remains competitive, PancakeSwap seems poised to enjoy further success among users for whom network decentralization isn’t a chief concern.

PancakeSwap is a rising star among DApps on the BSC and enjoys a significant competitive advantage over other major DEXs due to the BSC’s relatively low transaction fees, thus, it has grown very quickly in 2021. It is currently the most successful DApp on the BSC, and will likely retain its prominent position among competitor DEXs and AMMs in the near term.

However, the crypto space is both cyclical and constantly evolving. PancakeSwap’s growth could suffer if Ethereum’s upcoming migration to Ethereum 2.0 mitigates the BSC’s transaction fee advantage. Depending on what a given user values, the BSC’s relatively centralized network could also be cause for concern, as it increases susceptibility to attacks and governmental regulatory efforts, as compared to more decentralized networks. Only time will tell whether PancakeSwap will continue to thrive in the constantly-changing world of crypto technology and global markets.