What Are Steem (STEEM) and DTube? – Decentralized Social Media in Action

Blockchain technology is being applied to an ever-growing number of areas. Social media, being one of the leading online phenomena of our times, is no exception.

Steem (STEEM) is a blockchain platform designed for various social media use cases. Its primary decentralized app (DApp) is Steemit, a social media blogging platform. Another popular app on Steem is DTube, a video sharing and streaming social media platform, believed by some to be a future challenger to YouTube.

The Steem blockchain uses a number of crypto coins to support its operations, with the primary coin being STEEM. The STEEM coin trades at around $0.60 with a circulating supply of nearly 394 million tokens, for a market cap of approximately $239 million. What Is Steem (STEEM)?

Steem is a blockchain focused on hosting decentralized social media projects. It features fast execution times and no transaction/gas fees thanks to its own variation of the Delegated Proof of Stake (DPoS) block validation method.

Under Steem’s DPoS block validation method, platform users vote for up to 30 “witness nodes,” the nodes that get the right to verify transaction blocks. The top 21 candidate witnesses are selected to verify blocks for a period of 63 seconds. Each block gets verified in just three seconds, which makes Steem more than twice as fast as Ethereum (ETH) and Bitcoin (BTC). 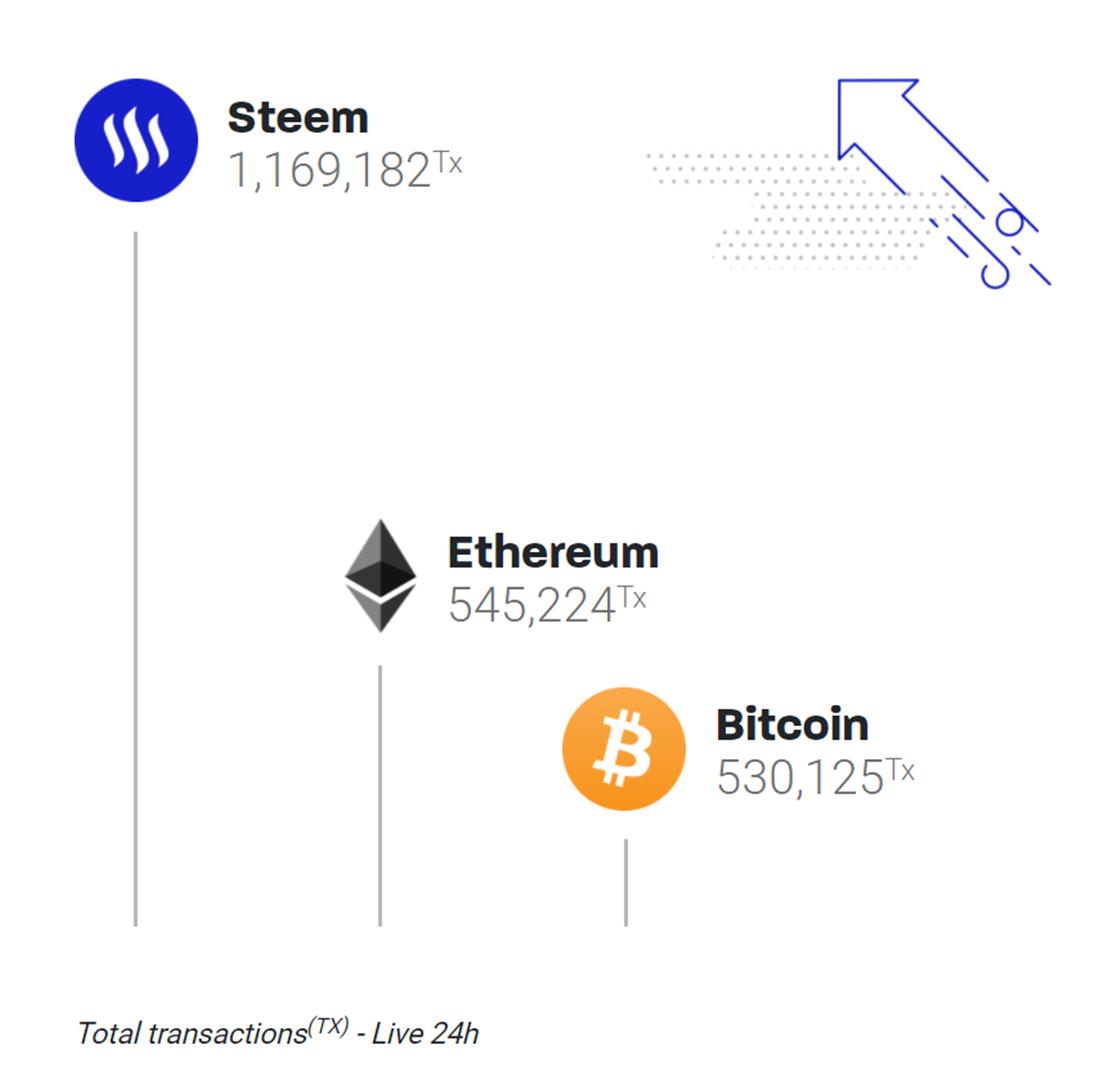 How Does Steem Work?

Steem’s primary app and interface to communicate with the underlying blockchain is Steemit, a decentralized blogging and content sharing platform. Steemit users can earn crypto by adding, sharing, and upvoting content.

Steem uses three crypto coins in total. The main cryptocurrency of the platform is STEEM. This is the crypto commonly used to reward content creators. It acts as the main transactional coin on Steem and apps such as Steemit.

The second coin is Steem Power (SP), which may be bought for STEEM. SP ownership gives you additional voting power on the platform. This has nothing to do with the governance voting power commonly thought of when someone hears the term “voting” in the context of blockchain. But rather, the voting power obtained with SP coins refers to the weighting given to your vote with regard to content promotion. As an SP token holder, any content you upvote has a higher chance of moving to the top of the popularity ladder. The more SP you have, the higher your upvoted content moves in the rankings on the platform.

The third coin used on Steem is Steem Dollars (SBD). It is a stablecoin pegged to the US Dollar at a rate of 1:1. You may buy SBD with STEEM if you would like to store your crypto in a stable asset.

DTube is a video sharing and streaming social media platform based on the Steem blockchain. Similar to Steemit, users can earn crypto rewards by creating, sharing, and upvoting content on the platform.

DTube’s functionality is similar to that of its powerful rival, YouTube. The key difference, of course, is that DTube is a blockchain-based platform while YouTube is not. Some industry observers believe that DTube might eventually become a viable competitor to YouTube.

They point out a number of advantages that DTube holds over the world’s largest video streaming platform.

Along with its advantages, naturally, DTube has some disadvantages in comparison to YouTube. The key ones are:

Who Is Behind Steem?

Steem was founded in 2016 in New York by American blockchain entrepreneurs Ned Scott and Daniel Larimer. Scott acted as the project’s CEO, while Larimer was the CTO. In 2017, Larimer left Steem.

Scott spearheaded the project until early 2020, when Steem was sold to famous blockchain and cryptocurrency entrepreneur Justin Sun. Justin Sun is also the founder of the Tron (TRX) blockchain.

The current Managing Director for the Steemit platform is American marketing and communications professional Elizabeth Powell.

There is no verified information about any external funding raised by Steem or Steemit, apart from the acquisition of the platform by Justin Sun’s Tron. The amount of the acquisition deal has not been publicly disclosed. Both Steem and Steemit continue their operations after the acquisition.

STEEM was launched in April 2016, and traded under $1 for the first three months on the market. In July 2016, the early enthusiasm about the platform led to a short-lived spike in the coin’s price to around $4 levels.

By August 2016, the coin was back at below $1. In late 2017, STEEM started rapidly gaining in value as the overall cryptocurrency market swell. By early January 2018, around the time of the market peak, STEEM achieved its highest ever rate of $8.

STEEM never regained its glory-day rates and has largely traded under the $1 mark since then. It is currently valued at around $0.60.

The price of STEEM from its launch in April 2016 to November 2021 (Source: CoinMarketCap.com)

What Is the Outlook for Steem?

The outlook for Steem is somewhat uncertain. The platform offers a great and much-needed service. However, the ability of Steem to grow larger and acquire a substantially wider user base is doubtful.

While blockchain-based social media is a great concept, Steem’s product is in direct competition with the social media giants operating away from the blockchain world – Meta, YouTube, Instagram, and others. Attracting users away from these platforms to Steem might be a massive task.

Steem uses Steemit as its main product and interface. Steemit’s user interface is currently a far cry from the rich, functionality-filled interfaces of the social media titans that Steemit hopes to compete with. There is definitely more work to be done in this area if Steemit hopes to grow into something more than a small project.

The acquisition of Steem by Tron is another issue adding uncertainty to Steem’s future. If Steem succeeds in expanding its user base, will Tron continue supporting the project, or will it try to integrate Steem into the wider Tron platform, getting rid of the Steem brand in the process?

Tron is a versatile and powerful blockchain network. The platform’s technical capacity is more than enough to integrate or replicate Steem’s operational model. If Steem gains traction in the market, Tron might just decide to appropriate the business model by imposing its own branding on the project.

Naturally, Tron might decide to go the opposite direction and completely support the future development of the Steem/Steemit platform. However, this is simply a guessing game at the moment. Since Steem is an acquired entity, its future is largely in the hands of its parent company and its future preferences.

Steem is a blockchain supporting social media-focused apps. Steem’s primary product is Steemit, a decentralized social media blogging platform. Users can monetize their content on Steemit with the STEEM coin.

DTube is a video sharing and streaming app on Steem that aims to offer a user experience similar to that of YouTube. Content providers can earn cryptocurrency on the app by contributing their video content. Similar to Steemit, DTube users earn crypto rewards by uploading, sharing, and upvoting content.

Steem was acquired by Tron in early 2020 but continues to operate without much interference from its parent company.

Both Steemit and DTube have formidable social media competitors outside of the blockchain environment. For DTube, the key competitor is YouTube. For Steemit, social media platforms such as Facebook and, to lesser extent, Instagram, are among the competition. Whether competing with these giants is practically achievable for DTube and Steemit is a big question and remains to be seen.