What is Position Trading: The “HODL” Alternative for Bitcoin Trading 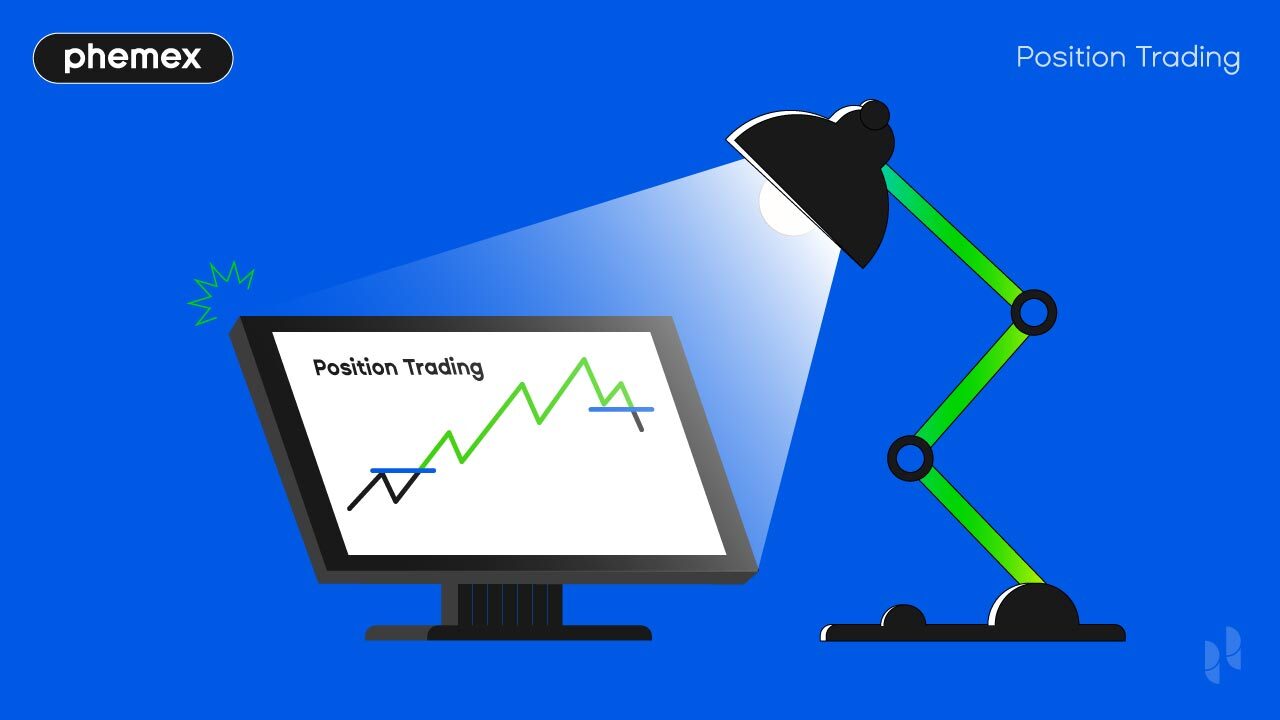 What is Position Trading?

Position trading is a long-term trading strategy for Bitcoin (BTC) and altcoins. Position trading is an alternative to the HODL strategy. A position trader identifies a trend in the market such as an upcoming bull run and opens a trade. He then keeps the trade open for months or years.

Position traders use tools such as Moving Average (MA) indicators that show Bitcoin price movements over many months or years. This helps them identify major trend reversals to base their trades on. MA crosses such as the 50-day and 200-day average are often used in Bitcoin position trading.

If a position trader identifies a new trend, they place a trade and sit on it for the long term. If the trade ends up profitable, they gradually take profit. If a trade ends up at a loss, they keep the trade until it recovers to positive PnL or they close the trade.

Position trading is your best bet if you are a beginning trader and don’t want to deal with the nerve-racking reality of daily price fluctuations. In essence, this type of trading is the opposite of day trading. It is a recommended technique for traders who want to trade stress-free.

Position traders have a similar mindset to stock market traders who hold a position for longer until they make a profit. Their mindset is similar to Bitcoin maximalists who often refuse to sell their Bitcoin for years at a time.

Profitable trades are never closed unless the trader chooses. A trader could technically keep a trade going indefinitely until they’re satisfied with their returns.

How Does Position Trading Work?

Position trading involves researching Bitcoin market cycles, identifying trends in the markets, and opening a trade at the right time. Bitcoin cycles are the best way to illustrate how position trading could work in practice.

Bitcoin has a 4-year halving rate. To date, Bitcoin has been in 3-year bull cycles and 1-year bear cycles. If a trader observed these patterns and carefully positioned their long trades before the start of a bull cycle, they could potentially earn hefty profits. 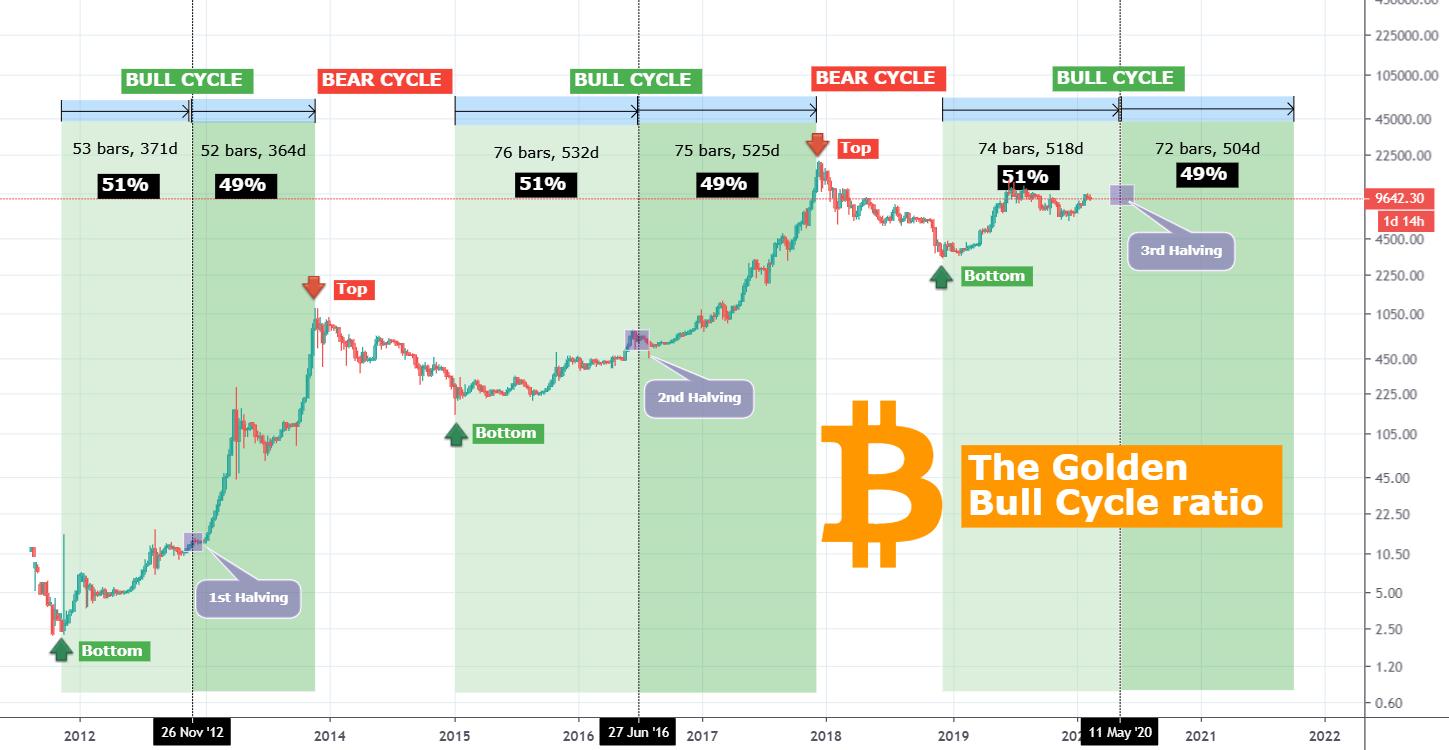 In December 2020, Bitcoin reached the $20,000 price level for the first time since the 2017 run. If a trader opened a long at that time, they would make easy profits on long trades until Bitcoin reached $65,000 in April. This is an example of ideal position trading.

The timing between cycles could have an effect of a trader’s profits. During the Covid dip, Bitcoin dropped to a low of $3500 in early 2020. Traders that longed that dip and kept their trades open until Bitcoin reached $65,000+ in less than a year have made returns of over 15x without leverage.

Traders who longed Ethereum since the Covid dip made even higher profits. Ethereum dipped to a low of $88 and peaked at around $4,800, leaving a 50x return for traders who longed the Covid dip. Altcoins can often provide higher returns than Bitcoin because they have a lower market cap and they are easier to move.

These moves reflected in other asset classes such as stocks, forex, energy, and others. Traders who profited from this change would need immense patience not to close their trades when they first became profitable.

To position trade successfully, traders need to do fundamental research and focus on the big picture. Position trading requires significant time commitments to study the price history of the crypto and prepare the position. Once the position is open, the trader will sit on it for months — this is why preparation is essential.

There are no standards to position trade. Some traders might follow Bitcoin bull-bear cycles and wait for a bear market start to short. Others might wait for a bull run to initiate and go long. The trader should pick a strategy based on his skillset.

These moving averages can help a trader draw trend lines. They are available on Phemex: 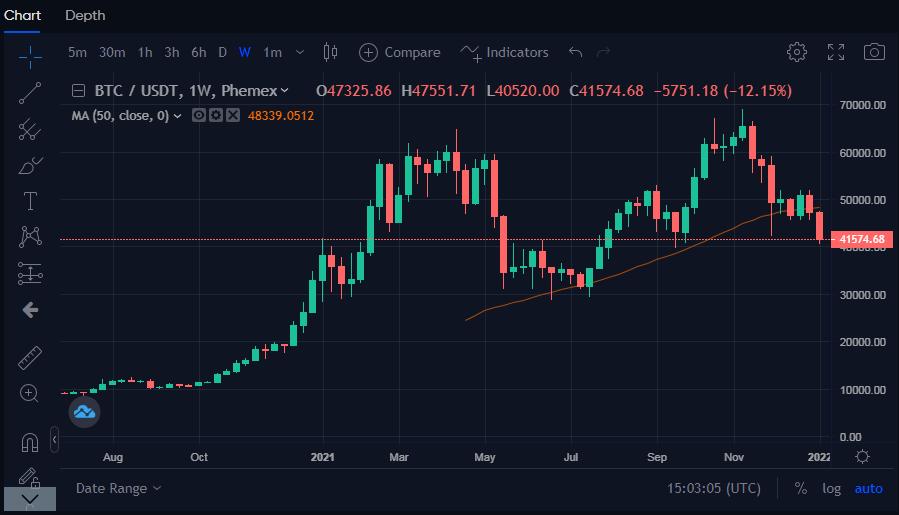 In the example above, we selected a moving average of 50 weeks. This indicator informed us that Bitcoin recently broke down below the support line, which could signal the start of a bear market.

The moving average automatically adjusts based to the chart selected. If a trader switches from weekly to daily moving average, the support line will shift from a 50-week to a 50-day average.

If a trader is focused on long-term movements, they don’t have to worry about daily or weekly price fluctuations. Imagine you couldn’t close your trade for one year: would you go long or short on Bitcoin? Use the moving average and trend indicators as data to back up your decision.

Position trading will help you filter out the market noise and focus on the big movements. You will also save on trading fees because you have to place fewer trades for position trading.

In both swing trading and position trading, the idea is to buy low and sell high. When you are swinging, your goal is to swing long enough to lock in profits but take profit on time to avoid getting stopped out. Both strategies require base-level technical analysis skills.

In position trading, you do the same thing as a swing trader but with delayed gratification. Position traders often take much larger profits than swing traders. As time goes on, you take profit on the way up if you’re longing or on the way down if you’re shorting.

What Are The Downsides To Position Trading?

Position trading creates an opportunity to make large profits, but there are some risks involved. Potential losses may be incurred if the market moves against you.

Position traders need to monitor trend reversals closely in case of violent price shifts. If the trader is long and Bitcoin drops by 40-50%, this is often a sign of a major trend reversal.

Position traders are often all-in on a position and have low liquidity to open new trades. You may miss out on other promising projects if you take one position that you have to sit on for months at a time.

If a trader uses leverage, they increase the risk factor significantly. While successful leverage traders can make fast gains, those gains can be wiped out if the market moves against them. The ideal leverage for position trading in 2-3x. This significantly lowers the risk of liquidation.

How To Protect Your Capital?

The only way to protect yourself in position trading is to use stop losses and set take-profit orders at certain intervals. Placing advance orders on your trade can help you avoid losing money due to large price swings of Bitcoin or other volatile cryptos.

Longing Bitcoin or other crypto has proven a lot more successful. Since Bitcoin first started trading in 2010 for sub-pennies and reached $69,000 in 2021, it made a 6.9 million x return for the earliest holders.

If a person invested $10,000 and longed Bitcoin from the time it was $1 in 2010 until it reached $69,000 in 2021 (11 years), they would make over $69M without leverage. On the long-term logarithmic chart, Bitcoin has gone up vertically for the last 10 years and became the highest-appreciating asset of all time.

If a trader longed Bitcoin for 10 years in a position trade (or held it in cold storage), they would be in profit for millions of percent. If a trader shorted Bitcoin at any point in history, they would be a loss within days or weeks. Bitcoin only dipped -80% less than 20 times in its entire existence.

Lengthening cycles can also affect a trader’s ability to short effectively. For example, let’s say a position trader shorted Bitcoin during the April all-time-high of $65,000. If their position was in profit throughout the spring and summer, they might feel emboldened and double-down on their shorts.

However, in October and November, Bitcoin quickly recouped to its previous all-time-high and made a new high of $69,000. The trader’s position would be at a net loss despite being profitable for half the year.

Is It Better To Long or Short Bitcoin?

Historically, it has proven better to be long on Bitcoin, considering the price-performance history of the asset in the last decade. Bitcoin and the crypto industry outperformed stocks, indexes, precious metals, and all other speculative assets.

What Are Alternatives To Position Trading?

Dollar-cost averaging is the main alternative to position trading. It lets you invest regularly over time without having to worry too much about market movements. Instead of trying to predict when the market will move up or down, you buy an equal number of coins every month or quarter.

By doing this, your total investment evens out as the price fluctuates. At one point you’re buying cheap Bitcoin, and at another you’re buying expensive Bitcoin. In the end, your average buy price evens out between the high and the low.

The tough part about DCAing is that you have to plan your exit strategy and call the top. It requires extensive studying of market trends and understanding market cycles.

Reading technical charts can also help you exit at an appropriate time. Investors often monitor oversold and overbought regions (RSI) to time the top and bottom.

Bitcoin price fluctuations can be violent, but if you are only interested in the longer term trends, then you shouldn’t worry too much about the day-to-day fluctuations. Position trading is the best way to trade stress-free.

One of the most important parts of self development and trading is delaying gratification. People who have held Bitcoin for the last decade have made massive profits thanks to delaying their gratification — significantly more than those of people who trade for the short term.

Position trading teaches a trader how to make long-term bets based on their analysis of the market. It’s an optimal trading technique for both amateurs and professionals, because it only involves basic TA concepts such as moving average and market cycles.

If a trader takes a certain position, and if the market is growing in the long term, they will be more likely to be at a profit when they hold long. Additionally, the more profit a trader makes, the easier they find it to hold their positions open for a longer time.