If you’re new to cryptocurrency and you’ve asked around for advice, you’ve probably been told more than once to HODL Bitcoin, or HODL your crypto, and had no idea what that meant.

What does HODL mean?

Simply put, it means to hold on and not sell. In true internet fashion, this key cryptocurrency term sphere is derived from a drunken rant on a Bitcoin forum. Check out the original post above and here.  Some people have also declared the word an acronym standing for “holding on for dear life”. In either case, the sentiment remains. The key takeaway from this post, is a useful piece of advice, “In a zero-sum game such as this, traders can only take your money if you sell.” Such is the core concept behind Hodling.

How do you HODL?

You buy low and resist the temptation to sell even as you see prices rising. In a normal crypto trading environment, people make money by buying and selling coins as their prices fluctuate. However, it’s actually this trading activity that causes fluctuations in cryptocurrency markets given that they’re largely based on the forces of supply and demand. Increased demand pushes prices upwards while significant selling pressure drives prices lower. It’s a tricky game and quite challenging for traders to time their transactions exactly right so as to maximize their profits each time. However, as a HODLER, all you need to do is hold on, and ignore all market fluctuations.

The endgame varies for different people. Some say you should HODL until your coin is worth a sum that you’re happy with. Then, you simply sell and take profits. Of course, there is always a chance that prices may continue to rise after you’ve sold and you may end up regretting your decision to not wait longer. 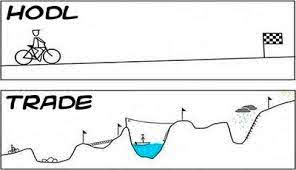 Others say HODL until your coin becomes a fully spendable currency and you won’t need to worry about having to sell it back anymore. Instead, you’ll be able to simply spend what you have as is. The risk here is that not all coins are created equal, and no one can guarantee the future of any crypto and its ability to become a full-fledged currency. This is especially true with all the new Central Bank Digital Currencies (CBDC) that many governments around the world are developing.

In the case of Bitcoin, had you purchased and HODLed your coins from the start, your profits would be unprecedented. Luckily, many believe that Bitcoin is still in its infancy and you may still be early if you buy now. The choice is yours! ← What can you buy with Bitcoin in 2021?
What Are Crypto Whales And Why Do They Matter? →
About