Launched in mid-April 2021, Horizon Token (HZN) is the Horizon Protocol’s native token that serves as collateral for the on-chain synthetic assets and derivatives market. HZN trades at $0.11 per token with a circulating supply of 40 million, for a market cap of $4.5 million. What Is Horizon Protocol?

In October 2020, APEX Network (CPX) and Red Pulse Phoenix (PHX) announced a merger to become Phoenix Global (PHB). It was a decision by both parties to combine their platform’s features to develop Horizon, a larger, more comprehensive decentralized finance (DeFi) platform.

Horizon Protocol is a new DeFi platform that focuses on the creation and trade of on-chain synthetic assets. It is forked from Synthetix (SNX), a decentralized synthetic asset issuance protocol built on the Ethereum (ETH) blockchain. Unlike Synthetix, the Horizon platform is built on the BSC. BSC offers the Horizon platform immediate solutions to scalability issues, such as slow transactions and high gas fees. The platform also uses cross-chain platforms, such as Polkadot (DOT) and Cosmos (ATOM) to improve interoperability with the BSC, Ethereum blockchain, and other blockchains.

Horizon Protocol offers various DeFi services revolved around staking HZN, the platform’s native token. HZN serves as the collateral to mint tradable synthetic assets (called zAssets on Horizon) and the reward from staking and liquidity pools. Users staking HZN will also form a decentralized autonomous organization (DAO). The DAO is responsible for network governance by managing parameters such as collateralization ratio, staking and liquidity pool rewards, and exchange fees. HZN holders will also be able to develop and vote on Horizon Improvement Proposals.

What Does Horizon Protocol Offer?

Horizon Protocol will provide a decentralized marketplace for on-chain synthetic assets and derivatives without needing traditional and centralized financial institutions acting as intermediaries. As previously mentioned, the platform relies on HZN. It encourages users to stake their tokens in a community-based liquidity pool by offering additional HZN as incentives. The HZN rewards come from both the protocol’s HZN inflation policy and the 0.3% exchange fees per transaction. The platform distributes the rewards according to users’ position sizes within the liquidity pool.

When users stake their HZN tokens, the liquidity pool will use the tokens as collateral and mint zAssets. Currently, the platform only offers zUSD, a stablecoin pegged to USD. The protocol issues zAssets at a collateralization ratio of 750%. The over-collateralization is to protect investors from the volatile cryptocurrency markets and avoid liquidation penalties. As an example, suppose a user wishes to mint 100 zUSD. The user would need to collateralize a number of HZN worth $750 to receive 100 zUSD. This collateralization ratio is adjustable and fluctuates according to the HZN price. If a user wishes to withdraw the staked HZN, the protocol will burn the corresponding value of zAssets.

The Horizon platform will also serve as an exchange where users can trade or swap assets using zAssets. The platform only mints zAssets if a user stakes HZN, which means that all zAssets are minted by the same liquidity pool. This means that zAssets are easily exchangeable since HZN tokens back all Horizon-based synthetic assets. Therefore, the Horizon platform is free from trade slippage, where the platform will not execute orders at a price worse than that at which a user placed it. The protocol also seeks to expand into margin, leverage, and options trading in the future.

The Horizon Exchange will rely on the price feeds from oracles to supply the exchange rates of zAssets. Currently, the protocol depends on external data oracle platforms such as Chainlink (LINK) and Band Protocol (BAND), and Phoenix Global’s proprietary Phoenix DeFi Oracle to determine the prices and exchange rates. The Phoenix DeFi Oracle will utilize the Phoenix Chain, originally developed by APEX Network and PHB, the utility token for node operation and price feed validation.

Who Is Behind Horizon Protocol?

Jimmy Hu and Tiger Yang co-founded APEX Technologies, the company behind APEX Network, in 2011. Forbes China listed APEX Technologies as one of the Top 50 most promising companies in 2018. Hu and Yang are both University of California, Berkeley alumni.

The project is relatively new and has only completed an initial farm offering (IFO) on PancakeSwap (CAKE) in mid-April 2021. The platform allocated 10 million HZN for the IFO with a price of $0.25 per token. The platform raised the expected $2.5 million in CAKE-BNB liquidity pool tokens.

During the IFO in mid-April 2021, HZN traded at an initial price of $0.25, which then rose to its historical peak of $1.7. However, the price soon corrected itself and dropped by almost 250% to $0.50 on April 23. After a price correction, HZN’s price increased by 100% from around $0.50 to $1, possibly fueled by the overall bullish trend for the cryptocurrency market. After that, however, the price plummeted following negative cryptocurrency headlines and has now stabilized at around $0.10. 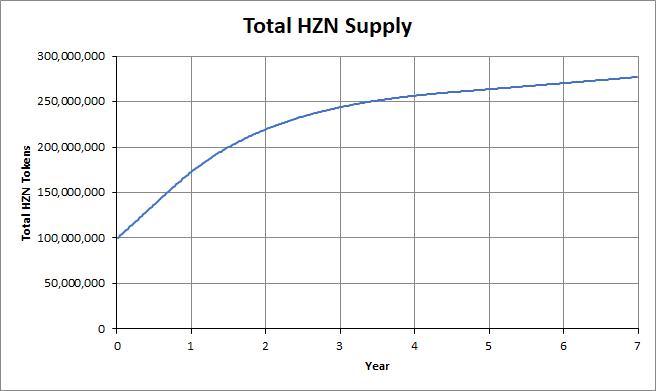 The total HZN supply over time with the implementation of the inflation policy. (Source: Horizon Protocol)

Horizon Protocol is a very new project that is still on its testnet. The team expects that the mainnet will go online in July. At the moment, only three features are available on the testnet – the staking of HZN to mint zUSD, the burning of zUSD to reclaim HZN, and staking rewards (test tokens only). On the other hand, the Horizon Exchange, governance features, and lending and borrowing services are expected to launch within the year. Progress looks good as the Horizon team has followed their roadmap closely, delivering the promised features on time in past months.

Horizon Protocol’s biggest competitor is Synthetix, one of the leading synthetic assets platforms in the DeFi space. Like Horizon, Synthetix is a platform for users to stake SNX, its native token to mint synthetic assets. The key difference between the two is that Synthetix is Ethereum-based and suffers from slow transactions and high gas fees during network congestion. In contrast, Horizon Protocol is built on BSC, an independent blockchain that allows for cheaper and faster transactions. Therefore, the Horizon platform can handle larger transaction volumes than Synthetix before coming across scalability issues. However, Horizon is still very new, and it can be difficult for the platform to go against established DeFi platforms like Synthetix.

Horizon Protocol is a new DeFi platform for the creation and trade of synthetic assets. The platform is built on the BSC, which gives faster transactions and cheaper fees. Users can stake HZN on the Horizon platform and receive synthetic assets in return. The platform also has liquidity mining and incentivizes HZN stakers to provide liquidity and collateral to the network. Moreover, HZN holders will also be able to participate in network governance and improvements by voting for protocol parameters and Horizon Improvement Proposals. The platform is currently still on its testnet, thus missing most of its features. The current challenge for the team is undoubtedly getting the protocol’s mainnet online. However, the Horizon team has followed their roadmap closely and delivered many features on time. Hopefully, the team can launch the mainnet in July 2021 as expected so interested investors can utilize the platform’s services.

← What are the Most Friendly Countries Towards Crypto?
What is OpenSea: The Peer-To-Peer NFT Marketplace →
About