Launched in 2020, Cream Finance (CREAM) is a relatively new decentralized finance (DeFi) protocol with massive potential. The CREAM acronym stands for “Crypto Rules Everything Around Me,” which signifies the project’s passionate belief in the future of cryptocurrency. CREAM trades at $176 per token with a circulating supply of 766,000 and a market cap of $134 million. 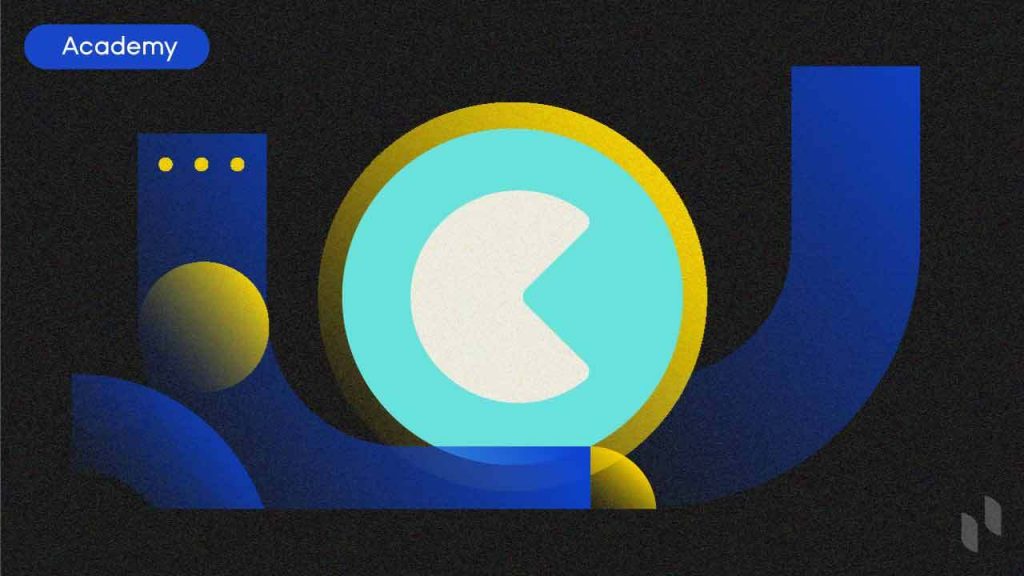 What is Cream Finance?

Cream Finance is a multi-purpose DeFi protocol that is forked from Compound Finance (COMP). Cream Finance primarily functions as a peer-to-peer cryptocurrency exchange and lending platform. This type of platform works based on liquidity mining.

Cream Finance’s token is CREAM. CREAM is an ERC-20 standard token where holders can gain certain governance and economic rights. For example, users can vote in network governance and receive a percentage of the fees (0.05% of the 0.25% fee) from token swapping in CREAM’s decentralized exchange (DEX). At launch, there was supposed to be a maximum of 9 million tokens. However, the community voted to reduce the maximum cap, and 6 million tokens were burned.

Cream Finance first launched on Ethereum (ETH) on August 3, 2020, with a mining pool named YOLO Alpha. The team released the second version of the protocol on the BSC on September 11, 2020. In March 2021, Cream Finance also went live on Fantom (FTM), which is a “fast, high-throughput open-source smart contract platform for digital assets and apps.” Users can choose to use Cream Finance by crossing the supported cryptocurrencies through Fantom or BSC.

Cream Finance didn’t stop there. In June 2021, Cream Finance announced that it would scale even further by launching on Polygon (MATIC), an Ethereum Layer 2 integration solution. In addition, it has also announced intentions to launch on Arbitrum, a true Layer 2 scalability solution created with full Ethereum Virtual Machine (EVM) compatibility. According to Cream Finance, being on these platforms will lead to “faster transaction fees, lower gas fees, and access to additional markets for users.”

How Does Cream Finance Work?

The Cream Finance protocol offers three main functions: lending and borrowing, staking and liquidity mining, and governance. These have largely been adapted from other existing protocols and then further improved upon.

The primary feature of the Cream Finance platform is the peer-to-peer lending and borrowing of cryptocurrency assets. The Cream Finance app interface is extremely similar to that of its parent, Compound Finance. 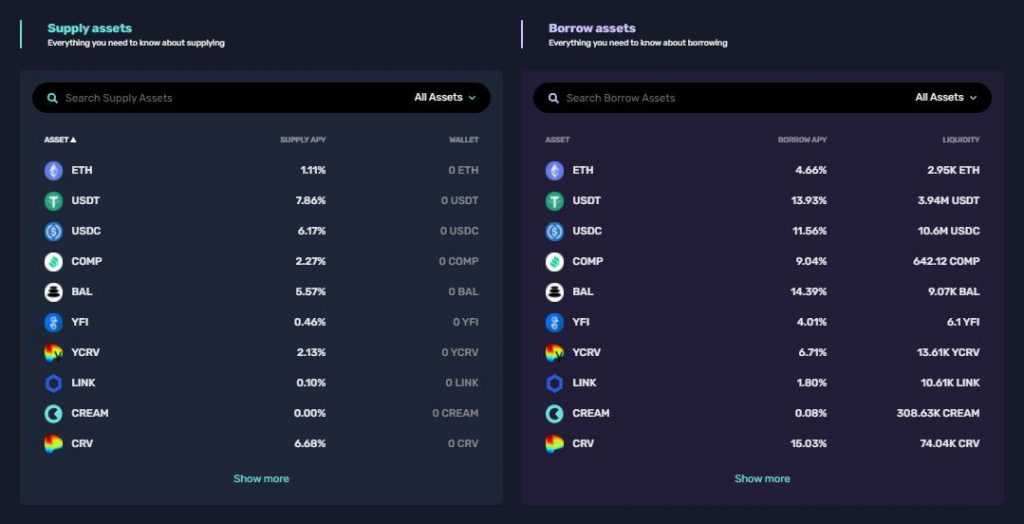 However, Cream Finance differentiates itself from Compound Finance and other DeFi protocols by supporting many cryptocurrency assets. Many of these assets are less established and are under-served by other protocols. Cream Finance thus fulfills a gap in the market for greater liquidity in these high-potential, high-risk assets.

How do you borrow from CREAM?

User needs to first deposit a certain amount of cryptocurrency into their account to borrow other crypto assets. Naturally, this needs to be greater than the amount they wish to borrow. Users can then borrow a percentage of the total value of the cryptocurrency that they deposited into the platform. The deposit acts as collateral which the protocol will liquidate if the USD value falls below a predetermined threshold. As such, borrowers need to consistently monitor the value of their cryptocurrency holdings. Cream Finance recommends keeping your borrow limit to 80% of your total wallet value as a precaution.

It is also possible to borrow a cryptocurrency that is different from the one deposited as collateral. The supply and demand for the asset determines the interest rate.

In January 2021, Cream Finance launched Cream v2, nicknamed the “Iron Bank.” The Iron Bank is Cream’s “protocol-to-protocol lending platform and liquidity backstop for the entire DeFi ecosystem.” This platform launch is a revolutionary move in the DeFi space as existing money markets, including Cream v1, were only peer-to-peer.

One major benefit of this new protocol-to-protocol lending platform is that zero collateral is needed to borrow cryptocurrency. However, this feature is only available for whitelisted protocols that the protocol deems to be more well-established. Currently, these whitelisted partners include Yearn Vaults and Alpha Homora. Moving forward, Cream Finance has stated that they would like to take things one step further and move towards DAO-to-DAO loans.

Another new feature that concerns lenders and borrowers is Cream Finance’s Boosted Savings. This feature was launched on July 29 and allowed users to earn even higher APY through automated delegation. It is comprised of lending interest and shared validator rewards. Users do not have to take additional steps to earn these rewards as the validation delegation process is done on the backend. This feature is currently only applicable to users who deposit the BNB, on the BSC. However, Cream Finance expects to expand this to other blockchains in the coming months.

Users can stake CREAM tokens on Cream Finance. The expected APY differs based on the duration of time you are willing to stake your tokens. During this period, cryptocurrency tokens are locked in and users cannot utilize them for trading or voting purposes. 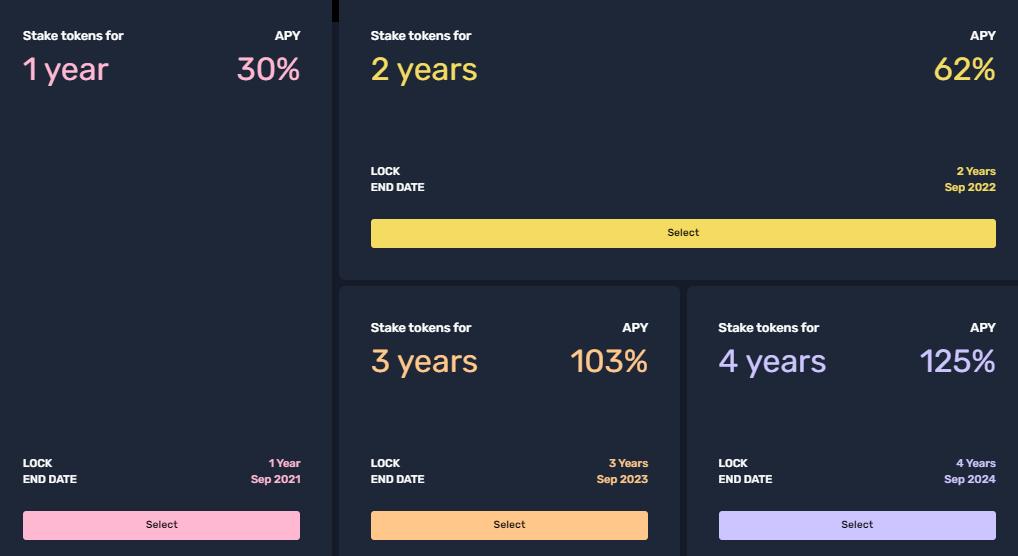 While this may be an attractive way of earning passive income, staking cryptocurrency comes with risks. In the event where the market value of CREAM plummets, investors will incur a loss. For example, if the value of the CREAM token were to dip by 50% within a year, an APY of 30% will not be sufficient to cover the losses incurred.

Cream Swap, a DEX protocol forked from Balancer (BAL) was released on September 4, 2020. The DEX is an automated market maker (AMM) that works similarly to Balancer and Uniswap (UNI). As a result, token swaps on Cream Swap happens autonomously and eliminates the need for centralized components like the order book.

How do you liquidate Cream Finance?

The protocol allows users to exchange cryptocurrencies, including those currently held as collateral positions. By providing this AMM, Cream Finance increases the liquidity of various cryptocurrency assets while operating in a decentralized manner.

Cream Finance’s Swap differentiates itself from other AMMs by charging a lower trading fee of 0.25%, lower than the average of 0.30% of other platforms. Furthermore, to encourage users to provide liquidity, Cream purportedly distributed 3000 CREAM tokens daily for CREAM trading pairs and 500 CREAM tokens for other liquidity pools.

What is the iceCREAM Token: Governance

The protocol rewards users with iceCREAM tokens in exchange for locking their CREAM tokens for a certain duration of time, ranging from one week to four years. Thus, the amount of iceCREAM distributed to the user will depend on the amount of CREAM and its staking duration.

The iceCREAM token is meant to be non-transferable and non-tradable and will be used mainly for governance purposes. One iceCREAM token will be equivalent to one vote for future Cream Finance proposals. Users can stake the tokens to earn more CREAM token rewards.

Who Is Behind Cream Finance?

Jeffrey Huang is a serial startup founder and savvy businessman from Taiwan. He is also the founder of Mithril (MITH), which is an Ethereum-based social media platform. Huang also co-founded Machi X with Leo Cheng, which is a platform for tokenized digital art.

Leo Cheng is currently the co-founder and project lead at Cream Finance. He holds a Bachelor of Arts in Economics from the University of California, Berkeley (UCB) and a Master’s in Business Administration from the University of Michigan. He has experience in business management and worked for Applied Materials, Apple, American Express, and Belkin. Cheng also co-founded Blockstate, a company offering token sale advice and blockchain technology consulting services.

The Cream Finance team launched the CREAM token in August 2020. There are two prominent peaks in its lifetime – one on September 10, 2020, and the second on February 4, 2021.

The first peak in September 2020 saw the CREAM token’s price increase by almost 300% from around $70 on August 29 to $280 on September 10. The price rise was fueled by news of the Cream Swap launch and the release of a new beta version of liquidity mining. However, the price fell to less than 10% of the price at the peak, possibly due to coordinated selling.

The second peak in February 2021 saw the CREAM token’s price reach its all-time high. CREAM’s price rose by almost 300% from $70 on January 12 to $310 on February 4. The price increase was first driven by news of the asset cap implementation. The price was then further boosted by the news of the addition of SushiSwap (SUSHI) and Uniswap liquidity pool tokens as collateral for borrowing and lending on Cream. However, the price fell to less than 35% of the price at the peak, following news of an attack resulting in the loss of funds worth $37.5 million.

Now the CREAM token’s price has been on a general uptrend with the recent recovery of the cryptocurrency market. Currently, CREAM trades at $176, which is 58% of its all-time high price. 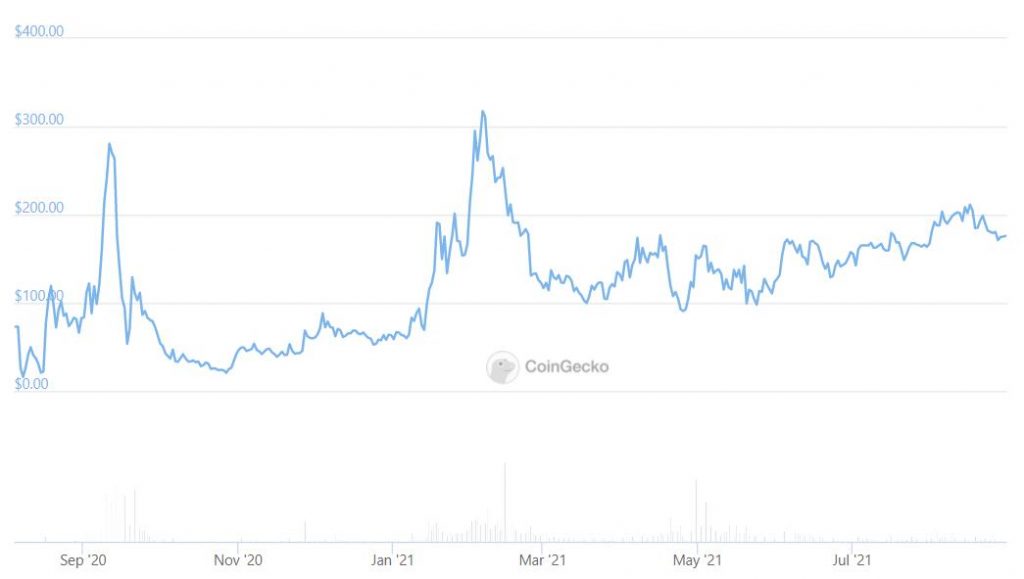 The CREAM token distribution and emission schedule are shown in the figure below. The circulating supply of the CREAM token at the time of writing is approximately 767,000 tokens, while the maximum supply for the coin will be around 2.9 million. At $176, the market cap is currently at $134 million and its fully diluted market cap is $554 million. Additionally, the total value locked is currently $1.34 billion, making the market cap to TVL ratio 0.087.

What Is the Future for Cream Finance?

Cream Finance’s competitors are similar lending protocols such as Compound and Aave (AAVE). Cream manages to set itself apart by leveraging the existing DeFi protocols in the cryptocurrency market. Cream Finance picks out what it deems as the best features of various protocols, integrates, and improves upon them. The protocol borrows source codes from Compound, Balancer, Curve Finance (CRV), Uniswap, and other projects. Throughout the process, Cream Finance has been extremely open about its changes to the protocol.

Since its initial launch, Cream Finance has been rapidly upgrading its protocol. The team communicated many of these updates through its highly active blog on an almost weekly basis. The activeness of the Cream Finance team in detailing their progress gives confidence to outsiders that the team won’t abandon the project.

There has been a huge buzz in the DeFi space

For any inquiries contact us at support@phemex.zendesk.com .
Follow our official Twitter account to stay updated on the latest news.
Join our community on Telegram to interact with us and other Phemex traders.
Phemex | Break Through, Break Free
surrounding Cream Finance, and for a good reason. The decentralized platform has scaled rapidly since its initial launch and introduced numerous new features that may lead to breakthroughs in the DeFi market. It also makes its platform highly accessible through its appealing user interface and constant communications of any updates on its blog. However, as with any DeFi protocol, it comes with its set of risks.

← What is Clover Finance: A Blockchain Infrastructure Platform
What is Celer Network: Off-chain Scaling Platform →
About