What Are Ronin and Katana DEX: Supporting Axie Infinity’s Ecosystem

Katana, also known as Ronin Dex, is a recently launched decentralized exchange (DEX) on its own Ethereum sidechain, Ronin. Ronin is a blockchain based on the Ethereum Virtual Machine (EVM), and was created by Sky Mavis to support the popular play-to-earn game Axie Infinity. Ronin’s cryptocurrency, the RON token, currently trades at $2.11 per token, with a circulating supply of 148 million for a market cap of $312 million. 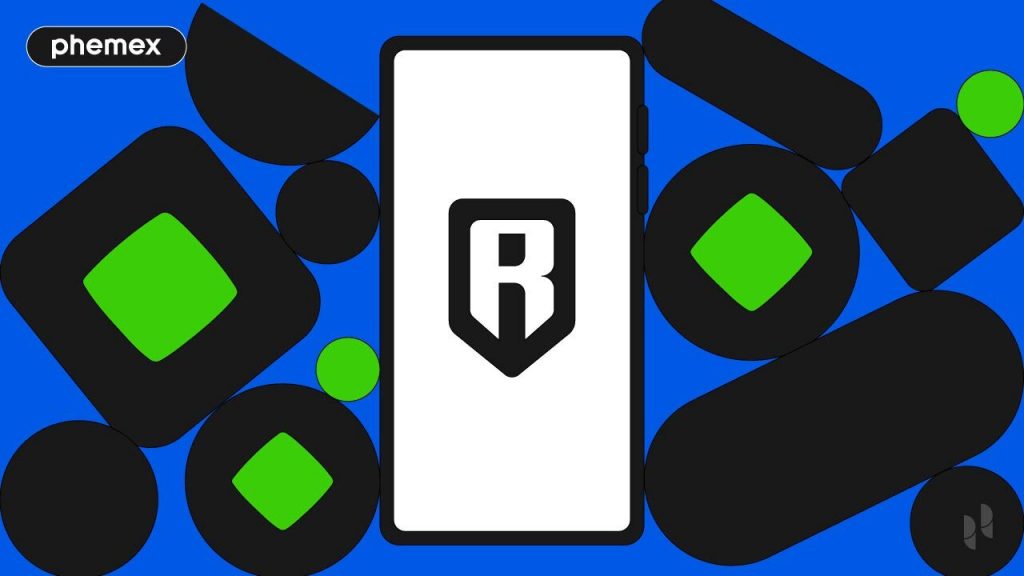 What Are Katana and Ronin?

As the largest exchange for the ecosystem’s tokens, Katana’s vision is to foster a user-friendly environment that maintains low costs for members of the Axie Infinity digital nation without relying on third-party exchanges. As an automated market maker (AMM), Katana is always available for the immediate buying and selling of tokens. This makes it an efficient exchange service and makes it easier and cheaper to use of the ecosystem’s products, like Axie.

How Does the Ronin Chain Ecosystem Work?

The aim of Ronin is to allow the large volume of microtransactions to occur with affordable fees, and near-instant transaction times. The Ronin ecosystem is made up of the following parts:

What is Ronin Wallet?

Ronin wallet is a crypto wallet which operates on the Ronin blockchain. It was developed as the official sidechain wallet for Axie Infinity, but is also compatible with other NFT games on the Ronin blockchain such as Gunship Battle, a war strategy game.  Ronin wallet can be used to send and receive crypto and NFTs whilst maintaining low transaction fees. Each user will receive a certain amount of free transactions per day, calculated against the assets they own. Users can receive anything from 3 transactions (owners of 1x Normal Axie) to 350 transactions (owners of 1x Mystic Land), for free on a daily basis. 20 free transactions are also rewarded to any marketplace account upon activation, when linked with a Ronin wallet.

What is Ronin Bridge?

The Ronin bridge is a gateway that allows Axie Infinity players to transfer their ERC-20 tokens onto the Ronin network, and vice versa. The bridging process is necessary for the transfer, since Ronin is a sidechain. The Ronin bridge is easy to use, and each transaction takes around 10-15 minutes only.

What is Ronin Block Explorer?

Ronin Block Explorer is an analytics platform developed for Ronin. The online blockchain browser, built by Sky Mavis, shows the details of all transactions that have ever occurred on the blockchain network. The use of the Ronin Explorer brings transparency to the network and provides data accessibility for users.

It’s possible to stake AXS tokens in order to receive AXS returns as a reward. When staking AXS, the tokens are locked up through the staking dashboard. While they remain untouched, the rewards accrue over time to allow users to earn more AXS for their input. Staking AXS also offers the users voting rights, and an influence upon the decisions that occur within the Community Treasury. 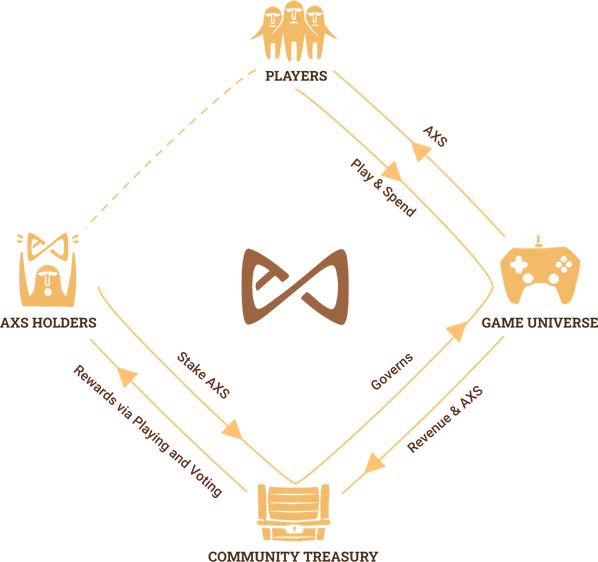 How Does Ronin Work Together with Axie Infinity?

Axie Infinity is a play-to-earn (P2E) NFT-based game where players earn tokens through collecting, breeding, raising, battling, and building kingdoms for virtual pets called Axies. Ronin was built to create a faster, more reliable network which could cater to the gaming needs of Axie Infinity. In order to play the game, users are required to purchase three “starter Axies” using the Ethereum network cryptocurrency, Ether (ETH). Players can then use the Ronin wallet to manage their assets (AXS tokens, Axie NFTs etc.), and transfer them between the Ronin and Ethereum network. Each Axie is designed as its own non-fungible token (NFT), therefore holding unique value within the ecosystem.

Axie Infinity can also be used to make real-world income by selling Axies for AXS tokens, or finding the tokens within the game. The tokens are able to be transferred into a fiat currency of the user’s choice.

How Does Katana Work?

Any user with a Ronin wallet can take advantage of the swap feature.

How to Farm RON Token?

However, in order to farm RON, a user must already have liquidity provider (LP) tokens in their wallet. The components of this process are as follows: 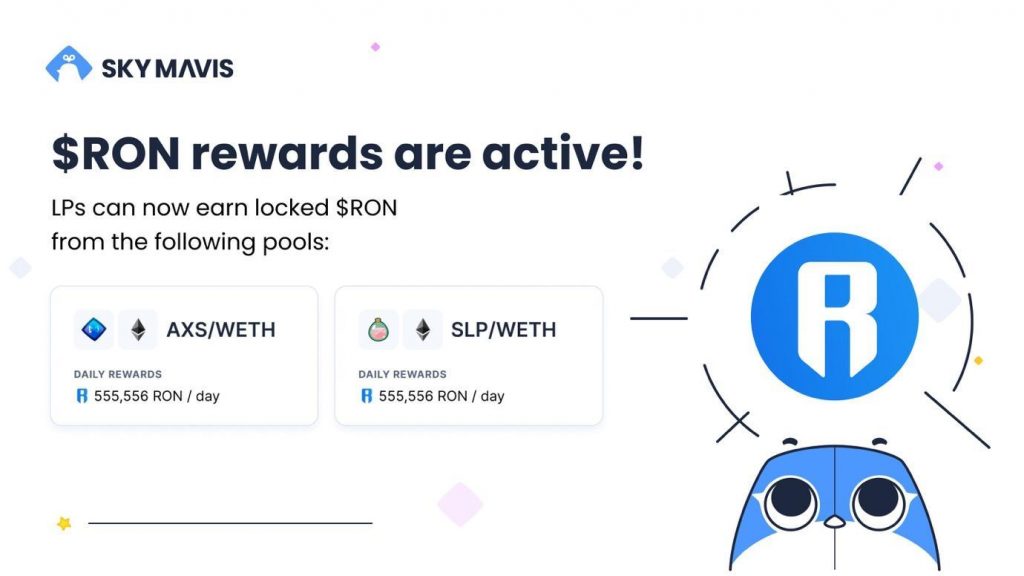 Who Is Behind Katana DEX?

The Katana Dex was created by Sky Mavis, a technology and games development company that focuses on decentralized applications and services. Sky Mavis was also the creator of the popular game behind the Ronin sidechain and Katana Dex, Axie Infinity. The company was founded fairly recently in 2019, and is headquartered in Ho Chi Minh City, Vietnam.

The CEO of Sky Mavis is Trung Nguyen. Nguyen is a former software engineer and a co-founder of Lozi, an e-commerce platform offering 1-hour delivery in Vietnam. He is represented on CoinDesk’s Most Influential 2021 list.

What Can Be Traded on Katana?

A few different assets can be traded within the ecosystem of Axie Infinity, each with a unique purpose in supporting both the game and the community:

RON is the native currency of the Ronin blockchain, and is intended to eventually power all transactions that occur within the ecosystem. The token was launched alongside Katana and is planned to be used to pay gas fees and secure the network for Axie Infinity, as well as any future games and products hosted on the chain.

The RON token’s primary purpose is to ensure that the Ronin community will always hold ownership of Ronin. RON tokens have been launched through liquidity pools on Katana, as previously mentioned.

At its launch alongside Katana in late January 2022, the RON price went up to $3.74 before falling with the Bitcoin (BTC) trend over the course of the month. The token eventually reached a low of $1.90 at the start of February 2022.

Throughout February, RON token’s price hovered around $2, reaching an all-time low of $1.80 towards the end of the month before levelling out at its current value of $2.11. Since the coin was just released roughly one month ago, there’s not enough historical data to inform an accurate prediction for its future. 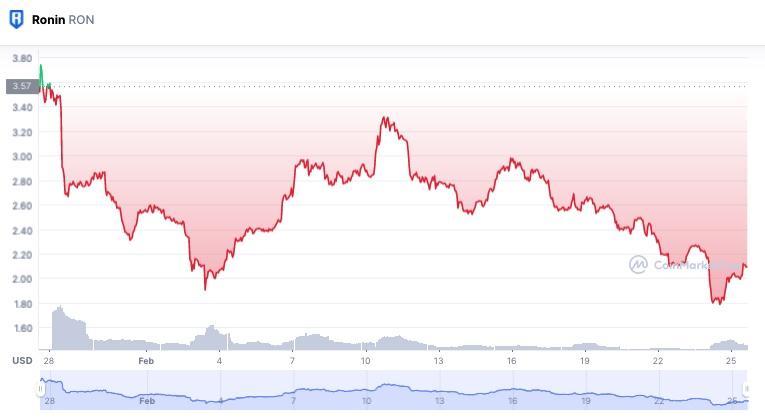 What Is the Future of Ronin?

Since the time RON was launched, some aspects of the blockchain have been adjusted. Prior to the launch, users were offered the advantage of 100 free transactions per day, but moving forward, gas fees will be paid in RON. However, Sky Mavis has generally held onto its low fee vision by offering gas fee discounts for NFT holders and one-off advantages to first-time users.

Along with Katana and RON, Sky Mavis announced an application called Scatter. Scatter can be used to send RON to multiple wallets at the same time to help with ease of distribution regarding certain aspects of Axie Infinity. This is another feature that’s intended to provide a user-friendly model to the community.

Generally, the Ronin community tends to focus on freedom, rights and collaboration within the industry, and puts out a positive message for the future. Ronin hopes to co-create with NFT game developers in the future in order to form a broad-based gaming ecosystem that shares assets and concepts across many communities. With a builder incentive program coming up and with frequent updates for the game itself, the community offers plenty of events to look forward to.