Launched in November 2020, Amp (AMP, previously known as Flexacoin) is an ERC-20 collateral token that facilitates instant and verifiable assurances for value transfers and real-world applications. AMP trades at $0.042 with a capped supply of around 99 billion tokens for a currently circulating market cap of $2.6 billion. 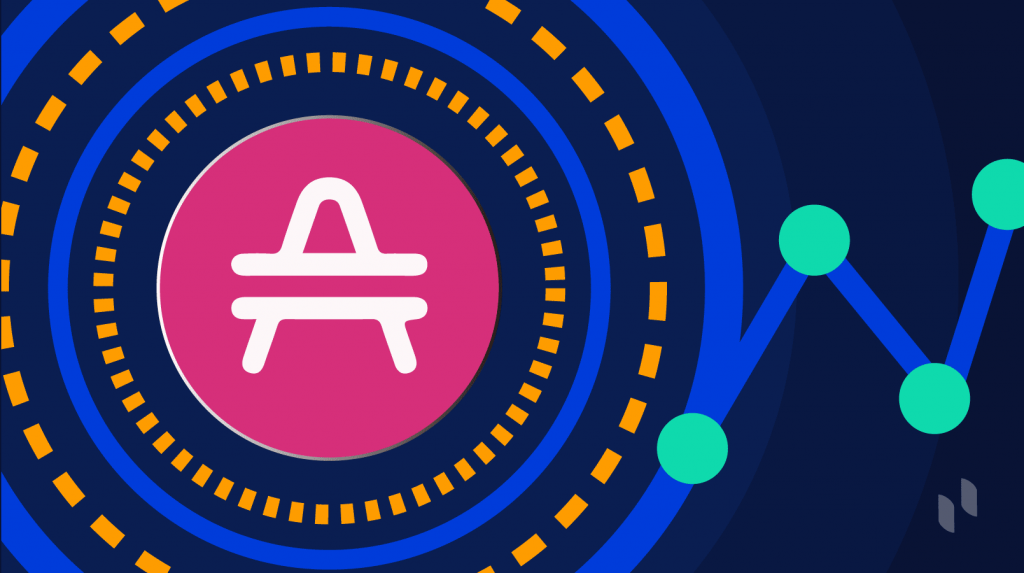 How does AMP solve Problems with Traditional Payments

Digital transactions have long been used in global commerce. However, popular payment systems such as Visa and Mastercard come with high costs for merchants, who must deal with transaction costs, chargebacks, and card fraud.

After a card is swiped, the transaction may appear to be simple and instant. In reality, a complex back-end system is processing up to ten steps (see diagram below). This leads to greater processing costs, and in turn, higher fees. By accepting traditional card payments, merchants sacrifice roughly 3-4% of each transaction to fees.

Card fraud and chargebacks also result in unexpected expenses. In 2020, card fraud accounted for $32 billion of losses, while card chargebacks cost merchants 1.94% of all transactions. These costs are especially severe for small businesses that don’t have systems in place to detect fraud or security breaches. 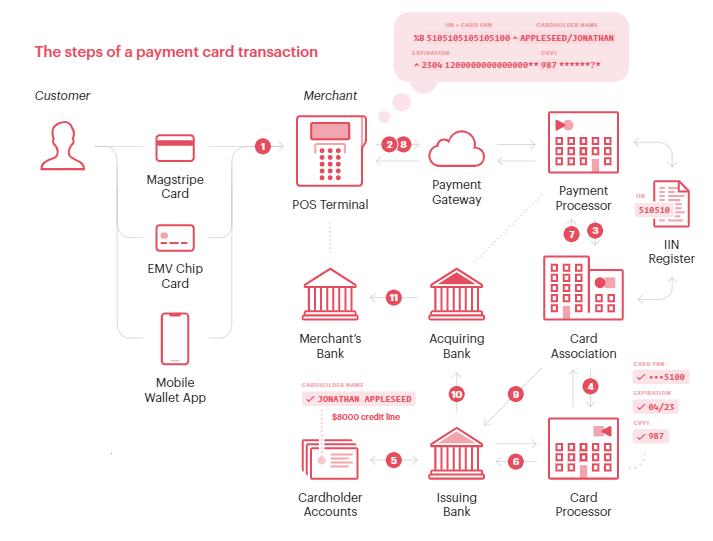 The majority of transactions today occur on a payment system that was created in 1979. Back-end payment processing has changed little from then to now.

Considering the hassles involved in these transactions, why don’t we abandon fiat and just use crypto? Well, new problems could arise. Bitcoin’s current average transaction time of 10 minutes per transaction is impractical for merchants. Price volatility means that a transaction’s value could change significantly within this long transaction time frame. Ethereum currently also faces issues with scaling and high gas fees, so it’s just as impractical — at least for now.

Crypto cards are also built on top of the same 1970s legacy systems; most use Visa or Mastercard systems. This creates the potential for centralized organizations and banks to block card payments, or in extreme cases even confiscate a user’s money.

That’s where AMP comes in. AMP is a digital token that can be used as collateral for any type of value transfer. The Flexa Network uses AMP to make quick, irreversible and secure payments for a wide variety of currencies and assets.

How Does Amp Work?

Amp’s use case is unique because it can be used as collateral for any digital or physical product. This is also where it differs from Bitcoin’s Lightning Network as a payment solution. Amp can collateralize any digital asset, whereas the Lightning Network mainly serves to solve scalability issues for Bitcoin. When used with Flexa, Amp is particularly efficient at solving issues plaguing most merchants. Flexa claims to be the “fastest, most fraud-proof payment network in the world” and is made of three components:

Let’s say a consumer wants to purchase a scarf from Nordstrom using Dogecoin (DOGE). The process would be as follows:

Using Amp, the Flexa Network theoretically abstracts away the finality risk from merchant transactions using a decentralized collateral mechanism. The issuing and staking of Amp tokens crowdsources the collateral needed for instant value transfers. Amp stakers are rewarded with more AMP tokens for every payment transaction that successfully passes through the network. However, if a payment transaction fails, the Flexa Network liquidates the locked AMP and spreads the cost across all stakers. Currently, AMP holders can stake on Flexa Capacity. The greater the number of stakers, the more secure the network becomes.

What are the Benefits of Amp and the Flexa Network for each transaction party? 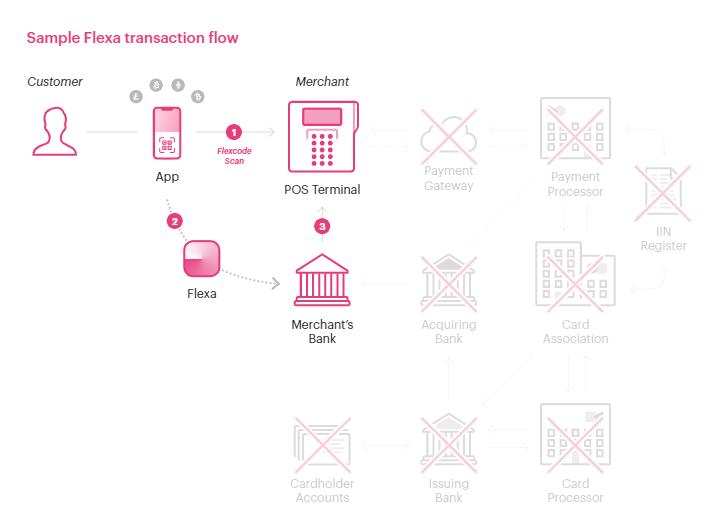 A transaction made through the Flexa Network cuts out many previously needed steps, resulting in cheaper fees. (Source: Flexa Whitepaper)

The value of AMP is heavily tied to its utilization. In order for AMP to have value, it must continue to be used as collateral to facilitate payments. Therefore, AMP’s future prospects may depend on the Flexa Network’s ability to increase merchant adoption.

Currently the AMP market is heavily concentrated to only a handful of whales, which may raise concerns about price stability and true decentralization.

AMP has recently been integrated into several well-known decentralized finance (DeFi) systems, including Cream Finance, Alpha Homora, Pickle, SushiSwap, and the Yearn ecosystem. This inclusion is another factor that should help decrease volatility and grow AMP as a universal collateral.

Who Is Behind the Amp/Flexa Network?

Based in New York, the Flexa team was co-founded by Tyler Spalding, Trevor Filter, Zachary Kilgore, and Daniel McCabe. These four have years of experience with consumer payment products and in creating ecosystems for cryptocurrencies and digital assets.

Since 2011, Spalding has founded and invested in various blockchain projects. He was the former CTO at Raise, the world’s largest gift card marketplace with over $1 billion USD in sales and $150 million USD in venture funding. Spalding also founded and sold three software companies, and has invested in over 25 startups. He holds around 50 technology patents.

Filter began his career at the MIT Media Lab. He was previously a co-founder at Slide Network, the head of product & design at Raise, and senior product manager at American Express.

Kilgore is an expert in front-end and back-end software platforms and infrastructures for payments and mobile. He previously worked at Slide Network as the director of software engineering, and at Raise as an engineering manager. 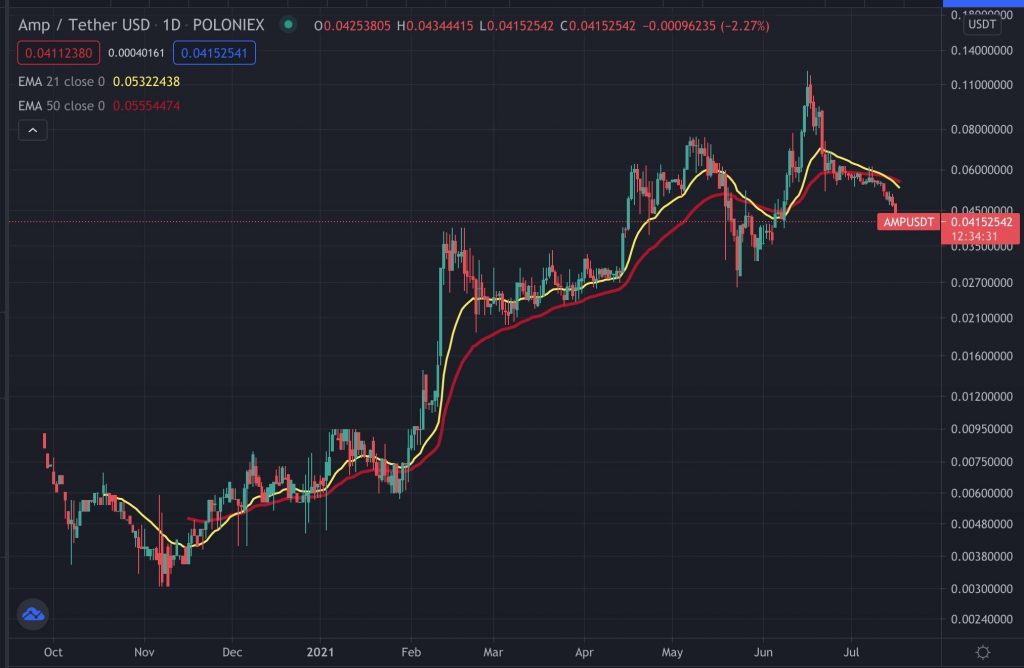 AMP has risen steadily since its inception in September 2020. From Oct 2020 to Jul 2021, the AMP token’s value grew by an astounding 900%, compared to a 210% rise in BTC during the same time frame. AMP is currently trading at $0.042, which is 65% below its all-time high of roughly $0.10. The current price may be a reflection of the crypto market’s general bearish trend. 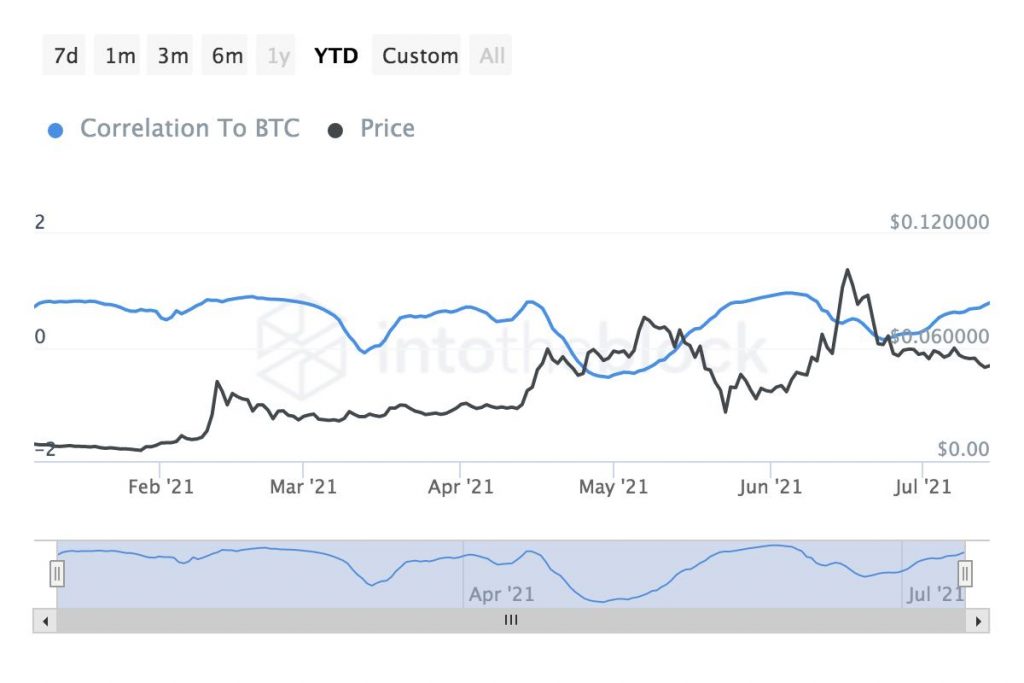 AMP’s rise over the past year can likely be attributed to its tokenomics, growing adoption among merchants, and the 2020 bull market. When new projects adopt AMP, all existing holders, stakers and merchants benefit from increased liquidity. AMP’s fixed supply and non-inflationary nature may lead to long-term appreciation.

AMP is currently ranked #40 in market cap amongst all cryptocurrencies and has a circulating supply of roughly 48 billion.

What Is the Future for AMP?

One slightly worrying aspect is that 81% of AMP is held by six “whales,” as shown in the chart below. Investors hold another 10.6% and retailers hold only 7.54%. This raises questions of whether the token is truly decentralized and secure. Amp has addressed this question in the FAQ section on its website. 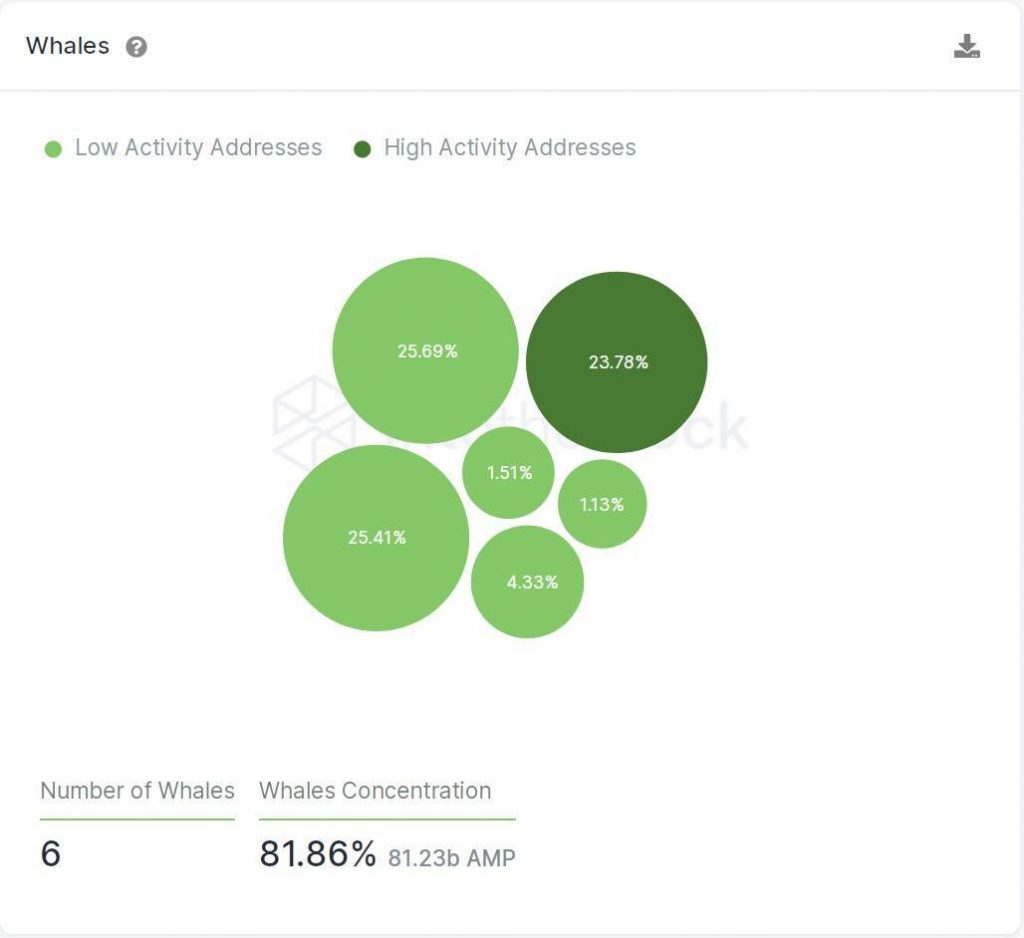 Traders who hold less than 30 days make up around 60% of all transactions. Trading activity and long-term liquidity pool holders likely contribute to price stability.

In the U.S. and Canada, Flexa is already used in over 41 thousand store locations, including at Nordstrom, GameStop, Lowe’s, and Petco. During the COVID-19 pandemic, the network released a Shopify plugin for online sales and set merchant fees to 0%, which led to increased merchant adoption.

AMP is “asset agnostic,” meaning it can be used as collateral not only for crypto exchanges, but also for fiat exchanges, loan distributions, and even property sales.

Although AMP/Flexa is a relatively new project that is headed by an experienced team and benefits from a large network of advisors. In its first year, Flexa’s SPEDN app lowered transaction costs for merchants while eliminating losses from fraud.

One major issue that could affect AMP’s decentralization, price, and network security is the nearly 82% whale concentration. Nevertheless, there is strong potential for future use cases. As the ecosystem grows, more merchant stores may sign on to use the network, which will potentially cause AMP’s value to rise in the long term.