As the cryptocurrency coin market matures, a plethora of alternatives are rising up to compete with Bitcoin (BTC) and Ethereum (ETH). One key distinction to be aware of is the one between public and privacy coins. 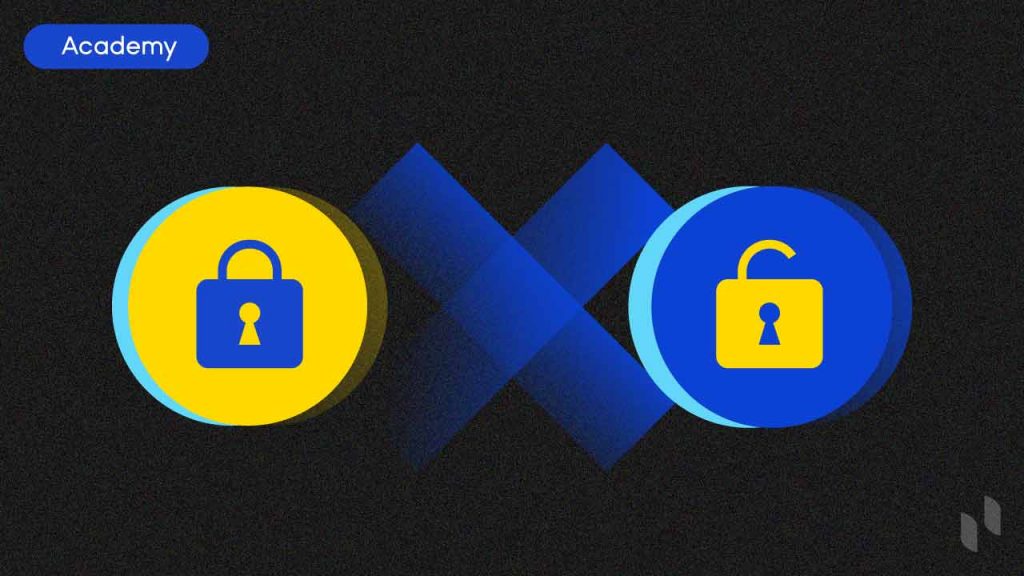 What are Public Coins?

Cryptocurrency such as Bitcoin allow users to obscure their real identities through pseudonyms (i.e. wallet addresses). This feature has caused many to believe that coins offer much better privacy than fiat currencies.

However, pseudonymity does not equate to total anonymity and privacy. A key characteristic of traditional cryptocurrencies such as Bitcoin is that transactions are transparently recorded on a public ledger. If a hacker is ever able to link a user’s wallet address to his or her real-life identity, the hacker will be able to know the entirety of that user’s past transactions.

Why is Bitcoin a Public Coin?

Bitcoin is a public coin because it does not completely hide a user’s identity. Some popular examples of public coins include Bitcoin (BTC), Ethereum (ETH), Litecoin (LTC), and Ripple (XRP). While they lack total privacy, public coins may have a variety of attractive features such as transaction speed, ease of use, mass demand, and versatile application.

On the other hand, privacy is a big selling point for some users. There has been a rising preference for “virgin” (freshly mined) Bitcoin and other cryptocurrencies because investors fear that circulated Bitcoin may be tainted by past criminal transactions.

Privacy coins are cryptocurrency designed to obscure a user’s identity and a coin’s past transactions. This eliminates any traceability back to a particular individual and no transactions will be rejected due to a coin’s past history.

Privacy coins use multiple mechanisms to obscure information. The most commonly used ones are stealth addresses, ring signatures and ring confidential transactions, and CoinJoins.

What are Stealth Addresses?

Stealth addresses are mainly used by the privacy coin Monero (XMR). This mechanism protects a transaction recipient by allowing them to gain the asset without it being associated with their digital wallet.

Every Monero wallet user has a public view key, public spend key, and private spend key. A one-time public key, also known as stealth address, is generated during each transaction. This stealth address is encrypted into the blockchain and viewable by the public. It does not contain any transaction information. Only the sender and recipient involved in the transaction will be able to access the information using their keys.

To illustrate this more clearly, let’s use a hypothetical example of a transaction between Anne and Ben.

If Anne wants to send 20 XMR to Ben, all she has to do is to enter the destination address, amount, and press “send.” It’s a quick and easy process similar to other cryptocurrencies.

However, what happens behind the scenes? Anne’s (sender) wallet will generate a one-time public key based on Ben’s public view key, public spend key, and other data.

The output is created in such a way that only Ben’s wallet is able to detect and retrieve the data from the blockchain using his private view key. Once this is done, a one-time private key that corresponds with the one-time public key will be calculated. He can then proceed to spend the Monero as he wishes using his private spend key.

The entire process happens without the XMR ever being directly associated with Ben’s wallet. In this way, stealth addresses shield Monero recipients from the public eye.

Meanwhile, other mechanisms work to privatize the sender’s information. One such mechanism is the ring signature.

What are Ring Signatures and Ring Confidential Transactions (Ring CTs)?

A ring signature is a type of digital signature that obstructs the original sender because it can be endorsed by a group of people.

Monero also uses ring signatures. The network automatically selects a group of transaction signers, known as “the ring”, who create a single transaction using the genuine output from the actual transaction, as well as a mix of previous transaction outputs. From outside the ring, there is no way of telling which is the real transaction. The other ring members hence serve as decoys to keep the sender hidden. This works especially well with larger ring signature groups. The highest recorded number of ring members thus far is 100. 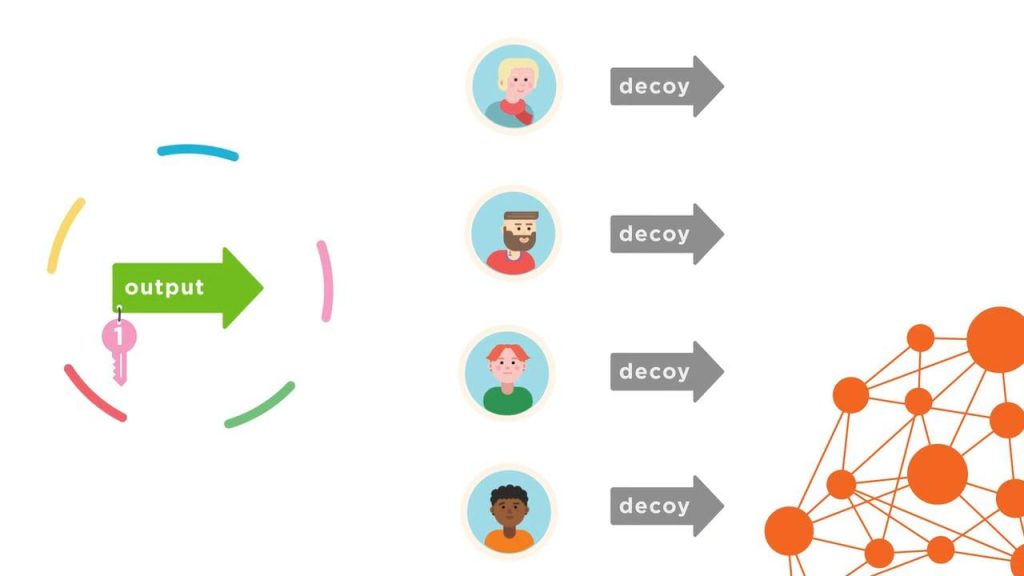 In the past, Monero was required to split into specific denominations. For example, a transfer of 12.5 XMR would be broken up into three denominations of 10 XMR, 2 XMR, and 0.5 XMR. Ring members would then be selected if they had transaction values equal to these denominations. Breaking up the transaction amount in this way ensured that senders were easily able to find ring members because ring signatures could only group transactions of the same value.

However, this meant that the total transaction amount was a piece of public information that anyone could see. To address this problem, ring confidential transactions, or Ring CTs, were developed by Monero in January 2017. This is a special type of ring signature that creates further privacy for both the sender and recipient by obscuring the amount sent in a transaction. As of September 2017, Ring CTs have been made compulsory for all transactions on Monero.

With Ring CTs, outputs with masked amounts are generated and the digital wallet is free to pick ring members with any transaction value. Transacted amounts are no longer communicated to the public.

The sender is required to commit to the amount of an output, which involves revealing just enough information for miners in the network to confirm validity without publicly revealing the amount. This is called a Pedersen commitment. The concept of proving the truth of a statement without revealing anything beyond the fact that it is true, is called a zero-knowledge succinct non-interactive argument of knowledge, or Zk-SNARK.

Additionally, range proofs are used to cryptographically verify that the amount in a transaction is greater than 0 and less than any given arbitrary number. This prevents senders from committing a negative transaction value.

Through these mechanisms, Monero transactions can be securely and privately sent and received.

Apart from Monero, some other privacy coins include Dash (previously known as Dark Wallet), ZCash, and Beam.

Beam is a privacy coin that entered the cryptocurrency market in 2019. It is powered by a novel blockchain protocol called Mimblewimble. It also utilizes CoinJoin and other mechanisms to privatize transaction information.

Some Public Coins are trying to Increase Privacy Measures 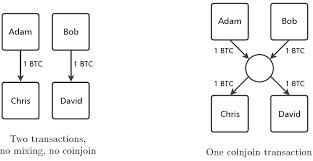 However, the security of CoinJoin tools is still uncertain. As such, Bitcoin continues to lag behind in terms of privacy when compared to specialized privacy coins such as Monero.

Privacy coins such as Monero, Dash, ZCash and Beam come with great features that protect senders and recipients from being traced to their transactions. Such features may be important to those who value privacy, do not want to reveal transaction history, or engage in illegal transactions. Some traders may also invest in these coins due to their rising popularity and smart technology.

However, privacy coins are not infallible to data attacks. There will always be loopholes that can be exploited. Furthermore, privacy coins face even greater risk than public cryptocurrencies in terms of regulatory action. The Financial Action Task Force (FATF) is clamping down on such privacy coins for potentially breaking anti-money laundering (AML) regulations. Some countries like South Korea have banned the use of privacy coins. Researching the regulations in your jurisdiction can help you stay on the right side of the law while benefiting from the latest blockchain technology.