What is PlayDapp (PLA): The Future Blockchain-Powered Gaming Entertainment Ecosystem

Launched in 2017, PlayDapp (PLA) is currently a DApp maker with the ultimate goal of becoming a blockchain-powered entertainment ecosystem builder. The PLA token trades at over $0.81 per token with a circulating supply of more than 362 million tokens, resulting in a total market cap of over $293 million. 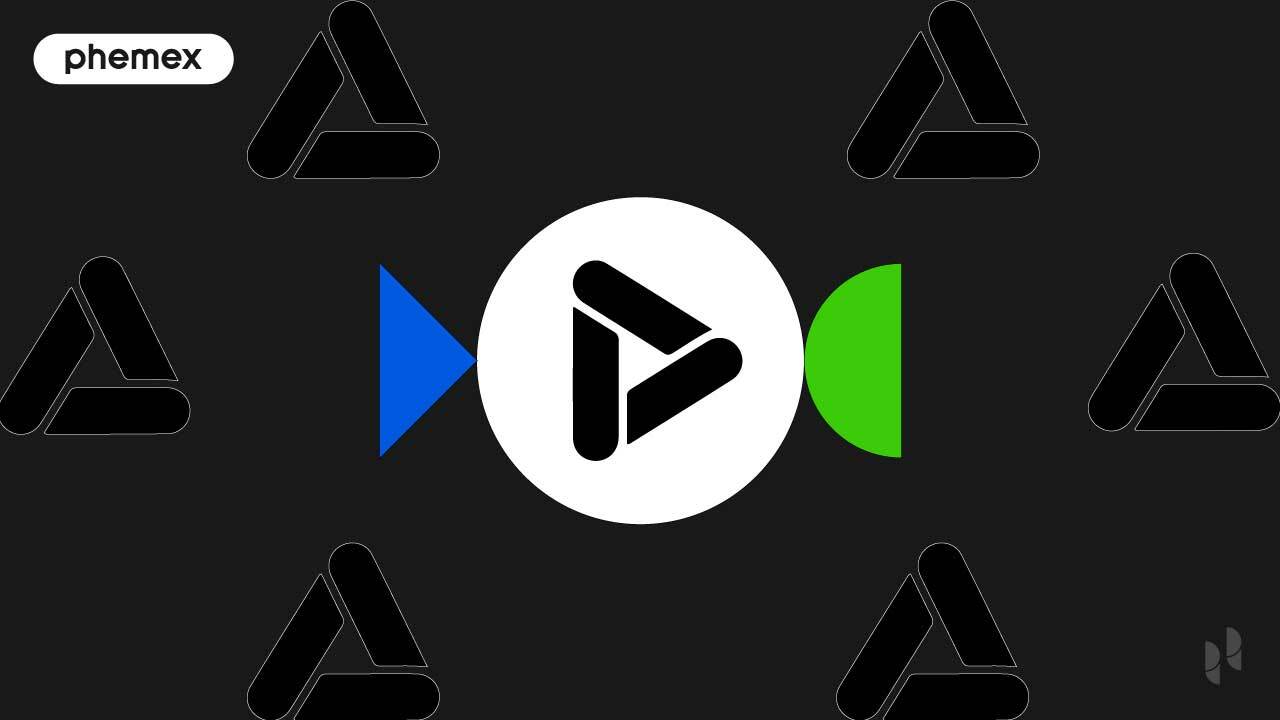 Envisioning creating a world where digital assets are more valuable and accessible to everyone, PlayDapp is a DApp game portal that provides a customer-to-customer (C2C) marketplace. All games on the portal are interoperable in which they work across multiple chains like Ethereum (ETH), Avalanche (AVAX), and Solana (SOL). Gamers can trade their characters and items in the marketplace along with increasing the value of the NFT by leveling up, strengthening, and amalgamating them.

How Does PlayDapp Work?

PlayDapp SDK is a developers’ tool that helps game developers participate in the blockchain-based PlayDapp service ecosystem more easily. It assists the game developers and companies who face difficulty building blockchain infrastructure in connecting their assets or digital items with uncomplicated system integration. Once itemized as a blockchain-based NFT, the digital asset can be interoperated between various games on the PlayDapp ecosystem. This creates synergy between games as well as facilitates user acquisition via cross-promotion. For instance, the value of an NFT can lift by increasing the usage of the game items.

Interoperable NFTs act as a factor that expands the game services, especially when blockchain technology is being introduced into the existing gaming industry. Regardless of how exciting and fun a game is, there’s a Product Life Cycle (PLC) for it. When a user wishes to play a new game, an interoperable NFT, which utilizes PlayDapp’s own IP, is able to become a reward for previous gameplay and a natural cross-promotion of new games. In addition, it helps minimize marketing costs incurred during users’ recruitment and strengthens the PlayDapp ecosystem further by offering more diverse benefits for users.

The essence of the Play-to-Earn (P2E) structure is the significant re-investment of the game’s revenue into user activities. Also, core game items earned by gamers are exchanged directly via a peer-to-peer (P2P)/C2C market or indirectly for game tokens. Users can exchange these game tokens for other cryptos on decentralized exchanges (DEX) or centralized exchanges (CEX). Under this new item acquisition method, platform and game developers are able to generate revenue via transaction fees incurred during each sale.

PLA Crypto and Its Allocation

PLA, the native token of PlayDapp, is a core utility token using the ERC-20 standard. It acts as the primary fungible token for processing transactions from users. Game Dapp operators or developers obtain PLA tokens after each in-game purchase or trade. PlayDapp charges a small processing fee for every transaction. PLA has a total token supply of 700 million, and its token allocation is as follows:

Who Is Behind PlayDapp?

The PlayDapp team consists of 70 veteran developers, operators, marketers, and designers, with the leaders having many years of experience in the PC online and mobile gaming industry. Sang Chung is currently the head of business of the company. Previously, he worked in NCSOFT, a world-leading gaming publisher, and led a team responsible for overseas third-party business development. Also, when he was at the Korea Creative Content Agency, he was responsible for all the international cooperation and business development support for the gaming sector as well as international game shows.

Donny is the company’s head of development. Prior to joining PlayDapp, he has garnered experience through various projects in the IT industry for about 20 years. He developed user-centered services and conducted several global projects at SK communication, Naver, and Samsung Electronics. Kai is PlayDapp’s head of tournament and also a veteran in the Korean gaming industry. Before that, he was a professional game server programmer at large corporations, such as NHN and NETMARBLE. He was also an expert in gaming platform development.

In February 2022, Playdapp did a strategic investment in KlayCity, a LandFi metaverse/metaverse real estate project. With this strategic investment, Playdapp plans to promote cooperation in all directions in the metaverse and blockchain business, with an emphasis on the metaverse land and PlayDapp NFT marketplace that utilize NFT together with KlayCity. In March, KlayCity succeeded in raising $3.75 million in the seed and private round funding led by Krust and Animoca Brands, with participation from Naver Z, A&T Capital, ROK Capital, Kucoin Ventures, and so on.

From an initial price of over $0.17 on October 20, 2020, PLA entered a sideways trend of about half a year, with prices consistently below $0.2. On February 17, 2021, it hit its first high of $0.73, possibly due to the launch of CryptoDozer, the platform’s first game in Japan, partnering with LINE Blockchain. CryptoDozer is a casual collection game with classic coin-push gameplay and candy-inspired design. Players can collect over 30 dolls and then combine them to create NFT DozerDolls which can alter the gameplay. CryptoDozer topped in multiple sites’ Ethereum DApp game category before. 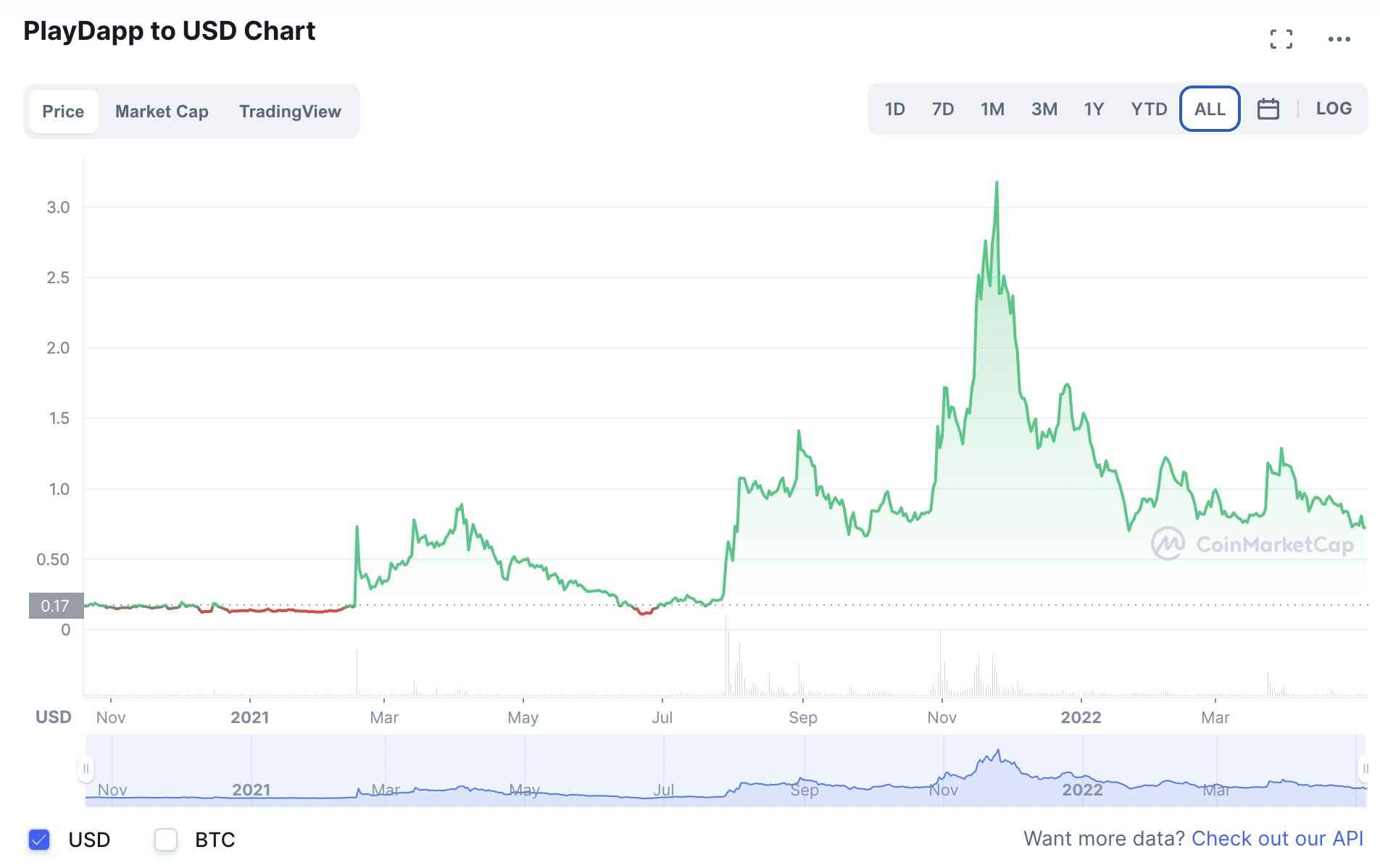 PLA stayed in a bullish trend and reached several highs in the following months. This might be attributed to PlayDapp’s announcement of its roadmap to go into NFT and metaverse convergence technology. Also, PlayDapp said that it planned to introduce the metaverse game PlayDapp Town in the first half of 2021. PlayDapp Town is a casual genre game optimized for the metaverse gaming platform “Roblox,” which at the time had 400 million users worldwide. On April 15, PlayDapp signed a contract with Haechi Labs, a South Korean blockchain firm, to support Bitcoin (BTC) payments across the portal.

After a temporary bearish trend since April, PLA regained momentum and started spiking high again in August. On July 8, PlayDapp launched its second game on Google Play Store Japan, the DozerBird for LINE Blockchain. DozerBird is a casual game where players avoid obstacles in the game with simple touch controls, at the same time trying to fly as far as possible for their personal new record. It was first launched on the Ethereum Network in 2019 and topped in the Ethereum Dapp games category sales with its counterpart, CryptoDozer.

Together with other positive news, such as the launch of PlayDapp’s flagship P2E RPG “Along with the Gods: Knights of the Dawn” in 170 countries, the new NFT auction feature on the PlayDapp marketplace, and the secondary trading of South Korea’s luxury fashion district “Cheongdam,” PLA skyrocketed to its all-time high of $3.68 on October 31, 2021.

At the time of writing, PLA trades at over $0.81 per token with a circulating supply of more than 362 million tokens, resulting in a total market cap of over $293 million. PLA currently ranks #158 on the cryptocurrency market capitalization leaderboard of CoinMarketCap.

How To Buy PLA Crypto?

Let’s use Phemex platform for this demonstration, the platform offers both spot and contract trading for investors to choose from. However, for beginning crypto buyers, spot trading is recommended. To buy PLA on Phemex, follow the instructions below.

What Is The Future of PlayDapp?

The global blockchain market is expected to rapidly grow to $23.3 billion by 2023, yet a real problem remains, which is low user engagement. The industry desperately needs a successful mass-adoption use case to justify its sustainability and that its token models are economically healthy in the long run.

Many experts believe gaming DApps to be the catalyst for blockchain mass adoption. This is because games have led to many technological paradigm shifts before, such as AngryBirds leading the mobile app market surge and PokemonGo becoming the best case of AR technology adoption. Gamers are the early adopters of digital assets, including fungible tokens, and solid and autonomous communities of gamers emerged a long time ago. These match the core philosophy of blockchain innovations, which are tokens and autonomous governance.

According to several DApp ranks, games are the second most active category in terms of the number of transactions and active users, just behind decentralized exchanges. Thus, PlayDapp has great potential in the future.

Yet, PlayDapp’s market cap is still relatively small at the moment of writing. KRAFTON’s recent joint effort with the Solana blockchain may add more sheen to blockchain-powered games. KRAFTON is a South Korean leading video gaming company. Also, PlayDapp provides SDK benefits and has NFT features. The PLA token has spiked before, but how it’s going to behave in the medium-to-long term cannot be anticipated with certainty because of the token’s volatile price history.

PlayDapp aims to become the pioneering blockchain-powered entertainment ecosystem builder. It provides the SDK, which serves as a means to encourage more quality game DApps to be on board the PlayDapp ecosystem. Also, as NFTs are the most popular implementation of blockchain technology in the gaming industry, PlayDapp supports NFT creation with an easy-to-use token-generating solution. This enables those associated NFTs from different game DApps to be interoperable within their gameplay. In addition, PlayDapp’s games, CryptoDozer and DozerBird, once ranked first and second in the Ethereum Dapp games category sales. Recently, PlayDapp’s flagship P2E RPG “Along with the Gods: Knights of the Dawn” has been popular in the community. All these show the great potential of PlayDapp in the future.