One of the most exciting and interesting aspects of non-fungible tokens, or NFTs as they are more commonly known, is their practical functionality. Gone are the days when virtual economies had no other function than self-governance with an (often small) market for speculative trade, depending on the size of the platform. Instead, early Web 3.0 and Metaverse projects are beginning to realize and make use of the potential that videogames can offer the world of decentralized finance (DeFi). By permitting users to earn within virtual economies, these online platforms can rapidly stimulate growth, allowing them to eclipse other forms of crypto startups faster than any previously thought possible. 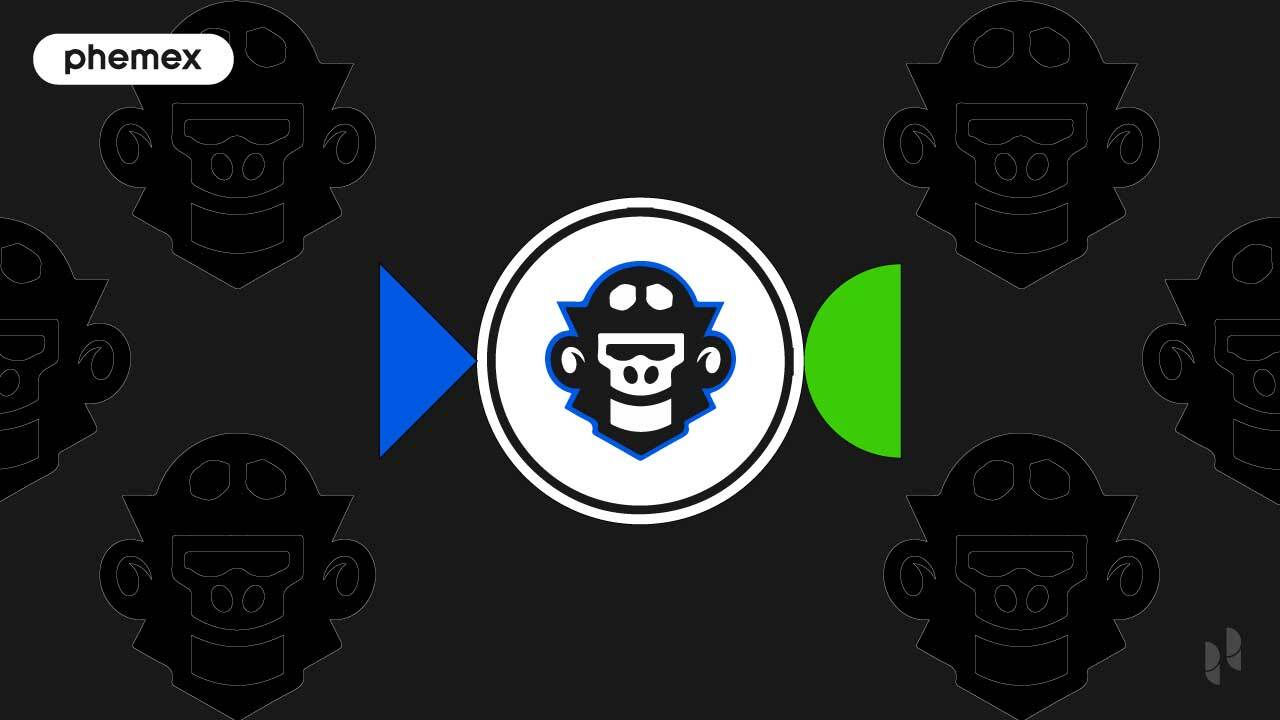 MBS Token, sometimes denoted on exchanges with the ticker $MBS, is the currency used on the Monkey Ball platform. It has a circulating supply of just over 92.2 million tokens (reports vary slightly on this) and a current value of $0.16, for a market cap of $14.76 million.

Monkey Ball is an esports (i.e. sport videogame) platform that combines the concept of NFTs with the idea of online multiplayer European football. Some have described Monkey Ball’s platform as a kind of videogame hybrid, sitting somewhere between FIFA Street and World of Warcraft. This means users can organize/run a fictional team and play against friends, or take their skills out into the wider playing field online – where they can earn real money. Monkey Ball’s platform is built by the clients that use it, who contribute MBS tokens sold by the platform itself to effectively purchase new equipment, stadiums, players, and abilities. These tokens and purchasable items form the basis of Monkey Ball’s online economy, by allowing its users to compete against each other and engage in various play-to-earn activities.

After signing up, each Monkey Ball user is given the option to assemble their 4-a-side (4 players on the pitch at one time per team) squad, made up of Monkey avatars. An avatar is quite simply a character used to represent you in a videogame world, or one member of a team of characters under your control. These avatars will fill out four possible positions on the virtual playing field; either a Goalkeeper, Defender, Midfielder, or Striker. Matches between opposing teams are played in Stadiums, unique virtual locations also owned by users, and can be watched by Spectators. Spectators are another form of user, who can access their Monkey Ball account for free but cannot buy or manage Players or Stadiums until they purchase a certain quantity of MBS token.

MBS tokens are sold by the Monkey Ball platform itself, and can be purchased with fiat or digital currency (depending on the location you bought your $MBS). Importantly, Monkey Ball has made it clear that they plan for their platform to be fully operational on both desktop and mobile devices. This is an extremely important step, as it massively increases potential adoption by removing effective barriers to entry for those who would otherwise lack the required device to play.

Which Blockchain Does Monkey Ball Use? Monkey Ball/Solana Relationship Explained

Monkey Ball NFTs make up the basis of the platform. Every single unique location, character, or item is secured through the use of NFT encryption, which is blockchain-based. Monkey Ball NFTs use the Solana network, a rising star in the cryptocurrency world, to help secure transactional activity on their platform whilst simultaneously enhancing overall usability and speed. Solana has become a popular hosting site for many different NFT platforms because of its ease of use and relatively high level of interoperability, among other things.

Monkey Ball NFTs make use of the Solana system in many different ways, but the main use is to secure their very existence through a form of encryption. This allows every member of the network to hold a copy of the ledger, or accounting book, that digital stores user data to ensure transactional validity. Through this innovative system, DeFi applications can make sure that nobody cheats the system without the need for a centralized third-party to act as a deal-broker.

What Is the Monkey Ball Token (MBS)? MBS Token Explained

MBS token is the currency that is used to tie the whole Monkey Ball operation together. It is a speculative token that can be trading amongst users in the normal way (i.e. on various different crypto exchanges), but its main appeal lies in its in-game practical application. You see, MBS token can be used as a form of currency on the Monkey Ball platform, effectively allowing users to contribute and manage an artificial economy based within a virtual world. When a client purchases a unique in-game entity or commodity it’s actually theirs and no longer buyable for any other player, unless the original client wishes to sell, usually to make a profit. This is made possible through the blockchain encryption mentioned in the previous section, as the ledger stores all information that pertains to ownership. This means that each in-game commodity or entity is an NFT, for all intents and purposes, and is governed by all the normal rules that apply to NFTs.

MBS serve as the currency used in an exchange model for these NFTs, and can be bought from the Monkey Ball platform, as mentioned above. Usually, these tokens would also give their holders the ability to vote on different network changes and upgrades/updates, in a system known in crypto as governance (or DAO). However, this is not the case for the Monkey Ball platform, as they use their own specific token for this exact function. These tokens can be bought, or earned through play, on Monkey Ball, and are called Score tokens – which are sometimes represented by the following initials; $SCORE.

Monkey Ball’s in-game tokens serve several different functions to those that purchase them. Chief among them are:

Through these two primary use-cases, Monkey Ball hopes to distinguish itself as an NFT start-up of a certain type. While the games currency must be functional and user friendly, it’s also extremely important that Monkey Ball continues to update its platform, while making its incentivizing factor for user engagement (i.e. the actual game itself) as appealing and exciting as possible. This will give clients a reason to keep returning after an initial investment is made, stimulate the growth of the entire platform, and give the public a reason to keep buying MBS token for the foreseeable future.

Many NFT gamification start-ups have sparked into existence, only to overemphasize the financial aspect of its business model and neglect the actual game it’s built upon. It’s hoped that Monkey Ball can learn from the mistakes of its competitors, and provide a playing experience that is both interesting and attractive to its potential paying customers. Paying customers that hold the future of MBS token, and its price, in the collective palm of their hands.

The team behind Monkey Ball crypto is made up of innovative designers in the industries of videogame, decentralized applications (DApp), and comic art creation. Their number includes the esteemed Raz Friedman, one of the developers behind such successful virtual gambling platforms as Poker Heat, Slotomania, and Bingo Blitz – among many others. In addition, Shahaf Bar-Geffen has been involved in the Monkey Ball project from the very start, bringing DeFi expertise to the project as previous CEO of COTI (another blockchain-based financial ecosystem). By perfecting their approach to both gameplay mechanics and decentralized economics, these two hope to provide the digital groundwork needed to successfully create an endeavor as ambitious as Monkey Ball.

Money Ball’s tokenization process first started out by way of an initial decentralized offering (IDO) in December of 2021. The company was able to raise over $3 million over the course of almost two weeks, during which it distributed 1,000,000,000 tokens. The token allocation was managed thusly:

Some have been quick to criticize this distribution model, saying that an inordinate amount of the tokens seem to be distributed toward the crypto platform’s progenitors. Whatever the case may be, it’s certainly good to be aware of such a model should you be considering an investment with Monkey Ball crypto.

Monkey Ball’s token has had a rather poor start to its life on the market so far. It first started out on December 12th, 2021 at an individual token price of $1.36, and early interest in the project was at least sparked, if not fully kindled and ignited. Two weeks later the price ballooned to $2.51, with many expecting the platform to go from strength to strength in lieu of its early success. Unfortunately for Monkey Ball’s token and the investors who had put their faith in it early, this did not turn out to be the case. The price began to drop off sharply, and did not stop – finally dropping below $1.00 on January 20th, 2022. 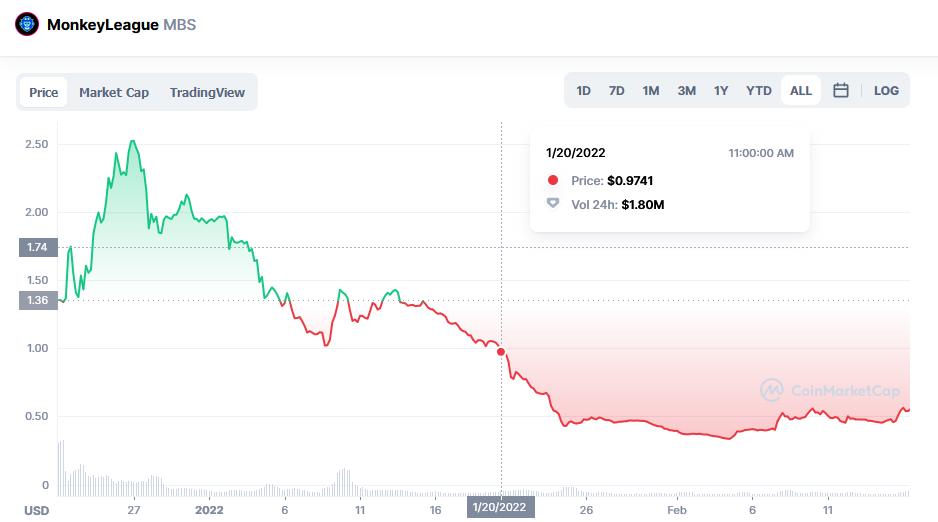 The entire cryptocurrency industry suffered a downturn at the end of 2021 (and heading into 2022), but this was not the only problem for the MBS token platform. Many investors took to the internet to report dissatisfaction with the way things were being run at Monkey Ball – claiming that things were not all as they seemed. In fact, some have said that the platform has failed to deliver on expectations, and should updates not be swiftly forthcoming, those same analysts have inferred that the entire Monkey Ball project may die. While these claims cannot easily be verified, they’re not isolated cases, leaving many to question whether this NFT platform is actually as legitimate as it appears at first glance. The effects of this on the price of MBS token have been noticeable, with it dropping further downwards in recent months. 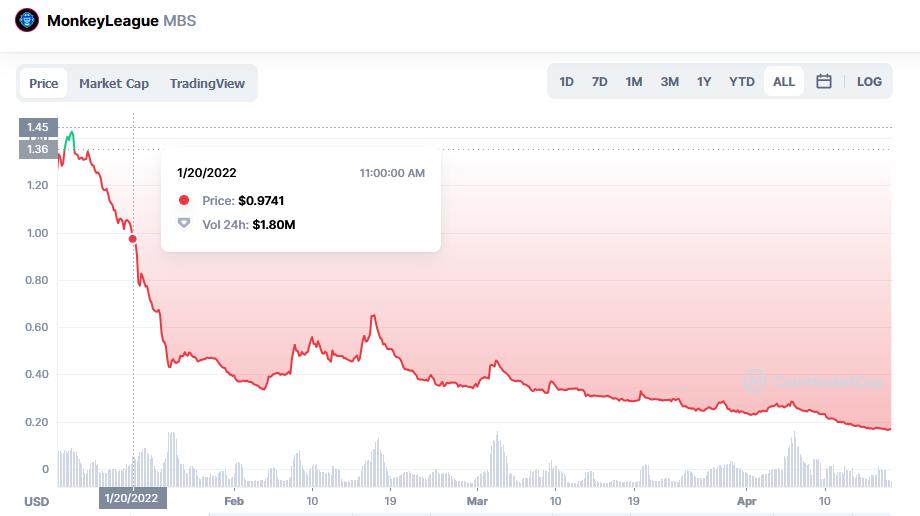 By January 25th, 2022, just five days after MBS’s price had dropped below a single US dollar, it halved – sitting at $0.45. While it seemed for a time that the price may begin to stabilize at this point, with some analysts predicting that it will rebound as it was now a “value asset,” this proved to be untrue. In fact, by March 26th, 2022, the price of MBS had again halved and, if things continue as they’re at the moment (by April 17th, 2022) this is due to happen again in a matter of weeks. 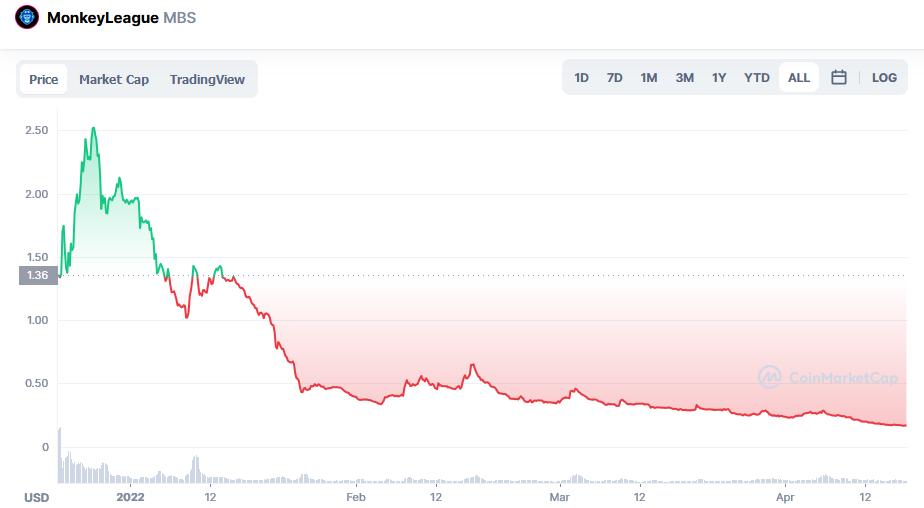 There are multitude of different cryptocurrency exchanges online, some of which offer the option to buy and/or trade in MBS token. Although, in truth, this number is dwindling – and one of the main places that still deals in MBS token is the actual Monkey Ball platform itself. As things currently stand Phemex does not trade MBS token, and has announced no plans to do so in the near future.

Watch this space, as Phemex add different cryptocurrencies to their exchange often, and are always announcing collaborations through their the Phemex official website.

Monkey Ball’s token price is falling. If the platform does not get a much needed injection of cash and/or user adoption, its current trend will continue into the foreseeable future, a future that will possibly end with the demise of the MBS token. However, it’s not all doom and gloom for Monkey Ball. Should the platform manage to release updates that improve on its gameplay elements, and concentrate the interactive side of the enterprise, there’s no reason why it can’t begin to bounce back. Stranger things have happened in the cryptocurrency industry, and Monkey Ball and the MBS token have only been around a very short while. Despite this, their price’s history is a definite cause for concern, and you should probably only invest if you have a genuine, long-term interest in the project itself.