Launched in 2019, Mask Network (MASK), previously Maskbook, is a protocol that allows its users to send encrypted messages, cryptocurrencies, and decentralized applications (DApps) over social networks. MASK trades at $6.90 per token with a capped supply of 100 million, for a fully diluted market cap of $692 million. What Is Mask Network?

Mask Network positions itself as a bridge to connect internet users from Web 2.0 to Web 3.0. Web 2.0 refers to current websites with centralized interactive social networks and user-generated content, while Web 3.0 involves decentralized networks and artificial intelligence.

Mask Network is fundamentally an Ethereum-based peer-to-peer encrypted messaging application for social networks, such as Twitter and Facebook.  More specifically, it’s a portal that allows users to send encrypted messages, cryptocurrencies, and DApps. When it was first launched, Mask Network was only a widget that allowed Twitter and Facebook users to encrypt their messages on the two social media platforms.

During the 2020 Chinese New Year, the project presented itself as more than an encrypted messaging service when it co-launched a “Twitter Red Packet” campaign with MakerDAO. Red packets are traditional Chinese monetary gifts given in envelopes during special occasions or holidays. In the campaign, Mask Network users claimed red packets containing Dai tokens on Twitter. The project garnered interest through this campaign after Ethereum creator Vitalik Buterin gave away his first ETH red packet through Mask Network. Later, to celebrate Bitcoin halving, Mask Network collaborated with another cryptocurrency exchange for a second red packet campaign.

What Does Mask Network Do?

The current internet is filled with products and services offered by big tech companies. For internet users, privacy remains a top concern for users considering such products and services. To regain control of privacy, many privacy-focused companies have launched their own social platforms or applications. For example, Signal, a real-time messaging client was created to replace Facebook’s WhatsApp in response to privacy concerns. WhatsApp allows Facebook to collect data and location details from users, while Signal’s only user identifier is a phone number.

According to Mask Network founder Suji Yan, it’s hard to persuade users to switch from products and services offered by big tech such as Facebook and Twitter. From his perspective, big tech will remain dominant on the internet and fend off competition by acquiring their competitors, similar to how Facebook bought Instagram. Moreover, it’s not uncommon for big tech to copy from rising social media platforms and incorporate the existing functions into their products. Because of this, Yan believes that building a bridge is more beneficial than starting an entirely new platform.

What is MASK Token?

Mask Network’s token, MASK, was released in February 2021. MASK holders are members of a DAO called MaskDAO, through which they have ownership of the ecosystem. MASK is used for governance, protocol incentivization, DApplet development, and premium features. Each token represents one vote, and token holders vote by staking their tokens on proposal contracts.

How Does Mask Network Work?

Mask Network is unique in the sense that it allows users to add a layer of privacy to their online interactions. To do this, Mask Network provides decentralized end-to-end encryption for information transmission and handles the interpretation of information.

Mask Network includes a blockchain wallet for blockchain-related features such as the red packet campaigns, Gitcoin grant funding, and cryptocurrency trading. With the extension, users can wrap crypto tokens such as ETH into smart contracts and share them on Twitter so other Mask Network users can claim them.

The extension also detects messages containing the gitcoin.co URL, and allows users to directly fund the grant mentioned in the message. In addition, the extension detects token symbol hashtags starting with the dollar sign ($) and lets users check the market and exchanges for the token. Users can then use Mask Network’s Uniswap interface to directly trade with the token if it’s on the Ethereum network.

Who Is Behind Mask Network?

Mask Network was founded in Shanghai by Suji Yan, a Chinese former investigative journalist and engineer. Prior to Mask Network, Yan founded Dimension — a space for a series of products that advocate for social liberty in cyberspace. Now, along with its other projects such as TesserPG and Twidere, Dimension also develops and maintains Mask Network.

After it was first listed at $14.51 on February 24, 2021, MASK’s price rose sharply to its all-time high of $31.06. From February 24 to 26, Mask Network auctioned 4% of its total supply through the LBP to determine the actual value of the MASK tokens. Once the price exceeded the market price, people stopped buying the token through the LBP. Because of how the LBP balances the token price, the price plummeted. Now, MASK is down over 70% from its all-time high, at around $6.90. 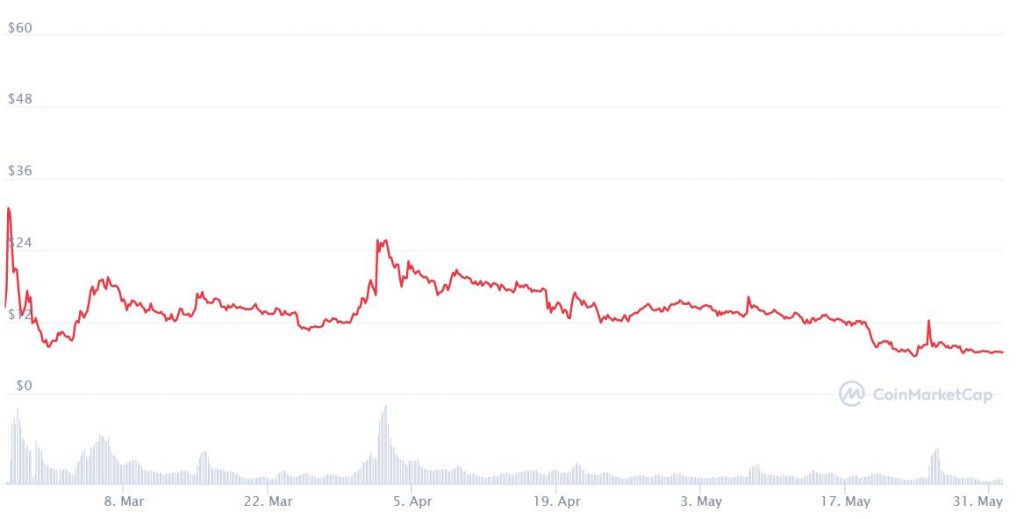 MASK is currently ranked #345 by market cap, and around 12.8 million MASK tokens are in circulation for a total market cap of $88.8 million. Mask Network subjects the majority of its MASK supply to long-term lockups. The public sale, LBP, and airdrop of MASK make up the initial circulating supply. The supply created at genesis unlocks by month 36 (three years) after the initial listing, and the unlocking follows the chart below. The unlocking of MASK over a 36-month period (Source: Mask Network)

What Is the Future for MASK?

Mask Network recently expanded to include buying and selling NFTs. On March 10, Mask Network and DEGO Finance formed a strategic partnership to create more NFT content for users. In the same month, Mask Network announced a collaboration with Cent to add NFTs directly to Twitter. In this partnership, Mask Network plans to allow users to trade NFTs and look at their bidding history within Twitter. The project wishes to expand this function to other centralized platforms like Facebook and Instagram.

On May 18, Mask Network announced a collaboration with Nym, a decentralized platform based on a metadata-obscuring network designed to prevent tracking. The two platforms plan to cooperate in node development, allowing users to use Mask Network nodes on the Nym testnet. With Nym, Mask Network plans to develop an encrypted private messaging service to mitigate the risk of information leakage by users on centralized networks.

Mask Network has been consistent in serving as a privacy-based bridge between Web 2.0 and Web 3.0 by providing DApplets on centralized platforms. As a middleware intermediary for data transfer, Mask Network is similar to networks like Chainlink and The Graph. Chainlink translates real-world data to the blockchain, while The Graph indexes blockchain data and returns it to the real world. Unlike the two machine-based middlewares, Mask Network is more human-centric. Mask Network believes it can reach the same level as the two networks and hopes that they can work together to help blockchain applications.

Mask Network’s foundation remains as a peer-to-peer encrypted messaging application on which DApplets are continuously built to provide blockchain-related features. It is easy to use and only requires each user to install its extension on a major web browser. With its extension, Mask Network brings decentralization to centralized social networks like Facebook and Twitter. With various partnerships and funding, Mask Network is now looking to expand into NFTs and other encrypted messaging services.