UniSwap vs. SushiSwap: Which Is the Better DEX Platform?

Uniswap (UNI) and SushiSwap (SUSHI) are competing decentralized exchanges (DEXs) built on the Ethereum (ETH) blockchain. They are the two leading DEXs within the decentralized finance (DeFi) space. DEXs allow users to swap their assets without transferring the custody of their assets to other parties, thereby avoiding the security issues of centralized exchanges. In addition, DEXs provide better privacy due to the lack of Know Your Customer (KYC) verification and because they are censorship-resistant as no single party can interfere with the transactions. 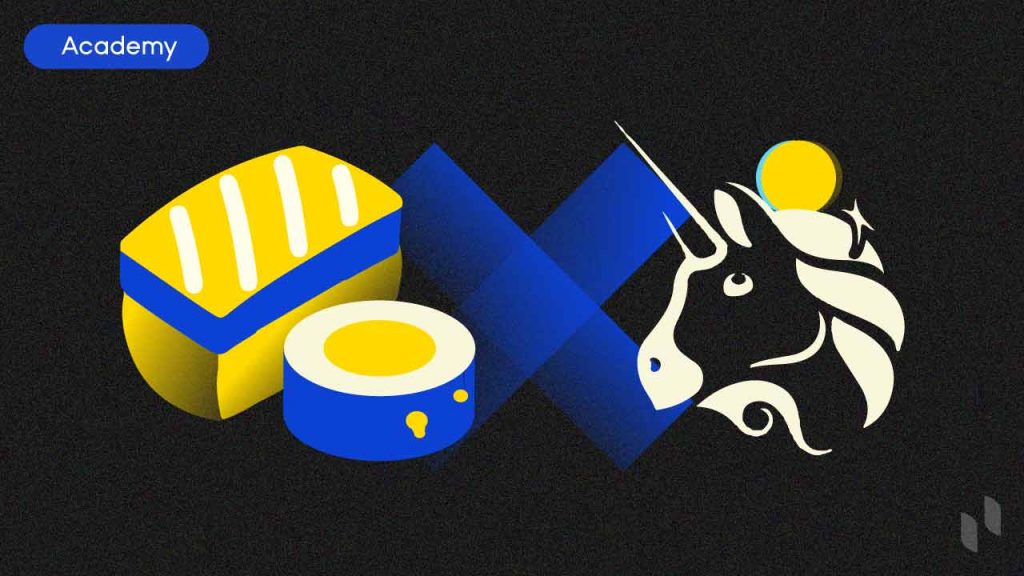 Uniswap is a DEX created by Hayden Adams in 2017 that popularized the automated market maker (AMM) model. This model involves smart contracts creating liquidity pools of ERC-20 tokens that are automatically traded based on a set algorithm. As a DEX, anyone can use the pools to swap between cryptocurrencies for a small fee. In addition, Users can also be liquidity providers by depositing cryptocurrency into the liquidity pools and earn said swap fees as incentives.

What is the UNI Token?

Uniswap released UNI, its governance token, in mid-September 2020. The platform minted 1 billion UNI at genesis, which will slowly enter circulation over four years. The initial launch distributed the UNI tokens to the community via an airdrop and liquidity mining. UNI trades at $18 per token with a circulating supply of 520 million tokens, for a market cap of $9.4 billion.

SushiSwap is a fork, or a copy of Uniswap launched by the anonymous “Chef Nomi” in late August 2020. Like Uniswap, SushiSwap is an AMM-based DEX. The team behind SushiSwap made a few changes to the source code but the overall product remains the same. Hayden Adams once accused SushiSwap of being a copycat trying to “steal” value from Uniswap. He was right as the platform took over $1 billion in total locked value from Uniswap within a few hours after launch.

What is the SUSHI Token?

UniSwap vs. SushiSwap: What Are the Similarities?

Uniswap and SushiSwap are fundamentally similar as both are AMM-based DEXs offering liquidity pools for users to swap or stake their tokens of choice:

As mentioned previously, Uniswap and Sushiswap are both AMM-based DEXs that replaced the traditional order book with automated trading using a set algorithm. The two platforms rely on the AMM model that uses the formula x*y=k, where “x” and “y” represent the amount of two different tokens in a pool, and “k” is the predetermined constant.

As mentioned previously, Uniswap and Sushiswap feature liquidity pools that contain tokens of two different cryptocurrencies. Users can swap one token for another through the liquidity pools for a fee or they can become liquidity providers and earn incentives by depositing tokens into the pools.

UniSwap vs. SushiSwap: What Are the Differences?

Over time, both platforms began introducing new features and concepts. Currently, the differences between Uniswap and SushiSwap include:

Uniswap offers three fee tiers, which are 0.05%, 0.3%, and 1%. The fee tiers represent the risk that liquidity providers are willing to take according to the expected volatility of their pools. For example, stablecoin pairs may charge a 0.05% fee, popular pairs such as ETH/USDT may settle for 0.3%, and pairs with newer tokens may charge a 1% fee. The Uniswap protocol splits the fees proportionally between all existing liquidity providers. In contrast, SushiSwap charges a 0.3% fee for all trading pairs where liquidity providers get 0.25% and SUSHI token holders receive the remaining 0.05%.

Uniswap focuses entirely on its role as a DEX by introducing features specific to DEXs. On the other hand, SushiSwap is expanding into other areas of DeFi. The platform features “BentoBox,” a token vault that also serves as an “App Store” for decentralized applications (DApps). The BentoBox currently has only one DApp called Kashi, a lending and margin trading platform. When users deposit tokens into the vault, the BentoBox holds the tokens like a wallet while Kashi utilizes the tokens for lending, borrowing, and margin trading.

Uniswap does not give any additional rewards to new tokens launching on its platform. In contrast, SushiSwap has a feature called “Onsen Program” which is a liquidity provision system for new tokens. Through the Onsen system, the platform helps newer and smaller projects by offering additional SUSHI rewards to stakers of these newer tokens. The extra rewards encourage users to obtain such tokens for staking purposes, thereby accelerating project growth.

Which is a better Investment, SUSHI or UNI?

Uniswap and SushiSwap are the top two DEXs within the DeFi field. This section compares the two platforms in terms of DeFi metrics to see how they stack up against each other in recent months. The key metrics involved in the comparison include total value locked (TVL) or liquidity, total trade volume, and revenue:

Total value locked (TVL) or total liquidity refers to the total amount of assets locked behind DeFi smart contracts. A high TVL means many users have staked their cryptocurrency in DeFi. It is one of the most popular metrics used to identify how much value is in use or available for use across a platform.

From the figure below, SushiSwap managed to take the lead in TVL during its launch near the end of August 2020. As previously mentioned, this was because the platform managed to siphon Uniswap’s liquidity by offering SUSHI rewards that Uniswap did not have at the time. However, Uniswap fought back in mid-September 2020 by launching its UNI token which bolstered its TVL above $2 billion, beating SushiSwap. At the moment, Uniswap has a higher TVL at $4.0 billion, while SushiSwap has $3.4 billion. 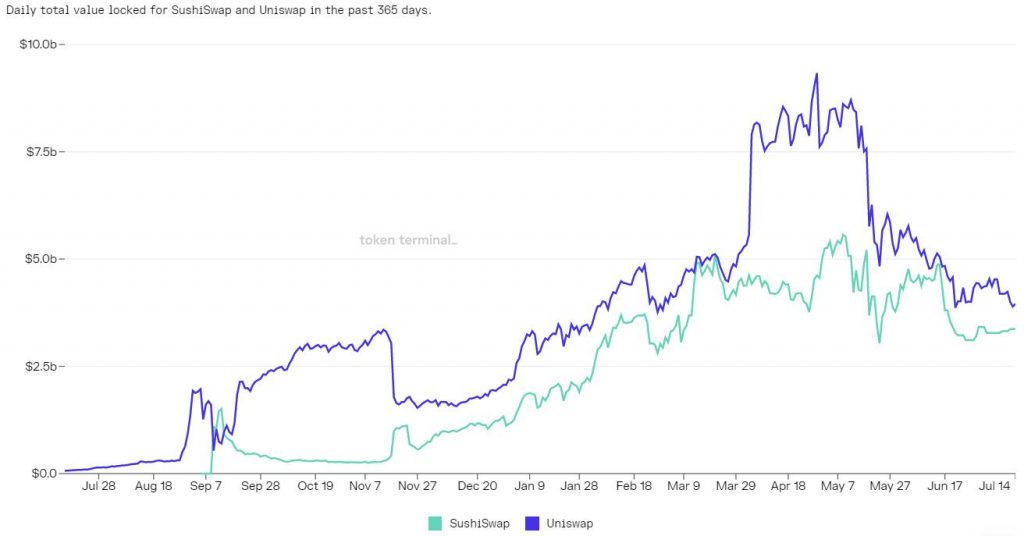 The total value locked for Uniswap and SushiSwap in the last year. (Source: Token Terminal) 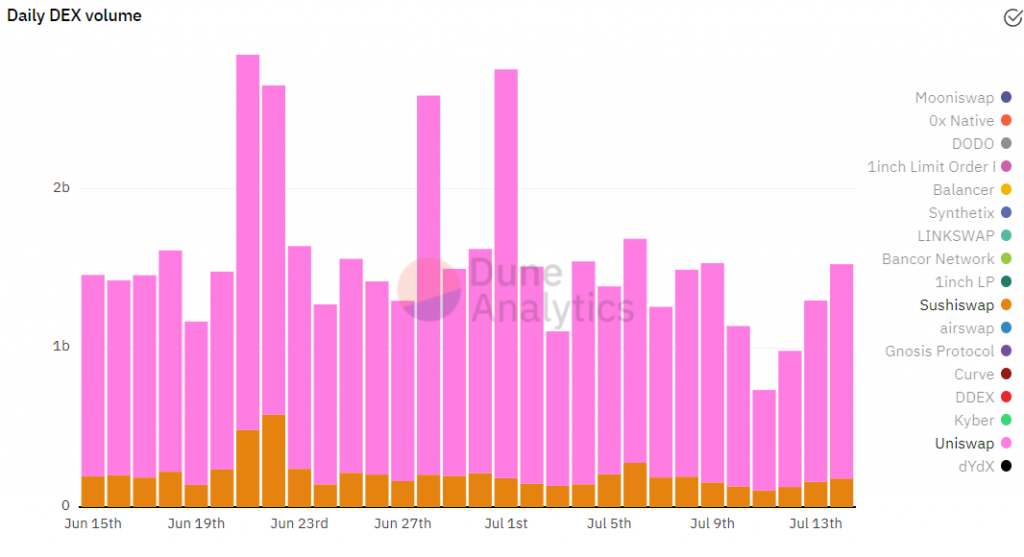 The daily trade volume of Uniswap and SushiSwap across the past month. (Source: Dune Analytics).

Revenue refers to the total value that a platform generated from processing transactions. It is another key metric that determines the success of a platform. From the figure below, Uniswap takes the lead again with its monthly revenue consistently greater than that of SushiSwap. However, SushiSwap has been slowly gaining ground since its launch. In September 2020, SushiSwap’s revenue accounted for only 14% of the total revenue generated by both platforms, but in June 2021, SushiSwap managed to generate 36% of the total revenue of both platforms.

The monthly revenue generated by Uniswap and SushiSwap across the past year. (Source: The Block).

Uniswap and SushiSwap are two very similar platforms. Both are AMM-based DEXs that offer token swapping through liquidity pools (for a fee). In both platforms, the swap fee is also a reward for liquidity providers that provide liquidity to the pools. While the two platforms were identical at first, they did introduce features unique to each platform. The major differences between Uniswap and SushiSwap include fee tiers, liquidity mining, the concentrated liquidity feature, lending and margin trading, and a reward system for newer token projects.

Uniswap is currently the leading DEX platform in terms of total value locked, trading volume, and revenue generated. SushiSwap is in second place. Even though SushiSwap’s total value locked and trading volume is relatively lacking compared to Uniswap, its revenue is gradually growing in a catch-up trend. Nonetheless, the landscape might remain the same in the future once Uniswap re-enables its liquidity mining program, which may further cement it as the dominant DEX platform.