What is Linear Regression for Crypto Trading: The ‘Curve’ and the ‘Slope’ 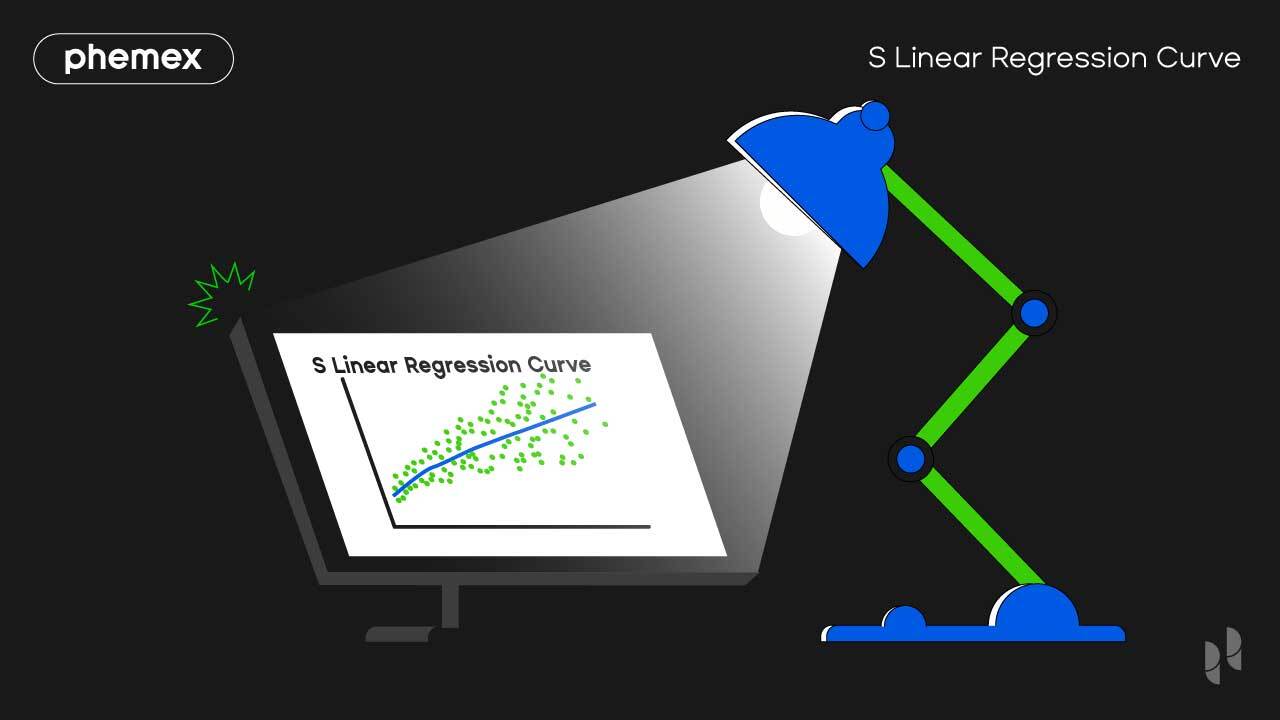 What Is S Linear Regression Curve?

What Is Linear Regression Slope?

The Linear Regression Slope is an advanced momentum oscillator that trends in positive and negative territory. If the oscillator is trending above the mean slope, Bitcoin is in a positive trend. The trend strength varies based on how far extended it is above the mean value. Both the regression slope and the S linear regression curve can be used in conjunction for trend trading.

Regression is used for predictive analytics For example, if a store has increased sales every month for a year they can use the formula to calculate future sales increases.

The Linear Regression formula is as follows:

The linear regression equation was invented in 19th century England by Sir Francis Galton, one of the most well-known Victorian era mathematicians. The first Linear Regression trading indicator was invented by Gilbert Raff in the 90s. Raff introduced the Linear Regression forecast indicator in his book “Trading the Regression Channel” in 1996. It was first adopted by stock traders and later used in the crypto industry. There are over a dozen linear regression-based indicators but the Slope and the Curve indicators are the most well-known.

The Linear Regression slope formula is based on two variables. Linear regression indicator variables are known as “trading pairs” in the crypto industry. If we take Bitcoin as the first variable, we can assign it a second variable in USD or a stablecoin such as Tether (USDT). These two variables use the equation Y = a + bX.

If Bitcoin is the “A” variable, and USDT is the “B” variable, then “X” is the n-period of the USDT variable. Once the value of Bitcoin fluctuates in USDT, the slope is created. As the indicator gathers historic data, it records all the fluctuations and predicts a possible future trend line.

The indicator calculation multiplies the slope value times 100 and then divides it by the current price. The slope on the Linear Regression Slope derives data from historic n-1 bar periods. The default period value is 14. If we’re using it on the daily chart, the slope will curve based on the average value for the last 14-day periods.

Moving average indicators such as the Moving Average Convergence Divergence (MACD) use closing prices for the day (00:00 UTC) over a certain period. The linear regression curve calculates the data using a regression line between two specific dates, and then merges the results. A trader can manually adjust the dates over the n-periods they need.

How to Use Linear Regression Indicators?

How to Trade With The Linear Regression Slope?

The Linear Regression forecast indicator is an oscillator that identifies trend strength for Bitcoin, indicating if we’re in a bullish or a bearish trend. An effective Linear Regression Slope trading strategy is to wait until Bitcoin reaches support and resistance levels: 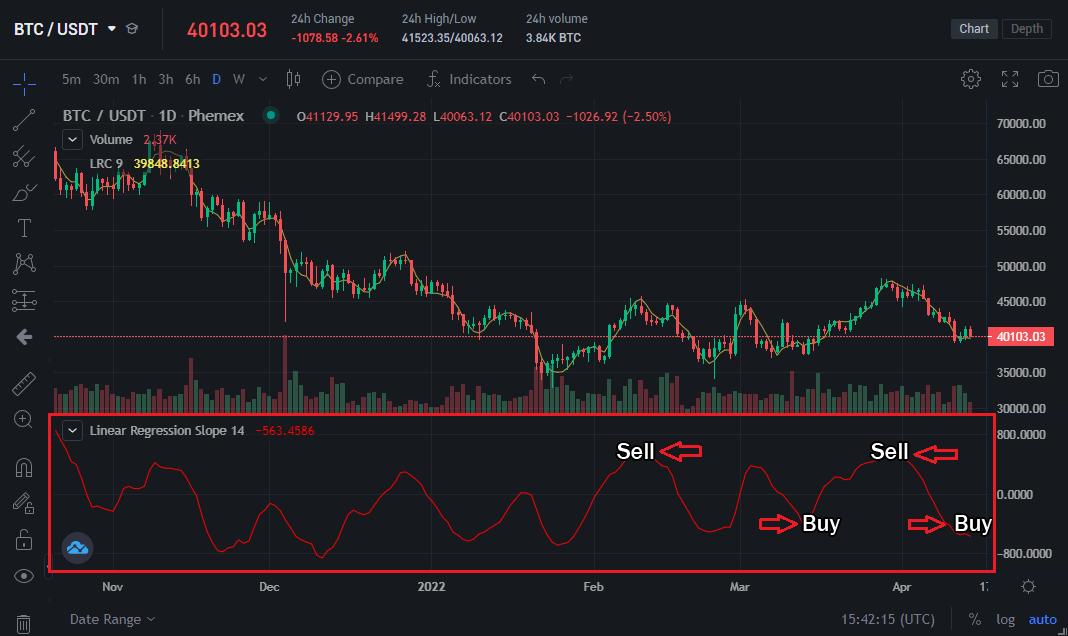 Defensive traders can wait until a trend reaches the mean value of zero. If Bitcoin is in an uptrend from the bottom and reaches the middle of the simple linear regression slope, we can expect it to continue on the uptrend until it peaks and reverses.

How to Trade With The Linear Regression Curve?

The Linear Regression Curve is most effective over a long-term chart such as a weekly chart. If we switch to the 1W (weekly) chart, we can see how Bitcoin performed historically with the regression curve: 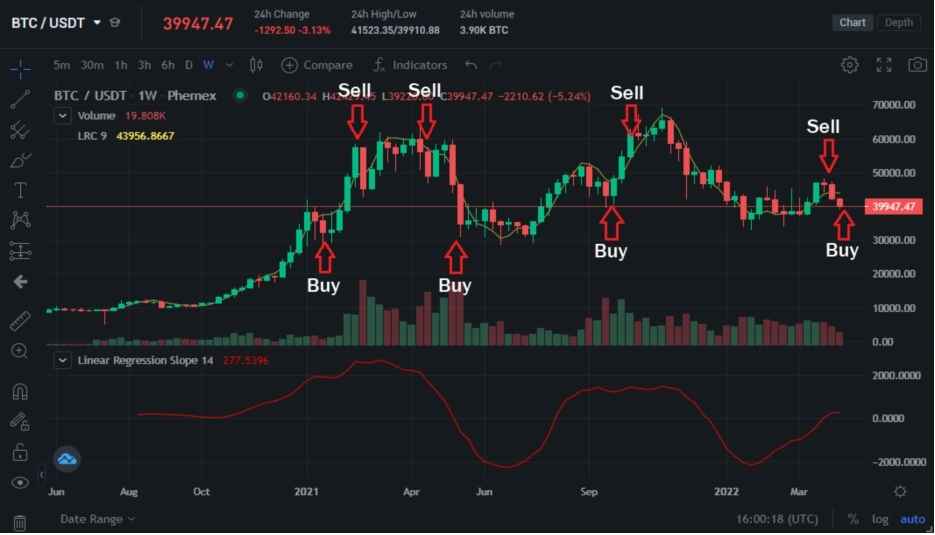 Bitcoin fell below the regression curve at the start of the 2021 bull run, but quickly recovered and went above the curve twice. During the May 2021 crypto crash, Bitcoin wicked below the curve multiple times. It traded above the curve in November 2021 when it made a new all-time high of $69,000.

How to Trade Linear Regression Channels? 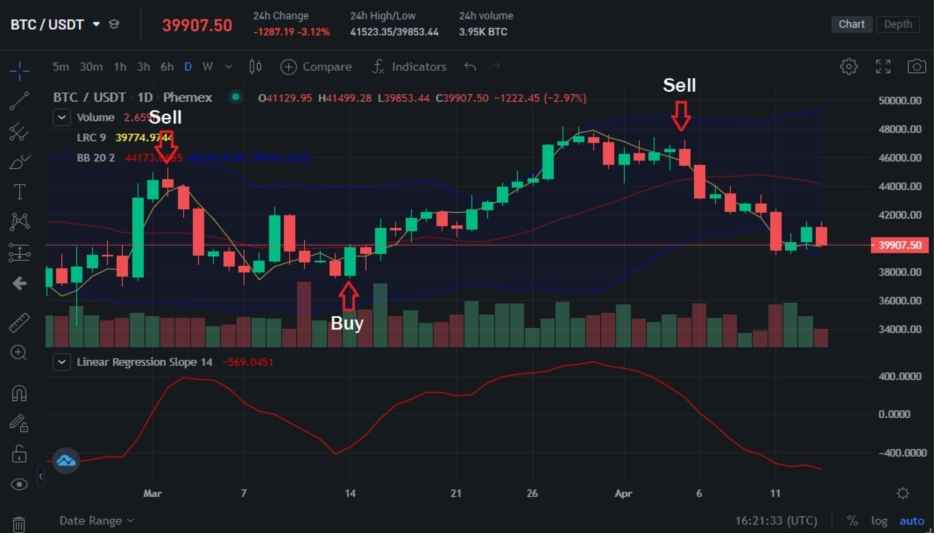 The two most popular Linear Regression indicators are the curve and the slope. A smart trader can use both to get context about Bitcoin and the direction it’s going in to optimize their trades. The Slope indicator is a momentum oscillator, but it is not range-bound. It’s mostly for trend trading and measuring the strength of a trend.

The curve indicator may appear similar to moving average indicators, but it will output highly different values. It has historically proven to be one of the most accurate indicators for long-term trading. Using it on the weekly or monthly charts can tell traders the best entry points for Bitcoin.

Traders that bet on price reversals will benefit from the slope indicator because Bitcoin often reverses when it hits the upper or lower boundaries of the indicator. Traders who buy and hold Bitcoin for the long term can use the curve indicator to Dollar Cost Average (DCA) and strategically invest their capital.