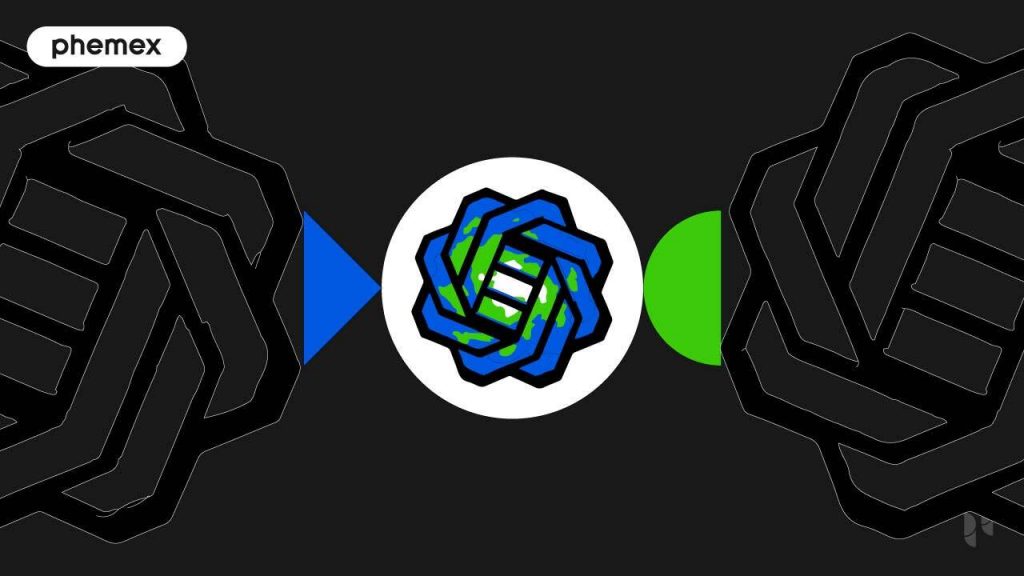 What is Gods Unchained?

Gods Unchained (GODS) is an aesthetic Metaverse NFT card game where players battle each other using fantasy cards. Players start battles with a card deck and must defeat their opponent to win crypto rewards. The GODS token is an ERC-20 token used for in-game asset purchases. The token is currently trading at $0.73 with a market cap of $25 million. The circulating supply is 23 million and the maximum supply is 500 million.

The game’s motto is “If you can’t sell your items, you don’t own them“. Gods Unchained stands out from other metaverse games because users are 100% in control of their NFTs and tokens. The GODS token is not a governance token, but it’s a built-in reward token necessary to play the game. Players progressively upgrade their status as they win battles and this increases their profit margins.

While the ecosystem is built on Ethereum (ETH), gamers don’t have to endure high gas fees the way they might on a blockchain card game such as Axie Infinity (AXIE). It’s built on Immutable X, a layer-2 scaling solution for Ethereum that allows users to mint, trade, and transfer assets for cents on the dollar. Over 700,000 NFTs have already been traded on the Gods Unchained marketplace.

GODS token can be traded on Phemex now:

Who Is Behind Gods Unchained?

The development behind Gods Unchained is spearheaded by gaming industry veterans: Chris Clay (CEO), James Ferguson, and Robbie Ferguson. Chris Clay was the game director for Magic: The Gathering Arena, one of the world’s most popular card games. He’s led projects for EA Games and Riot Games with over 15 years experience.

James Ferguson is an MIT graduate with experience in eCommerce development. Ferguson was featured in Forbes’s “30 Under 30”. Robbie Ferguson is an Australian entrepreneur who founded KPMG, Australia’s second largest crypto exchange. He was also one of the founders of Immutable.

The team spent 3+ years developing the game and released the beta in 2020. The beta version generated a lot of hype and over 600,000 players signed up when it launched.

How To Play Gods Unchained?

To get started, users have to sign up for an account. The registration process is similar to regular PC games and users have to input their email and download a game launcher. The Gods Unchained mobile version will be released in 2022. 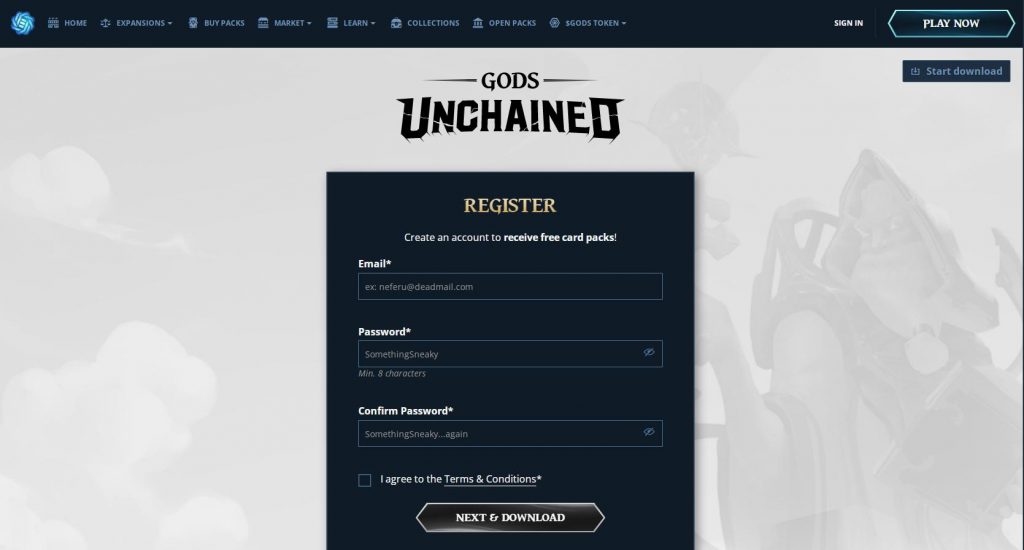 Register to download the Gods Unchained game on PC.

Registration for the game is free, and users are given a free “Welcome Kit” that includes 70 game cards. These cards are given fast-track players on the inner workings of the game. The “core cards” given at the start are not valuable, but if traders make their way in the game they can receive valuable rewards and develop a profitable strategy.

How To Profit On Gods Unchained?

The profitable aspect of the game is “Flux”. Flux is a game resource that allows players to upgrade their free cards. The player’s ability to win battles will be influenced by the quality of their cards. If a player wins a battle, they win flux and they’re awarded a higher rank in the game. The game’s rating system is called “The Gauntlet of the Gods”. Simply put, the more a gamer plays, the higher their rank in the game and the easier their access to flux.

Flux cannot be bought or sold on the market, and has to be earned by winning battles. A player starts a battle with 30 cards on a deck and they have 30 health points. They deploy their cards in the game strategically to inflict damage on the enemy. If they kill the enemy by destroying their cards, they receive flux points and these can be used to upgrade their rank in the game and get better cards.

There are six gods in the game, and users can win multiple god cards by securing consecutive wins. The following is a breakdown of how many gods they can win:

Gamers can play with their gods indefinitely and there are no punishments for losing a battle. Flux rewards can be scaled with each victory using a process called “Fusing”. If a player wins consecutive rounds, they win a higher amount of flux and fuse it. Fusing in the Gods Unchained gameplay.

Fusing is the final part of the play-to-earn model. This is where players can convert their flux to valuable NFTs and sell them on the market for GODS tokens. There are four tiers of NFT cards based on their rarity: Common, Rare, Epic, and Legendary.

To unlock a Common card, gamers need 20 flux. To unlock a “Legendary” card (the most valuable card), gamers need 200 flux. NFT cards can be instantly withdrawn and sold on the Immutable X marketplace or used inside the game to play and win more battles.

How to Improve Chances of Victory in Gods Unchained?

If a player wants to enhance their chances of winning the game, they can buy packs directly from the Godsunchained marketplace or purchase rare NFT cards on Immutable X. For example, the “Legendary” card pack costs $20 and includes 1 Legendary card, 1 Rare card, and 3 common cards: 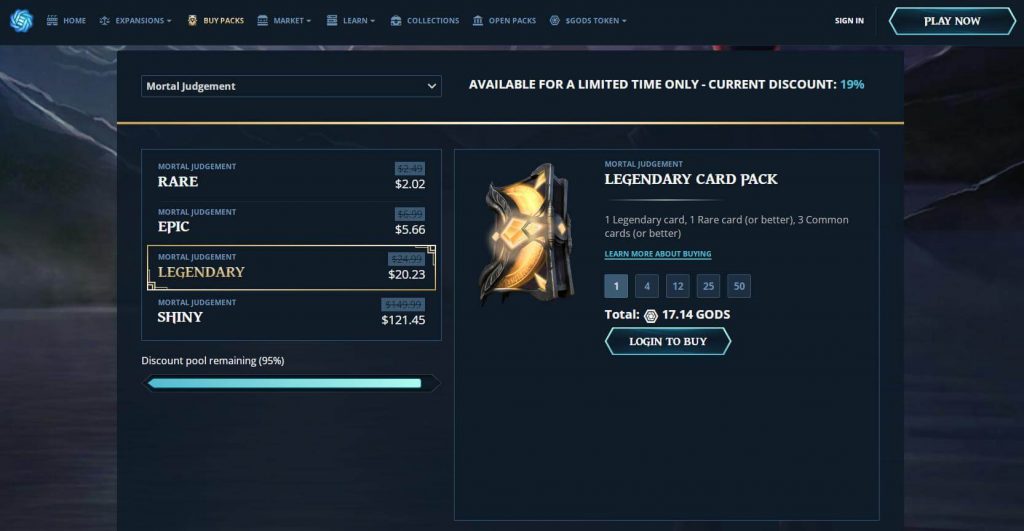 The transactions are settled in the GODS token over Immutable X — a scaling solution for Ethereum that eliminates the high gas fees of the network mainnet. Players can also head to the Gods Unchained NFT marketplace and purchase cards using Ethereum: Players have already traded $50+ million worth of cards on the Immutable X marketplace.

What Is The Gods Unchained Coin?

The Gods Unchained coin runs on Ethereum as an ERC-20 and was designed to power the “Play-to-Earn” aspect of the Gods Unchained game. The GODS coin stands out from other Metaverse tokens because it’s not only used for governance proposals for the DAO, but it’s actually required for in-game asset purchases.

If a user wants to purchase expansion packs to improve their chances in the game, the payments are settled in GODS. The GODS token is also used to reward users who fuse their flux in the game and mint NFTs.

There is a maximum supply of 500 million. The distribution for the token is the following:

The token performance proved bullish in the initial stages of the launch in Q4 2021, but declined over Q1 2022: The price-performance of the GODS token in the last 6 months.

The token has been trading steadily since. The decline is partially due to the state of the altcoin market which was affected by the Bitcoin’s (BTC) recent downtrend. GODS can be staked on the platform in the “Staking Rewards Pool” to earn APY. The token has seen relatively stable price-performance over the last two years with slight stagnation.

GODS is currently trading on Phemex:

How to Buy GODS Token?

To buy GODS on Phemex, follow the instructions below. Phemex offers both spot and contract trading for investors to choose from. However, for beginning crypto buyers, spot trading is recommended.

Blockchain gaming can be very profitable because gamers hone their battle skills and earn money by winning cards and exchanging them for crypto. The Gods Unchained project aims to give back to metaverse gamers by letting them have full control over their NFTs and game assets.

The game is aesthetic, easy to learn, and rewards gamers progressively. The more a gamer spends time playing, the higher their status in the game. The implementation of Immutable X trading saves gamers fees for withdrawals and trading. This makes Gods Unchained one of the most promising metaverse projects to date.