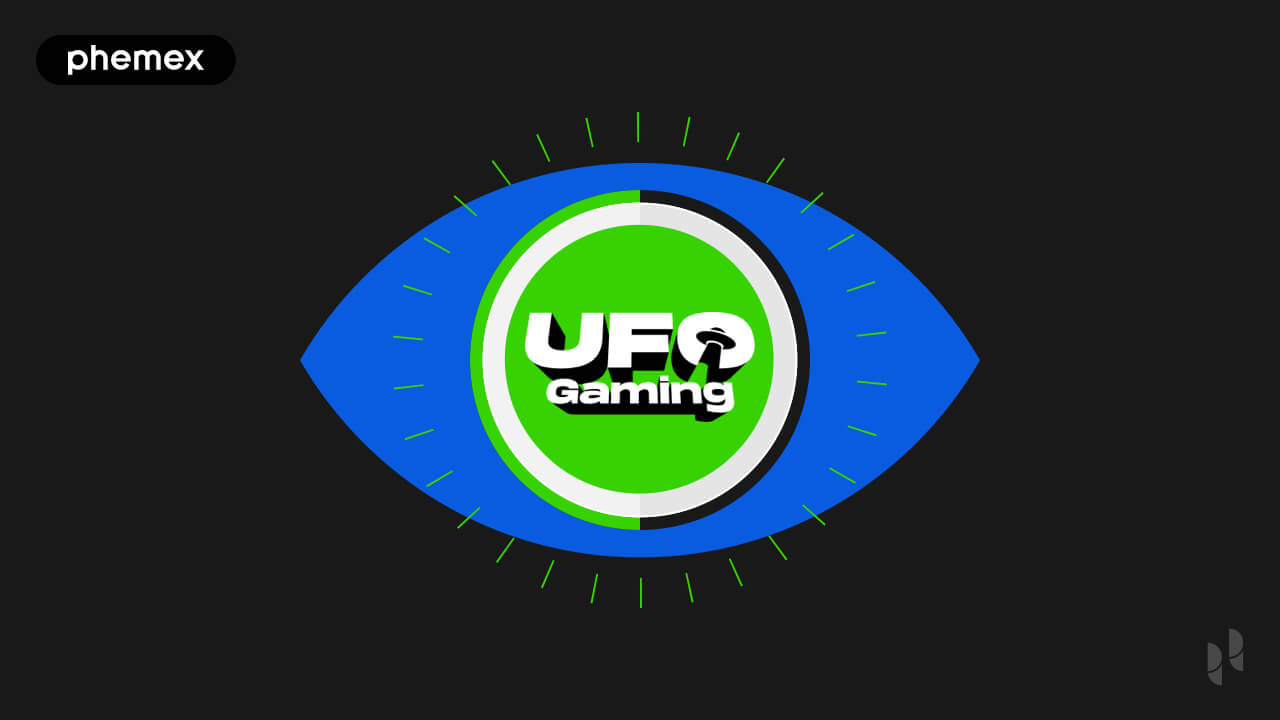 What Is UFO Gaming?

The evolution of blockchain gaming has produced many different platforms—those where virtual real estate is the main object of desire (such as Sandbox), those offering play-to-earn features (such as Gods Unchained), or breeding-and-collecting games (such as Axie Infinity).

UFO Gaming combines all these in its Dark Metaverse. Launched in July 2021, the Ethereum-based game platform positions itself as a game for gamers first, and blockchain enthusiasts second–a response to the complaints from hardcore gamers who argue that blockchain games ruin the entire experience of gaming because of how the gameplay and rewards are designed only for money-making.

UFO Gaming says that it is 100% decentralized and community-owned, being run by a pool of UFO holders.

$UFO is the primary token in the UFO Gaming ecosystem. To play the first game, Super Galactic, players have to first stake $UFO tokens and buy UFO NFT characters; they then profit from both in-game and staking rewards. The UFO virtual world offers gamers the chance to play and earn money with UFO games on different planets. Here, they can:

PPAY is earned as a staking reward and is needed to buy soldiers to play the game.

Another token, UAP, is the in-game reward token, which can be earned by completing missions. UAP is needed to breed new soldiers, creating new UFO NFT characters that can be traded or used in-game.

In addition to its one and only game so far, Super Galactic, where players act as soldier bounty hunters, UFO Gaming news states that it will enter the realm of eSports. Although currently not open to users, the platform has already bought an eSports team and trialled it in an Apex Legends tournament with a UFO Gaming prize worth $10,000.

An NFT marketplace is also being planned, although there has been no launch date yet. On this marketplace, UFO gamers will also be able to collect in-game rewards (UAP tokens), as well as breed their NFTs, besides the usual activity of trading NFTs.

The UFO game, Super Galactic, requires the purchase of NFT avatars in the form of soldiers to play. (Source: UFO Gaming) 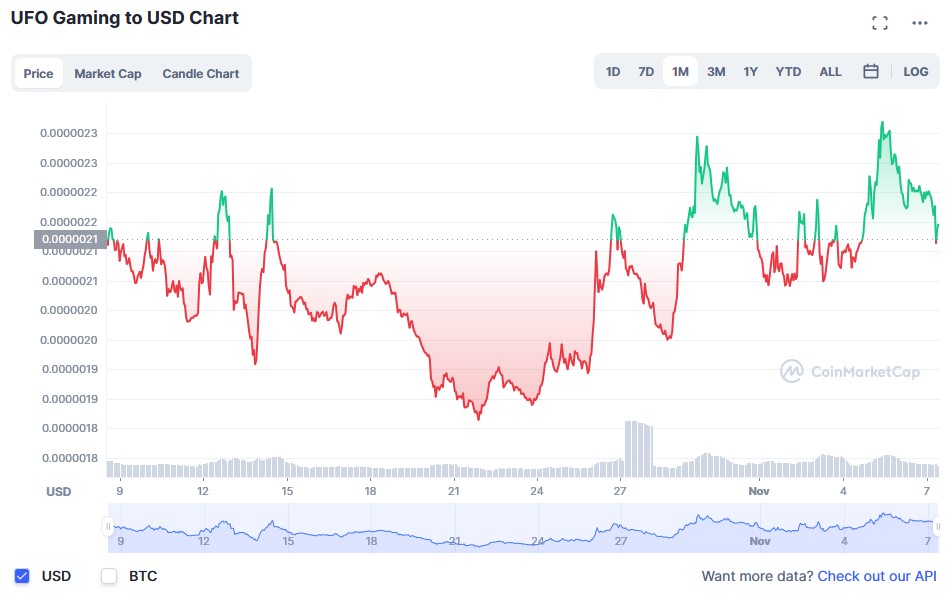 Is UFO Gaming a Good Investment?

It is hard to make a price prediction about UFO Gaming.

On one hand, the Metaverse is gaining traction, the technology needed to launch blockchain gaming into a whole new realm is on the horizon, and UFO Gaming unites all of this on one very powerful (and newly merged) blockchain, Ethereum.

However, despite being over a year old, it still only has one game to offer, which is only available on Windows and Android. It was launched in July 2022 but only has around 1,000 downloads.

On socials, UFO gaming member numbers remain low (remember that many members will be a part of all socials):

On the gaming platform itself, the Dark Metaverse gaming rooms were completely empty when visited.

UFO Gaming news hints at more projects, but there are no set dates. In addition, delays on items such as videos are being blamed on Covid, which makes one wonder how many people are working on developing the project.

One factor is that UFO gaming has yet to gain the traction it may have expected, and without an audience, it will not be able to rise. 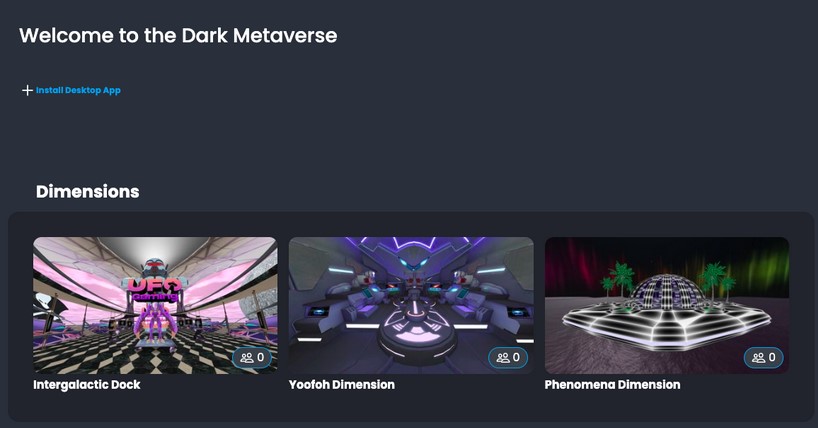 None of the Dark Metaverse’s rooms had any UFO gamers in them at the time of play. (Source: ufotoken.io)

Another factor to keep in mind is this:

However, when looking at the leader board (and considering the low UFO gaming price), it is clear that there are not many individuals staking–the top 5 UFO stakers alone account for nearly 29% of all staked UFO (over 314,700,000,000 UFO), meaning the entire staking community could be formed of only 15 to 20 UFO crypto holders.

As such, do be cautious when investing. 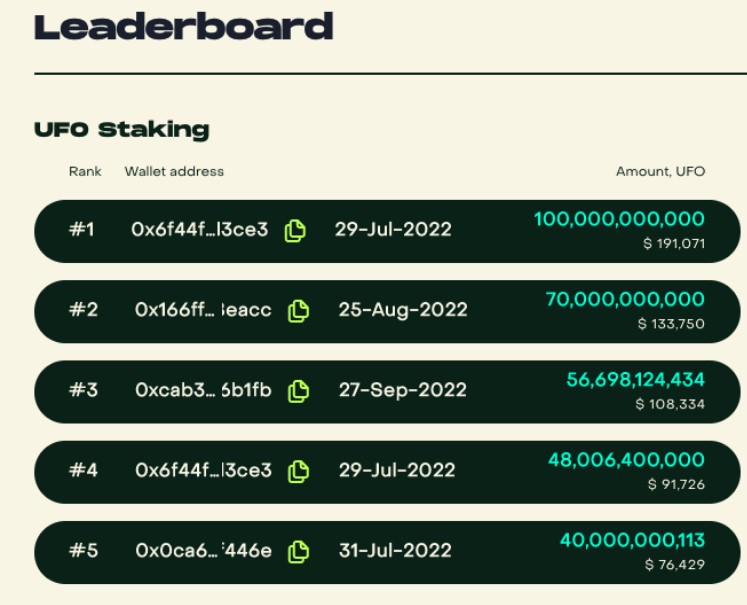 Making a UFO Gaming price prediction is therefore difficult, as although it does offer the ingredients for Metaverse success, the team is moving slowly.

How To Buy UFO Gaming Coin

If you have decided that this project is a penny crypto worth investing in, or you want to buy $UFO to participate in UFO Gaming staking and play Super Galactic, you can check out DEXs like UniSwap.