What is Dent: Mobile Data as a Commodity

Launched in 2017, DENT is an ERC-20 token that enables users to buy, sell, or donate their excess mobile data through the decentralized DENT Exchange. DENT trades at $0.002 per token with a circulating supply of 95 billion, for a total market cap of $225 million.

The traditional telecommunications model struggles to scale beyond the realm of the individual consumer. Mobile data use generally stays within local and regional areas, resulting in additional costs for the international traveler.

Most smartphone users are locked into their data options, and end up using either too much or too little. Any unused data is returned to the network. Not only is the consumer losing money, but also telcos are losing revenue due to expensive routings between foreign and local telcos. Given that mobile data use is growing exponentially every year, this is a missed financial opportunity. According to a study by Cisco, 2016 saw approximately 7.2 billion gigabytes of mobile data use. This pales in comparison to the projected 77 billion gigabytes that will be used in 2022.

In an attempt to solve these issues, telcos are expanding into regional and global partnerships as well as joint ventures. For example, EU travelers can now share data within the EU region. Global platforms for roaming, cloud-based communications, and SaaS offerings have also been adopted, yet mobile data remains a fragmented industry.

The Dent Ecosystem was formed as a potential solution to these challenges. It is built on the Ethereum (ETH) blockchain and employs the DENT ERC-20 token. Specifically, the ecosystem’s aims are to:

How Does Dent Work?

The technologies that come together to make up the Dent Exchange (Source: https://www.dentwireless.com/)

Dent is made up of three components:

The DENT Exchange employs Ethereum smart contracts to execute three types of transactions. These are user-to-user transactions, P2P international data packages for roaming, and Initial Data Offerings (IDOs) from telecommunication companies. The size of initial offerings can be set by mobile data providers together with Dent, which acts as a virtual operator. Dent also provides additional depth to the market with its own data package offerings.

Who Is Behind Dent?

DENT Wireless, the company behind Dent, is based in Hong Kong and also has an office in Singapore. It was founded by CEO Tero Katajainen in 2014, and created on an existing automated market system with in-built risk management functions. Katajainen holds a Master of Science degree in Electrical Engineering, and has previously co-founded multiple Internet startups, including Dovecot Oy, the company behind the popular open-source mail server Dovecot.

In 2017, the team expanded to include two more co-founders: Mikko Linnamaki and Andreas Vollmer. Vollmer has 12 years of experience in mobile app development, and also co-founded the company TDSoftware. Linnamaki has a background in fundamental mobile architecture.

To date, there are nine members on the team with a combined experience in FX trading, mobile technologies, and software engineering.

Currently, Dent appears to be in the early stages of partnerships. Its most recent is with Dutch neobank Bunq, Samsung Blockchain, and G + D Mobile Security. So far there are no signs of large telcos partnering with Dent or using the Dent Exchange. 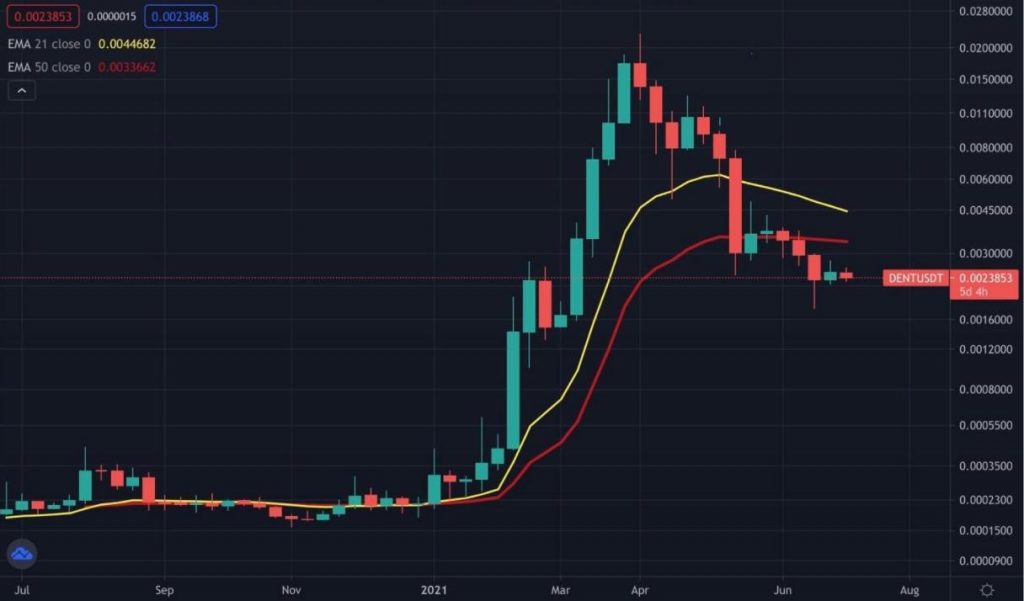 In January 2021, the DENT token rose from $0.0002 to a high of $0.19. The March 2021 altcoin rally pushed its relative strength index (RSI) above 94, suggesting that the token was overbought during this time. It has since corrected, echoing the downward movements of Bitcoin, and currently sits around $0.002. It is currently down 98% from its all-time high of $0.10 during the 2018 bull run.

DENT is currently ranked #167 by market cap and has a circulating supply of roughly 95 billion, with additional tokens being released quarterly. Its capped supply of 1 trillion coins might seem quite high, but according to co-founder Linnamaki, it is necessary if the company is to become a global one with active users. He has pointed out that if just 20 million mobile users top up with 1000 DENT tokens per month, 20 billion DENT per month is needed. Dent claims to already have around 26 million active users as of June 2021.

During its initial coin offering (ICO) in 2017, Dent allocated 70% of its coins to investors and the public. The remaining 30% supply was allocated for company tokens, telco acquisitions, user incentives, and employee salaries. This also included a $1 billion pledge to support the United Nations Sustainable Development Goals (SDG) program for developing countries.

Dent ended up selling only 8.6 billion tokens during its ICO, meaning that the remaining 91.4 billion were kept by the team. Critics alleged that this went against the decentralized ethos of cryptocurrencies. Investors were worried that a large percentage of tokens would end up being owned by telcos and a small number of “whales.”

Distribution of DENT tokens as of July 6, 2021 (Source: coinlore.com)

Intotheblock’s indicators show concentrations of large holders of DENT, as well as the number of transactions greater than $100,000 from 1-7 July 2021. (Source: intotheblock.com)

Dent founders have been accused on social media (Reddit and Bitcointalk) of dumping tokens on the market, and in turn, causing the token price to decrease. Although one should be cautious about information coming from social media, Etherscan shows that in May 2021 approximately 2 billion tokens were moved from the team’s wallet for sale.

Is Dent a Good Investment?

Dent’s plan to revolutionize the mobile data industry is ambitious, and it still faces numerous challenges.

Firstly, there must be a large enough user base for Dent to function at all. With its stated 26 million users across 80 countries and its partnership with Samsung, all seems to be on the right path. However, this year the company has delayed some of its expected milestones, including its new iOS marketplace app, its reward systems, and its plan to optimize data during the Japan 2021 Olympics. Regular updates on some of these milestones are missing from its official Twitter account.

A second risk comes through the telcos. These companies must be willing to use Dent rather than see it as a competitor. Dent has pointed out a potential way for telcos to start capitalizing on mobile data growth, although it remains to be seen whether large telcos will start using the Dent Exchange.

As Dent is built on the Ethereum blockchain, it can also be affected by any developments on Ethereum. Some current issues affecting Ethereum include its high gas fees and congested network, which it hopes to relieve soon in a dramatic move to proof-of-stake.

Additionally, the value of the DENT token is subject to volatility that many cryptocurrencies experience. Price depreciation could surprise consumers and resellers who were aiming to buy cheap data through the Dent ecosystem. Then there are possible regulatory measures towards cryptocurrency in general, as well as the price movements of Bitcoin that could affect the DENT token. While users exchanging fiat to DENT and “hodling” may keep the price on the bullish side, DENT will likely follow the movements of Bitcoin just as most altcoins do. With the Dent team owning roughly 40% of all DENT tokens, this could be another factor that determines a price drop through token “dumping.”

And finally, perhaps the most important factor currently facing Dent is how the COVID-19 crisis will affect international travel. This will obviously have an effect on mobile data usage, and in turn on how widely Dent’s ecosystem is adopted.

With the exponential growth in mobile data use, an opportunity has arisen for a “middle-man” to re-sell what would otherwise be wasted mobile data. Although there are no obvious concerns about Dent’s technology, the question for blockchain advocates is whether Dent can become a truly decentralized platform, unlike its centralized telco counterparts. With Dent’s updated and ambitious roadmap recently released, it remains to be seen how the company and the DENT token will fare in the future.