What Is Constellation Network: The DAG Token Explained

These challenges include complex business processes, an abundance of data that needs to be processed, and the lack of technical know-how regarding blockchain technology. Unfortunately, the status quo of which many blockchains are not just limited in scalability and customization but also lack transaction speed and are costly in their use tends to worsen the situation these entities face.

In light of bringing an end to this dilemma, Constellation Network (DAG), which was launched in 2017, pledges to bridge real-world businesses with blockchain technology by offering a user-friendly framework with open-source developer tools, vast scalability, and a free and highly-secure network. At the time of writing, DAG trades at $0.1687 per coin with a circulating supply of over 1.26 billion, leading to a market cap of more than $212 million. 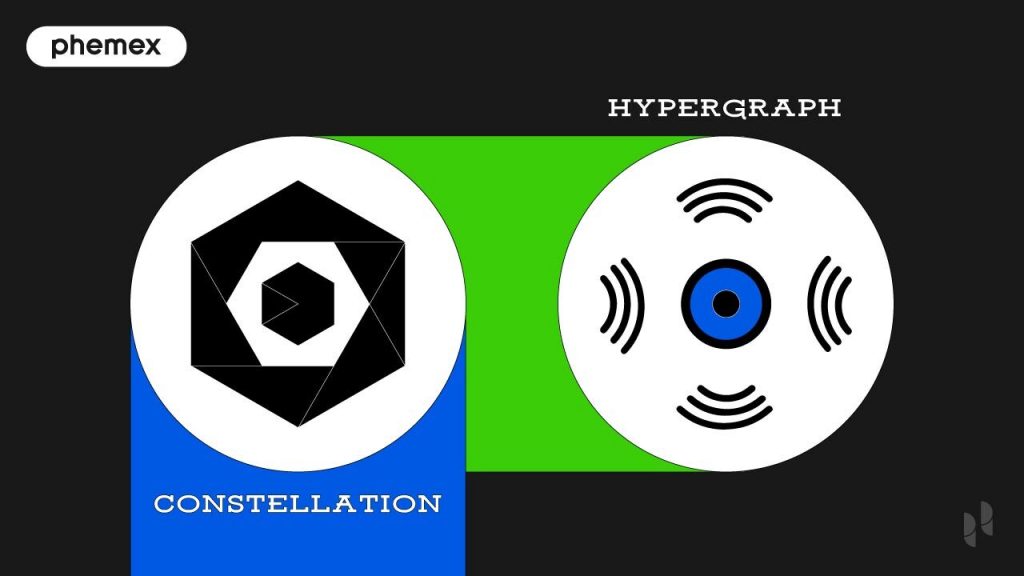 How Does Constellation Network Work?

Constellation Network democratizes existing digital infrastructures and acts as a global accounting, notarization, and audit layer of all digital information and activity. It has developed the core infrastructure and rails (Hypergraph Network) to transact currency and index to the network via DAG, its native coin. It has also established the programmable interface for building solutions, the so-called Layer 0 standard, to merge the concept of data collection, exchange and transfer of value, and the ability to transact in an open network.

HGTP is divided into nodes. A node can send a transaction to several nodes, which then spreads the transaction across the network (not necessarily to all nodes). Constellation’s PRO consensus allows a broad range of devices to validate transactions. PRO is also called Proof-of-Meme, and it aims to secure honest nodes within the network. As PRO is a reputation-based system, there are certain factors that affect the reputation of a node, such as availability, loyalty to the network integrity, and history of the network.

The data within the nodes flows in bundles and is categorized by rank. This feature creates a distributed model of operation with high transactional throughput.

The Layer 0 standard allows many solutions to be built upon it in the form of state channels (microservices). State channels are those subnets with their own consensus metrics which converge with the Layer 0 standard. They can be considered as an upgraded version of smart contracts because they can, for example, host entire blockchains. This also indicates that far more possibilities and functions can be imagined from this standard. Examples of these state channels are blockchains, sidechains, and decentralized exchanges.

What is DAG Coin?

DAG is the native utility token of the HGTP network. It empowers the seamless exchange and interaction between different state channels and nodes that form the network. Its utilities include:

What is Hypercube Blockchain?

Hypercube is set up to help businesses migrate to a state channel. It’s a user-friendly interface that allows businesses to deploy their own blockchain, mint their own tokens, and transfer their processes and data to a secure blockchain network. The Hypercube provides multiple tools to fulfill its goals, including:

Who Is Behind The Constellation Network?

Benjamin Jorgensen is currently the CEO of the company. Before that, he founded Klick Push, an advertising technology company that implements music into digital advertising initiatives. He is now also the co-founder of Lattice Exchange, an application built on the Hypergraph Network that converges crypto asset trading solutions and traditional securities.

Benjamin Diggles takes up the role as the Chief Strategy Officer (CSO), in which he oversees Constellation’s liaison with governments and enterprises. He is also in charge of consortia programs and the implementation of Constellation’s global partnership strategy. Prior to co-founding Constellation, he worked for Oracle, Universal Pictures, and Disney Pictures.

Mathias Goldmann is the Chief Operations Officer (COO) of Constellation. He has previously joined the European Central Bank as the IT training manager and PwC as the consultant and auditor for banking and real estate. He was also the founding partner of the Bureau, a blockchain incubator, and one of the advisors of HowLive, a next-generation live event streaming platform.

Wyatt Meldman-Floch is Constellation’s Chief Technology Officer (CTO), who developed the Constellation protocol from scratch. Before joining Constellation, he was an intern and researcher at NASA’s SETI Institute, a non-profit research organization that seeks the origins and prevalence of life and intelligence in the universe. Moreover, he is an experienced engineer who worked for firms like Zignal Labs, a software development firm, and Rally Health, a wellness and fitness services provider.

Also, during this period, Constellation Network released positive news regarding the project, which might have powered the price uptrend and hinted at the upcoming bullish trend. On April 28, Constellation launched the Hypercube and Project Submissions program, which encouraged potential developers to build solutions on the Hypergraph Network using the Layer 0 standard. Just days after, Constellation announced that it would launch Alkimi Exchange, a decentralized advertisement exchange and the first state channel business on the Hypergraph network. 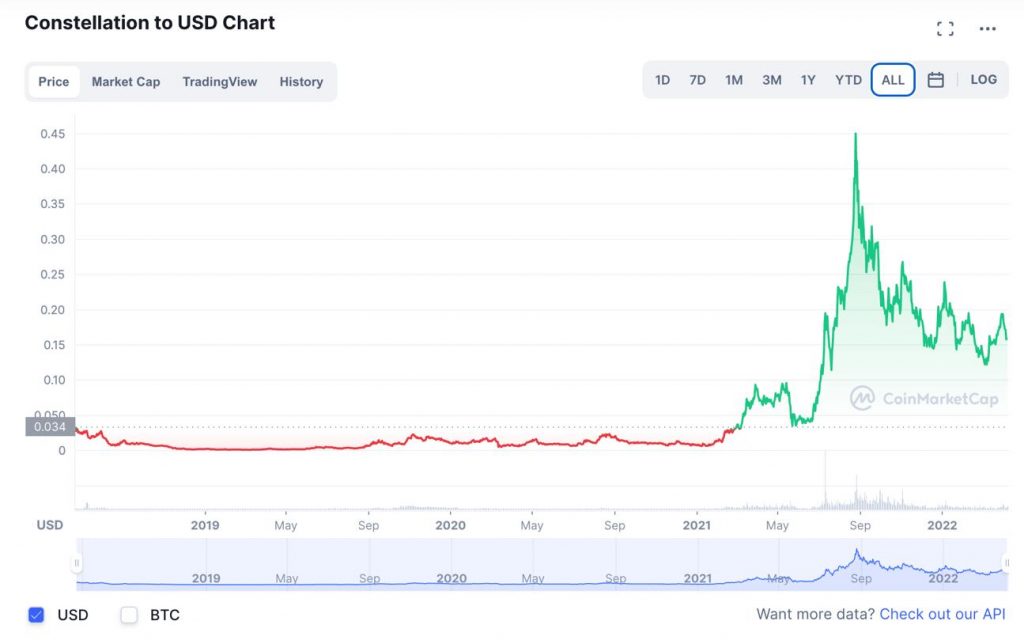 DAG’s price uptrend continued and finally reached its all-time high of $0.46 on August 26, 2021. This price rise might be attributed to the US Air Force’s announcement on the same day that it will employ Constellation’s Hypergraph Network to provide data security with the Department of Defense’s commercial partners. It was stated that Constellation and Kinnami Software Corporation would develop an end-to-end data security solution incorporating blockchain encryption and distributed data management for the US Air Force’s commercial partners.

After that, DAG’s price has steadily remained above $0.10 until now. At the time of writing, DAG trades at $0.16 per coin with a circulating supply of over 1.26 billion, leading to a market cap of more than $212 million. DAG currently ranks #270 in CoinMarketCap’s cryptocurrencies leaderboard in market capitalization.

What Is The Future of The DAG and Constellation Network?

In 2021, Constellation fulfilled almost all of its targets mentioned in its roadmap. These included launching new tokenomics, state channels, Dag Terminal, Stargazer Wallet with multi-chain support, Lattice Exchange, Constellation Incubator, and Data marketplace. However, it should be noted that the progress on the Data marketplace has not been released so far.

A major milestone of Constellation in 2021 was the launch of the Lattice Exchange. It is a decentralized exchange (DEX) that seeks to support cross-chain swaps and a broad range of Decentralized Finance (DeFi) applications. So far, Lattice Exchange has reached a market capitalization of over $29 million.

Currently, Constellation is focusing on the Mainnet 2.0, an upgrade to its existing network. With the upgrade, Constellation aims to enhance the transaction speed, scalability, and efficiency of the Hypergraph Network. This upgrade is divided into three phases and is set to launch in the second quarter of 2022.

Experts commented that the connection between the DAG coin utility and the projects in the Constellation ecosystem increases the long-term network value and boosts Constellation’s popularity. Yet, the fact that the centralization of Directed Acyclic Graph (DAG) technology in the network’s solution remains a possible risk. It is reported that there are currently 110 foundational nodes that are prone to cyber-attacks. Failure to move to decentralized node voting might leave the network with cybersecurity issues. Also, DAG technology and solutions have not been evaluated on a large business scale. Thus their practical efficiency remains unknown.

Constellation Network is a project dedicated to tackling existing blockchains’ issues that slow down the technology’s mass adoption and make it difficult for developers to build applications with solid business logic. It can meet real-world requirements by offering a user-friendly framework with open-source developer tools, vast scalability, and a free and highly-secure network. However, the centralization of its DAG technology in the network’s solution and the unclear practical efficiency of this technology remain the issues that Constellation has to solve.