What is a wedge pattern?

Wedge patterns suggest an incoming reversal to a coin’s existing short-term trend or its larger overall trend. A wedge formation is characterized by two converging trend lines that move upwards or downwards on the chart. There are two kinds of wedges that can appear on candlestick charts: rising and falling wedges. 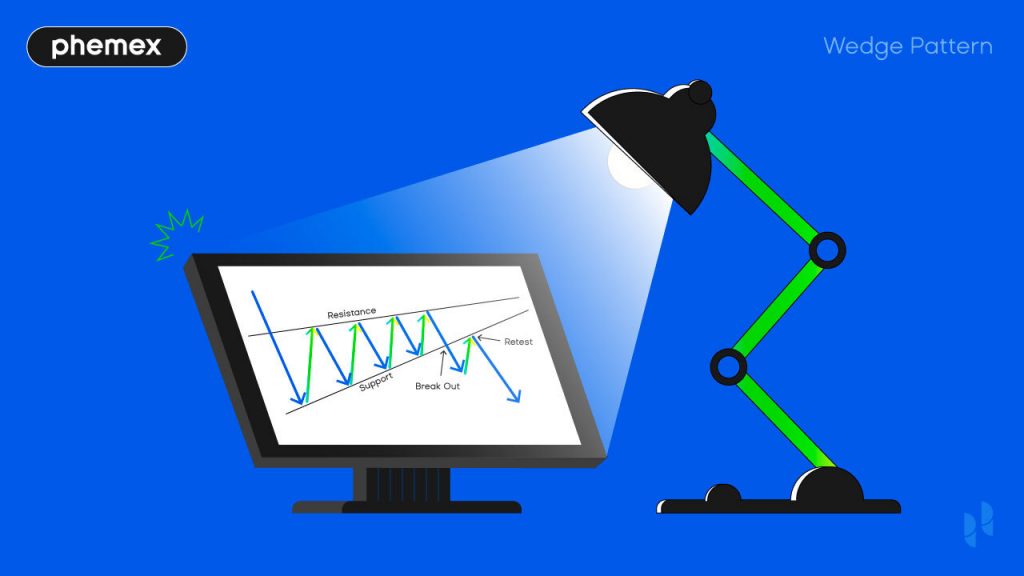 What is a Rising Wedge Pattern?

In an ascending wedge, the support is steeper than the resistance with higher lows, but the dynamics reverse for descending wedges which presents more prominent lower highs than lower lows. Depending on the direction, wedges can also inform analysts of either a bullish or bearish trend fatigue. 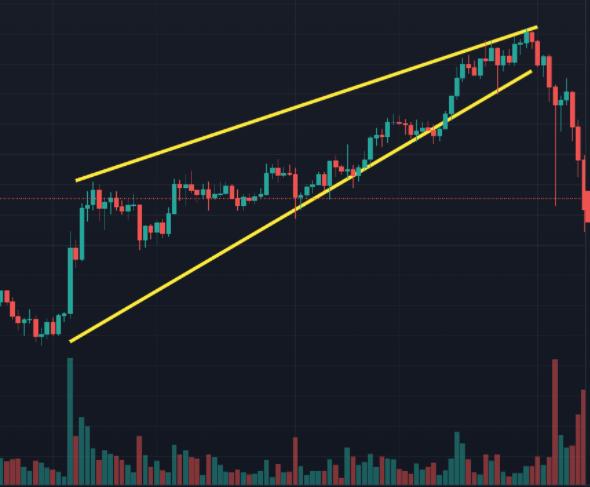 example of a rising wedge pattern

What is a Falling Wedge Pattern?

During a rising wedge pattern, the uptrend tends to weaken, resulting in a reversal into more bearish price action. However, when falling wedges are formed, they often signal the market preparing to summon a price reversal upward. Wedge patterns occur frequently and are often combined with other confirmation signals to solidify the analysis.

How to trade rising and falling wedge patterns?

In many instances, holding a position over a long period can prove quite profitable, but deciding when to exit after the long hold is also crucial. The synergy of the combination can yield rewards that outperform trades driven by herd psychology and sentiment, and there are abundant examples from the crypto markets where experts have forecasted a price trend using wedge pattern formations.

Use Wedge Patterns to find a Breakout Reversal

In March 2021, when Bitcoin was trading around $58,900, Patrick Heusser (a trading expert) observed an ascending wedge that was still converging. He predicted that the uptrend might be coming to an end, resulting in a downward breakout. As expected, Bitcoin plunged below the $54,000 mark in the week that followed, eventually crashing by nearly 14% to touch the $50,950 level.  As illustrated by this event, the rising wedge can be a reliable messenger of a breakout reversal and can provide strong indications of uptrend fatigue. 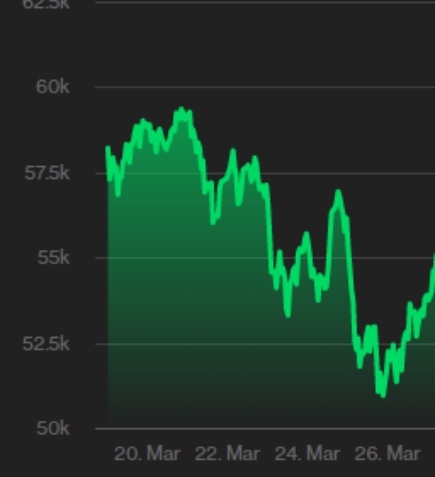 Use Wedge Patterns to determine where to place stop losses

Wedge patterns are also instrumental for traders to accurately determine where to place their stop losses. A stop loss is a limit order placed in advance to limit trade losses in case of sudden market movements. If one wants to take profit, or perhaps just break even in a worst-case scenario, they can place the stop-loss order at the price point when they bought the asset.

Technical indicators and price chart patterns are essential to technical analysis and price predictions. Still, they must be applied correctly and in optimized combinations and conditions to maximize their success rate. Indicators like moving averages, oscillators, and Bollinger bands are the most common when charting cryptocurrency price actions, but these charts also form patterns like pennants, triangles, and wedges that alert traders to the possibility of an upcoming breakout.

How pivot points are used for drawing wedges

Wedge patterns are usually drawn between pivot points on a chart. Pivot points follow the five-point system with eleven candles. Lows are determined when the candle in the middle closes lower than the other five candles on either side, and highs are spotted when the sixth candle closes higher than the five candles on either side. There can be multiple pivot points that form patterns in a single time frame, and a trader’s skill lies in the ability to select the right ones to power trading decisions.

Drawing trend lines by connecting these pivot point highs and lows informs analysts of a coin’s general price trend. They also indicate support and resistance levels for a particular time frame, and when two trend lines converge to form wedges in either an upward or downward direction, it shows the flattening of a trend with the possibility of a trend reversal.

Wedge Patterns vs. Triangles vs. Pennants

Besides wedges, there are a few patterns that share similar characteristics, which makes it hard to distinguish between them, namely, pennants and triangles. With pennants, the trend lines converge to form a symmetrical conical shape, compressing price volatility as they meet. An essential characteristic of a pennant is the flagpole, which is depicted by a vertical line formed by a tall bullish or bearish candlestick at the beginning of the pennant.

This initial large price movement also determines the direction of the price explosion since pennants are continuation patterns rather than signals of an incoming reversal. Pennant breakouts can be either bullish or bearish depending on the shape of the pattern and the ongoing trend. When the price breaks upward out of the pennant resistance, it’s usually a bullish sign. However, when the price spills under the pennant’s support, a bearish move could be in the works.

Note that pennants differ from symmetrical triangles because they do not possess the flagpole at the start of the pattern. Symmetrical triangles, and triangle patterns in general, are formed over more extended time frames than pennants, though in most cases, they are also continuation patterns, meaning the price movement sets off in the same direction as the triangle. Unlike triangles, however, Pennants are primarily used to forecast short-term price movements.

Wedges, pennants, and triangle patterns resemble each other, but their key differences lie in the direction of their trend lines. For instance, with wedge patterns, both trend lines move in the same direction, but one is steeper, causing them to converge. However, with triangles, one trendline moves at a much steeper angle to meet the horizontal support or resistance line.

It can be dangerous to confuse these patterns with wedges since they each have separate utilities, preferred time frames, technical characteristics, and signaling formats.

What are the Characteristics of wedge formations?

Novice traders are prone to viewing patterns like wedges as profit-generating miracles. This can lead to attempts at trading the exact peaks and troughs of a trading chart for maximum rewards, but while this sounds infallible in theory, such an approach can prove counterproductive in practice. One sound strategy would be to place orders during price moves above the first point of a falling wedge, or slides under the starting point of a rising wedge.

It’s also possible for more experienced traders to misread certain trends for wedge patterns. The best way to identify any pattern and a common rule of thumb, especially for wedges, is to let the price peaks and troughs touch the pattern’s resistance and support lines at least three times. This ensures enough testing of the support and resistance lines before the trend is confirmed.

Example of a Falling wedge pattern

Earlier this year, Polkadot’s (DOT) price was seen traveling in a falling wedge pattern. The price plunged from around the $50 level to under $11 over the wedge before a bullish breakout back above $40.

Example of a Rising wedge pattern

Bitcoin also recently fell off a rising wedge that had been forming since the first week of September. The breakout level of around $52,900 pushed BTC off a cliff to the $45,380 level after a mild protest of the bulls near the resistance. Wedges are not a rare sight and can be expected to be formed regularly. Moreover, they are relatively easier to study and reasonably accurate in their signals.

Technical analysis is an important skill that demands clarity about trading concepts. Not all indicators and patterns work the same, and some suit certain asset classes more than others. However, wedge patterns are relatively common for cryptocurrencies and can be reliable indicators of incoming trend reversals.

Depending on the intent, wedge patterns can be found in various time frames ranging from mere minutes to entire months. However, especially when analyzing cryptocurrency price trends, it is advisable to study multiple time frames to detect overlapping trends. A bearish trend reversal may take place inside an overall bullish trend, or the other way round, which is why performing a comprehensive analysis is vital to producing a more well-rounded insight on an asset’s price action.