What Are Continuation Patterns: Geometric Shapes to Trading Success

When looking to make the right trading decision, a certain amount of technical analysis is required. Although there are many tools that can be used to help this process, all good traders will look for patterns in the price charts. The patterns found in these charts can indicate whether an asset will turn bearish or bullish and to what extent, thereby helping a trader decide what action to take. One group of patterns that is used time and time again for both traditional securities trading and crypto trading are continuation chart patterns. 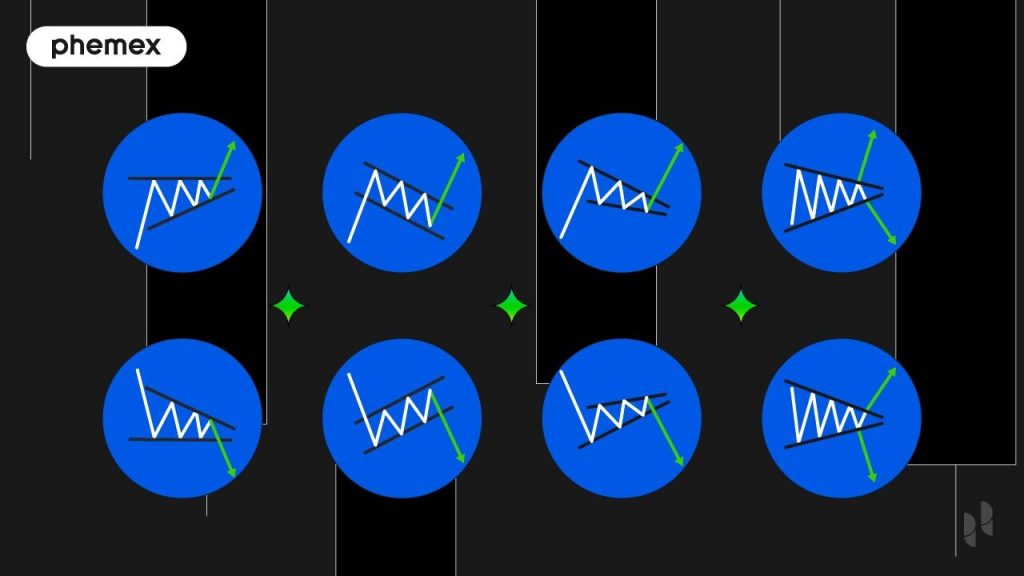 What Is a Continuation Pattern?

Continuation patterns can be used over different time periods too and are therefore helpful for day traders or long-term traders, which are more common in the crypto space. However, continuation patterns are not fool proof, and should therefore be used in conjunction with other indicators. Continuation patterns are a great indicator to help a trader make their trading decision, but they should not be used alone. Traders will back up their findings with other trading tools and indicators, sometimes even waiting for the breakout to happen to first confirm the breakout direction before entering a trade.

How to Use Continuation Patterns

Continuation candlestick patterns, being that they are usually spotted during technical analysis on an asset’s candlestick pattern, can indicate stronger or weaker price breakouts, as well as being signs of increased volatility. The different intensity of these trends can usually be noted in the following ways:

Continuation patterns are quite easy to spot, but they do exist in many different forms, with different responses required for each one. Some of the major ones to look out for are the following:

These continuation patterns are known as flags because of their appearance, where the trend is the flagpole, and the ensuing consolidation period is shown by a continuation pattern going against the previous trend in a rectangular shape. They are often found in strong uptrends and downtrends and can be either bullish or bearish. They are most indicative of a strong breakout when their waves (in the rectangle area) are tight and bounce up and down at equal heights, bouncing up to the height where the initial trend finished.

Pennants are very similar in appearance to flag patterns, as pennants are also formed of a flagpole and appear during strong trends. A pennant pattern’s flag, however, finishes in a triangular shape as opposed to a rectangular shape. These can be bearish or bullish.

Wedge patterns are slightly more complex than other continuation patterns as they can signal a continuation or reversal of a trend, depending on what type they are and in what trend they are found.

They come in two types and are particularly useful for shorter trades, such as daily or 4-hour trends:

These patterns appear as a flagpole (the trend), followed by the continuation pattern, which is represented by two converging trendlines (shaped like a triangle) that are upward sloping. When a rising wedge is seen in an uptrend, then it is indicative of a reversal pattern in the asset’s value. When a rising wedge is found in a downtrend, meanwhile, it is indicative of a continuation of the trend. This pattern is considered a bearish pattern.

Triangle continuation patterns usually range over a much longer period than a wedge pattern. For example, one upward line can be over a period of multiple days. This makes them particularly good for long-term traders, such as crypto traders. Additionally, triangle patterns can be found as ascending, descending, or symmetrical styles.

Continuation patterns are a great way for traders to locate powerful breakout trends before they happen, thereby maximising their chances of making large returns and minimising risk. As with any technical analysis pattern, tool, or indicator, however, these patterns should not be employed alone, instead being paired with multiple others to verify predictions. Continuation patterns are some of the easiest to spot, with flag patterns in particular being good for beginner traders. Once a trader has familiarised themselves with these useful technical analysis patterns, the last remaining thing to do is to learn how to protect oneself in case of false breakouts — as after all, no prediction can be fool proof. To help with this, a trader can use market, limit, and stop orders.