The Diamond Pattern: What Is It and How To Use It? 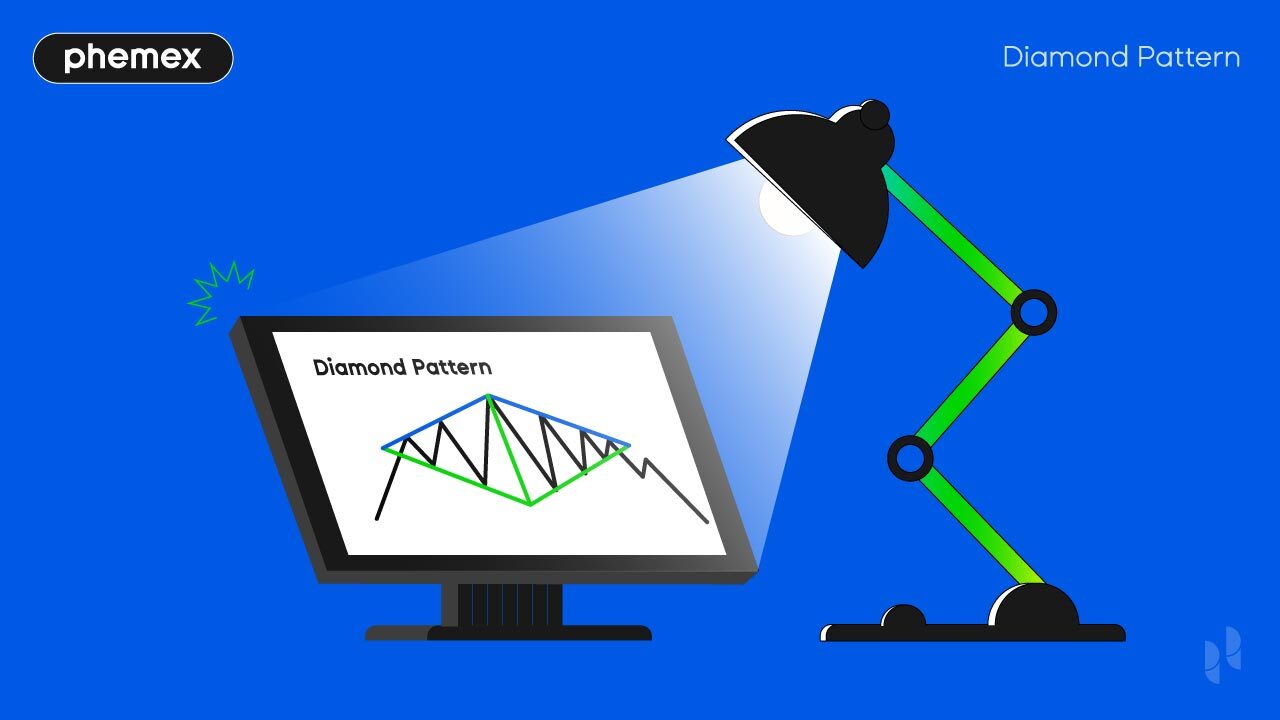 When analyzing a price chart, a trader must be aware of what they are looking for — otherwise they will simply be staring at candle sticks. What they are looking for are patterns that will indicate a breakout of a trend, a continuation, a reversal, or something else, as recognizing these early can mean great returns. These patterns are the starting point for any good technical analysis, showing the shifting supply and demand of an asset and indicating what might come next. Thus, as with supply and demand, these patterns can vary enormously. One pattern that is considered rare but able to yield great returns when spotted, is the diamond chart pattern.

What Is The Diamond Pattern?

Diamond patterns are chart patterns that are used for detecting reversals in an asset’s trending value, which when traded with properly can lead to great returns. These diamond reversal patterns can take long periods to complete, even years, but when correctly assessed, the trend reversals they indicate can be drastic and take less time to complete than the pattern itself. This means that if a trader locates a strong diamond pattern and knows how to trade with it, they can expect some great returns on their trade. 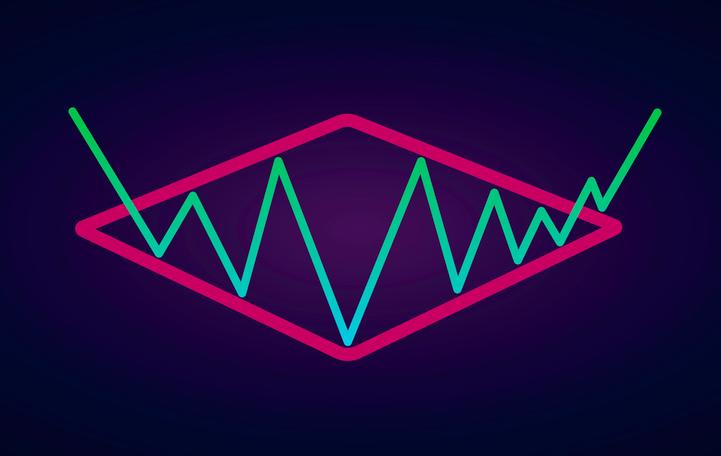 Diamond patterns can indicate reversals going in either direction, so a trader must familiarize themselves with how to trade in both directions:

However, spotting the diamond pattern can be difficult due to its rarity, which can mean that a trader will not be expecting it or will not be familiar with how it looks. Thus, when diamond pattern trading, the most important thing is to locate the pattern and not become confused and falsely identify one. 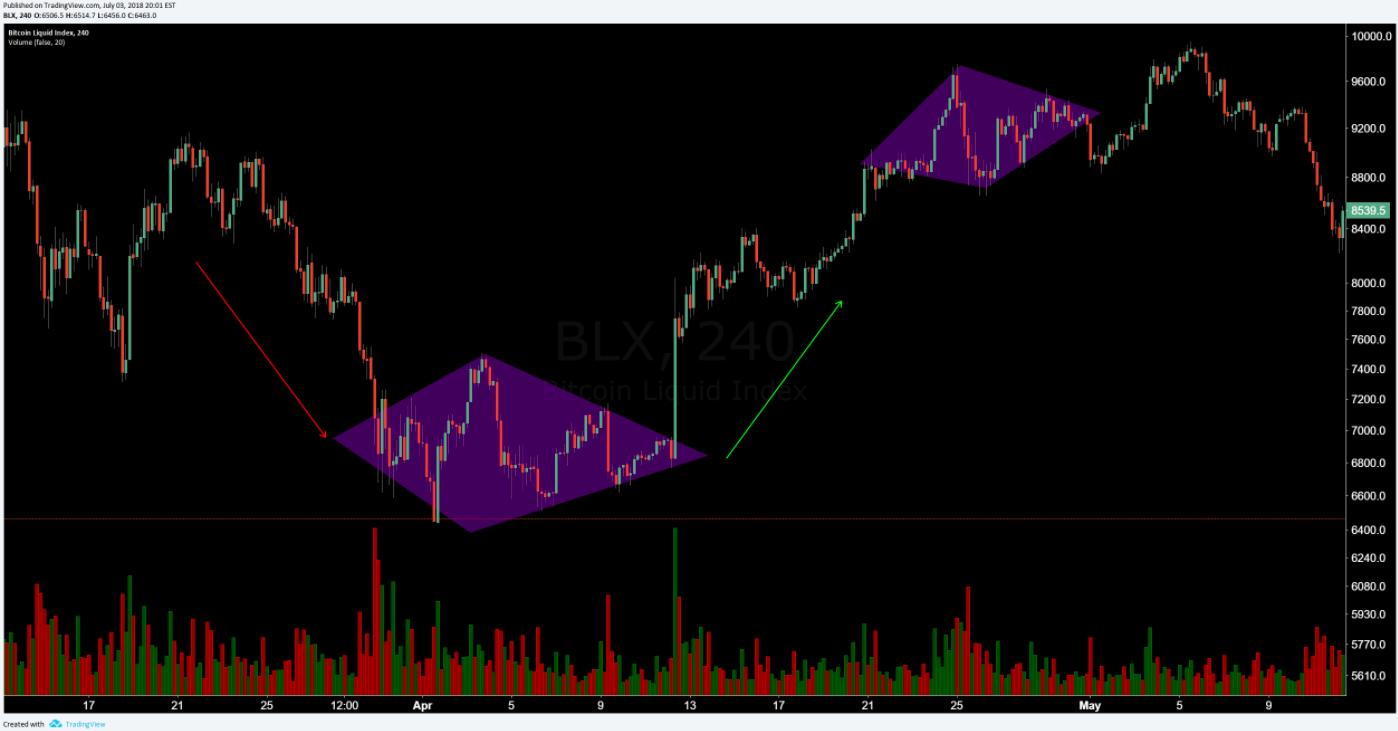 The diamond pattern looks similar to a head and shoulders pattern but with a V-shape neckline. It has four trend lines, consisting of two support lines and two resistance lines, which connect the highs and lows of the asset during the pattern’s period. These are important to note as they help establish when to enter a trade.

To create the diamond formation, the asset’s value waves on the chart must first widen/broaden between highs and lows (broadening triangle), and then become tighter/converge (symmetrical triangle). For the formation to be complete, it must also have a minimum of two touch points on each of the trend lines.

What Types of Diamond Patterns Exist?

As with most patterns that can be bearish or bullish, the diamond pattern also has two types — with both requiring familiarization if one is to go into diamond trading. These two types are the diamond top pattern and diamond bottom pattern: 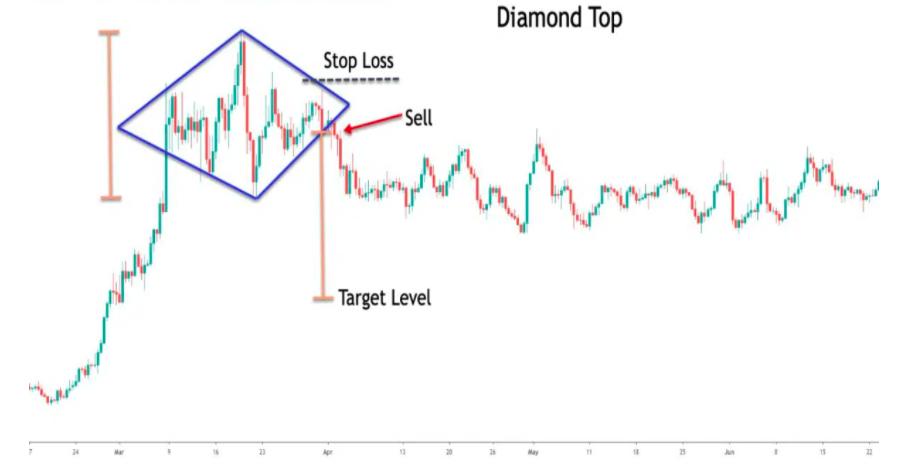 How To Trade With The Diamond Pattern 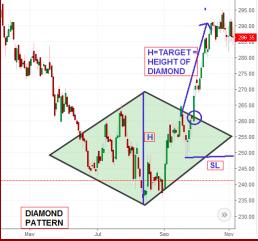 A graphic of where to place a stop loss (SL) order and how to calculate the target height of the breakout trend in a diamond bottom pattern. (Source: moneycontrol.com)

Diamond patterns are some of the best patterns to use in trading because of their good reliability for high returns. However, they are quite rare and should not be confused with the similarly shaped inverse head and shoulders or triple bottom patterns if a trader is looking to get the best out of them. Thus, it is important that a trader fully understand this pattern and its variants, as well as how to trade with them, before looking for them in the charts.

Diamond patterns offer better returns when used for long-term trading, meaning they are particularly good for crypto traders. Additionally, they are considered low risk trading patterns. This is because if a trader misses the breakout point, instead of entering at a point equal or similar in value to the diamond’s highest high or lowest low, then it is not problematic since it is after this point that the trend should truly gain momentum.

The combination of low risk and high reward make the diamond pattern a favorite among long-term traders, and despite its rarity, when it does appear its slightly uneven shape can make it easy to spot.