What is BakerySwap: A DEX and NFT Marketplace

BakerySwap is an automated market maker and non-fungible token (NFT) marketplace that runs on the Binance Smart Chain. It is powered by BakeryToken (BAKE), which trades at $6.35 and has a market cap of around $1.2 billion. This article will explain how BakerySwap works, its current place in the decentralized finance (DeFi) world, and its future outlook. Launched in September 2020, BakerySwap is primarily an automated market maker (AMM) and a decentralized exchange (DEX). An AMM is essentially an algorithm that provides liquidity to markets, similar to market makers in the stock market. A market maker’s primary role is to quote ask and sell prices for assets. This ensures that whenever someone wants to buy or sell an asset, there will always be a party on the other side of the trade.

In the case of AMMs for cryptocurrencies, liquidity pools are collectively provided by exchange users and traded through smart contracts. This allows users to easily exchange different paired tokens. In return for providing liquidity to these pools, users typically receive rewards from the fees collected by the AMM. Possibly the most prominent example of this model is Uniswap, which launched in 2018 and has been a leading platform in the DeFi movement. Decentralized apps, or DApps, provide decentralized and trustless versions of traditional financial services among other functionalities.

Ethereum currently powers some of the best-known DApps, but increasingly, DeFi platforms have been launched on other blockchains as well. BakerySwap bills itself as an improved version of Uniswap. It runs on the Binance Smart Chain (BSC), which has grown significantly in popularity due to its comparatively low transaction fees.

In BakerySwap, users who provide liquidity to a specific pool are rewarded with liquidity pool tokens (BLPs). They can then stake these pool-specific tokens to produce or “farm” BAKE tokens. BakerySwap charges a 0.30% fee on all trades. Of this, 0.25% goes to users providing liquidity and the remainder goes to holders of BAKE tokens.

Users can also stake BAKE tokens to earn more BAKE. They are free to contribute to any liquidity pool, most of which are “bakery” or “food” themed. For instance, in the “Toast” liquidity pool, a user can stake the ETH-BNB BLP to farm BAKE tokens. Certain pools offer higher rewards. For example, the BAKE-BNB pool (where BAKE tokens are traded for BNB tokens and vice versa) rewards liquidity providers with 10 times more BAKE tokens than standard pools. The BUSD-BNB pool offers three times the usual amount.

BakerySwap also provides the first marketplace for non-fungible tokens (NFTs) on the BSC, which it calls the Bakery NFT Supermarket. The marketplace allows users to bid on unique NFTs, after which the seller will choose the winning bid. Since most NFTs are sold via Ethereum, which has recently experienced very high transaction fees, BakerySwap’s NFT marketplace offers a lower barrier to entry.

Besides individual NFTs, the platform allows users to mint so-called “NFT Combos,” which require the user to lock up a certain amount of BAKE. These Combos greatly multiply the rewards that users can obtain from staking BAKE and providing liquidity to pools. The advantages offered by each Combo are unique and randomly generated, but also partly depend on how much BAKE the user stakes. There are four tiers of Combos, and the minimum amount to stake is 10,000 BAKE (worth nearly $60,000 USD at the time of writing). The highest tier can only be accessed by staking 100,000 BAKE or more.

In the future, BakerySwap intends to make Combos tradeable on the market so that users can sell rare and lucrative Combos that they mint. This introduces a significant element of gamification to the marketplace, incentivizing users to keep staking BAKE in the hopes of obtaining a rare Combo they can further profit from. At any time, a user can break down a combo they own to recover 90% of the BAKE tokens staked.

Finally, BakerySwap has a Launchpad page on their website, where they host new Initial Dex Offerings (IDOs). These are limited quantity launches of NFTs and/or currencies, often drawing on the gamified model first popularized by the 2017-2018 success of CryptoKitties on Ethereum. Most recently, BakerySwap has forayed into the dog-themed coin craze by launching 10,000 unique Crypto Doggy NFTs and an associated token, $DOGGY. This move is aimed to capitalize on the recent fervor for Dogecoin, Shiba Inu, and NFTs all at once.

Interestingly, BakerySwap’s features aren’t particularly original. Its main innovation is bringing together all of these features and functions into a single DeFi platform on the BSC.

Who Is Behind BakerySwap?

Unlike other DEX protocols (e.g., Uniswap), BakerySwap was founded by a group of anonymous developers. The developers receive approximately 1% of all BAKE tokens rewarded (or “farmed”) to users. With BAKE’s maximum supply, this implies a total share of around 2.77 million BAKE, worth about $17.6 million.

How Has BakerySwap Fared So Far?

BakerySwap had a bit of a rocky launch in September 2020, when the protocol failed only an hour after the launch. However, since then it has received lots of success. 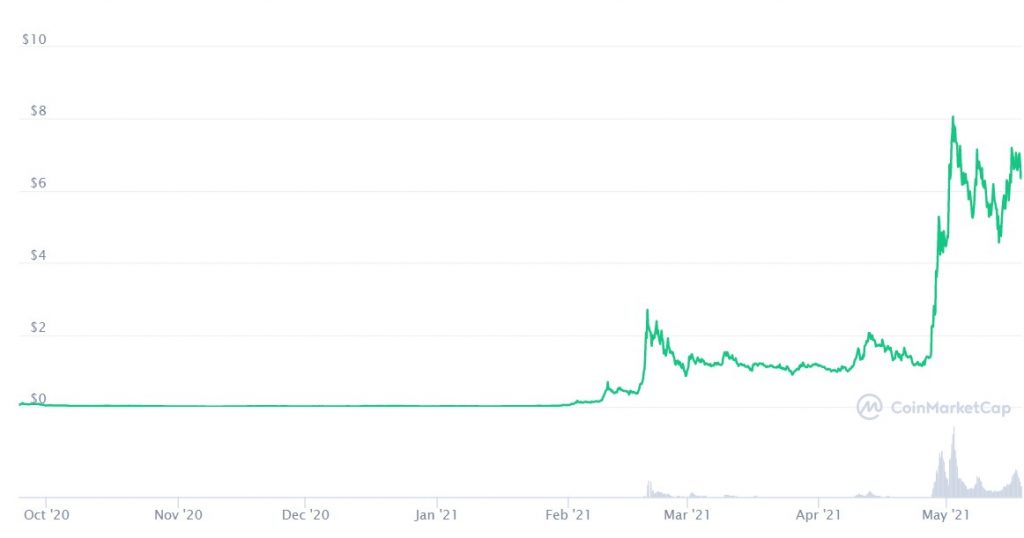 Bakeryswap has grown dramatically in recent months as a part of the BSC ecosystem, which has a competitive advantage thanks to its lower transaction fees than other DeFi blockchains (particularly Ethereum). At the start of 2021, the total liquidity provided on BakerySwap was around $1.2 million. Currently, that figure has grown to $486 million, an impressive gain in less than five months. For comparison, BakerySwap’s largest competitor on the BSC, PancakeSwap, has a total liquidity of around $2.8 billion.

BakerySwap’s sizeable growth is also illustrated by the BAKE token’s sudden rise. About three months ago, BAKE traded for around $0.38. Now, it trades for $6.35, constituting a 1571.05% increase. The BAKE token currently has a market cap of about $1.2 billion, with a circulating supply of around 188.7 million and a maximum supply of around 277.2 million.

What Is the Future for BakerySwap?

Since BakerySwap is still fairly new and untested compared to other DEXs, its general outlook is hard to speculate on. So far, it has seen very rapid growth and adoption. Its “all-in-one” approach to providing a DEX and a NFT marketplace in one place, combined with its user-friendly interface, could encourage further success and adoption in the future. However, there are other things to consider when evaluating how BakerySwap might evolve.

One factor to note is BakerySwap’s place within the BSC ecosystem. Some have argued that the BSC is much more centralized than other blockchains supporting DeFi. With just 21 validators, it may be more vulnerable to attack and influence by individual parties. As such, the BSC has been described as paradoxically constituting “centralized DeFi.” Despite these concerns, the BSC’s comparatively low transaction fees make it a lucrative option for users seeking an alternative to Ethereum, whose gas fees can surge during times of high demand — as seen in the current crypto bull market.

This context highlights that, to a considerable extent, BakerySwap’s fortunes are tied to the BSC’s. However, BSC rival Ethereum has two major upgrades planned for this year: the EIP 1559 upgrade in July 2021, which will overhaul transaction fees, and the switch to the proof-of-stake-based Ethereum 2.0 chain later in late 2021.

These highly-anticipated upgrades will likely mitigate Ethereum’s higher transaction fees. In this case, the BSC may become much less lucrative for DeFi users by reducing its competitive edge (notably, the BSC itself is essentially a modified fork of Ethereum).

BakerySwap also faces competition from other DEXs in the BSC ecosystem. The most successful DEX on the BSC is the similarly-named PancakeSwap. This platform has also benefited from BSC’s lower transaction fees, and has recently seen higher transaction volumes than Ethereum as a whole. Like BakerySwap, PancakeSwap also has gamified features, including collectibles and a lottery.

For BakerySwap to gain significant market share long-term, it may have to better differentiate itself from its competitors. Nonetheless, the platform’s dramatic growth in such a brief timespan suggests that BakerySwap could be poised for further growth and adoption in the short term.

BakerySwap’s success thus far reflects the general growing interest in DeFi, DEXs and NFTs. Its most distinctive characteristic is that it provides a platform that can serve the demand for cryptocurrency exchanges, NFTs, and passive income sources all in one place.

BakerySwap’s rise this year has also been tied to the wider flourishing of DeFi projects on the BSC. In such a rapidly-evolving ecosystem, it is difficult to reach firm conclusions about how BakerySwap might grow in the long term. The platform’s existence on the BSC with its associated lower transaction fees makes BakerySwap particularly appealing to everyday users. However, future developments of different low-fee blockchains with smart contracts may change this equation. BakerySwap’s competition for market share with BSC-based platforms such as PancakeSwap will also factor into its future. In any case, the platform’s rapid growth and unique attributes make BakerySwap a DeFi project to watch in 2021.