What is Head and Shoulders Pattern: Worst Case Scenario for Bitcoin 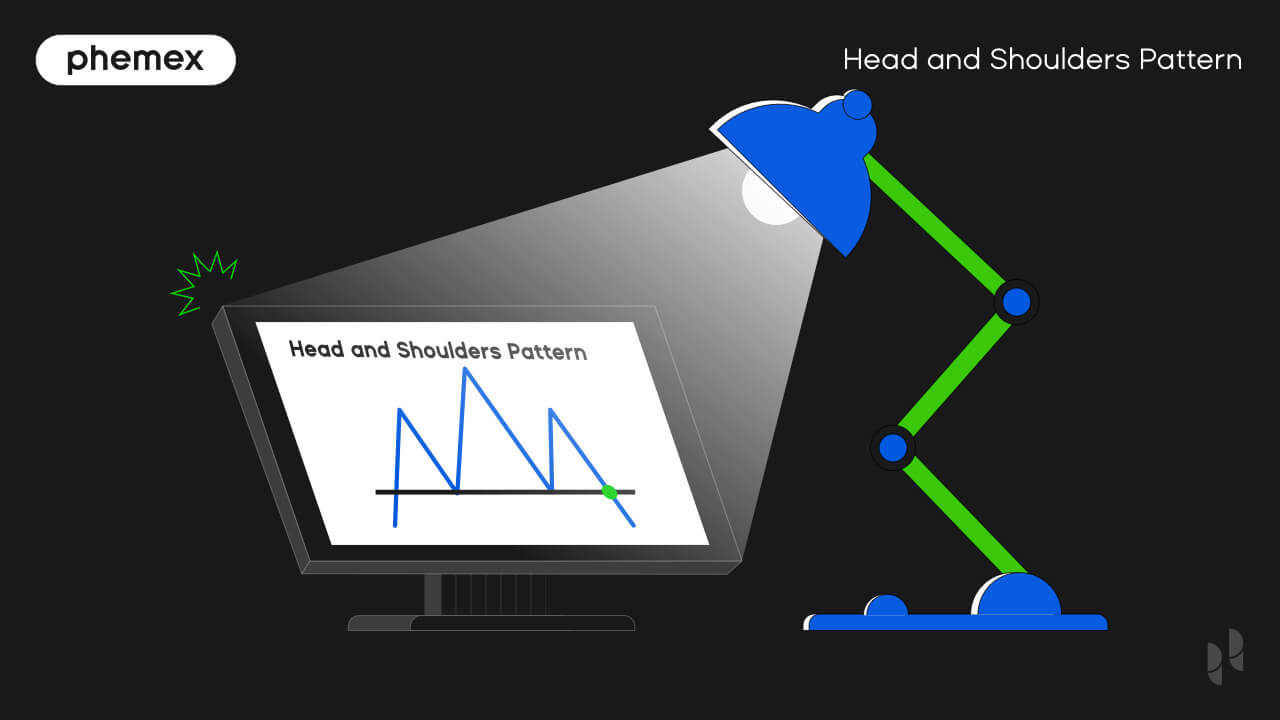 Identifying trends and good market timing are two essentials for successful trading. If a trader wants to short Bitcoin (BTC), but they’re unsure if they’re doing it at the right time, pattern recognition can help.

If the pattern is bearish and Bitcoin is going down, we can easily close a short trade at a profit. The key is identifying patterns that predict future price action.

The Head and Shoulders trading pattern is a favorite among more advanced traders. It is a trend reversal pattern that mostly identifies the start of bear markets. This pattern is quite rare and we have to know when it’s actually occurring and when it’s not.

This guide will give an overview of the Head and Shoulders chart pattern, how it looks and how to identify bearish/bullish reversals based on the pattern.

What Is A Head And Shoulders Pattern?

The head and shoulders pattern is a trend reversal pattern that forms after three highs. It usually takes a long time to form; traders often identify it on the daily chart.

If price appreciation (first shoulder) is followed by a higher high (the head) and then a lower high (the second shoulder), we can expect the final move to reverse to the downside.

Imagine the head and shoulders trading pattern as a real-life human: It would have one head and two shoulders. The neckline are the two lower highs connected together: 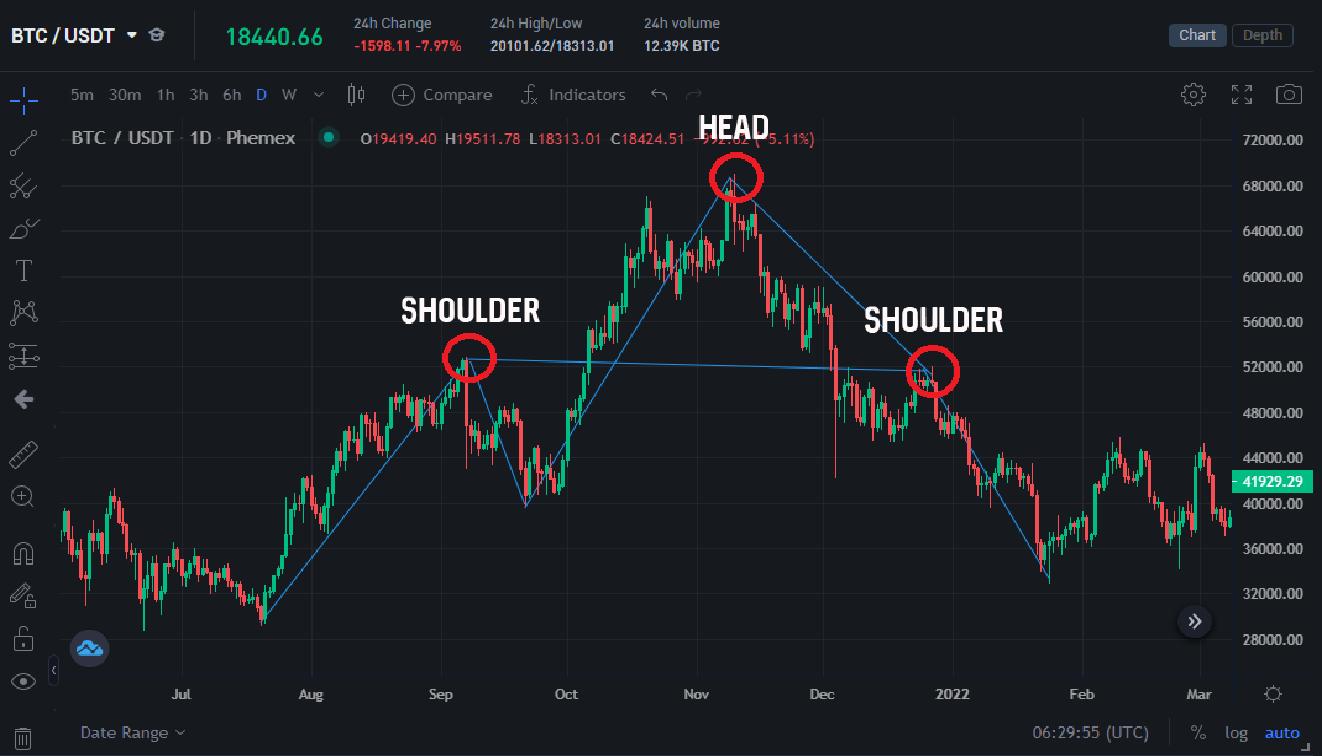 The Head and Shoulders pattern trading on Phemex chart.

On the chart, the candlesticks rose from the shoulder level to the head level and then collapsed. Bitcoin depreciated from $69,000 down to $36,000 and subsequently to sub-$20,000, as we now know.

Once a trader draws out a chart that resembles a human with two shoulder levels and a head, they can place a trade accordingly. If we notice that Bitcoin is forming a head and shoulder pattern, we can act on it with a short position.

Despite that, the pattern is not flawless and a Head and Shoulders pattern failure can occur in the crypto markets due to volatility. As such, it should not be read in isolation; traders need to account for market cycles as well.

What Are The Head And Shoulders Pattern Rules?

To identify the head and shoulders pattern, we must base our drawings on the following data:

If the price of Bitcoin peaked once (left shoulder), and was followed by another peak (head), and then collapsed down (right shoulder), we can expect the next move to be on the downside as demonstrated in the example above.

Traders can then enter a short trade at the formation of the second shoulder.

Is The Head And Shoulders Pattern Bullish Or Bearish?

The Head and Shoulders pattern is bearish unless inverted. If the pattern is inverted and we place the head at the bottom and the shoulders at the top, it can be used as a bullish indicator.

Therefore, a formation on the daily chart can signal the worst-case scenario for Bitcoin. If we draw out a head and shoulders trading pattern, we can prepare for a bear market.

The decrease in value and market cap in Bitcoin has a ripple effect on the crypto markets and altcoins; creating a bearish sentiment altogether.

These two peaks were followed by a second shoulder in April 2022 when Bitcoin started rising again, only to collapse in price and enter a bear market, plunging to price levels as low as $18,000.

When Does The Trade Signal Appear?

The “neckline” in the chart is used to produce the signal. A trader creates the neckline using a straight line that connects the lowest points on the chart.

By connecting the two lowest points, we can form a neckline and wait for the reversal to initiate. 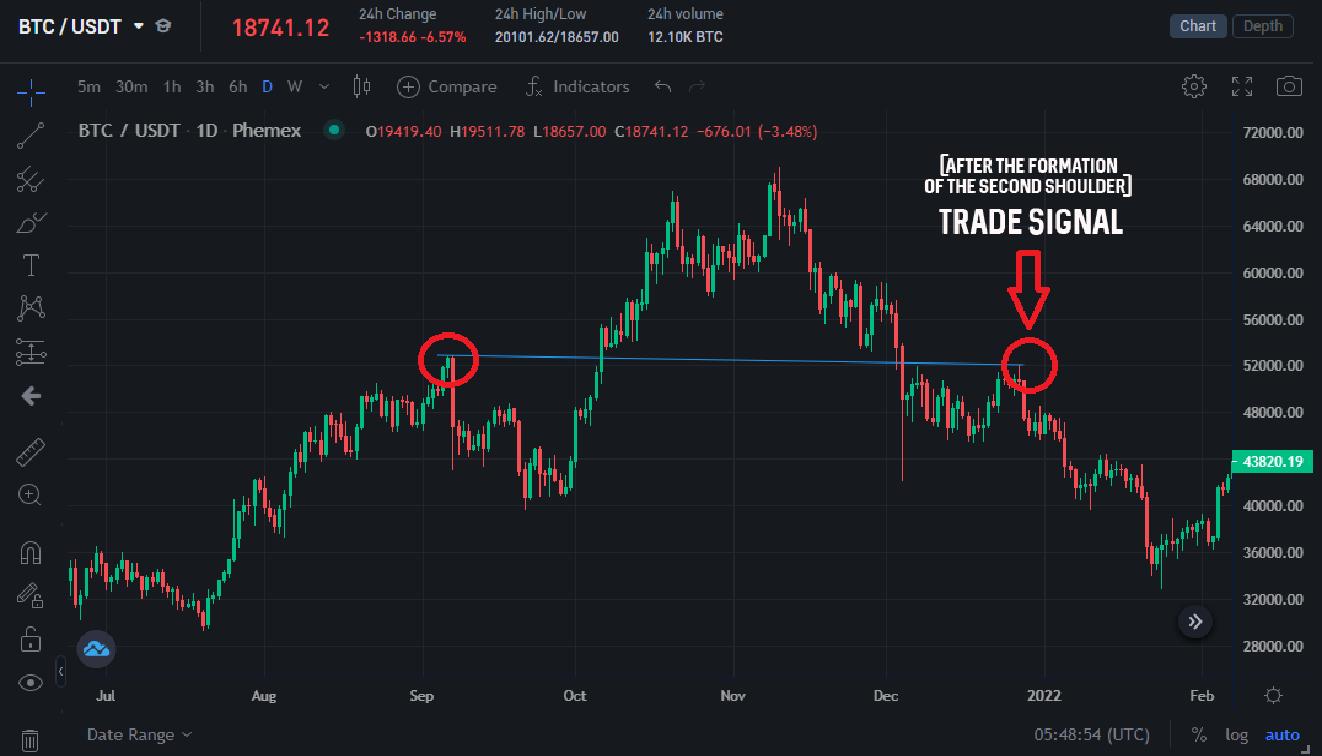 Let’s say the lowest point on our neckline is $52,000 and Bitcoin peaked twice above that price point – with two new highs.

Once the Bitcoin price crashes below $52,000 (the neckline) – this is a trade signal to short Bitcoin expecting further depreciation.

The neckline provides the confirmation signal. If we have a downward slope and this indicates bearish activity, the trend is more reliable.

What Is The Psychology Behind The Head & Shoulders Pattern?

The Head and Shoulders pattern is based on the psychology of the masses. If millions of traders are actively trading Bitcoin, they follow certain energetic cycles. While this pattern isn’t perfect, it has proven accurate on the daily chart for Bitcoin during the last bull run.

Theoretically, the following are the main reasons Head and shoulders is an effective indicator:

There is less aggressive buying and fear of missing out during the capitulation phase. This provides a better opportunity and entry price for accumulating during the bear market.

How to Draw the Head and Shoulders Pattern

For our Head and Shoulders pattern example, we’ll use the Phemex platform. The pattern is not always obvious because it takes a long time to form during trending markets.

If the price action is sideways with little volatility, we can’t predict or draw the pattern. The most recent bearish head and shoulders pattern materialized a few months ago.

Here’s how to draw it:

2) Pick any of the cryptos listed and hit “Trade” to the right to open up the chart:

Select among hundreds of crypto pairs on the Phemex platform.

3. Select the Trend Tool. For this demonstration, we’ll use the most-traded Bitcoin chart. Click on the “Trend Line” tool highlighted at the top-left: Use the ‘Trend’ tool to draw out complete patterns on the chart.

This tool allows you to draw directly over the chart by connecting point A to point B. The points can be deleted or interconnected.

Pro Tip: Use the 1D (daily) chart for maximum accuracy. The pattern might fail if we are using it on shorter-term charts.

4. Draw the Pattern. We start by drawing the first line that forms our left shoulder: The first rally on the pattern creates the left shoulder.

We then continue drawing until we reach the head and connect the head to the second shoulder:

To complete the pattern, we connect the first shoulder to the second shoulder using the neckline:

Enter the trade when the neckline between the two shoulders is completed.

This is the regular Head and Shoulders pattern. The trade signal was followed by a massive collapse in Bitcoin’s price, leading up to 70% in losses from the peak at the head level.

The bearish Head and Shoulders pattern signals a bear market for crypto if it forms on a long-term chart and showcases that the bull run is losing steam. The best Head and Shoulders entries and exits are when the neckline forms and when it starts to recover from the crash.

If we invert the pattern vertically, we can predict bullish momentum using the same pattern mechanics. To avoid failure using the pattern, make sure you take the time to wait for the full pattern formation prior to placing a trade.