It is hardly a secret that economists love graphs. Line graphs, pie graphs, and bar graphs, all of these are good tools to better describe and identify the trade movements that make up an economic shift or trend — and for that very reason, these tools are indispensable for any serious trader. Some shapes are so common in line graphs that they are designated their own name, working as functional reminders as to what these shapes indicate. Such is the case with the v-shaped recovery; one of the most common signals of an economic recovery. 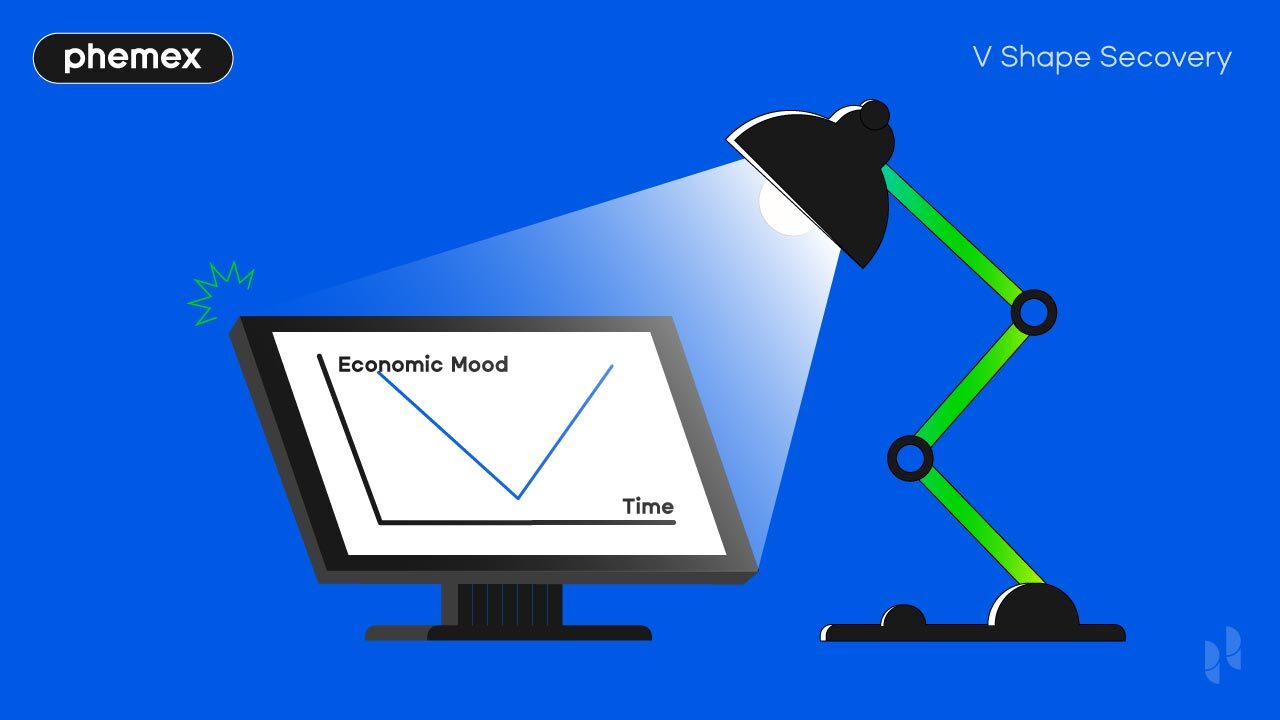 What Is the Definition of Recovery Economics?

The v-shaped recovery theory is only understandable within the context of recovery economics, and thus recessions and economic recovery. When a micro – or even macro economy enters a recession, it experiences a huge downshift in prosperity and activity, and consequentially income, employment, and sales plummet. While this can be financially crippling for those that have to endure such a spell, often the one positive the public can take from the situation is that it is virtually a mathematical certainty that this will only be temporary. Economies, historically, have a way of bouncing back in no uncertain fashion, and when they do it is rather predictably called an economic recovery.

These recoveries are the next stage of an economic cycle and generally occur right after a recession, with the time elapsing between these two periods often employed as one of the metrics to indicate the severity of that recession. Economic recoveries are characterized by an improving gross domestic product (GDP), rising incomes, and lowering unemployment rates — all of which help to contribute to a recovery, as well as being indicators of it. Usually, recoveries signify the real-world implementation of new policies and rules by governmental and/or central banking authorities. These polices are themselves usually a response to the (perceived) factors that triggered the economic recession in the first place. This is, however, conditional to the relevant authority’s ability to identify those factors.

Labor, capital goods, and other means of trade production pertaining to businesses that have collapsed during a recession are re-utilized and re-organized to fit in with the demands of the upturn brought about by economic recovery. In essence, an economic recovery is a process of resource allocation, which is necessitated by the growing demands of an expanding economy directly after that economy’s collapse. These recoveries almost invariably signify good things for an area and the people that live within it, and they come in many shapes and sizes.

What Is V-Shaped Recovery?

When measuring economic growth during a recession, there are various indicators that frequently appear on the charts, each with their own name and characteristic shape. One of the most recognizable and common of these shapes is the “V” indicator. This represents the mark left on an economic chart that attests to the decline and subsequent rise in market activity during and immediately following a recession.

V-shaped recoveries are generally indicative of a rapid and sustained rebound in economic fortunes following a period of economic hardship. They can occur in any level of commerce, from its lowest to its very highest forms, as almost no business operation is safe from the effects of a recession (or recovery, fortunately). This means that v-shaped economic recoveries have been seen on projected graphs by the owners of even the smallest of private businesses, right up to the operators of the largest of public enterprises. Wall Street brokerages and their likes are no exception to this rule.

What Are the Indicators Used to Predict a Stock Market V-Shaped Recovery?

A v-shaped recovery in trading is actually a common occurrence, at least on a small, individual scale. However, when a large-scale recession and recovery affects the market as a whole, it affects a large quantity of the enterprises which operate within that market. One of the main indicators that allow investors to predict whether the stock market is likely to enter a recession, and recover from that recession, are the book equity to market equity (BE/ME) ratings of different enterprises. To better understand book equity and market equity, also known as book value and market value, a brief definitions section is given below:

Stocks with relatively high BE/ME ratios (known as value stocks) generally belong to large, established companies considered to be too large or integral to fail (at least outright). Following on from this, stocks with a relatively low BE/ME ratio (known as growth stocks) often belong to newer and smaller, but also faster growing, companies without a large quantity of tangible assets or much dividend history. During hard times or economic instability, value companies tend to perform worse than growth companies, largely due to them having a much higher quantity of assets tied up in the market at any given time. However, these value companies are also far more likely to see an inflated increase in value during a period of v-shaped economic recovery. There have in fact been many examples of these forms of recovery throughout modern history.

What Are Some Historical Examples of V-Shaped Recovery?

As mentioned, there has been a high number of v-shaped recoveries throughout history. Two of the most famous v-shaped recoveries in US history are a pair of major recessions and bounce-backs that occurred within just over thirty years of each other: 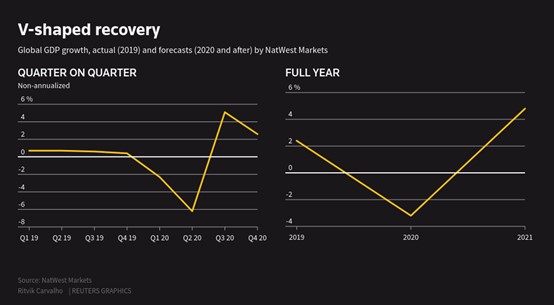 What Are Some Modern Examples of V-Shaped Recovery?

To conclude, it is probably worth mentioning that the economy is currently in what many are predicting will be a v-shaped recovery, following the recession brought on by the COVID-19 pandemic. Travel restrictions, shuttered non-essential businesses, and social distancing policies have all played their part in making the available economic money pool much shallower than it has been in previous years. However, it is hoped that measures taken by the US and other national governmental bodies will allow this period to be a short one, as the second half (“/”) of the v-shape is becoming increasingly clear. It certainly seems likely that 2021-22 will represent another historical recovery for the economy. The final shape of that recovery, however, is yet to be determined.