What is MANA Decentraland: The Next Generation of Virtual Worlds 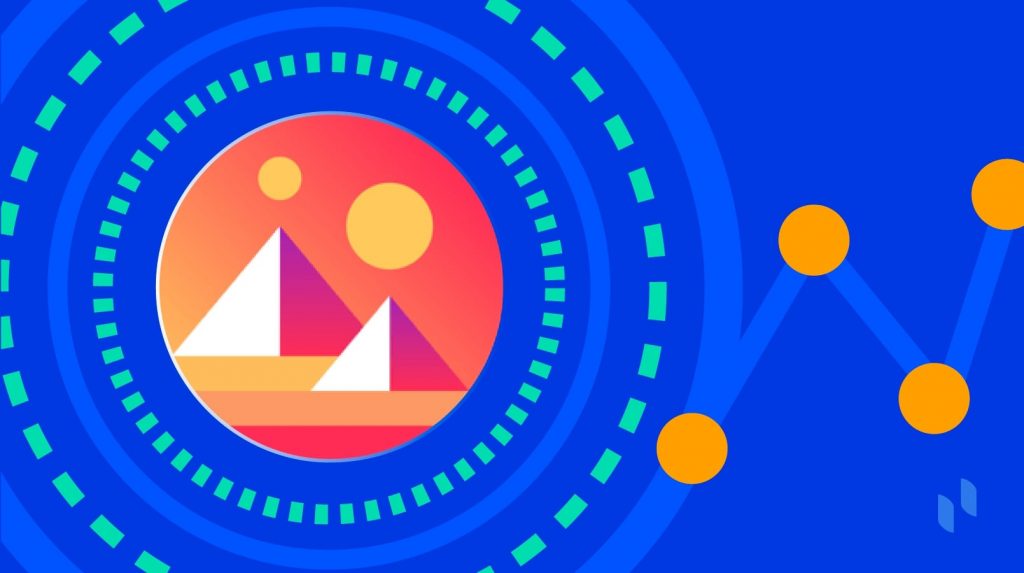 The idea of the virtual world is nothing new. One of the first successful applications of the concept, Second Life, was released by American developer Linden Lab in 2003. The metaverse attracted much attention for its innovative approach to virtual assets and property. In 2013, Linden Lab revealed that users had generated over $3.2 billion in transactions since Second Life’s release.

Decentraland aims to take this concept to a new level with blockchain technology. Built onto the Ethereum (ETH) network, Decentraland lets users create, experience, and monetize a variety of content and applications on virtual plots of land. All that’s required is a modern browser with an integrated wallet such as Metamask. Much like older metaverses, Decentraland is built on the idea of creativity and powered by an entirely user-oriented economy. The Decentraland platform is built around two tokens:

You can now trade MANA on Phemex!

What Is Decentraland Used For?

Much like its predecessors, Decentraland is largely driven by content creation. In addition to building their own ideal lakefront cottage or castle, users can design areas of business just like in the real world. Brands may also purchase land in high-traffic areas to design billboards or other high-profile advertisements, much like in New York City’s Times Square.

An example of a business operating on Decentraland is Tominoya Casino, which has made its proprietors over a million dollars in MANA since the beginning of 2021. The Casino recently made the news for hiring roughly 20 employees to staff its location in an effort to get an edge in interactivity over competitors’ non-player characters (NPCs).

Parcels can be grouped into areas called “districts” by community vote. Districts typically revolve around a theme, and attract traffic according to user interest. For example, the “Crypto Valley” district houses LAND owned by various crypto companies.

In March, veteran gaming company Atari announced that they would license a crypto casino in the “Vegas City” district over a two-year period. The casino is to feature Atari-branded games and offer users the chance to play for MANA, DAI, and Atari Tokens.

The platform’s LAND market resembles the physical real estate market in many ways. Most notably, virtual plots in high-traffic areas are especially sought after, and the total amount of land is finite. These factors have led to significant price speculation.

According to Decentraland, over $50 million in transactions have been carried out on the platform, most of which were LAND purchases. On  April 11, a plot of LAND was sold for over $572,000. The platform even includes a decentralized finance (DeFi) integration that lets users apply for LAND mortgages through the Ripio Credit Network (RCN) smart contact system.

The rich virtual world on the Decentraland platform also offers novel social experiences that are far more engaging than more traditional forums or social media models. Much like in older virtual worlds, tight-knit communities oflike-mindedd individuals may eventually emerge to take advantage of the digital space.

Decentraland has been promoting community growth by allowing users to host world events. These can range from music festivals held by real-world artists to grand openings of on-platform businesses, such as the Atari Casino.

Who Is Behind Decentraland?

The Decentraland project was co-founded in 2017 by Ariel Meilich and Esteban Ordano, who served as project lead and tech lead respectively. Though both have since stepped down from leadership positions, they still serve Decentraland as advisors.

The project is currently governed by the Decentraland DAO, which owns most of the key contracts and assets that make up the platform. The DAO also maintains a significant reserve of MANA to subsidize platform operations and development initiatives. MANA holders can vote on a variety of proposals that affect the platform simply by connecting their wallet. Proposals can include areas such as LAND, marketplace, and builder policies, along with the whitelisting and blacklisting of NFT contracts.

The price of MANA has risen steadily over the year, and recently hit its all-time high just a few days ago on April 21. The token went from $0.18 on January 24 to $1.19 on April 24, representing an increase of roughly 558% over 3 months. The token’s price has experienced some volatility over April, though it has continued to rise at a slower rate of 25%. 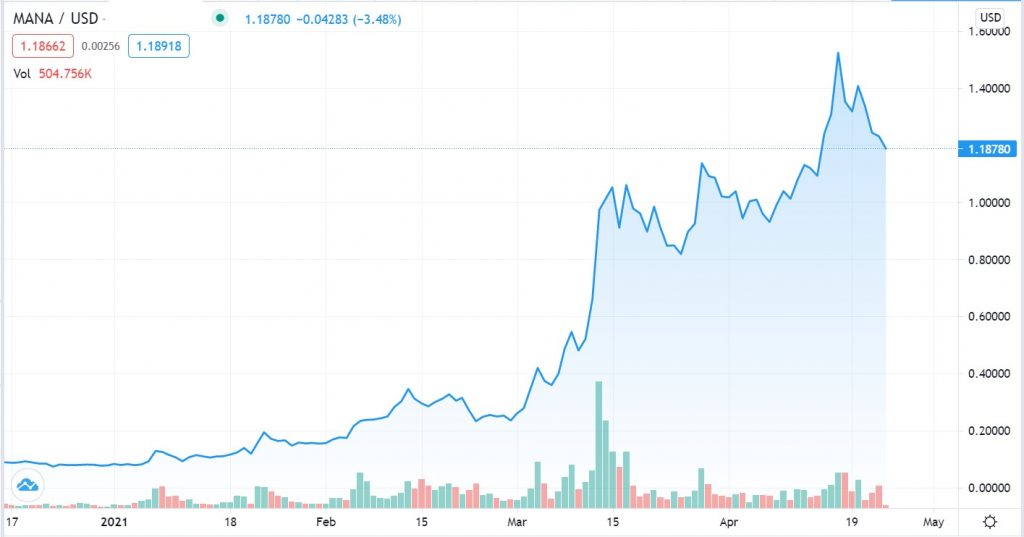 The price surge is likely a result of increased interest in NFT applications. Most other NFT tokens are used to tokenize virtual assets on other platforms, such as Enjin Coin (ENJ) and video games. MANA is unique in that it powers creation on the Decentraland platform itself. A popular use of LAND parcels has been to create NFT galleries, which means the platform benefits even when other tokens are used to create gallery assets.

MANA is currently ranked #69 by market cap. While the original total supply of MANA was 2.8 billion, over 600 million has been burned through LAND auctions and marketplace transaction fees. At the time of this writing, the total supply is around 2.19 million. MANA was initially designed with an inflation mechanism, though this feature has since been disabled with no stated plans for reinstatement.

Of the total MANA created during launch, 40% wassold during the token’s ICO in 2017. Of the remaining share, 20% was reserved for community incentives, 20% was issued as rewards to the development team and other early contributors, and the remaining 20% was set aside for the Decentraland DAO.

Of note is that Decentraland held one of the fastest ICOs in history, selling out in just 35 seconds to a small base of large-scale investors. More recently in March, MANA was added to Grayscale’s investment roster, along with other promising tokens such as Chainlink (LINK) and Filecoin (FIL).

What Is the Future for Decentraland?

Virtual worlds have long captured the public imagination. Blockchain technologies and decentralized architecture have actualized possibilities that previous generations could never have dreamed of. The challenge for Decentraland lies not in creating specific applications, but rather in cultivating a community and giving its members the tools to realize their own creations.

The platform has already proven that there is plenty of room for monetization. In addition to virtual casinos and real estate investment, the platform has given birth to a young ecosystem of designer services. An example is “architects”, users that are paid by LAND owners to build unique assets on their virtual properties.

Another key area of concern for Decentraland is scalability. As the Ethereum network experiences more and more pressure from increased adoption, Decentraland users have been forced to pay higher gas fees to ensure successful transactions. As a significant portion of the platform’s marketplace relies on microtransactions, this state of affairs is not sustainable.

In an effort to resolve this issue, Decentraland has been moving to integrate the platform’s DApps with Polygon (previously the Matic Network). The Decentraland team projects that by May, users will be able to claim, buy, sell, and trade wearables on the Polygon sidechain without having to pay transaction fees.

While much of its technology is new, Decentraland is based on a concept that’s been around for decades. There is a proven demand for the freedom offered by virtual worlds, and the unique experiences that users can build for themselves.

One key area differentiating Decentraland from its predecessors is scale. Spurred by media attention and exchange listings, the platform has experienced a renaissance of growth.

As new users enter the fray, the project’s team needs to ensure that Decentraland can offer a core experience beyond the market speculation that currently surrounds the platform. Those looking to invest in LAND should exercise proper precautions — investing in virtual real estate carries many of the same risks as it does in the physical world.