What is Loopring (LRC): A Layer 2 Creating Faster and Cheaper DEX

Ethereum (ETH) is one of the most successful projects in crypto; but despite this success, Ethereum has been plagued by issues surrounding network congestion such as high gas fees, low scalability, and slow transaction speeds. Many layer 1 networks such as Solana (SOL) and Avalanche (AVAX)  have sought to address these issues by creating new and improved networks that directly compete with Ethereum. Layer 2 projects on the other hand, aim to address these issues by building applications and systems on top of Ethereum that can alleviate the problems the network faces. One such layer 2 project is Loopring, which offers Decentralized Exchanges (DEXs) and DeFi payment systems the ability to build on Ethereum while avoiding the major congestion issues of the network. Loopring is currently trading at $0.90, has a circulating supply of 1.3B, and a market cap of $1.2 billion. 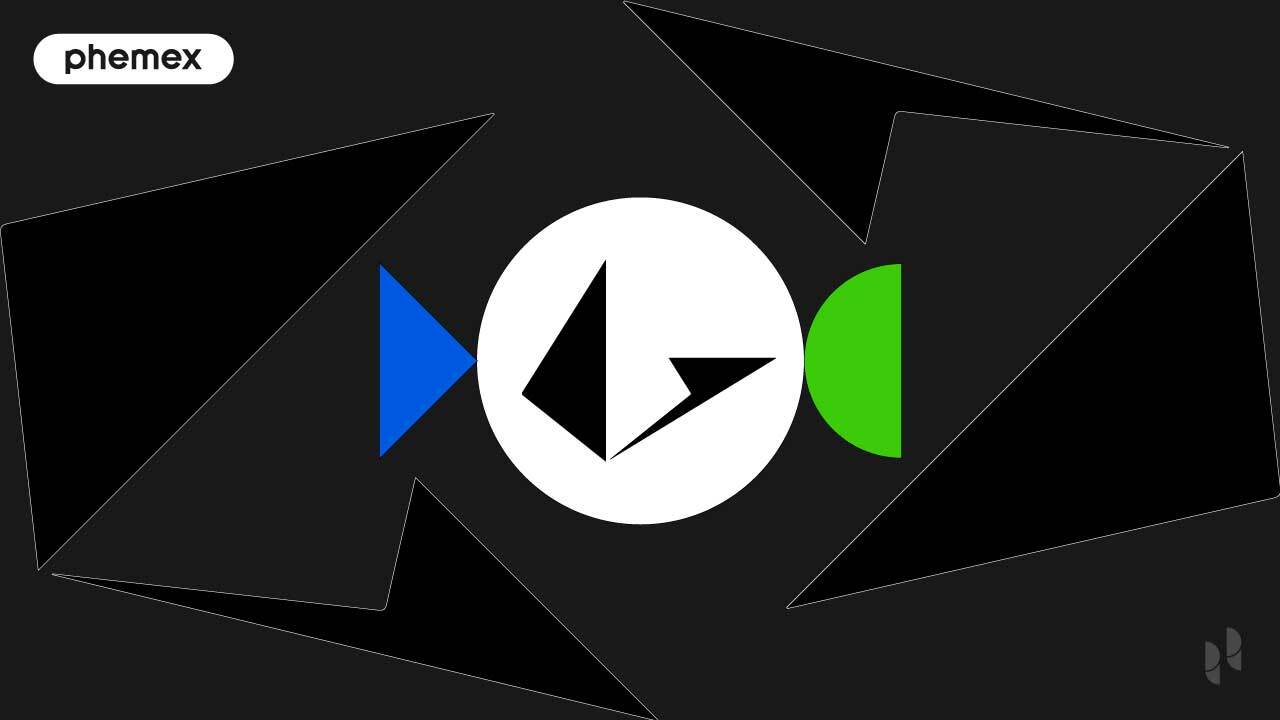 Looping is a layer 2 cryptocurrency that can be deployed on top of Ethereum. Loopring provides a modular protocol that DEXs and other applications can be built on. By employing zkRollup technology, Loopring is able to build exchanges that do not suffer from the same gas fees, scaling, and transaction issues that the Ethereum network faces. Loopring can reach throughput levels of 1000 times greater than Ethereum while offering fees at a fraction of the price.

How Does Loopring Work?

The key to Loopring’s ability to offer cheaper fees and faster speeds is their usage of Zero-Knowledge Rollups (zkRollups). zkRollups allow Loopring to complete computations off-chain, not on Ethereum, and then later bundle hundreds of transactions together into one single transaction that is submitted to the Ethereum network. These transactions are then settled directly on Ethereum’s network, where Zero-Knowledge Proofs are used to confirm whether the off-chain transactions were accurate.

Zero-Knowledge Proofs are a complicated form of cryptography; however, the simple explanation is that they allow the network to confirm the validity of transactions without ever having to reveal any sensitive details. For example, if a user sends a friend 1000 dollars over Ethereum, Zero-Knowledge Proofs can validate that the user did indeed send 1000 dollars without ever having to reveal any details surrounding the sender, the amount sent, or the recipient of the money. By not revealing information, Zero-Knowledge Proofs can maintain strict security while also minimizing the computational power needed. 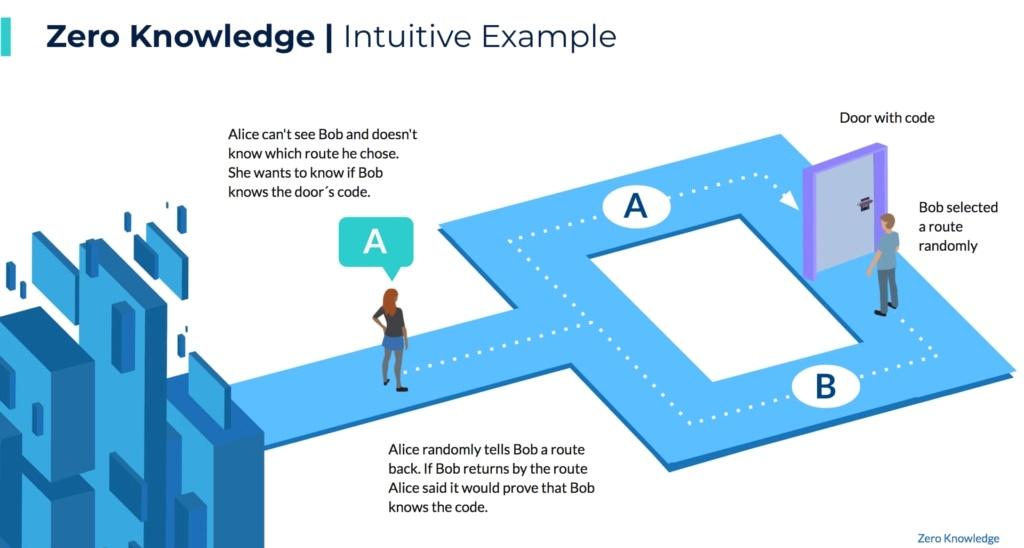 Although Loopring does not suffer from the same high gas fees as other Ethereum based projects, Loopring does nonetheless have some fees that users must pay. These transaction fees must be paid in Loopring’s native currency LRC. These fees differ from gas fees in that they’re cheaper and set at a fixed percentage that does not change based on network usage levels. After Loopring collects these fees, 80% of the LRC collected is distributed to liquidity providers, 10% to insurers, and 10% to the Loopring DAO. The Loopring DAO has autonomy over how to use the fees they have collected. The DAO can buy back tokens, burn tokens, provide grants, and more.

The purpose of this fee ecosystem is to support and strengthen the Loopring network by rewarding the stakeholders who contribute and do work within the network. 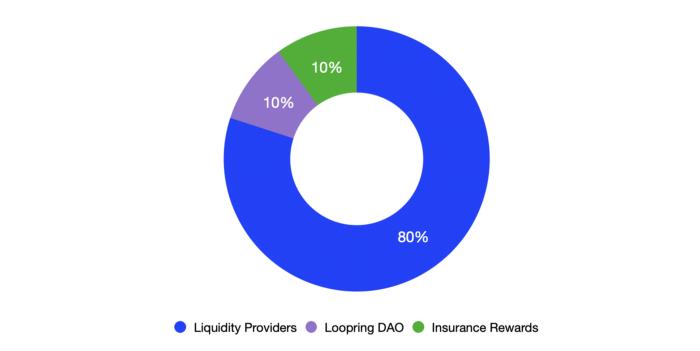 The Loopring Layer 2 App is a DEX built on Ethereum and Loopring’s zkRollup protocol. Loopring’s DEX bridges the benefits of a DEX with the security of Ethereum’s network and the cheapness and speed of the loopring protocol. The Loopring Layer 2 App also serves as a decentralized payment system that allows users to send ERC-20 and ETH tokens securely and cheaply from one wallet to another. 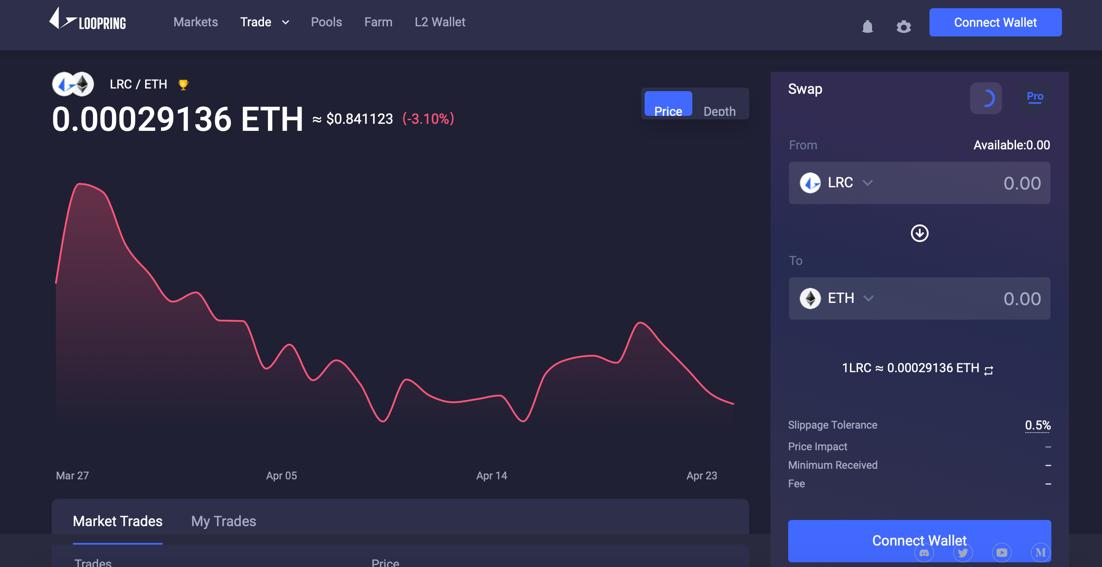 Loopring’s Wallet is built with zkRollup technology and allows the wallet to provide secure and gas-fee free transactions. However, the most unique aspect of the Loopring Wallet is its usage of social recovery rather than seed phrases. This means that if a user loses access to their wallet (such as losing the phone the wallet is stored on), rather than having to use a list of seed phrases to recover their wallet – like most traditional wallets – they can instead use a system of social recovery. When setting up their wallet, the user will assign certain individuals (such as trusted friends or family or even an AI computer system) to act as “guardians”. When the user loses their wallet, they simply request these “guardians” to authorize the recovery, and if 51% of the guardians approve, the user can regain access to their wallet. This system in theory can be more secure than seed-based recovery, as a list of seed phrases can be lost, stolen, hacked or forgotten. That being said, social recovery still has its own set of risks that users must keep in mind.

Who Is Behind Loopring?

Loopring was founded by Daniel Wang in 2017. Daniel Wang attended the University of Science and Technology of China where he studied Computer Science. Daniel later attended Arizona State University where he earned his Master of Business Administration. Before creating Loopring, Daniel worked as a Senior Software Engineer for Google in addition to several Chinese based tech companies. This year, Daniel stepped down as CEO and has been replaced by Steven Guo, Loopring’s former CTO. Steven Guo graduated from the University of Science and Technology of China with a PhD in computer science in 2005. Afterwards, Steven worked for Intel as a software engineer and tech lead, before later moving to Cheetah Mobile as a Senior Director of Engineering. In 2018, Steve founded the blockchain company Dora Network, which focused on developing Zero-Knowledge Proof computation. Steve then joined Loopring as CTO where he and his team from Dora Network worked to build Loopring’s first zkRollup system.

In 2017, Loopring conducted an Initial Coin Offering (ICO) and raised 120,000 Ether (45 million USD at the time). However, due to changing regulations within China, Loopring was forced to later refund around 80% of the funds raised. Loopring has since received funding from various venture capital firms such as G2H2 Capital, NEO, Fundamental Labs, and Obsidian Capital.

For much of 2018, 2019, and 2020, Loopring traded flat and did not see much price growth. In late 2021, Loopring skyrocketed over 700% in price and set an All-Time-High of $3.83. This meteoric rise was largely driven by Loopring’s partnership with GameStop (GME). Loopring partnered with GameStop to build the company’s decentralized NFT exchange. This partnership provided Loopring with vast amounts of exposure and allowed Loopring to receive the financial and social support of GameStop’s large and dedicated contingent of investors. Beyond the GameStop partnership, Loopring’s meteoric rise can also be attributed to the growing hype surrounding layer 2 cryptocurrencies.

Since setting its ATH, Loopring has seen a substantial 76% decrease in price and is currently trading at $0.90. This drop has largely followed the broader crypto crash that saw many market leaders like Bitcoin (BTC) drop over 40%. 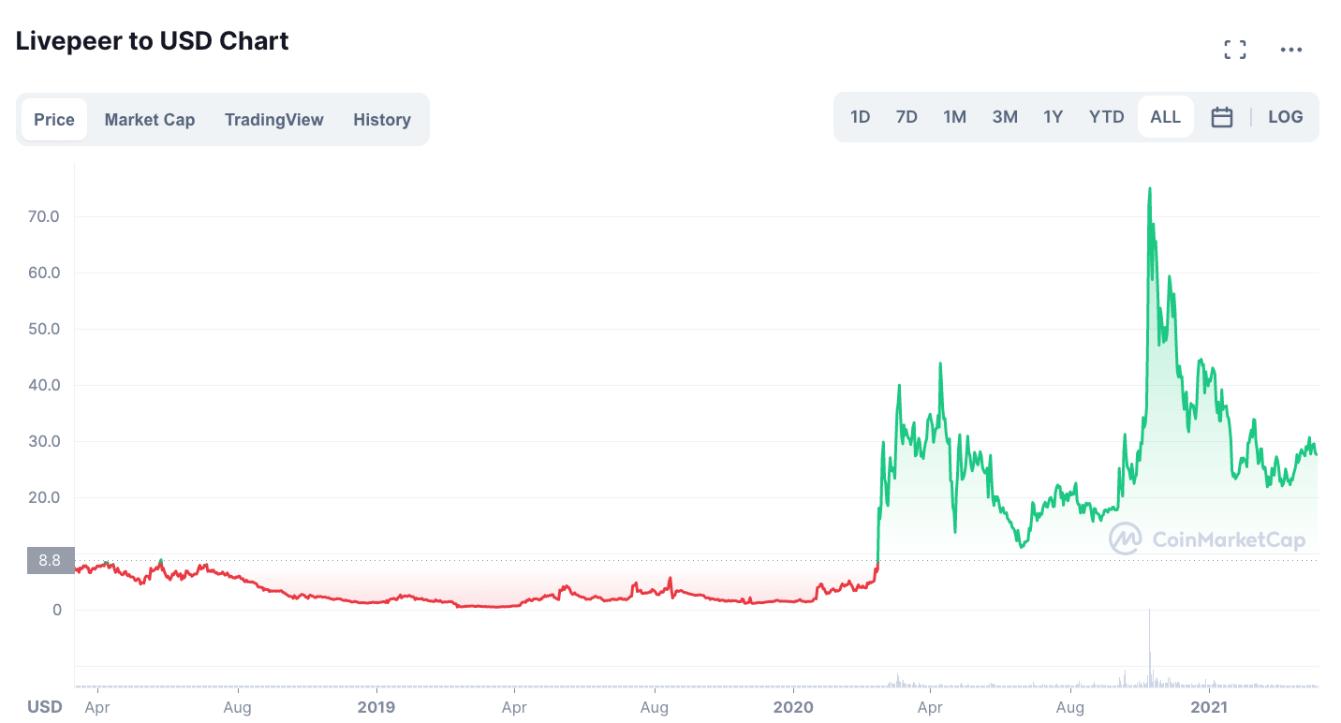 What is the Future of Loopring?

One major factor that will influence Loopring’s future success is whether there remains a need for their product. The entire premise of Loopring is to offer a system that improves upon the issues of Ethereum. However, with Ethereum’s upcoming update to Ethereum 2.0, and the expected improvements in speed, fees, and scalability, the question becomes whether there will still be any major incentive for users to build on Loopring instead of directly on Ethereum. Furthermore, the proliferation of various Layer 1 networks like Avalanche, Solana, and Hedera (HBAR), also creates an issue for Loopring, as it may incentivize users to build their platforms on other networks rather than Ethereum and Loopring. It remains to be seen how these factors will affect Loopring’s success.

Roadmap for the Future

Loopring has several major plans for 2022 and beyond. Now that their zkRollup technology has been built and optimized, Loopring’s new priority is to increase adoption and awareness of zkRollup and its benefits. They hope to do this by building more projects and products on their Loopring protocol.

Loopring is also hoping to add several functions to their existing products and exchanges. They are planning on adding a fiat off-ramp which will allow users to exchange crypto for fiat currency. Additionally, they are hoping to integrate yield farming into their exchanges to allow users to earn interest on their crypto.

Loopring has already entered the NFT and Metaverse space through the launch of their NFT collection and the development of their Loopring HQ in Decentraland. That being said, they are hoping to further improve these initiatives by expanding their Decentraland HQ and launching more NFT collections and wearables. 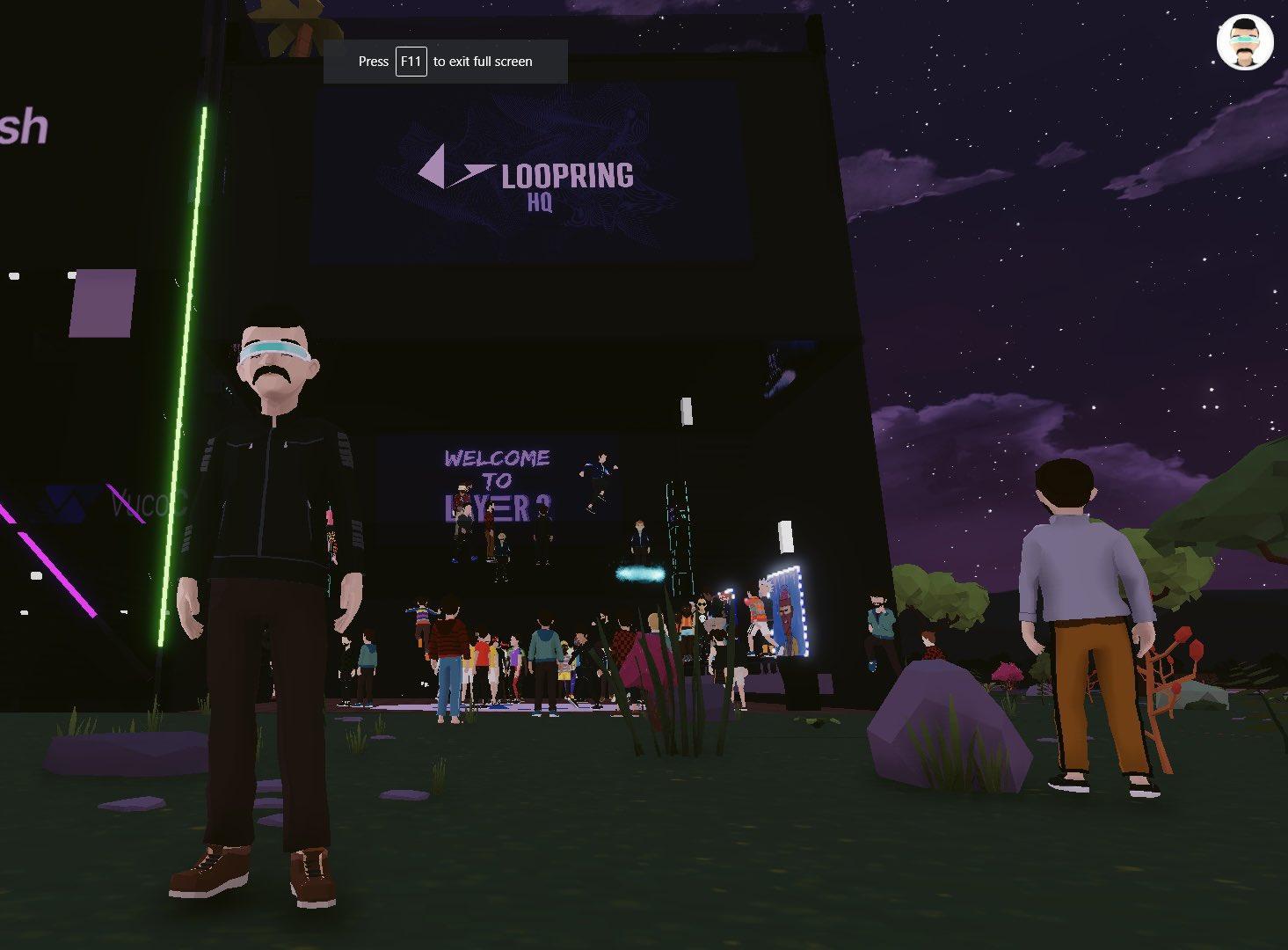 Lastly, a major project to keep an eye on in 2022 is the full launch of the Loopring and GameStop partnership. The beta version of the GameStop NFT marketplace is already live; however, the fully functional version will not be live until later this year. This will be a large development that will help generate further publicity for Loopring and likely lead to further integration of Loopring into mainstream corporations.

How to Buy LRC on Phemex?

Phemex offers both spot and contract trading for investors to choose from. However, for beginning crypto buyers, spot trading is recommended. To buy LRC on Phemex, follow the instructions below.

1 The first step to buying cryptocurrency on Phemex is to go to the Phemex homepage, register for an account, and select Markets.

2 On the Markets tab enter LRC into the search bar on the top right, immediately after, the LRC/USDT trading pair will appear below – select Trade to move on to the next step.

3 You will then be redirected to the Phemex trading platform for the LRC/USDT pair. To do a simple spot trade we recommend doing a market order where you can buy LRC at the market price. To do so, select Market, enter the amount of USDT you want to buy of LRC, and click Buy LRC.

Loopring is a Layer 2 project that aims to create a cheaper, faster and more efficient process for DEX and DeFi platforms built on Ethereum. Loopring does this through its zkRollup protocol. Loopring also operates its own DEX and smart wallet. Loopring’s future is uncertain; however, they have strong future plans and will likely continue growing in the upcoming years.