What is Chande Kroll Stop: Stop-Loss and Take-Profit Strategy

The Chande Kroll Stop indicator provides insight in real-time based on the market volatility. It helps traders adjust their trading position when it’s open. For example, if a trader has a short position on Bitcoin while the price is below the two lines, they can close their short preemptively. It serves as a confirmation tool that the price is moving in the right direction. What is Chande Kroll Stop?

The Chande Kroll Stop is an indicator that calculates average stop-loss and take-profit prices for Bitcoin (BTC), Ethereum (ETH), and other altcoins. The indicator can be used on the 1M, 1W, 1D, 6H, and short-term charts. It uses two lines: Red and green to signify the average stop-loss and take-profit limits. Chande Kroll Stop belongs to the category of trend following indicators.

The name is derived from protective tools that traders use in the markets such as stop-losses. The indicator helps traders position their long and short trades according to barriers. If a trader wants to open a long position, he can use the indicator to go long when the price falls below the two lines. Conversely, they can short when the price rises above the two lines.

The Chande Kroll Stop indicator was invented by two Canadian bankers: Tushar Chande and Stanely Kroll. The indicator name is derived from their last names, Chande and Kroll. They first introduced the indicator in the book “The New Technical Trader – Boost Your Profit by Plugging into the Latest Indicators” in 1994.

Both Chande and Kroll are veterans in the banking industry and they also introduced popular indicators such as StochRSI, Chande Momentum Oscillator, Aroon, and VIDYA. Their book was a best-seller and changed the world of trading.

Chande and Kroll indicators were battle-tested for over 30 years in the traditional markets. Their indicators were designed to work across the board in stock, forex, commodities, and recently crypto markets.

The Chande Kroll Stop formula calculates stops for high points and low points. These correlate to average stop losses and take profits for most trades on Bitcoin:

Traders don’t need the formula to use the indicator. They also don’t need to know how to calculate Chande Kroll Stop, but they have 3 optional variables that they can adjust: P, X, Q.

Average True Range is presented as “P” on Phemex and it signals the average level for stop losses based on volatility. The default parameter is “10” which means it will measure for 10 days on the daily chart, 10 weeks on the weekly chart, etc.

The “X” signifies average time, and it’s set at 1 by default to signal one day. The “Q” variable separates the lines from the price. The Q variable is set at 9 by default, making it 9 times greater than the volatility.

How to Use The Chande Kroll Stop

Let’s use Phemex trading platform for this demonstration. Chande Kroll Stop is available on 50+ spot market and futures market pairs. Start by choosing a trading pair such as BTC/USDT: 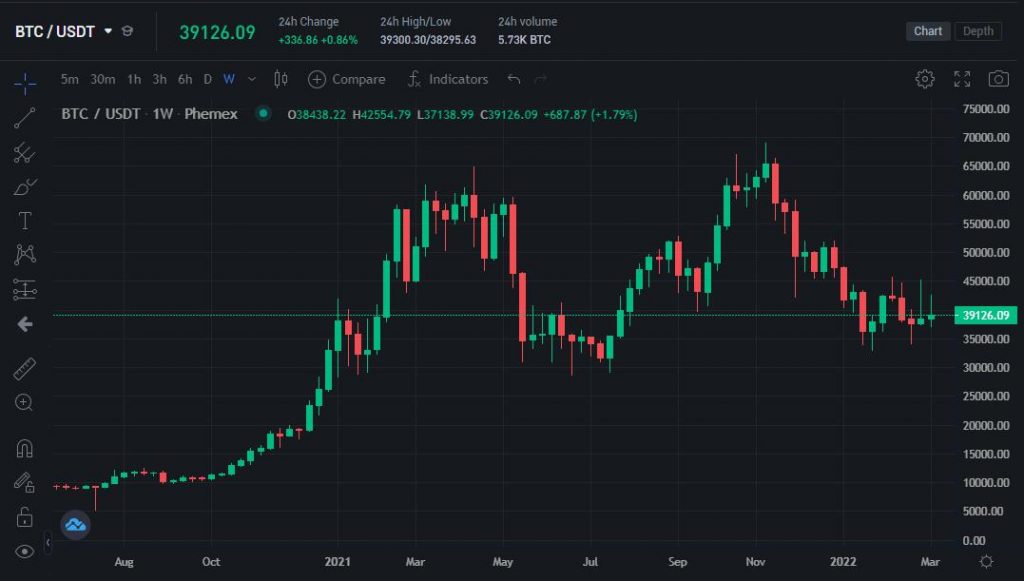 The chart doesn’t have indicator lines. Press on “Indicators” at the top and search for “Chande Kroll Stop”: 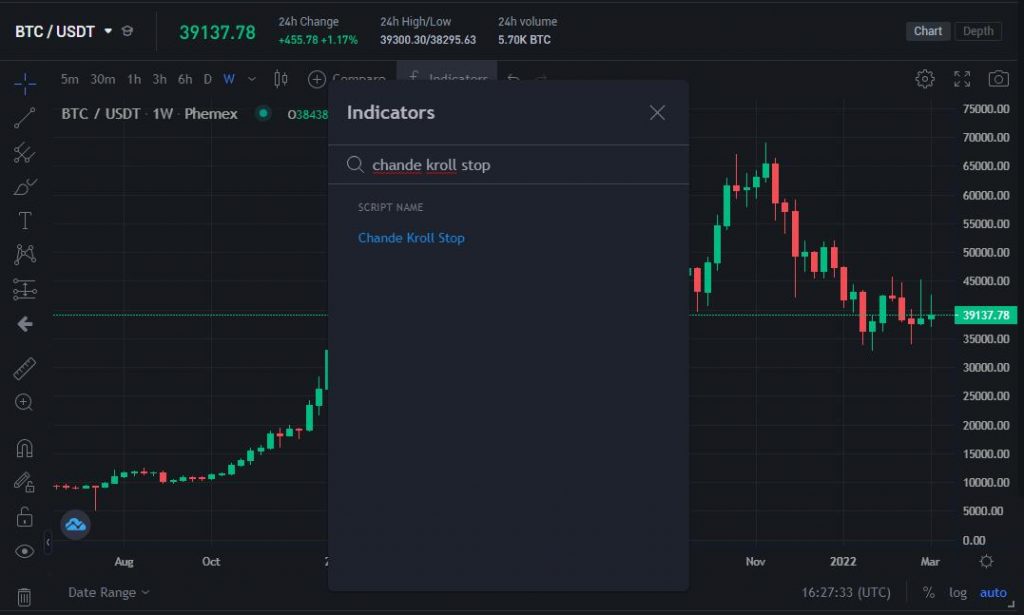 The indicator search engine searching for Chande Kroll Stop among hundreds of indicators.

Left-click on the indicator and it will automatically load on the chart: 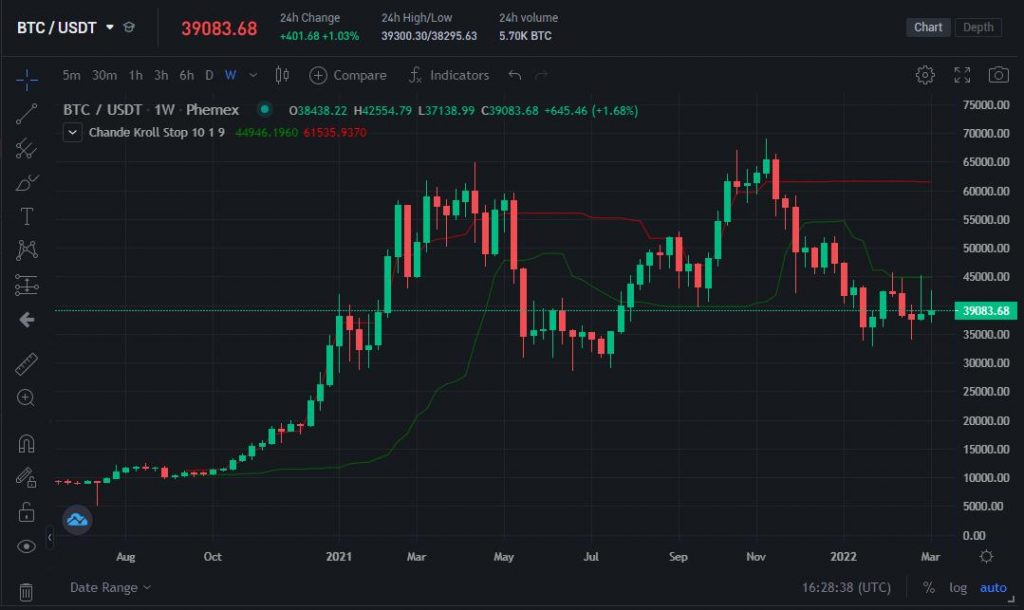 The Chande Kroll Stop Indicator is now active on the Bitcoin chart.

The green and red lines are now visible on the chart – showing us the average take-profits and stop-losses. The indicator also provides optional settings, accessible by tapping over “Chande Kroll Stop” at the top-left and then pressing on settings: Traders can adjust Chande Kroll Stop settings such as time and market volatility.

This allows us to modify the P, X, and Q values as stated in the formula section. The P value is the most important value because it signifies time and by default it is set to 10. We’re trading on the weekly (W) chart and the current lines are drawn for an average movement of 10 weeks. If we press the daily (D) chart, we’ll get a new set of lines: The Chande Kroll Stop indicator on the daily Bitcoin chart.

Bitcoin is trading beneath both green and red lines in this case too – the same as on the weekly chart. This indicates that it’s bearish at the moment but could reverse and present a buying opportunity on the daily chart.

A reliable Chande Kroll Stop strategy is to trade based on when the price is below or above both lines. It’s recommended to trade long-term charts like 1W or 1M to discover the true trend. The indicator will work on short-term price charts such as 12H or 6H, but it won’t be as accurate as on the weekly chart.

If we zoom-out over the last year, we can see how Bitcoin performed historically over the last 2-3 years and predict what we can expect in the future: 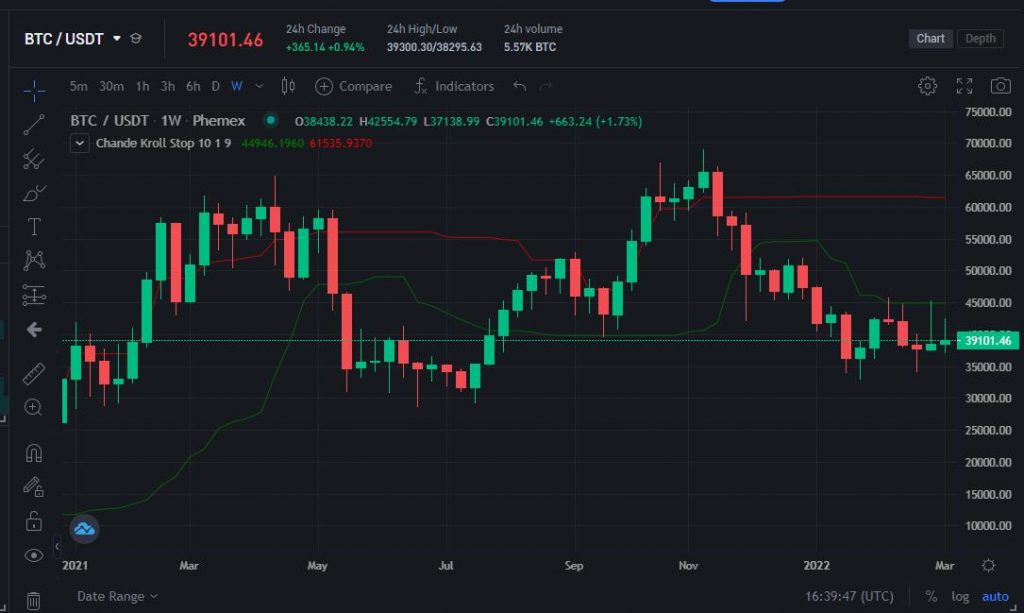 The times Bitcoin traded below the green and red lines.

Bitcoin fell below both Chande Kroll Stop lines in May 2021 when it had a major crash after it reached an all-time high of $60,000+.

The candles were trading below both lines for one month until the trend started reversing and Bitcoin recovered, and then made a new all-time high at $69,000. This leads us to believe that when Bitcoin crashes below both lines that it’s a great long opportunity.

If we analyze what happened when Bitcoin was trading above both lines, we can see that it promptly crashed. Bitcoin remained above the red line in March 2021 for almost two months before it started crashing and it was then on an uptrend for months.

If the red line crosses the green line and then goes above it, this is a sign of a bullish divergence to the upside: Chande Kroll Stop can be used on short-term charts.

On the 6 hour chart, we can see that Bitcoin gained a lot after the red line crossed the green line. However, it is not guaranteed that Bitcoin will perform like this consistently and it’s better to rely on long-term price trends before opening a trade.

Chandel Kroll Stop With Other Indicators The Chande Kroll Stop with the Chande Momentum Oscillator indicator.

The Chande Kroll Stop indicator is a simple indicator in which two lines are visible and marked in red and green, signifying critical resistance levels to the upside and support levels to the downside that the entire market is betting on.

Always combine the Chande Kroll Stop indicator with other reliable indicators such as Moving Average (MA) and Relative Strength Index (RSI) to confirm the trade will go according to plan. Avoid relying on one indicator exclusively as a risk-management strategy.

The indicator works in predictable ways and we recommend spending time experimenting with different time frames such as 4 hour, 1 hour, 12 minutes, and more. Analyze how the red and green lines cross on each chart and what they can do to the price action. If you notice patterns, this could give you a trade advantage over the market.