What are Chaikin Indicators: How to “Chaik-Up” Your Market Analysis

In the world of trading, great money movements are usually caused by the actions of large enterprises, or whales, as opposed to small traders and investors. If a trader can identify where the whales are going to direct the money to next, then they can make huge returns. This is why market indicators are so valuable for a trader’s technical analysis. These indicators can show the momentum behind a trend, whether the trend will be bullish or bearish, and whether there is likely to be a reversal, among other things. There are many indicators that a trader can choose from but one man who has contributed some of the most important is Marc Chaikin, the creator of the Chaikin indicators such as Chaikin Money Flow, Chaikin Oscillator and Chaikin Volatility. What Is the Chaikin Money Flow?

Chaikin Money Flow (CMF) is an indicator used to help traders determine the money flow volume and price of an asset over a specific period of time. Marc Chaikin, the creator of the Chaikin Money Flow (CMF) and Accumulation Distribution Line (ADL) indicators, believed that not all price moves are created equal — with those movements with large volume or momentum behind them being stronger and those with lesser movement or momentum being weaker. Thus, in the early 1980s, he developed the CMF indicator.

How to Calculate the Chaikin Money Flow Indicator?

To calculate the Chaikin Money Flow Indicator, Chaikin compared two key components of an asset’s value (price and volume) over a period of 20-21 days (a month’s worth of trading days). It should be noted that for day traders this period is reduced to 20-21 bars, instead of days.

To turn this information into something resembling an indicator, Chaikin used it to calculate the stock’s volume-weighted closing performance over that 20/21-day period (for the purpose of simplicity, we will use 21 days in this article). This he achieved in the following way:

With the final formula appearing as follows:

The resulting values, which represent a volume-weighted average of the asset’s buying power vs selling power, show a continuously oscillating pattern, ranging from +100 to -100 and continuously crossing the 0-line. This oscillating line is known as the Chaikin Money Flow indicator.

As with most indicators, the CMF indicator has a 0-line, which is used as the point where an asset’s value is considered to pass between strength and weakness in the market. The principle behind the CMF is simple. These clear colors make it easy to spot a few indications from the off:

When the green or red regions remain persistent for a long period of time, this can be an indication of money flow persistency. In this case, it can mean that there are signs of accumulation or distribution by large institutions that could disproportionately affect the asset’s value in the future — either for a bullish or bearish trend. This is important to consider as it can direct your trades; backtesting has historically shown better performance from those bullish stocks confirmed by strong money flow persistency.

Generally, the CMF will follow the direction of an asset’s price chart — going up when it rises and going down as it decreases. However, when the price is seen as rising in the asset’s price chart but the money flow remains negative in the CMF indicator, or vice versa, this indicates a divergence. A divergence can be:

The divergence indicator is important as it can warn of a trend being about to turn. In particular negative/bearish divergences can be indicative of an increased risk of a short-term reversal in the asset’s value. 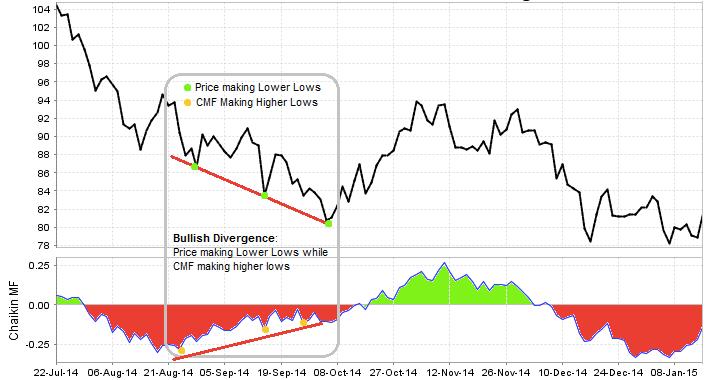 An example of a bullish divergence, as shown using the CMF indicator and a price chart. (Source: topstockresearch.com)

What Is the Chaikin Oscillator Indicator?

There are many other indicators that stem from Chaikin’s CMF. One that is often used, is known as the Chaikin Oscillator (CO) indicator.

The CO indicator is used to measure the momentum behind the accumulation distribution of an asset, meaning that it can give an indication of upcoming trends and help predict their strength. The CO indicator is in fact an indicator of an indicator, being that it is the difference between a 3-day exponential moving average (EMA) of the asset’s ADL and a 10-day EMA of the asset’s ADL. For clarity, an EMA is a moving average (MA), this being a calculation of the average price that an asset is moving at, with more weight assigned to more recent prices.

How to Calculate and Read the Chaikin Oscillator Indicator

The calculation of a Chaikin Oscillator follows a similar path the CMF indicator, with some added steps. It is calculated as follows:

The Chaikin oscillator indicator is represented by a solid line that oscillates between the highs and lows of the asset, passing over the 0-line in accordance with the asset’s momentum. A representation of a Chaikin oscillator indicator (blue). (Source: Phemex.com)

The Chaikin Money Flow (CMF) and Chaikin Oscillator (CO) are often confused, but in fact when looking at the Chaikin money flow vs Chaikin oscillator indicators, we can establish a clear difference: 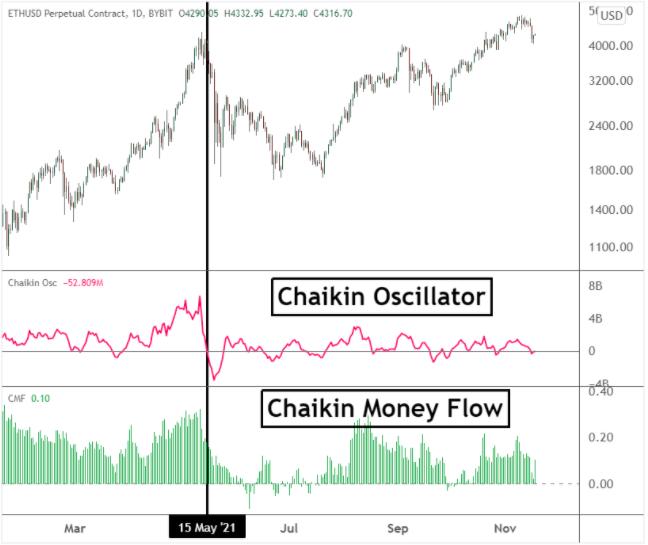 CO vs CMF. Notice how the CO traverses the 0-line before the CMF does. (Source: earn2trade.com)

How To Use the Chaikin Money Flow Indicator

The Chaikin Money Flow indicator is a tool found on many market analysis platforms, such as on Phemex’s partner TradingView. To use the CMF then, a trader will first go to one of these platforms, find the asset they want to analyze, and then add the CMF indicator. Once this is done, the trader will analyze the asset’s value using the indicator and come up with a Chaikin money flow indicator strategy to increase chances of profitability.

Regardless of the strategy, however, a trader should never solely rely on one indicator, whether the CMF or not. It is important to always use additional indicators to verify and confirm one’s analysis before deciding on whether to go short or long, as well as how much to invest or sell.

Some indicators that are similar include:

What is Chaikin Volatility?

The Chaikin Volatility (CV) indicator is used in technical analysis to measure volatility — hence the name. This is done by using the rate of change (ROC) formula to compare the spread of the high and low pricing across an asset’s value. To have a better idea of the CV indicator, one can think of the Average True Range (AVT), with the difference that it ignores the asset’s previous close price.

Volatility is a great indicator of the market, with higher volatility suggesting unease from investors and lower volatility being an indicator of calm in the market. This can help influence a person’s investing decisions and is thus important to consider alongside other indicators during technical analysis.

How to Calculate the Chaikin Volatility Indicator?

The Chaikin Volatility indicator is calculated in the following way:

Chaikin’s indicators, including the Chaikin money flow, can be used in crypto as well as for securities trading, since the benefits from this market analysis tool remain the same. The CMF, CO, OBV, MFI, and other indicators are all fantastic tools to help a trader understand whether a price movement is likely to be sustained, how strong the momentum will be, and in which direction the buying/selling pressure is going. However, no matter the strategy employed, a trader should always back up and verify their findings through the use of multiple indicators. A trader may therefore want to use the valuable Chaikin indicators in combination with such technical indicators as moving averages (MAs), the parabolic SAR, Average directional index (ADX), relative strength indicator (RSI), stochastic oscillator, and other price analysis technical indicators and tools.