DMI and ADX Indicators: How to Trade Crypto With The Trend Indicators 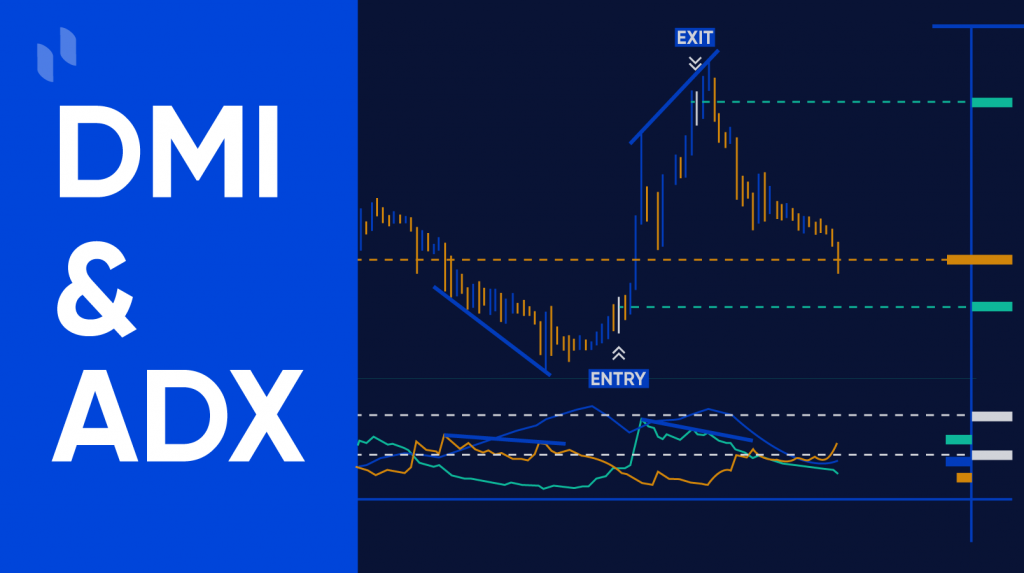 The Directional Movement Index (DMI) is a technical indicator used by traders to help identify the strength of an uptrend or a downtrend in the market. It comprises two directional indices and is typically used in tandem with the Average Direction Index (ADX). Therefore, DMI is shown as three lines above or below your candlestick chart.

What is DMI (Directional Movement Index)?

By themselves, the DMI indices don’t tell you an awful lot that you couldn’t figure out by looking at a standard candlestick chart. Some traders use the crossover points as a trading signal as they indicate a trend reversal. However, the DMI indices also comprise a third line, called Average Direction Index (ADX.)

What is ADX (Average Direction Index)?

The ADX provides an indicator of the relative strength of the directional trend indicated by DI+ and DI-. To read it, refer to the axis on the chart, which shows a value. In general, an ADX value above 25 indicates that the trend is relatively strong. A value below 20 indicates that the trend is weak or that the markets are trading sideways. It may also be the case that the markets are undergoing a period of volatility, and the ADX can’t discern a clear trend in either direction.

The DMI and ADX values are determined based on the range of price movements during the last 14 trading periods. There are mathematical formulae that will allow you to calculate the values yourself; however, this is complex and largely unnecessary for most traders. All you need to know is how to interpret the DMI and ADX values on a chart and use them in your trading signals.

How to Use DMI and ADX in Trading

If you’re planning to use the DMI and ADX in trading, then there are two critical indicators you’ll be looking for. The first is the point when the DI+ and DI- lines cross over one another, which indicates that a trend reversal is in progress.

However, you should be wary if the DI+ and DI- lines have already crossed over several times in the preceding trading periods or are progressing very close to one another, as this indicates that the markets are undecided and neither bulls nor bears are in control. The further apart the DI+ and DI- lines are, the stronger the indicator of the trend.

Observe the chart below. The red line is the ADX, the blue line is the DI+, and the orange line is the DI-. The blue boxes show a clear bearish trend, which is most easily seen in the candlestick chart. However, if you look at the DMI chart at the bottom, this bearish breakout is visible by the fact that the orange DI- line has diverged sharply from the blue DI+ line. If you’re looking to make a trade based on the crossover signal, then the point indicated by the arrow would be where to enter a short trade, as it shows an evident bearish trend. 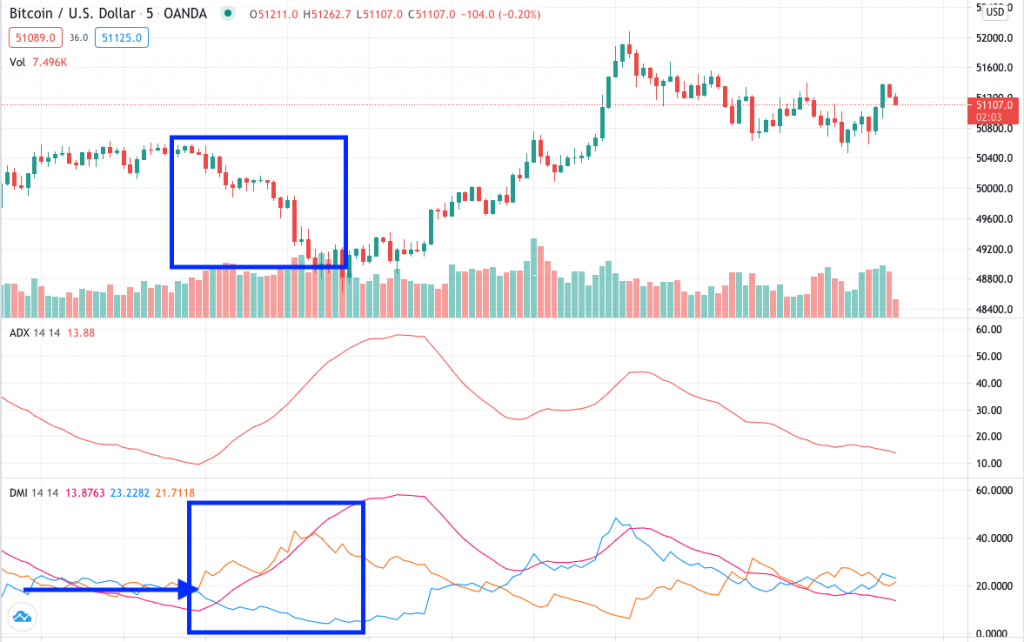 However, the ADX provides a clearer indicator of the strength of the trend. If you’d placed your trade at the point of the arrow, the ADX was still below 20, which indicates that the trend isn’t particularly strong. Although it did turn out to be that way, a more risk-averse trader would probably have waited for the ADX to confirm the bearish trend by opening their short position a little later, per the purple arrow on the next chart. Here’s another example, showing the opposite scenario with a bullish breakout. In this case, you can see the bulls have taken control of the markets, and the blue DI+ line has started to diverge from the orange DI- line. If you were using the crossover indicator, you’d enter your long position where the blue arrow is pointing. However, if you wanted further assurance that the bulls really have taken control, then you’d have waited a little longer until the ADX line was confirming the strength of the trend, shown by the purple arrow below.

In this case, the trend was longer and more pronounced, so if you had entered a bit later, you would have still made a very healthy profit.

Risks and Limitations of Using DMI and ADX

Firstly, DMI and ADX are lagging indicators. They’re based on past market movements and may not be the most reliable predictors of future direction. Furthermore, as a lagging indicator, they may allow you to open a trend at the point market conditions change, but if you’re also using them to close a position, then the chances are that the markets will already have started to move against you by the time the DMI and ADX give you enough information to know you should close it. They’re also not particularly useful in knowing where to set your stop-loss or take-profit.

Although the ADX value of 25 can confirm a strong trend, it may not remain above 25 for long. If you’ve been waiting for it to hit 25 and place your trade immediately, it could then drop down below again, and the markets may move against your position.

In general, if you want to trade based on trend indicators, it makes sense to use DMI and ADX together with other analytics such as MACD. This will give you a more reliable view of the trend before you place your trade.

Where Did DMI and ADX Come From?

DMI and ADX were developed in the 1970s by American technical analyst J. Welles Wilder, author of “New Concepts in Technical Trading Systems.” He invented several technical indicators that are now used by traders worldwide, including the Relative Strength Index and the Parabolic SAR.