Is Cryptocurrency a Security? – Clarifying the Legal Status of Crypto

Over the last few years, cryptocurrency has become a popular financial asset class. It is now traded on a massive variety of platforms, both centralized and decentralized.

The traditional finance exchanges have also started offering crypto-based products such as Bitcoin futures. The confident march of cryptocurrency towards wider acceptance by traders raises an important question – is cryptocurrency a security? If not, how should this new asset class be classified? What Is a Security?

In the context of investment finance, a security is a tradable financial instrument used to raise capital by the organization issuing it. Securities are issued by governments and businesses and come in three main varieties – stocks, bonds, and derivatives.

Stocks are the most commonly used securities. Buying a stock of a company makes you a part-owner of it. By becoming a part-owner, you share the risks and rewards linked to the company’s performance. Stocks do not guarantee you a fixed income in return for your investment.

If the company underperforms, each share of the stock you own may depreciate in price over time, leading to a capital loss. If, on the other hand, the company does well in the market, you may expect your shares to rise in value, delivering you a capital gain. In addition to the capital gain, as a shareholder of a successful business, you may expect income from dividends.

Stocks are traded on highly regulated stock exchanges. There are approximately 60 of these exchanges around the world, with the two largest ones being the NASDAQ and the New York Stock Exchange (NYSE). 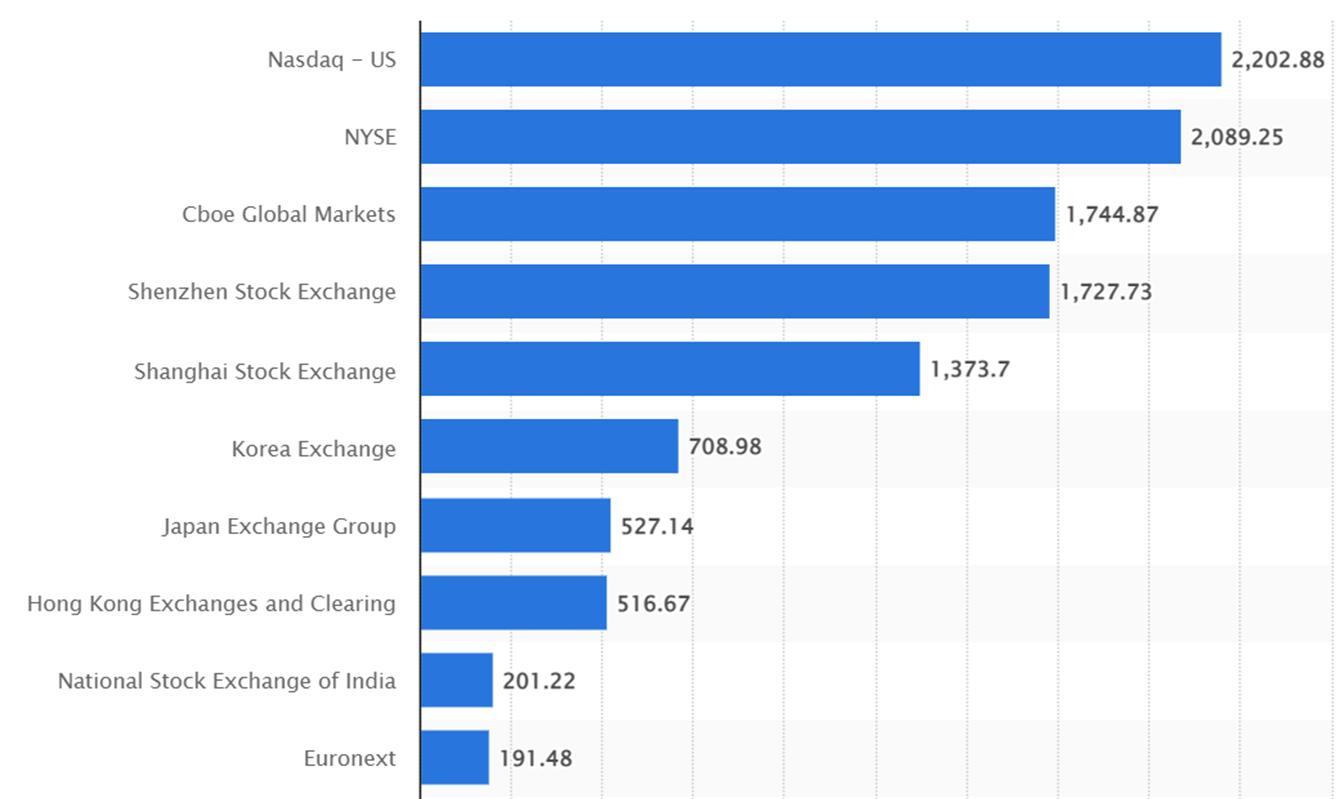 Stock trading in the US is regulated by the Securities and Exchange Commission (SEC). Additionally, the non-government Financial Industry Regulatory Authority (FINRA) also oversees the activities of brokerages trading on the US exchanges.

Bonds are another type of security. Bonds are issued by governments and businesses to raise capital in the form of debt. By buying bonds, you are entitled to fixed regular payments from the bond seller regardless of the seller’s market performance.

While stocks make you a part-owner of the security issuer, bonds represent capital lent by you to the issuer for the duration of the bond contract. While corporate bonds are a widely-used financial product, bonds are commonly associated with government-issued securities.

There are three common bond products in the US – treasury bonds, treasury notes, and treasury bills. All three are backed by the US government and thus, are considered a very low-risk investment. Therefore, these products typically pay relatively low interest.

The primary differences between the three treasury bonds are the maturity periods and interest rates paid. Treasury bonds are a long-term investment. They have a maturity between 10 and 30 years and pay higher interest than notes or bills.

Treasury notes have maturities between two and 10 years and pay somewhat lower interest than treasury bonds. Treasury bills have the shortest maturities of the three products, between four and 52 weeks. They also feature lower interest rates compared to notes and bonds.

Governments in other countries also offer bond products to raise capital from the market. For instance, the UK government’s bonds, called Gilts, have maturities between five and 30 years. The Japanese government issues Japanese Government Bonds (JGBs), bond products with maturities ranging from two to 40 years.

While stocks are mostly traded on stock exchanges, bonds are often traded over the counter.

Derivatives are the third security category. Derivatives are financial products based on other underlying assets which they derive their value and terms from, hence the name. Derivatives may be based on stocks, bonds, commodities, market indices, foreign currencies, cryptocurrency, and more.

Derivatives are often structured in a complex way based on a potpourri of underlying assets. Unlike stocks and bonds, derivative trading is only advisable if you have significant experience with this product.

There are three common forms of derivatives – futures, forwards, and options. Futures are the most widely-used form. They represent a financial contract between parties to trade a certain asset at an agreed price on an agreed future date.

Forwards are similar to futures but are typically traded between two parties rather than on the exchange.

Options also have similar characteristics to futures, as they represent an agreement to buy a certain asset at some price on a future date. However, options, as their name implies, do not represent a binding agreement. By buying an option, you have the choice, but not the obligation, to buy the asset at the stipulated price and date.

In the US, derivative markets are regulated, in addition to SEC and FINRA, by the Commodity Futures Trading Commission (CFTC). Derivatives are commonly traded both on the exchange and over the counter.

Cryptocurrency is an asset class that is not defined as a security and has its own specific properties. While securities, particularly stocks, have been the backbone of traditional financial markets, cryptocurrencies are largely traded on crypto exchanges. While the main media of securities circulation are stock exchanges, brokerages, and investment funds, cryptocurrencies are largely circulated on blockchain platforms and crypto exchanges.

Is Cryptocurrency a Security?

In most countries, including the US, cryptocurrency is not considered a security. The US government has stated in 2018 that cryptocurrency cannot be classified as a security under the existing securities law. The SEC Chairman, Jay Clayton, stressed during an interview that the government does not plan to amend the law to accommodate cryptocurrencies.

There are three key reasons why the government is unlikely to define crypto as a security:

How Is Cryptocurrency Classified?

If cryptocurrency is not recognized as a security, then the question is how to classify it. The US government, while being unequivocal on non-recognition of crypto as a security, has been less clear on the precise asset class for crypto.

The abovementioned SEC Chairman, Jay Clayton, in his 2018 interview, opined that “Cryptocurrencies: These are replacements for sovereign currencies, replace the dollar, the euro, the yen with bitcoin.” By that definition, cryptocurrency is a type of foreign currency.

However, a year later, another government official in charge of the financial markets’ regulation, CFTC Chairman Heath Tarbert, stated in an interview that cryptocurrency is considered a form of commodity by the government. Indeed, the CFTC regulates Bitcoin and other crypto futures, similar to its regulatory activity with regard to conventional futures.

The two divergent opinions above demonstrate that the government is far from being able to clearly classify cryptocurrency. On the balance of the available information, we might assume that cryptocurrency is most likely a commodity in the view of the US government, since:

What Are Security Tokens?

Starting from 2017, many crypto platforms have issued security tokens, in addition to the transactional and utility tokens underpinning their operations. This has been largely driven by the intent to stay on safe legal ground during ICOs, and attract more cautious investors.

The platforms issuing the security tokens also hope to have these crypto assets recognized as securities by the government. The key question with regard to these tokens is – can they be considered a security by the government?

Unfortunately, the US government has been as coy about these security tokens and ICOs as it has been about the overall cryptocurrency concept.

In December 2017, Jay Clayton posted a statement on cryptocurrencies and ICOs on the SEC’s website. In a long piece of content, Clayton provided no clear answer to whether the security tokens used in ICOs may be considered securities under the law. He added further confusion by stating that some tokens in some cases may possess some properties of a security.

The article concluded with a disclaimer that all the information in it was Clayton’s own views and did not constitute the definitive view of the government.

The inconclusive opinion by the SEC, along with the government’s outright refusal to consider cryptocurrency in general as a security, suggests that even the security tokens are unlikely to be considered securities by the US government.

Most governments in other developed economies have also either rejected cryptocurrency as a security or have provided inconclusive opinions without enacting any supportive laws.

Cryptocurrency’s increasing acceptance and profile in the trading world has raised an important question of whether it could be considered a security. Securities are defined as financial instruments used by companies and governments to raise capital. The three common security types are stocks, bonds, and derivatives.

The US government has not recognized cryptocurrency as a form of security. While there is still a lot of confusion with regard to crypto’s legally defined asset class, on the balance of information, it may be considered a commodity.