What are CryptoPunks: One of the First NFTs on Ethereum 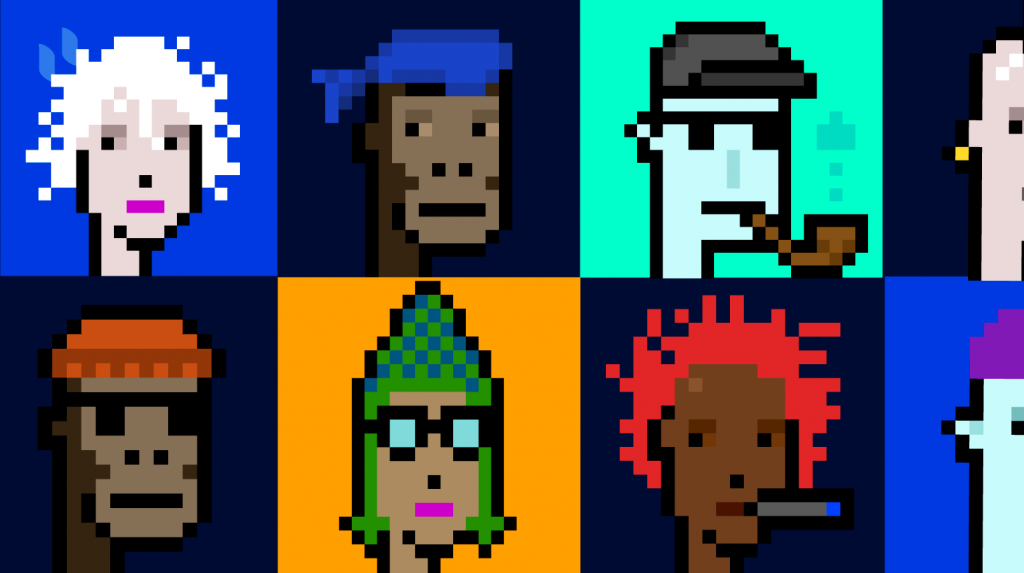 Released in June 2017 by Larva Labs, CryptoPunks are the first non-fungible tokens (NFTs) on the Ethereum (ETH) blockchain. Currently, the cheapest Punk trades at 15 ETH, worth around $41,000, while the most expensive Punks are worth millions. There are a total of 10,000 CryptoPunks, and the project has generated a total of around 184 thousand ETH, worth approximately $508 million.

CryptoPunks is a set of 24×24, 8-bit-styled pixel NFT art showcasing 10,000 digital characters with various unique traits. The inspiration for CryptoPunks comes from the London punk movement in the 1970s and the cyberpunk genre. They are not used as governance tokens or for staking, just crypto art considered as collectibles.

The core idea was that every Punk should be unique. Each one was algorithmically generated through computer code and has a different level of rarity depending on its type and attributes. There are 6,039 males, 3,840 females, 88 green-skinned zombies, 24 apes, and 9 light-blue-skinned aliens, making alien Punks really rare.

Every crypto punk also has its own profile page displaying its accessories, like beards, hairstyles, shades, hoodies, and so on. Like Punk type, some accessories are rarer than others. For example, only 44 punks wear a beanie, and some attributes are gender-specific. The beanie is only for male Punks, while orange sides are only for female Punks.

How do CryptoPunks work?

Unlike Bitcoin’s (BTC) fungibility, CryptoPunks are non-fungible, which means they are unique, irreplaceable, and not interchangeable. As a set of tokens, CryptoPunks does not have its own blockchain network and was instead created on the Ethereum blockchain, in which the transaction history and token metadata are publicly verifiable, allowing users to prove that they own NFTs like CryptoPunks.

The composite image of all the punks is too large to be stored on the blockchain, so Larva Labs took a hash of the image and stored it in the contract. The CryptoPunk authentication process involves calculating the SHA256 hash on the individual CryptoPunks images and comparing the result to the hash embedded in the contract.

Who Is Behind CryptoPunks?

Larva Labs, an American studio consisting of Canadian software developers Matt Hall and John Watkinson, created CryptoPunks. The project started out as an experiment and managed to ride the popularity coming from NFTs.

At the time of release, the current ERC-721 token standard used by most modern NFTs did not exist. The developers had to use the existing ERC-20 token standard instead. Watkinson has stated that he and Hall had modified the standard to represent each of the Punks as an individual and unique token rather than a fungible token. The collection of crypto art possibly served as the inspiration for the ERC-721 token standard, which is a free, open standard that explains how to build NFTs.

How Can I Get a CryptoPunk?

The CryptoPunks tokens were originally released for free, and anyone with an Ethereum wallet could claim their own Punk. Out of the 10,000 Punks, the developers kept 1,000, now called “Dev Punks”. The other 9,000 Punks have since been claimed, and to own one now, a buyer must purchase one from someone via the Larva Labs marketplace. As mentioned, this collection predates the ERC-721 standard for NFTs and the modern crypto art movement. As a result, most of the CryptoPunks are sold only in the Larva Labs marketplace.

Guide to buy and sell CryptoPunks

Up till now, 277 CryptoPunks have made their way onto OpenSea, the world’s first and largest digital marketplace for crypto collectibles and NFTs. Rather than the original modified ERC-20 token standard, these CryptoPunks are wrapped as ERC-721 tokens, making them tradable on other NFT marketplaces. The wrapping process takes place on the website Wrapped Punks. The same website can unwrap and return them to their original form.

When CryptoPunks was released in 2017, each Punk sold for the equivalent of $1 to $34. As interest in NFTs blew up, the Punks became rare collectibles, and are now worth up to millions of dollars. Their value received a generous boost due to sharply increasing interest in NFTs starting in February 2021. 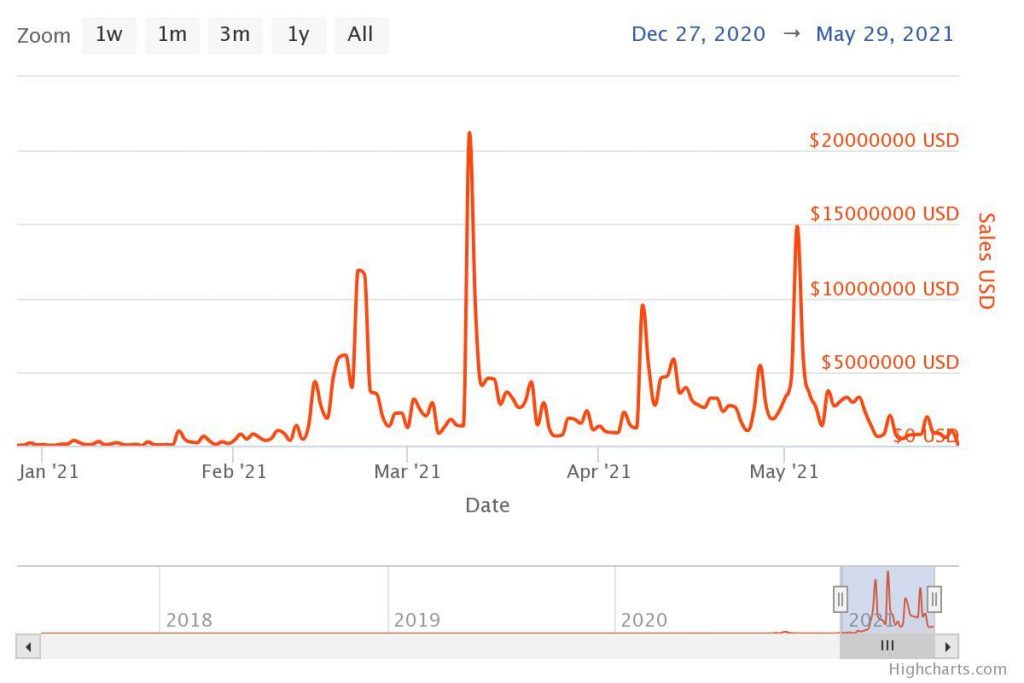 Total USD spent each day on completed CryptoPunks sales from January 2021 to May 2021. (Source: NonFungible)

In mid-March, there were 3,596 completed sales with a total value of around $257 million. On March 11, two light-blue-skinned alien Punks, #7804 and #3100, sold for around 4,200 ETH each, worth a total of $15 million. The two hold the current record for the highest-selling CryptoPunks in the collection.

On May 11, Larva Labs put up a set of CryptoPunks for traditional auction on Christie’s. The set consists of nine Punks selected from the 1,000 Dev Punks and was estimated to be worth $7–9 million before selling for almost $17 million.

As a set of NFT collectibles, CryptoPunks ranks 2nd in terms of all-time sales volume. Currently, the floor price for CryptoPunks is 15.3 ETH, worth around $38,000.

What Is the Future for CryptoPunks NFT?

The value of CryptoPunks is closely intertwined with the public’s perception of NFTs, and the NFT hype has largely simmered down since February 2021. According to one market research site, the weekly trade volume and number of NFT transactions in the last month have decreased by nearly 75%. Analysts believe this could simply be a market correction, and for some, a 75% correction for cryptocurrency is not unusual. Of course, there are also analysts that believe the NFT bubble will burst.

Even if the bubble does burst, the underlying technology still has value. NFTs are very popular as creative works and collectibles because they offer solutions to issues faced by the art world. On the blockchain, the owner’s identity and token metadata can be added to an NFT. It is nearly impossible to manipulate the data and steal the ownership. The data is also decentralized and publicly available. Anyone can look up the token’s information and verify the ownership status. Moreover, NFTs can be traded peer-to-peer where creators can sell their work directly, allowing them to avoid fees and earn more profits.

CryptoPunks’s history as one of the first NFT projects on the Ethereum blockchain would make it part of the rarest crypto art collectibles. As NFT technology adoption grows and more NFT projects are released, the value of CryptoPunks may rise as well.

CryptoPunks isn’t the only project occupying this new space. For one, there’s Hashmasks, a digital art collection with 16,384 unique digital portraits created by 70-some artists worldwide. Like CryptoPunks, Hashmasks are NFTs and live on the Ethereum blockchain.

The main difference between the two projects’ operations is how the rarity of each NFT is determined. A CryptoPunk’s traits and type determine its rarity. In contrast, the rarity of a Hashmask is not predetermined, and instead changes and adapts throughout the years.

This is achieved through Name Change Tokens (NCTs). Each day, the holder of a Hashmask gains 10 NCTs, and once they accumulate 1,830 NCTs, they can burn the tokens and change the name of their Hashmask. Due to the smart contract, each Hashmask must have a unique name, which gives it an additional layer of rarity.

CryptoKitties is another NFT project that works similarly to CryptoPunks, but with the addition of gamification elements. In the game, players can buy, collect, breed, and sell virtual cats. Each CryptoKitty carries a unique number and 256-bit distinct genome of different attributes that can be passed down from parents to offspring. The value of a CryptoKitty is determined by its rarity, utility, and appearance. In 2020, Dapper Labs announced that CryptoKitties would be switching to their self-designed FLOW blockchain. The CryptoKitties will be upgraded with more visual details, and the breeding of new kitties will no longer require transaction fees.

There are plenty of other similar projects, such as the National Basketball Association’s (NBA) Top Shot, Larva Labs’s Meebits, and Ubisoft’s Sorare. Along with CryptoPunks, these projects have helped push NFTs towards mainstream adoption.

CryptoPunks were among the original pioneers and revolutionaries in the NFT space. With the collection’s fixed supply and scarcity, CryptoPunks holds a significant place in NFT history on the Ethereum blockchain. When CryptoPunks were first released, the creators used it as a mass experiment to gauge people’s interest in NFTs and were unsure how this collection of pixel art would be perceived. Now it is one of the most popular crypto art collections on Ethereum and is serving as the inspiration for many other NFT-based projects.