What is Sorare: An NFT-based Fantasy Football Game

Launched in 2019, Sorare is a fantasy football (soccer) game in which players can buy, sell, trade, and manage a virtual team made of player cards represented as non-fungible tokens (NFTs). At the moment, the cheapest Sorare player card trades at 0.005 ETH, while the most expensive player cards are worth tens of thousands of dollars. 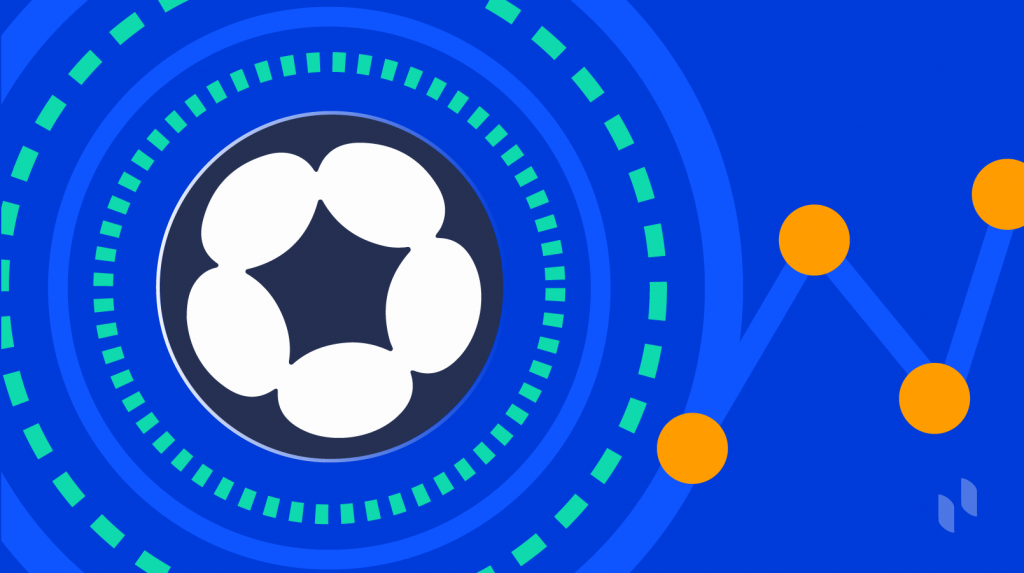 How do I get a Sorare card?

The game separates the player cards into tiers by scarcity — common, rare, super rare, and unique. Each card represents a real-life player, such as Cristiano Ronaldo or David Beckham. Every season, 100 rare cards, ten super rare cards, and one unique card are released. The rare, super rare, and unique cards can be bought, sold, and traded within Sorare. However, the common cards do not exist as NFTs on the Ethereum blockchain and cannot be leveled up, sold, or traded.

Managers use the cards to build a virtual team of five players, each of which must be represented by a different player card:

Managers can also appoint a team captain from all non-common cards.

What Do Sorare Cards Do?

Teams on Sorare earn points by participating and winning in leagues. Each card has a Player Score calculated according to the player’s real-life performance over the last five games, including statistics such as goals, assists, and penalties. To calculate a card’s Card Score, the Player Score is multiplied by card bonuses based on captain status, season, and experience points. Finally, each team’s total score is the sum of the five cards’ Card Scores.

How to make money on Sorare?

The game has nine leagues split into three different league structures – global, regional, and special. Each league has four divisions and managers can enter one team per division to compete in the weekly leagues and obtain prizes in the form of ETH and cards. Managers can then send the ETH rewards to their personal wallets through Sorare’s website.

Who Is Behind Sorare?

Sorare was founded in Paris in September 2018 by French developers Nicolas Julia (Co-founder and CEO) and Adrien Montfort (Co-founder and CTO). Julia and Montfort had been respectively the VP of Operations and VP of Engineering at Stratumn, a company providing enterprise-level blockchain solutions.

In May 2019, Sorare raised over $500,000 in a pre-seed round led by Seedcamp, Kima Ventures, and ConsenSys Ventures. In July 2020, a seed round led by e.ventures (now known as Headline) raised about $10 million for Sorare. The company then raised $50 million in February 2021 through Series A financing led by Benchmark, with additional funding from Headline, Accel, and other business angels.

Sorare has licensed players from 140 clubs across 31 leagues. The platform is authorized to use the portraits of Major League Soccer (MLS) players (but not the image rights of MLS and its clubs). The game is also backed by well-known players such as André Schürrle and Gerard Piqué.

As a set of NFT-based collectibles, Sorare currently ranks 5th in terms of all-time sales volume. So far, Sorare has more than 400,000 completed sales collectively worth around $82 million.

As NFTs started to gain traction in February 2021, the company experienced a historic activity peak near the end of the month. The total sales hovered around 1,000 per day in January 2021 and surged to around 6,000 sales per day by February 27. In March 2021, Sorare sold the world’s most expensive player card, a unique Cristiano Ronaldo NFT worth almost $290,000. However, as interest waned, the total sales volume and total sales gradually decreased and now hovers around $300,000 and 1,300 transactions per day. 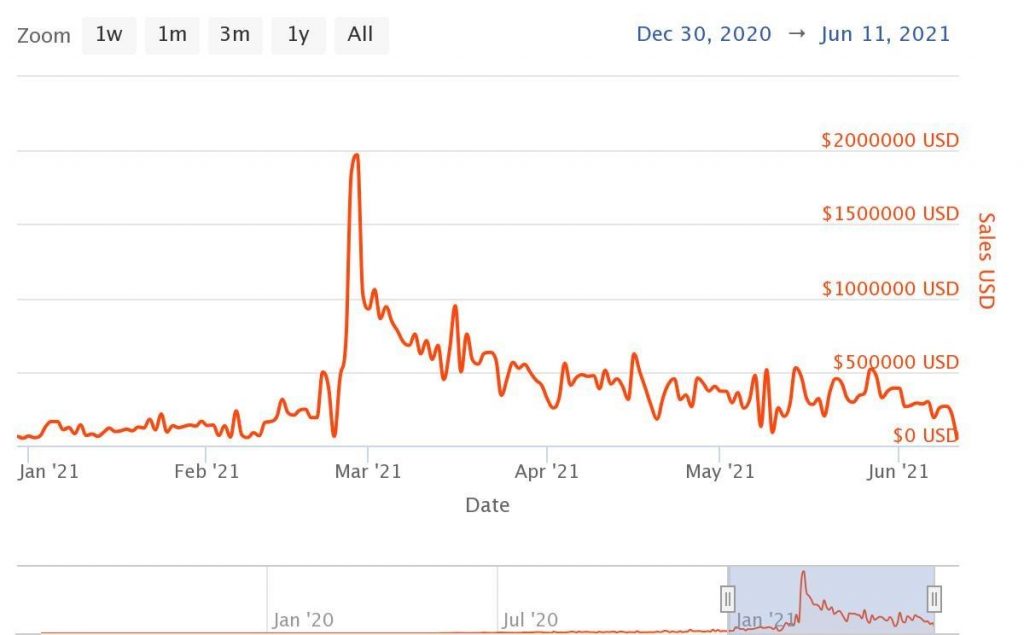 What Is the Future for Sorare?

Like all DApps on the Ethereum blockchain, Sorare struggles with high gas fees and slow transactions when the network is congested. To solve these scalability issues, Sorare will be embracing a Layer-2 solution. The company announced a partnership with StarkWave to utilize the zero-knowledge proof technology. With this Layer-2 solution, Sorare will group thousands of off-chain transactions into a single Ethereum transaction, enabling almost instantaneous transactions and near-zero gas fees. Sorare plans to launch this infrastructure by the end of July 2021.

Eventually, Sorare hopes to add all the clubs from the world’s top 20 leagues. With more clubs and leagues, the game will attract a larger community of football fans looking to obtain NFTs of their favorite players. To keep their player base engaged, the Sorare team also plans to feature longer tournaments and allow full-sized teams.

Some have expressed concerns that as the player base grows, the demand for higher-tier cards will increase, leading to high card prices. In response, Sorare has stated that introducing more clubs and leagues should keep prices low, but if necessary, the team will introduce a new scarcity level to rebalance the prices.

With each new season, the number of nearly worthless player cards increases. As players retire, their value decreases. Naturally, the player cards of legends like Cristiano Ronaldo retain relatively high value even after retirement, as the cards are considered rare collectibles. But for average and less well-known players, there is no such guarantee. For some substitutes and reserves that do not get to play at all, their player cards are useless as no data exists for Sorare to calculate the Card Scores.

Potential investors should also factor in the player’s real-life performance. Sudden injuries will result in a considerable drop in value, and transfers to leagues unsupported by Sorare will render the cards useless.

Who Are Sorare’s Competitors?

One of Sorare’s competitors is Fantastec SWAP. This platform distributes NFTs containing player videos and signatures for football clubs including Real Madrid, Borussia Dortmund, and Arsenal. Users can collect and swap crypto collectibles to complete collections, and compete to win prizes such as merchandise, signed memorabilia, and match tickets. Other than NFTs, the platform does not involve cryptocurrencies, as users buy card packs with fiat currency to participate in NFT-only trades. Unlike on Sorare, the Fantastec NFT cards do not hold any actual value and are purely for swapping purposes.

Also of note is a partnership that Australian developer Animoca Brands established in December 2020 with Manchester City and Melbourne City FC. Animoca, known for top blockchain-based games like F1 Delta Time, will be developing and distributing mini-games and official digital collectibles in the form of NFTs for the two clubs. As part of this partnership, Animoca is currently developing an NFT-based game that will reportedly allow NFT owners to sell their NFTs back to the platform after a cooldown period. This would mark the first time NFTs can be returned to a platform for a fixed and guaranteed amount rather than just being sold to other users. In other words, while Sorare users can get stuck with worthless cards that can’t be traded, users of Animoca’s game may have a reliable way out.

In addition, just this month, Porsche subsidiary Forward31 launched a platform where users can trade NFTs of sports cards. The project has partnered with the German Football Association. Users can trade NFT-based collectibles of players from the men’s and women’s national team, the U21 youth team, and the German third league. Unlike Sorare, this platform does not have any gamification elements and only focuses on collecting and trading cards.

So far, Sorare has managed to stay ahead of competitors with its well-established gamification elements and global appeal. The fantasy football game has already secured licenses with many clubs worldwide, while the above platforms all have fewer than five club partnerships. In addition, the trading-only platforms might have trouble maintaining their audiences, as they do not have any mechanics or elements to keep their audience invested in the long term. As such, Animoca’s upcoming game may be Sorare’s biggest challenger. There isn’t much information about its game design yet, but if it has similar player-versus-player mechanics, it might go head-to-head with Sorare in the future.

Sorare is a highly successful football-based NFT trading platform. With its gamification elements and rewards in the form of ETH and cards, Sorare keeps investors engaged. The Sorare team wishes to bring the game into the mainstream and is prepared to solve its scalability issues by incorporating StarkWave’s zero-knowledge-proof technology. With more clubs, leagues, and features to be added down the line, Sorare has plenty of potential as a platform built on one of the world’s most popular sports.